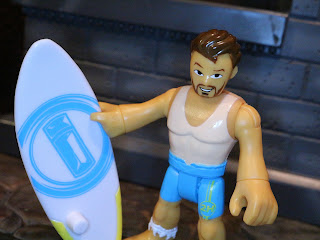 I've picked up every figure in the Imaginext Collectibles Figures Series and while I like most of them, every now an then there is a dud. For me those duds are usually the sports themed figures. I'm just not that interested in most sports in general and the designs tend to be fairly dull. Today I'm checking out what is referred to as the Tan Surfer, though I'll just be calling him the Surfer for the sake of brevity. Let's check him out after the break... 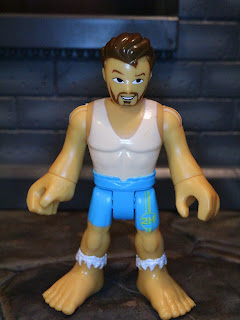 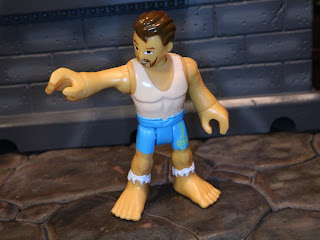 
* I'm always happy with the quality and the articulation on these little guys. While they're only about 2 7/8ths inches, they remind me a lot of some of the various toylines of the 1980s and 1990s due to the random character selection, the durability, and the accessories. 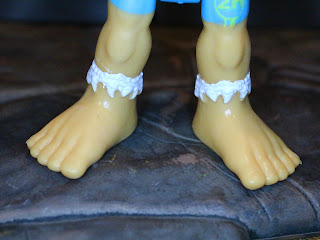 * This guy's fairly generic to me with the most interesting aspect being the shell anklets. Radical, bro. 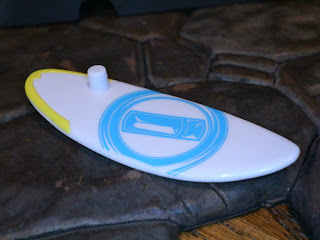 * The surfboard is not bad. A little dull, but the shape is good, the figure stands on it well, and the Imaginext "i" logo is prominent as part of the design of the board. 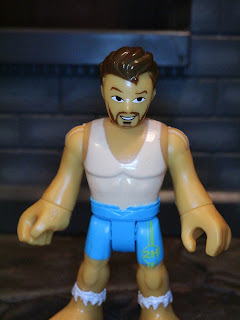 * The Surfer isn't a bad looking figure but he's just so dull. Tan shirt, jean shorts, and a regular looking dude-bro. Not much interesting going on here. I really wish Imaginext had made this guy a bit more interesting. 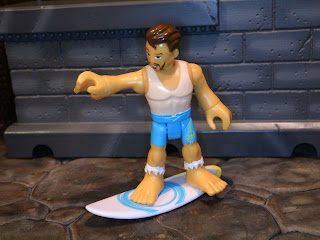 The Tan Surfer gets an Eh and a 1/2 from me. There's technically wrong with the figure but he's just dull and unexciting. Imaginext figures used to come with a lot of extra armor overlays or extra accessories that made even the duller figures more exciting. Imaginext has largely moved away from those and, frankly, it's a bit disappointing. Maybe it's been a cost cutting measure? Anyways, this guy's rather dull and fairly uninspired when compared to some of the stranger and more eclectic Imaginext figures out there. If you're looking for him (or want to avoid him) he's stamped as #61 on the package.


This is the first Tan Surfer I've reviewed. For more Imaginext Collectible Figures Series reviews check out the following: