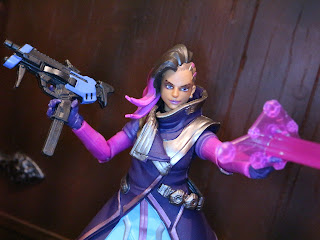 Hasbro is on a roll lately, aren't they? Marvel Legends and Star Wars: The Black Series continue to improve with every new release, they've now acquired the Power Rangers license and seem to be releasing some killer product there, and now they've jumped into a major video game license with Overwatch Ultimates. I'm going to admit right off the bat that I am not an Overwatch expert. I've never played the game although I am familiar with the characters as a number of them have become fixtures of modern pop culture. A little searching turns up the fact that these characters are pretty well developed, particularly for a game that is a team-based shooter. These little details remind me of the extensive backgrounds Larry Hama created for the G.I. Joe: A Real American Hero toyline. Sombra is a 30-year-old Mexican hacker named Olivia Colomar who uses her stealth, hacking skills, and machine pistol to deal damage to her opponents. For the past week or two GameStop has had a 20% off sale on Overwatch merchandise, so I jumped in and picked up Sombra to check these new figures out. Let's take a closer look at her after the break... 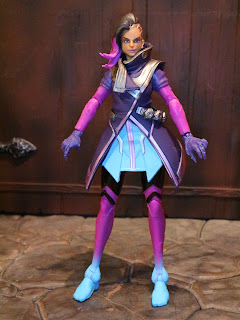 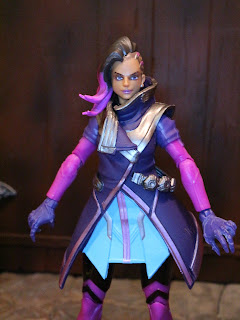 * The Overwatch characters have different "skins" (basically different palette swaps or outfits) that can be equipped to change their appearance. Sombra comes outfitted in her common appearance which consists of a large jacket over what seems like a tighter fitting stealth suit. Hasbro has nicely captured the vibe of the character design as these figures are bright, colorful, and feature completely new sculpts. Unlike Marvel Legends, there doesn't seem to be much reuse here unless they eventually release some of the alternate skins down the line. The figure is loaded with detail and looks incredible. 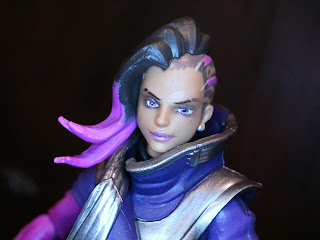 * Hasbro is using the face printing technique in this line as well, which means that these figures look nearly as good as the Marvel Legends and Star Wars: The Black Series releases. Sombra is quite lovely with some really cool cyberpunk styled hair. The left side of her head has much shorter hair and shows off the cybernetic implants she apparently had installed to augment her hacking abilities. 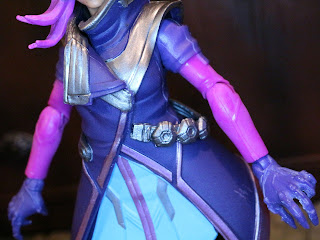 * Sombra is sporting a large coat that is actually a separate piece over a standard torso. The coat isn't removable (well, not without damaging the figure) but it does add an extra level of coolness to Sombra, also giving her a place to presumably stow away her cool gadgets. I love the little devices on her left side. Are those more translocators or perhaps mines of some sort? 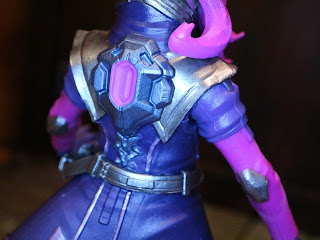 * Since Sombra's stealth abilities seem to be beyond just being able to move noiselessly (she actually can turn invisible) I'm guessing this device on her back might aid her in her espionage efforts. It's a cool detail and, again, adds another fun detail to check out on the figure. These toys are a joy to check out in hand as there are lots of cool little extras all over them. 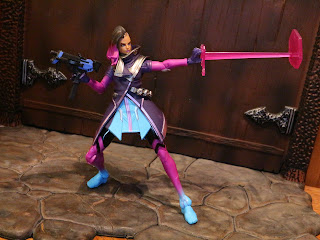 * The articulation is excellent. It might not be as good as Star Wars: The Black Series or some Marvel Legends figures yet but it's definitely in the same league. These are high quality, well articulated figures that feel sturdy and made for play and display. The range of motion could be improved in a few places but these are streets ahead of what most other mass market companies are putting out. 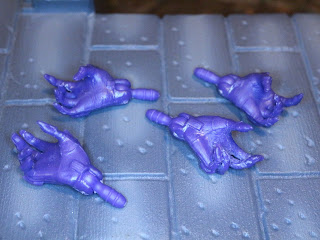 * Sombra comes with four interchangeable hands: Two designed for gripping her machine pistol and two designed for using her hacking ability. The gloves have lots of little cybernetic details on them, too, which are true to the character's design. 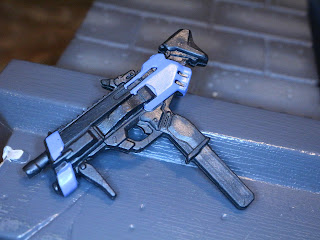 * Sombra is a damage dealer, so her primary weapon is a Machine Pistol capable of spitting out lots of bullets. Looking like a futuristic version of a Steyr TMP/ Brugger & Thomet MP9, this weapon has some really nice sculpting and additional paint applications that help it to stand out. 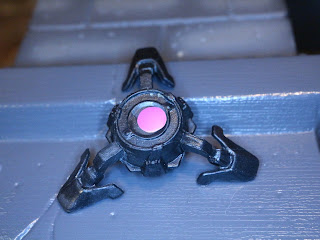 * Sombra also includes a Translocator, a device that she can toss out and automatically teleport back to as needed. This is a simple mine like device with a simple (somewhat off center) pink paint application, but it is a cool extra that just seems rather fun. I love accessories like this. 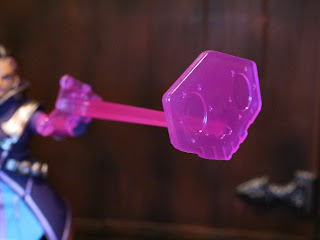 * Last, but not last, is Sombra's hacking beam. This translucent plastic piece is designed to give physical representation to Sombra's ability to hack enemies and shields and such. One end connects over her fingers and has little techy details on it while the other end has a skull design. The skull is the end that would hit her target, by the way. I like how Hasbro made sure to include various accessories to show off how the characters use all of their unique abilities. 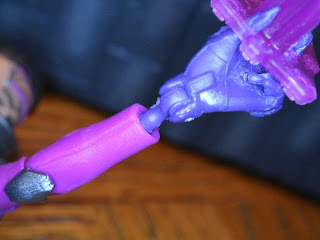 * The wrist pegs feel durable but they are very, very tight. Just try pulling them off with firm, even pressure or maybe even heat them up a bit for the first few times. 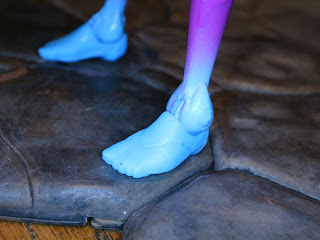 * Sombra is wearing these cool blue shoes that remind me of those FiveFingers shoes. They look great but the ankles are huge and look out of place. The definitely needed to be a bit more streamlined. 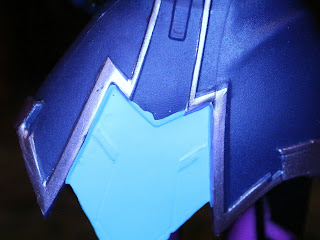 * Sombra's jacket definitely has a few messy paint applications, as can be seen here. This is on the back, so it wasn't really possible to see in the package. 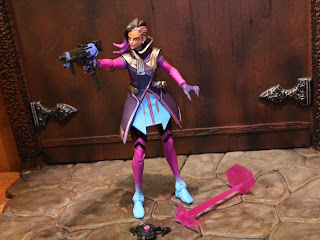 I picked up Sombra on a bit of a whim during the first week of the GameStop 20% off sale last week and I have to say that I'm not disappointed. Sombra is a very fun action figure with great accessories. Hasbro has done an excellent job here and it's nice to see them tackle a "smaller" license as they've been very focused on Marvel, Star Wars, and Transformers for what seems like years. I'm hoping this line succeeds as these are insanely fun and, from pictures I've seen, they look great on the shelf together. Sombra is a Great and a 1/2 figure and is well worth tracking down.