Action Figure Review: Stinkor #657 from POP! Television: Masters of the Universe by Funko 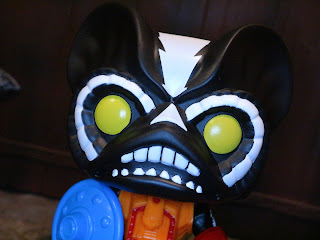 Today I'm checking out another Masters of the Universe POP! vinyl figure and this time it's Stinkor. Stinkor was the 2018 SDCC exclusive and was also released as a generic Summer 2018 convention exclusive version for FYE stores as well (the figure inside seems to be exactly the same). I still have a very vivid memory of my mom buying me the vintage Stinkor. This must have been in 1987 because I remember my mom taking me to see the re-release of Snow White and to McDonalds as well during the same trip. It's funny how stuff like that sticks out in your mind, isn't it? I hope my little one remembers stuff like that when she's older. Anyways, what's funny about Stinkor is that as a young child I never realized how often MOTU figures reused body parts and armor. Stinkor is a fully Frankensteined figure as he reuses Mer-Man's complete body along with Mekaneck's armor and a shield from the Castle Grayskull Weapons Rack. Add in some new colors and a wicked smell effect and you've got a brand new character! Stinkor is one of my favorites simply because of the novelty of his smell feature (patchouli oil was mixed into the plastic). Stinkor may trigger some smell memories for you, which makes him all the better. Let's check him out after the break... 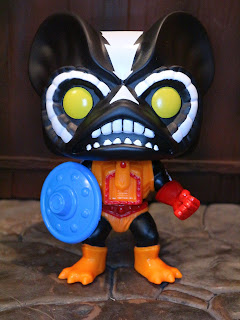 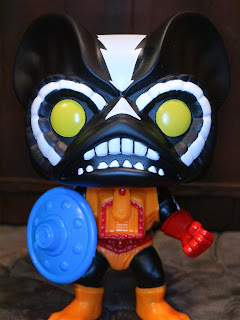 
* Stinkor looks fantastic. The bright, colorful look of the vintage Masters of the Universe toys is captured perfectly in the POP! aesthetic. Interestingly, while Stinkor's head looks like his vintage head, the Mer-Man POP! vinyl is completely different (it is based on the cross-sell art on the back of the package rather than the toy). 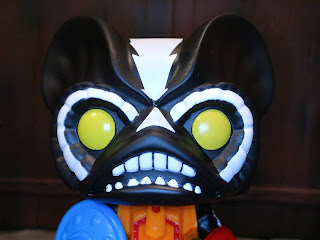 * I love how fierce the headsculpt is. Stinko's bright yellow eyes, pointy teeth, and black and white color scheme make him look just like a... something. The colors are skunk-like but everything else just looks purely monstrous. I love him, though. He's rather frightening  here! 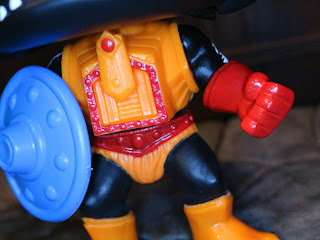 * Funko never made a Mekaneck but if they had, here's what his armor would have looked like. The armor and furry shorts are both excellent with very solid paintwork. Orange, red, and black really go well together. 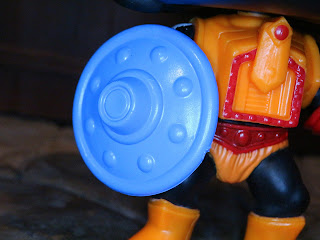 * Mattel repainted many of the Castle Grayskull Weapons Rack weapons to equip figures later in the vintage line (King Randor, Whiplash, Scare Glow, Webstor, Buzz-Off) and Stinkor included the shield from the set. Repainted in blue it made for an interesting accessory and provided some nice color contrast to the figure. It's included here, too, and it looks quite nice. Simple but effective. 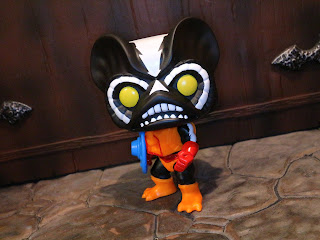 * Like most Funko POP! vinyls, Stinkor stands up straight, has a swivel neck, and is quite durable. Honestly, some of these make pretty good kids toys, too. 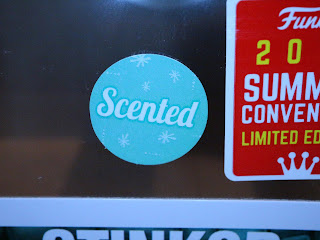 * My favorite thing about Stinkor is that he smells! I'm not sure that it's quite the same but the scent is very strong and possibly even a bit  more noxious than the vintage toy. I love weird stuff like that as it's part of what gives MOTU it's odd charm. 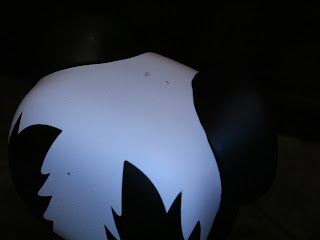 * Stinkor has some bright white paint applicatons on his head although there is, unfortunately, quite a bit of black paint slop on the top of the head as well. Unfortunate. 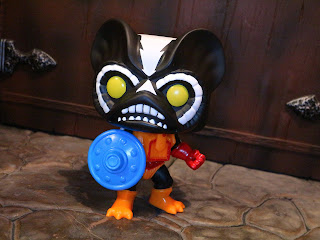 I'm so disappointed that it seems like Funko cannot make MOTU POP! vinyls anymore because they really do a good job with them. I'd love to see the line keep going as figures like Stinkor just further show how colorful and fun the characters from this franchise can be. Stinkor is another Great figure in this line. Shop around and hopefully you can still fine one at a reasonable price. There aren't many POP! vinyls I'd pay above retail for but some of the MOTU figures feel very, very special!

If you're a fan of Stinkor, the Evil Master of Odors, check out my review of the green Stinkor M.U.S.C.L.E. minifigure from the Series 2 pack.