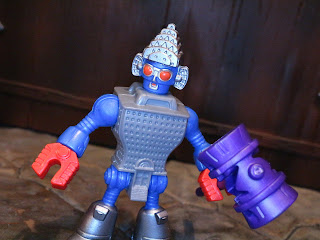 Today I'm checking out the second figure from Imaginext Series 12 and, man, does this one have a crazy long name: Empire State "Big" Robot Building. Yes, this is actually designed to look like the robot from the Tom Hanks film Big, which makes this figure another really, really strange homage in this toyline. This figure started showing up on international auction sites earlier this year which kind of tipped us all off that Series 12 was coming soon. What a strange choice for a figure, huh? I love how crazy Fisher-Price is with some of these releases and creating a toy in 2019 based on a toy prop from a 1980s Tom Hanks film just sounds crazy. Could a Zoltar be far behind? I definitely think that this figure, very clumsily called the Empire State "Big" Robot Building, is one of the two heavy hitters in this series along with the Adventure People inspired Black Clawtron Robot. Let's check this guy out more closely after the break... 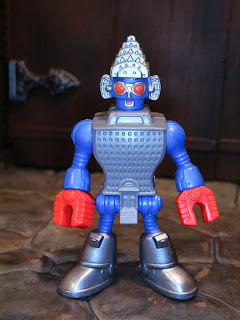 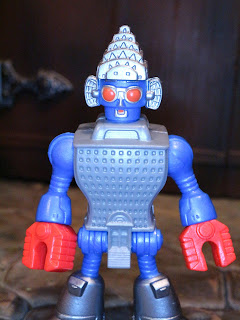 * The Robot is very, very accurate to the toy robot shown in the film. It looks like a crazy robotic version of the Empire State building complete with lots of windows, doorways (right around his robo-junk, oddly enough), red claws, and a great silver, blue, and red paintjob. 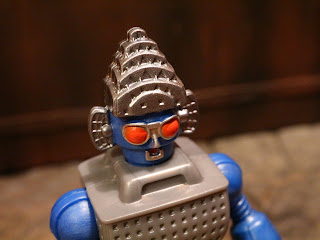 * The headsculpt is great and full of character. I love the sculpt and the detail, especially the weird ears and the expression. This guy looks kind of angry, doesn't he? 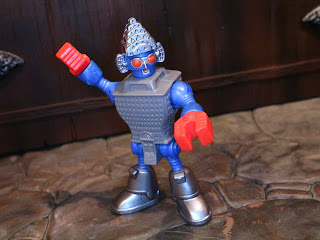 *  I'm always thrilled with the quality and the articulation on these little guys. While they're only about 2 7/8ths inches, they definitely are a throwback to many of the toylines of the 1980s and 1990s due to the random character selection, the durability, and the accessories. 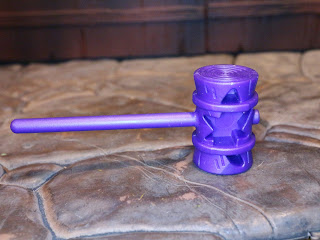 * While the Robot in the film doesn't seem to ave any accessories, Fisher-Price equipped him with a...large purple mallet? Yes, the giant Empire State Building shaped Robot includes a giant purple mallet. That's crazy! It looks good with the figure. The mallet originally came with the Imaginext Harley Quinn, so it's a reused piece. 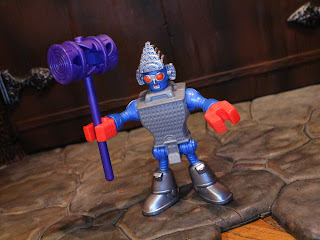 The Empire State "Big" Robot Building might sound more like an Ebay listing rather than the name for a toy but regardless, it turned out pretty cool. What a strange inspiration for a toy, huh? While the mallet is reused, the rest of the figure is all new. Well, except for the claws, the claws are reused, too. This guy is Great and just a lot of fun! I always love seeing how crazy and obscure Fisher-Price gets with these and this one definitely is crazy and fairly obscure. Even more fun! If you're looking for this guy, check for the #60 stamp on the bag.


This is the first version of the Empire State "Big" Robot Building I've reviewed. For more Imaginext Collectible Figures, check out the following: