Action Figure Review: He-Man from Masters of the Universe by Mondo 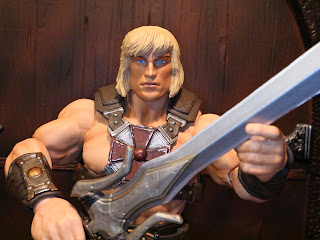 I have many, many He-Man action figures. Dozens, probably. Today I'm getting ready to review another one that is really unique and definitely should make you stand up and take notice: It's Mondo's He-Man from their new Masters of the Universe line of 1/6th scale action figures. While best known for posters and vinyl records, Mondo has been slowly working their way into the collector's market with released based on TMNT, Batman: The Animated Series, and now Masters of the Universe.  Mondo has indicated that they have some extensive plans for the line but He-Man is their first release. While He-Man is a 1/6th scale figure, rather than feeling like a Hot Toys release He-Man feels more like an oversized action figure with separate armor made from various mixed materials. It's a cool approach that works better for the barbarian-like clothes most MOTU characters wear as they're not usually wearing standard outfits. Another cool thing about this line is that rather than base the He-Man design off of one specific incarnation of the character, Mondo has designed their own take on the character. Like Sideshow's He-Man, this feels like it could be a possible movie inspired design for a fairly serious swords & sorcery Masters of the Universe film. He-Man has been shipping for a couple months now from some sources although Mondo seems to be taking their time getting these out everywhere. Let's take a look at this new Mondo version of He-Man after the break... 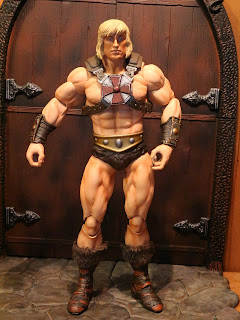 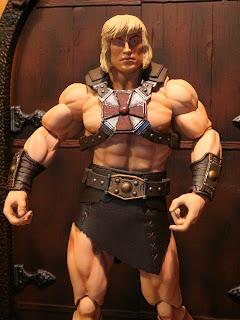 * He-Man is an impressive looking figure. He's large, heavy, and really does look like a concept design for a movie costume for He-Man. All of He-Man's armor is made from separate pieces and is removable other than his harness. I don't see a way to take this off. The paintwork is phenomenal here not just because the armored bits look weathered and realistic but also because of the details and highlights on He-Man's body. It really adds a lot of character to the design. 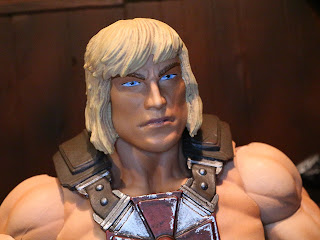 * Mondo went with their own design for He-Man and while he's still a blonde haired barbarian, he definitely looks much sterner than any of the previous cartoon depictions. He definitely has a very steely, intense look to him, which I dig. I'm not completely sold on the hair but overall I really do like this. It separates him nicely from most other incarnations of the character. 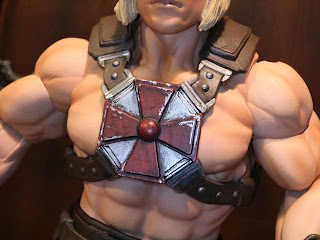 * He-Man is wearing his classic harness with a red cross design on the front but here the straps look like they're meant to be leather. It's a cool design that seems like it would make a great movie design as it seems to be well thought out. I love the weathering on the chest plate as it makes it seem like it's really a piece of aged, battle worn metal. 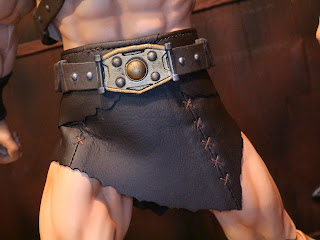 * He-Man has a belt around his wait which keeps up a faux-leather loincloth. It's actually really nicely stitched and fits in well with this more savage depiction of He-Man. Guess what? if you like this look then you're in good shape. If you don't? It turns out that both of these are removable. He-Man's waist can separate at the balljoint there, allowing you to take off the loincloth and the belt. 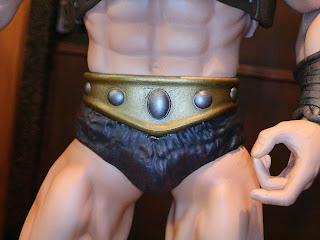 * Underneath is the traditional fur briefs with the classic metal belt. I like the other look better on this figure but 1. At least Mondo gave us an option and 2. How cool that they went with the vintage design underneath the pleather loincloth. 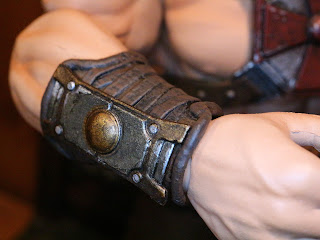 * He-Man's bracers look pretty cool and also appear as if they're made of a mixture of metal and leather strips (the pieces are really just plastic, though). Remove the hands and they slide off easily. 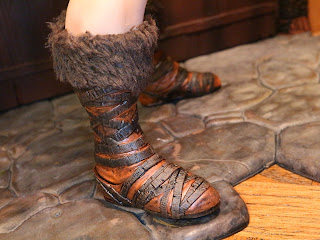 * He-Man's boots are incredible. Holy smokes, the paintwork really supports the sculpt to make these look incredibly realistic. What's even cooler is that the furry cuffs are actually furry! Yes, the furry cuffs are really made of soft goods to give them a realistic fur lining. I love this! It's insane! 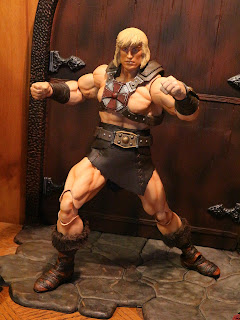 * He-Man does not feel like your traditional 1/6th scale figure but more like an oversized Masters of the Universe Classics figure. He is really heavy, though, and also very durable. I love how sturdy this guy feels. The more I handled him, the less I felt like there was the potential for breaking him. Mondo definitely has done a great job with the quality here which should inspire confidence in buyers. The articulation isn't bad, either, as He-Man is fairly fun to pose. 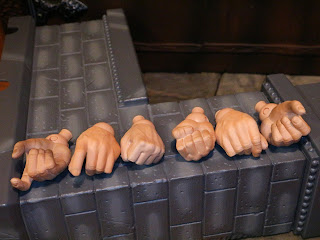 * He-Man's hands swap out rather easily (they have really thick wrist pegs so no worries about breakage) and you can swap out between three pairs: Pistol grips, fists, and standard grips. The hands are actually fairly rubbery, too, making putting weapons in the hands much easier. 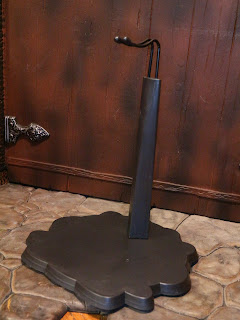 * While you probably don't "need" it, He-Man does come with a black plastic display stand with a metal display stand that rests under He-Man's crotch to keep him standing. It's not the best design for a stand but it works quite well for a heavy figure like this. 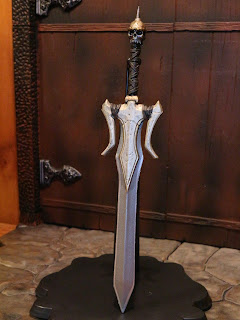 * I decided to use the stand to show of a few of the weapons here because, wow!: Mondo loaded this guy down! First up is the Power Sword. This is a redesign of the Power Sword but it definitely has the distinctive shape while looking much more brutal and made from different materials. The handle is cool with a helmet wearing skull for the pommel with a very sharp spike on the top. 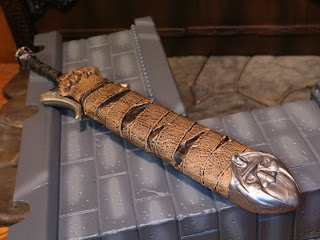 * The Power Sword easily fits inside of He-Man's scabbard.The scabbard follows the design cues of the sword  and other elements of the figure by looking like a mixture of metal, wood, and leather. The leather straps wrapped around the scabbard have some killer paint applications while the bottom of the scabbard appears to be a metal decorative element that resembles Battle Cat's helmet! That's a cool detail! The rear of the scabbard features two removable plastic clips that can attach the scabbard to He-Man's harness and/or belt. 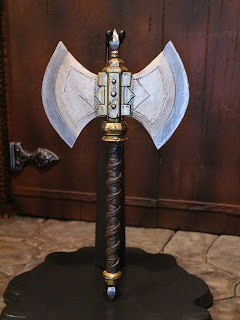 * I often prefer He-Man with his crazy huge ax rather than his Power Sword so, thankfully, Mondo gave us an ax worthy of the most powerful man in the universe. This thing is a beauty, right? 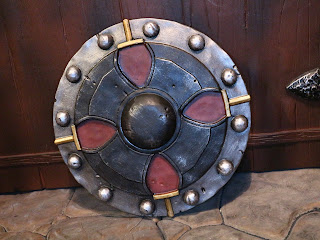 * After the Power Sword and the ax, the last weapon needed to complete the trip of He-Man's three iconic armaments is his shield. While it certainly draws inspiration from the vintage toy the shield looks much grimier with a handmade appearance. I love this! It even looks like the front has some extreme weathering, perhaps from deflecting fire from a dragon or something. Each accessory in this set probably has more paint applications than a standard action figure you would pick up at the store. 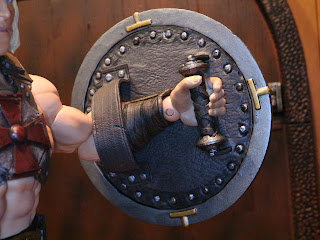 * The rear of the shield is impressive, too, as it continues to look like it's made of a variety of materials. The handle is removable, allowing you to slide the loop over He-Man's arm and then place the handle in his hand, afterwards attaching the handle to the shield. This makes it easy to fit him with the shield and keep anything from breaking. Mondo did some excellent design work here as this was a brilliant way to handle this piece. 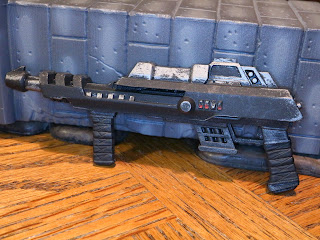 * He-Man includes... a laser rifle? Yes indeed! This rifle is actually based off of the vintage rifle included with the Castle Grayskull Weapons Rack (it was later recolred orange and used for Webstor, too). It's a cool extra and continues to have amazing paintwork. Mondo has really gone all out with this release. He-Man is expensive but every accessory included with the figure feels like it's helping to justify the price of the figure. 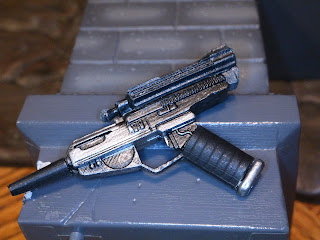 * He-Man includes his pistol, too. This one is based off of the design of the pistol used by Dolph Lundgren's He-Man in the 1987 Masters of the Universe film. It's another incredible sculpt. As a fan of the movie I'm always thrilled to have toy references to the film. I do wish He-Man had included an optional cape, though. 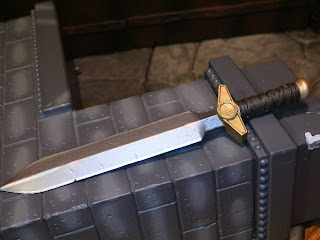 * He-Man also includes a short sword. This weapon is based on another item from the vintage Castle Grayskull Weapons Rack and it features the same beautiful paint work and sculpting as the rest of the weapons. 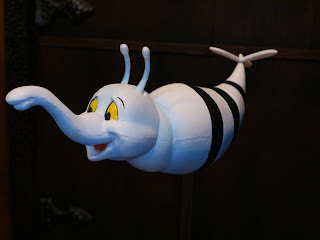 * He-Man also comes with... Berbie? Yes, He-Man includes a minifigure of Berbie, a strange creature who appeared in the Filmation episode Double Edged Sword. This is a pretty cool extra but, wow, is it out of left field. How funny that Mondo went with such a cute and silly character design for such a serious redesign of He-Man. I'm guessing they found the juxtaposition between the two styles of MOTU to be just too funny. Berbie's tale does rotate, just FYI, and his antennae are balljoints. 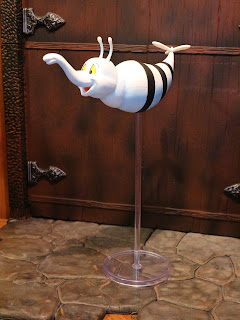 * To give Berbie the illusion of hovering Mondo included a clear plastic flight stand. Berbie fits right on top of the two piece stand. Honestly, how many of y'all want to put Berbie with your MOTUC or Club Grayskull figures? 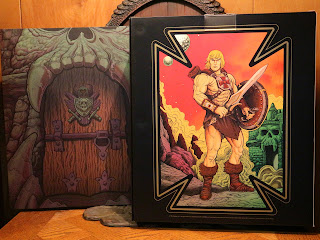 * The box is not only collector friendly but it is also insanely gorgeous. The interior box is a five panel box with magnetic closure and has a gorgeous print of He-Man on it. The plastic trays to hold the figure and accessories slide out easily. The slip cover looks like the door of Castle Grayskull. This box is worth displaying as well.
The Negatives: 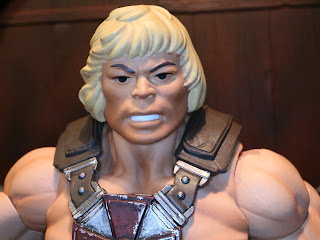 * Probably for fun, Mondo included an alternate He-Man portrait that looks like the vintage figure. I don't dislike the vintage figure by any means but it really seems like such a strange inclusion here. To be honest I would have much rather have had another more expressive headsculpt. Some folks will like this but I feel that it really clashes with the design of the body. 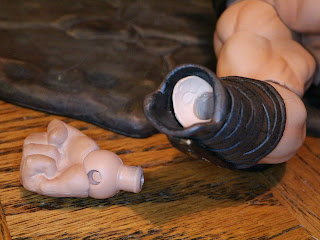 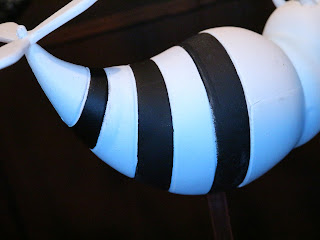 * Burbie's stripes have some slight slop to them. It wouldn't be noticeable except that his color scheme is black and bluish/white, which stands out a bit. 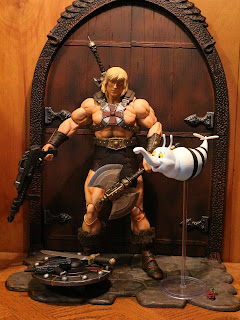 Some toys these days can be very expensive. He-Man is one of those. That being said, I am amazed at the quality of this. It's not just that the figure itself looks great and features lots of expertly painted accessories but that the figure itself feels sturdy. Other than some of the smaller pieces such as the pommel of the Power Sword or Berbie's stand, everything else feels like it would hold up to actual play. I would probably trust my five year old with this figure before I would with most other toys these days targeted at collectors. I love Mondo's unique take on He-Man and while they've got Skeletor and Faker coming soon, I really look forward to seeing some other characters, too. There have been  rumors of Man-At-Arms, She-Ra, Teela, and Merman, so let's hope we see a bit more at SDCC. If this line kept a pace of three or four figures a year, it could be a new favorite. This is an Epic He-Man that makes me feel like a kid again!

He-Man/ Prince Adam is one of my favorite characters and I've reviewed quite a few toys of him: The Series 3, Series 2 and Series 1 M.U.S.C.L.E. He-Man and Prince Adam minifigures, plus the Masters of the Universe Classics Galactic Protector He-Man, the future King He-Man, Laser Power He-Man, Snake Armor He-Man, and Flying Fists He-Man, the Super7 Prince Adam (Laughing) exclusive and Ultimates Filmation He-Man, the Mega Construx He-Man from the Battle for Eternia Collection and the He-Man from the Wind Raider Attack set, the 200x He-Man minifigure from the first Heroes vs. Villains Gift Pack, the ReAction Slime Pit He-Man, and the Funko VYNL Prince Adam + Cringer set.
Posted by Barbecue17 at 5/31/2019