31 Days of Toy Terror Lives: The Frankenstein Monster from The Real Ghostbusters: Monsters by Kenner 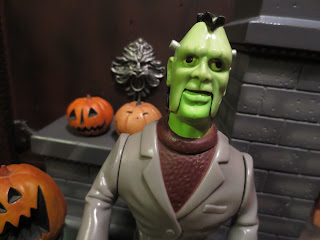 Let's turn the dial back to 1989 for today's installment of 31 Days of Terror Lives as we check out a figure from Kenner's The Real Ghostbusters: Monsters. This was a series of monsters for the Ghostbusters to battle that consisted of more classic or movie based monsters rather than the typical bizarre and unique monsters seen in the toyline and cartoon series. Frankenstein's Monster is without a doubt one of the most recognizable monsters in recent history and it's fun to see him mixed in with the Real Ghostbusters. This is a toy that I owned as a child but, as I've confessed before, there was a time when I sold off a number of my toys and the Ghostbusters were one of the victims. What was I thinking? I picked this guy up recently in a small lot of The Real Ghostbusters toys so keep in mind that he's a bit more scratched up than most of my toys. Let's visit Dr. Frankenstein's lab and check out his monster after the break... 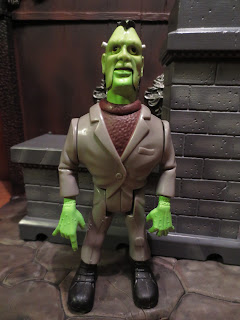 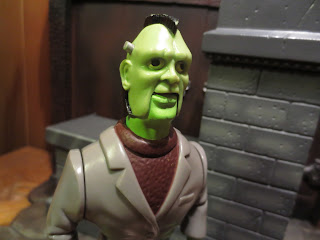 * This is a very classic looking rendition of Frankenstein's Monster and I appreciate that. While this might not be the version of the monster you would see in an older film it's definitely the type you'd see on dollar store Halloween decorations or painted on the side of a carnival ride. I love the undersized jacket, the green skin, and the forehead bolts. Interesting that they're on the forehead and not the neck, huh? 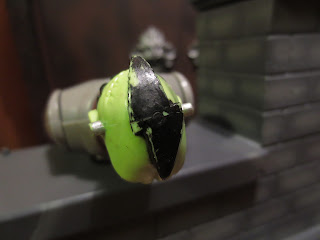 * Check out the top of the monster's hair: It's lightning bolt shaped. Pretty slick, right? This guy surely was a prominent figure in the heavy metal scene in the late 80s, right? 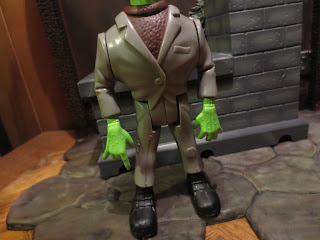 * Here's a closer look at the monster's body. You can see the cool, textured sweater underneath the grey suit and his massive weasel-stomping boots. This guy dressed pretty slick for a creature composed of parts from various dead bodies. 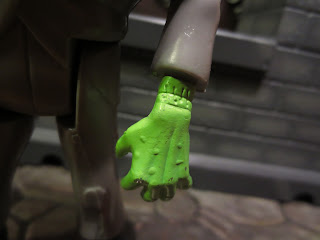 * The monster's hands are really cool. There's a lot of odd, bumpy detail on the hands themselves as well as stitching where the hands meet the forearms. 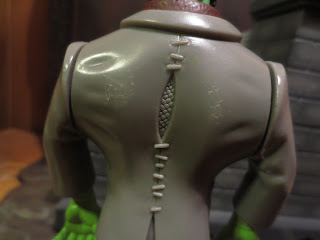 * I love the little details on the back of his jacket. You can tell that the jacket is too small for Frankenstein's monster because it's busting at the seems. This isn't so much a case of "fat guy in a little coat" as it is a case of "tall guy in a little coat." I wish Kenner had painted the monster's exposed sweater peaking out from the rip in the jacket but that type of paint work wasn't really part of this line's style. 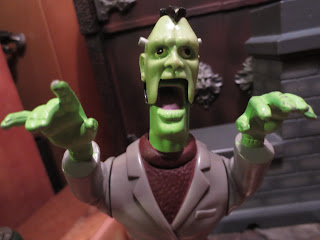 * The action feature for Frankenstein's monster (everyone in this series has one) is that when you squeeze his legs together he opens his mouth and raises his hands. It's petty cool as the "hands straight out" pose just seems like a very traditional Frankenstein's monster pose while the open mouth makes him look quite a bit more frightening. * It was tough to get a good shot inside of his mouth so here's a closer look done with the assistance of my camera's flash. 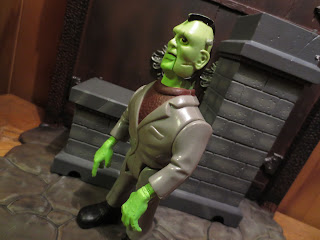 
* My only real negative with this figure is that his articulation is limited due to his action feature. You can't move his head nor pose him with his mouth open. It's tough to find much wrong with a 25+ year old figure from your childhood, you know? 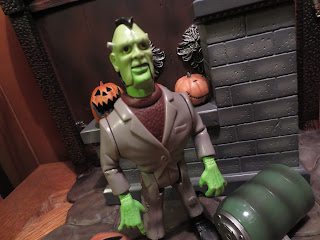 I don't remember being too excited by this figure as a kid but now, with a greater love for classic movie monsters, I find him quite charming. He's a good toy and his action feature is quite fun. If you're a fan of Frankenstein's Monster or of the Real Ghostbusters this guy might be worth picking up. You can find him rather cheap and he's a fun, slightly spooky addition to any horror collection. I'd give him a Good and a 1/2 overall.

Keep checking back here every day in October for more Toy Terror! Also, make sure to check out the Toy Bloggers United contest being hosted here this month! For more 31 Days of Toy Terror, check out my Hokey Halloween Horror page for spooky fun from 2016 and years past!
Posted by Barbecue17 at 10/04/2016