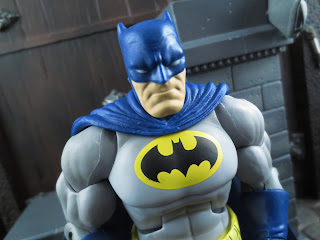 When a specific comic is still getting attention 30 years later, particularly attention from mainstream retailers, you know it's probably something special. That definitely is one way to describe Frank Miller's The Dark Knight Returns. Perhaps bolstered by the conflict in the upcoming Batman v. Superman: Dawn of Justice, Mattel's new enlarged DC Comics Multiverse line has given Wal-Mart and exclusive series of three figures celebrating the 30th anniversary of Miller's seminal Batman tale. Included in the series is Superman, a Son of Batman, and the Dark Knight himself. Today I'm looking at Batman, whom I managed to snag during a trip to my local Wal-Mart last week. While Mattel has released a Dark Knight Returns Batman before in their short lived Batman Unlimited line (which this figure shares most parts with) this does represent a different costume worn by the character in that story. Ready for a closer at Batman? Then join me after the break... 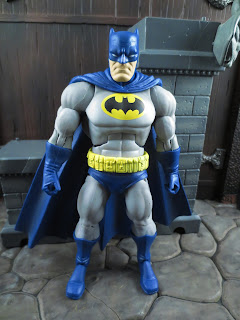 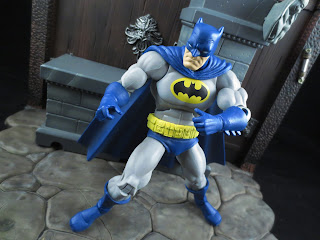 * Since he shares parts with Mattel's previous DKR Batman, this figure is built using a number of parts from Masters of the Universe Classics. This really helps to nail the exaggerated, bulkier proportions of an older Bruce Wayne who is getting back into the game after a decade of retirement. The articulation works much like a MOTUC figure, which I love. Solid, durable, and well articulated. 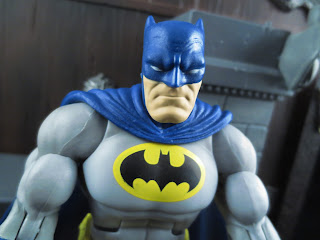 * That's a pretty pissed off looking Batman, wouldn't you agree? I'm really pleased that Mattel gave us a new headsculpt here rather than just reusing the older one. It's really great and captures the spirit of Miller's depiction of the Caped Crusader early on in the story. Which brings me to my next point... 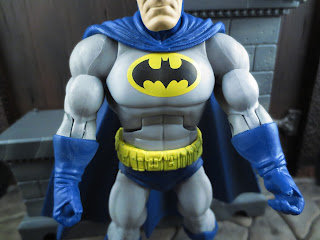 * What's cool about this Batman, wearing his classic blue and gray duds, is that he represents Batman early in the story. This isn't Bruce wearing a new outfit: This is him going and grabbing his old suit and getting back into the act. I started rereading The Dark Knight Returns after picking this figure up and I'm now really glad that I have that particular version of Bats in action figure form. The paint work is nice and clean here and looks great. It's a very traditional looking Batman with the bigger, bulkier edge. 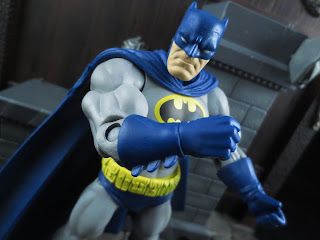 * Want to see something impressive? Here's a Batman figure without bent gauntlets! That's because this version of Batman has shorter, stubbier gauntlets. They look great, though, and do seem to match Miller's art. It's always tough to get a perfectly comic accurate figure of Miller's art since it changes so much in the book itself, but this works nicely I do believe. 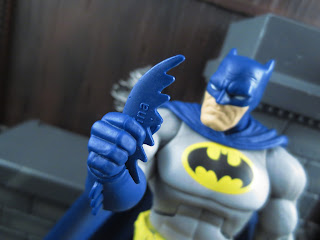 * I'm always happy when a Batman figure comes with a Batarang... 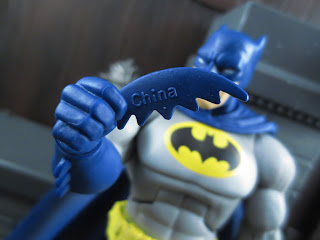 * But not when the Batarang proudly advertises that it was made in China. I have nothing against it being made in China, but seriously? That writing is almost as large as the accessory? 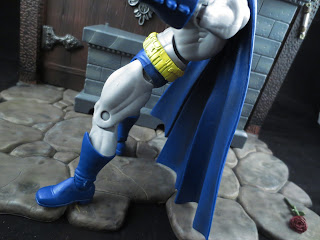 * I really wish Mattel had went with a cloth cape. It would have made for a more dynamic look and keep the figure from falling over when Batman is standing upright. Of course, typically he's hunched over in DKR, but still, the cape is a bit heavy here. It's been a few since the last DKR figure from Mattel came out, but I still really, really like this figure. The lack of a great accessory is still noticeable (particularly when Superman and the Son of Batman have some nicer extras) but the figure is pretty great. I love the juxtaposition of the crueler, more monstrous Batman wearing his silver age costume which this figure represents. It's a great figure and is definitely worth tracking down. Batman should probably be the easiest figure to find in this series since he's packed the most heavily in cases, so go hunt him down. He's still a Great figure.