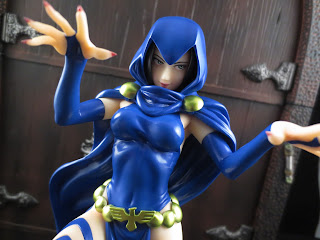 As anyone who has checked out my Top 10 Favorite Toylines of 2015 knows, I'm a huge fan of Kotobukiya's DC Comics Bishoujo line. They're without a doubt one of my favorite lines to collect. Honestly, I think they look way better than any other statues on the market, even statues that cost 2 and 3 times more money. Just in their DC Comics line alone, Kotobukiya has released some amazing product over the past few year: Batwoman, Zatanna, and Black Canary have all been incredible! Today I'm looking at the newest statue from Kotobukiya: Raven! Based on the art of Shunya Yamashita, this powerful sorceress is depicted in a floating pose with her hands directed out to perform some sort of magical spell. Is Raven as great of a statue as the others in the line? The answer, sadly, is no. Find out why after the break... 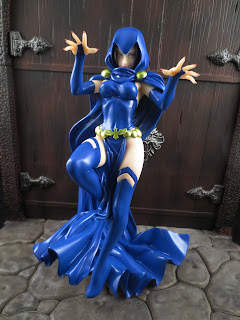 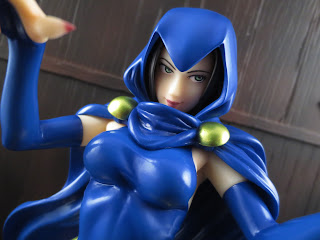 *As has always been the case with every Kotobukiya Bishoujo figure I've purchased, the paint sculpting is nothing short of gorgeous. Raven's face and dark hair are peeking out of her hood, giving her an air of mystery. Raven's costume is beautifully captured here and the material really looks like some sort of cloth robes rather than spandex. The folds and wrinkles in the material are extremely well rendered here. 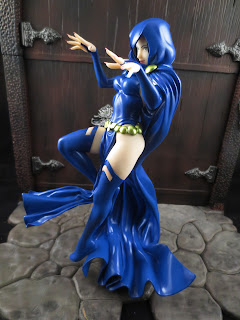 * I really like the flow of the statue! When you look at it, it's immediately clear that Raven is hovering in the air while performing some kind of spell or enchantment. I love the choice of making Raven appear to hover off of the ground while also leaning her back at a slight angle. It makes her seem even more mysterious, as if she's pulling back a bit to reflect and concentrate. The sculpt of the cloak looks awesome, too. You can almost see the motion in the figure! 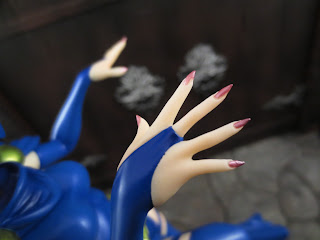 * The little details on the Bishoujo statues just always help them to look incredible. Because these are plastic statues, small such as Raven's splayed fingers look sharp but don't feel at all fragile. Also, her fingernail polish matches her lipstick. That's a cool little detail, eh? 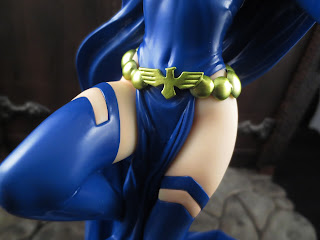 * I love Raven's belt! It's cast in a beautiful gold plastic and just looks excellent holding the bottom of her robe in place. Her boots are also pretty unique, too: There's a cut out at the top that reveals just a little bit of her thigh. It definitely makes them a bit more interesting and adds some color variety in the midst of all that blue . 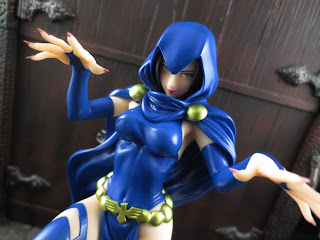 * I love the design of Raven's cloak but I think it makes it a bit harder than it should be t see her face. The face really should be her focal point, but it's not. The way the hood flows looks awesome in the art but it's tough to see her face from most angles on the actual statue. Her face looks too small. Part of that is due to the fact that she's leaning back but I think it could also be that the hood is too large and perhaps a bit too thick. 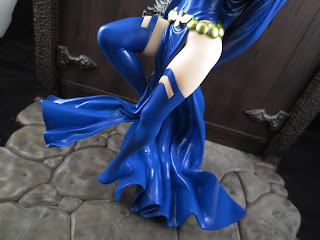 * My biggest problem with this figure is that there's just too much blue. I love the deep blue here but you have to admit that it makes Raven's cloak, robe, and boots blend together. While the costume is different, notice how the DCUC Raven used some shading and a lining on the cloak to break things up a bit. Actually, the Yamashita ar the statue is based on uses some shading plus an black lining to the cloak to break things up as well. Kotobukiya statues usually favor solid, clean colors, but something could have been worked out to help every aspect of the figure stand out boldly and beautifully. 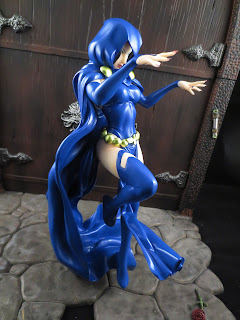 * Like Starfire, Raven doesn't rest on an actual base. Instead, the bottom of her long, flowing cloak is the base. I like the effect but I'm still a bit concerned by the fact the "base" of the cape touching the ground really isn't wider than the figure's area itself. Not only does it not look as good as if this piece were mounted on a unique base but it seems like it could be more prone to being knocked over. I hope trying to remove the bases on these isn't a trend that Kotobukiya is trying to move towards more often. Actual bases not only seem more secure and functional, but they also give a chance for more design elements to be included with the statue. 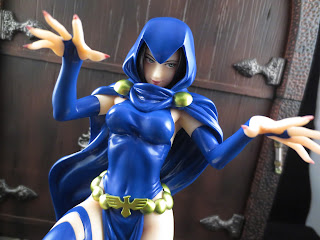 Wow. This is the first Kotobukiya Bishoujo statue I've had any problems with. Don't get me wrong, I like it. It's just not as perfect as the other statues in the line. I think this is a simple case of the statue needing some more tweaks. Raven is still a great statue, probably much cooler than most of what else is out there, but she definitely has some design flaws. Still, the color, beauty, and movement of the statue are still present and you can't knock the quality of what you're getting. When I assign ratings I typically try to think about the figure compared to what else is offered in the same line first. Compared to other Kotobukiya statues in the Bishoujo, I think Raven earns a Good and a 1/2. That's low for this series, but still represents something worth buying for a fan of the character or a fan of the line. I doubt anyone picking this up will have buyer's remorse (you know, unless you needed that money for rent or food or something) but she's not the first Bishoujo statue I'd recommend. She's still impressive, but she just hangs out with an even more impressive crowd.


I actually have reviewed another figure of Raven: Her DC Universe Classics figure from series 15.

I've reviewed a few other DC Comics Bishoujo statues on here, including: