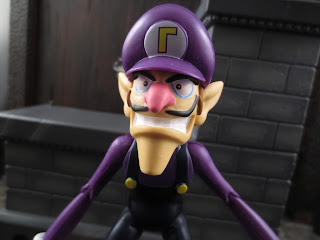 Everyone needs an evil twin, right? Well, Mario got Wario early in the World of Nintendo line but only now is Luigi getting his evil twin rival, Waluigi! Well, calling Waluigi Luigi's twin isn't really accurate. He's more like an evil exaggeration of Luigi. Where Luigi is tall, thin, and has an epic mustrache, Waluigi is taller, thinner, and has an even more epic mustache. Originally appearing in Mario Tennis back in 2000, Waluigi has become a mainstay of the Super Mario Bros. crew over the past 15 or so years. He's one of the three new characters to be released in World of Nintendo series 1-5 (along with Sheik and Bowser Jr., whom I haven't found yet) and was probably the one I was most looking forward to. Ready for a closer look at this dastardly villain? Then pretend to twirl your villainous mustache, make a devious chuckle, and join me after the break... 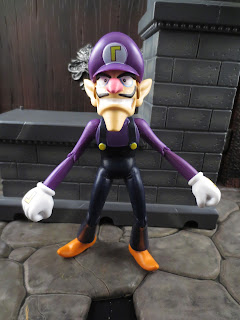 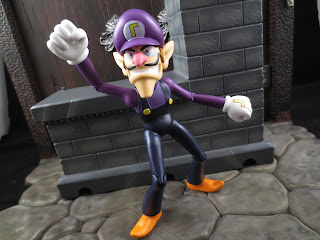 
* Originally there was some concern that Jakks Pacific might make Waluigi too short. Fortunately, those fears were unfounded: Waluigi is adequately taller than Luigi and has a great gangly appearance. Th articulation in his arms is quite nice and he's absolutely a fun figure to play with. 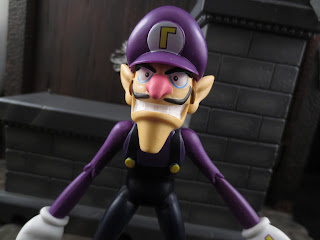 * The headsculpt is really good here. Jakks has done a wonderful job of translating the colorful, exaggerated Super Mario Bros. characters into three dimensional action figures. I love Waluigi's exaggerated features, his devious grin, and his dastardly mustache. He looks ready to tie someone to some railroad tracks and laugh maniacally! 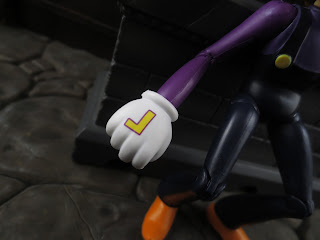 * The paintwork on the figure looks really nice. Considering these are mass market figures, I don't feel that Jakks really ever skimps on the paintwork, as some companies like Playmates are wont to do. I love the backwards "L's" on Waluigi's gloves. They're so neat and clean and just add to this guy's bizarre charm. 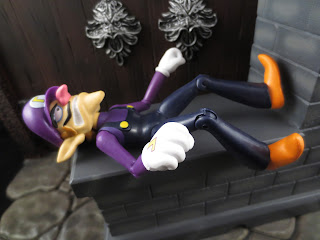 
* My only problem with the figure itself is that Waluigi has a tendency to tip over unless you really focus on posing him in a deep knee bent stance. He's not impossibly to pose, just difficult. He will tip over from time to time unless you use a doll stand or something to support him. 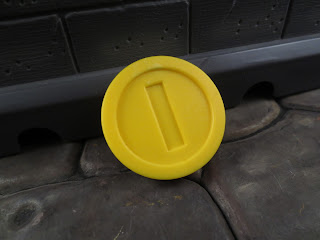 * Waluigi comes with.... a coin? Another coin? Don't get me wrong, coins weren't bad the first few times we got them. They're just starting to get old. The figures can't interact with them and they don't add much to displays. I really wish Waluigi had come with something cooler, such as the Poison Mushroom from Super Mario Bros.: The Lost Levels. That would have been flipping amazing. 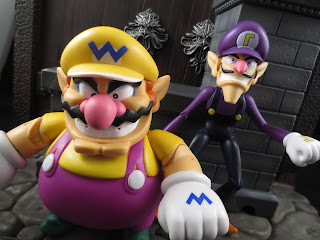 Waluigi looks good but like the rest of the World of Nintendo figures, when you put him alongside other characters he looks even better! While these aren't perfect figures, I can't help but love them. This is one of the five lines I'm the most excited to hear more about at New York Toy Fair 2016 this coming weekend. I know the line has had some distribution problems and has had trouble getting into some retail markets, but it's an incredible effort and easily the Nintendo line I've always wanted. Waluigi is a Great addition to the line and is worth picking up.  Who has the best mustache of them all? You decide with new World of Nintendo action figures from Jakks Pacific!

This is the only Waluigi figure I've reviewed, but I have reviewed plenty of other World of Nintendo figures, including: