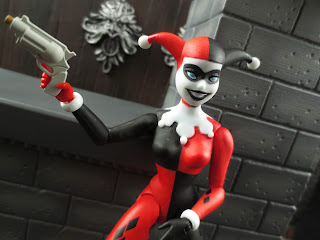 Today I'm looking at another figure I picked up on my trip to the Charlotte MiniCon: Harley Quinn from DC Collectible's Batman: The Animated Series line. I somehow missed out on this figure when she first came out last November, so I was excited to see her at a vendor's table for...$15. Yup. $15. That's incredible! Usually you see vendors mark stuff up like crazy but I actually got this version of Dr. Quinzel for $5-$10 under the retail price. I actually asked the dealer if something was wrong with the figure (she was sealed in the package) but was assured that she was fine and that they were just clearing out stock. Incredible, right? Let's jump right in and take a closer look at Harley Quinn after the break... 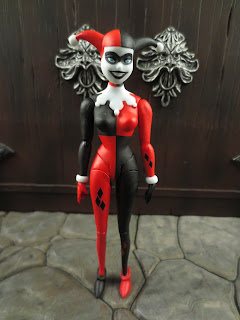 Accessories: 6 interchangeable hands (2 fists, 2 grips, and 2 open hands), a three piece display base, a pistol, and a Joker-fish. 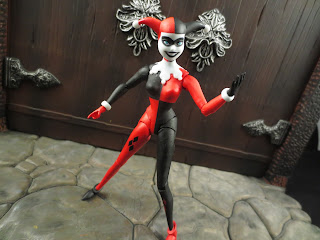 
* I'm really glad that DC has gotten the quality control on these figures under control. Harley's upper body looks great and moves perfectly. She has a nice range of motion in her arms so you can put her in some expressive poses or have her interact with her accessories. 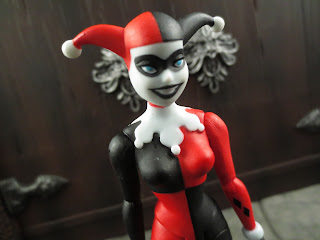 * The sculpt really captures the cheeky, silly quality of Harley's earliest appearances. While the figure is mostly smooth, the proportions are perfect. I love the raised elements of the sculpt such as Harley's collar and cuffs. 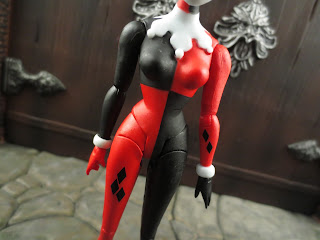 * Harley's red and black jester's suit is captured really nicely here with some clean paintwork. While it's part of the original design and not unique to this figure, it's still impressive as to how good this outfit looks. It's truly an iconic character design and it's great to see Harley in a figure that truly pays homage to her original appearance. 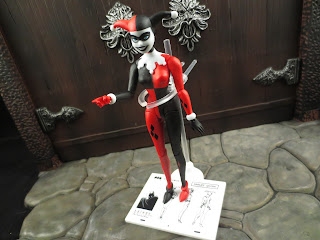 * Harley comes with one of the display stands which every other figure in the line has come with so far, too. These function more like doll stands than your traditional action figure stands, but that's really a plus here. the Bruce Timm style doesn't lend itself well to characters who are overly stable as action figures, so the clasps around the wast really help to keep the figure upright while not forcing them to sacrifice authenticity for the sake balance. 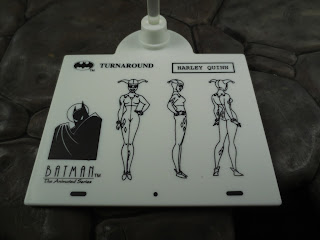 * I still like the turnaround art on the base of each display stand. It not only gives the figures name and which animated series they come from but it also has some character specific artwork. I'm all about some personilization for display stands. 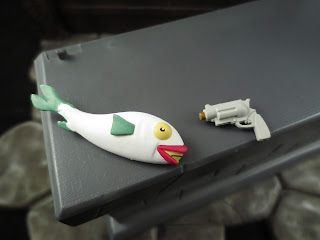 * Harley comes with two accessories which she can interact with: Her popgun revolver and a Joker-fish from the episode "The Laughing Fish." Both the revolver and the fish fit perfectly in Harley's pistol grip hands and they also both feature some additional paint apps. The Joker fish is really colorful and fun. Harley looks great holding it up like it's some grand catch! 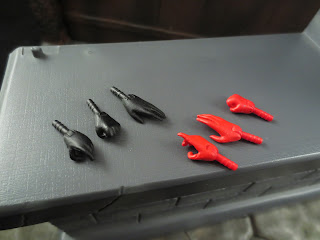 * Harley also comes with six interchangeable hands, three for the right and three for the left. This has been a really consistent feature of the Batman animation lines from DC Collectibles and I'm definitely a fan. They swap easily and all look great. Harley comes with a set of pistol gripping hands, a set of open, expressive hands, and a set of fists. 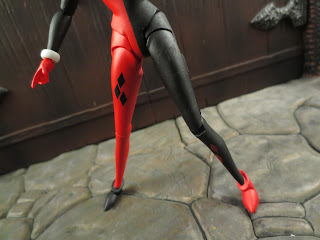 * One thing I really just don't like about this line are the H-hinged hips used. H-hines work on some lines but they feel completely at odds with the sleek, svelte style of the Bruce Timm designed characters. I'm also not sure they give that great of a range of motion here, either. The ankles could also be executed better. Why not simple ball joints to give her a better range of motion? 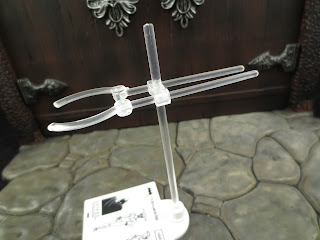 * I like these stands but I still think the way the back of the arm juts out from the back is obnoxious and unnecessary. Rather than help your display, the really hinder the amount of figures you can display on a shelf. 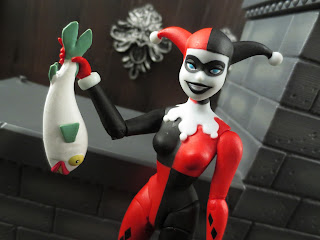 * Harley's not a bad figure at all. In fact, it's refreshing to have a newer figure that adheres so closely to the character's original roots on Batman: The Animated Series. DC Collectibles has done a nice job on this line and while I'm not as devoted to it as some fans are, I do enjoy picking up the occasional figure. Harley Quinn gets a Good and a 1/2 rating from me. Honestly, I think I'd rather these figures either be immobile from the waist down or come with an alternate non-articulated lower body to preserve the aesthetics of the original characters. Am I crazy or would that be an awesome idea?