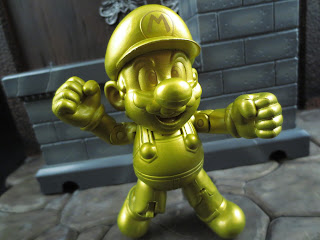 Today I'm looking at the fifth and final figure in series 1-5 of Jakks Pacific's World of Nintendo line: Gold Mario. I really like this line and every figure so far has been pretty fun but I do have to say that a variant like Gold Mario is a little bit...dull, I guess? When I think of gold action figures, I immediately think back to some of those crazy mid-90's variants like the gold Spawn figures. Those things always seemed cheesier to me than a Wisconsin quesadilla. Gold Mario is a bit different, though. It turns out that he's actually based on a legitimate variant from New Super Mario Bros. 2, though, which allows him to shoot gold fireballs which turn blocks and enemies into coins. That's kind of cool but it's still tough to get really excited about this Mario as it truly is just a paint variant of the basic Mario figure which has been released a few times now. Ready for the nuts and bolts of this figure, check out that previous review. For just a quick overview of what's new here, join me after the break... 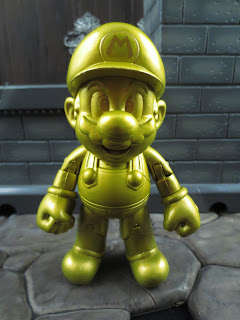 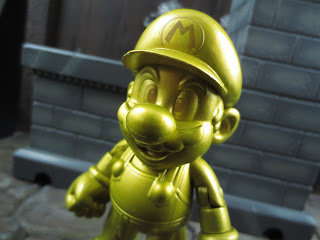 * Let me first say that the gold paint on Gold Mario does look really nice. I like the color of it, so that's definitely a positive. Secondly, I like how Mario's eyes and the logo on his hat have been given a darker gold paint application. It breaks things up a bit and helps to give your eye something to focus on making this feel more like Mario in a specialty suit and less like just a trphy of Mario. 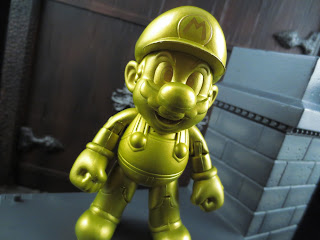 * Well...it's just a gold Mario. Yup. That's it. I know that Gold Mario is a legitimate new Mario costume from New Super Mario Bros. 2, but it's the kind of variant that seems destined to peg warm. There are so many other Marios that would have been better: Ice Mario. Caped Mario. Raccoon Mario. Bee Mario. Mario w/ FLUDD. Metal Mario. Dr. Mario. Frog Mario. Invincible Mario. Seriously, there are so many better Mario suits that could have been picked over this one. 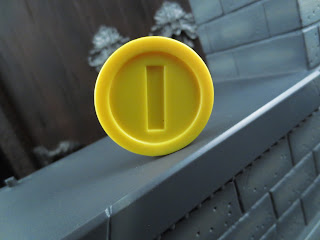 * Gold Mario comes with...a coin. Huh. The coin is definitely the most overused accessory in the World of Nintendo line and I really wish Gold Mario had come with something else. This was a chance to spice the figure up by including a smaller villain, like Bowser Jr. includes, or to give us a simple repaint of the Gold Flower that turns Mario into Gold Mario. Instead, we get another coin. 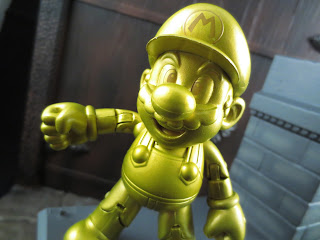 Well, this is indeed a gold figure of Mario. It's a pretty decent figure, but it's tough for me to get terribly excited about it. That's quite possibly due to my own bias in that I've never played the game this suit comes from. In fact, I was completely unaware of that suit until I picked up this variant. Still, the gold paint is done well and the underlying figure is quite well done. I'm just not as enthused by it as I am by most other releases in this line. At the end of the day, this guy is the very definition of an Eh and a 1/2 figure: He's really only for die-hard fans and completests. Easily the most skippable figure in this line yet. Maybe if he'd included a more exciting figure he would have scored higher but, as it is, he's more of a footnote in this line than a real standout.

I have reviewed three other Mario figures: Fire Mario, basic Mario, and Tanooki Mario. I believe I've reviewed every other World of Nitnendo figure in this scale to be released (except for the exclusive metallic Samus) as well: