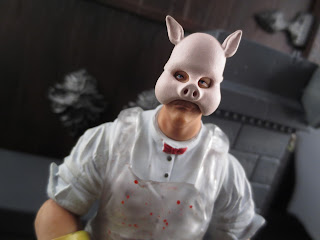 Mutilated corpses positioned in odd manners. Creepy doll masks covering mutilated faces. Eerie opera music playing throughout the city. All of these things greet you when you embark on one of the most challenging and most frightening side-quests in Arkham Knight: Perfect Crime, where Batman must track down Professor Pyg. A more recent addition to Batman's rogues gallery, Professor Pyg first appeared in Batman #666 back in 2007. Since then the leader of the Circus of Strange has appeared in the New 52, Batman: The Brave and the Bold, and Beware the Batman. What he hasn't achieved yet is an action figure in his likeness. Thanks to DC Collectibles that has changed and we now have a figure of Professor Pyg from his appearance in Arkham Knight (where he was voiced by "Howling Mad" Murdock himself, Dwight Schultz). As part of the overall excellent third series of DC Collectibles' Arkham Knight line, Professor Pyg is definitely the most interesting release since he's a brand new character for the ol' Batman collection. Is he a worthwhile addition to your shelf, though? Read on and find out after the break... 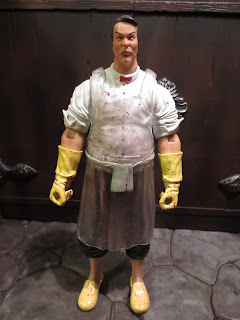 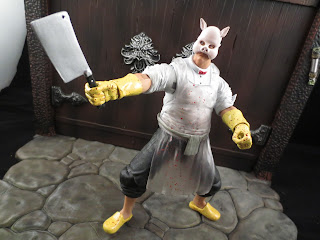 * Professor Pyg's not a character who needed a ton of articulation but I'd say he's as poseable as anyone else in the line. I've been pleased with how sturdy these figures feel, especially considering where DC Collectibles was just a few years ago when they were experiencing rampant breakage problems. Pyg is solid and you can really have a lot of fun with him. 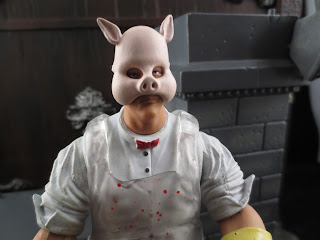 Obsessed with perfection, Professor Pyg covers his own face with a bizarre pig mask. He kind of feels like a character from the Manhunt or Hostel series, but he does add some nice variety to the types of supervillains Batman usually fights. Professor Pyg's pig mask is removable and fits securely over his face. There's something just a bit creepy about terrifying people wearing animal masks, isn't there? 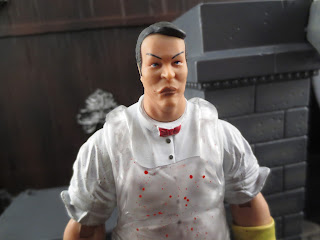 *Underneath the mask, you can find the true visage of Professor Pyg (real name Lazlo Valentin). Pyg has a great sour looking visage with some less than subtle skin alterations, but doesn't he sort of look oddly familiar to you? To my eyes he looks like a cross between Tim Curry, Mads Mikkelsen, and Lips Manliss from  Dick Tracy. Just creepier, and less handsome than the first two actors mentioned. 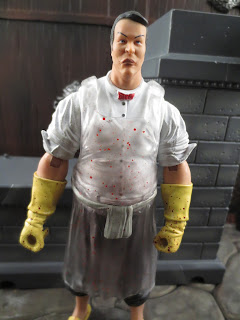 * It's tough to see in pictures, but Professor Pyg is actually wearing a clear plastic apron over his dressy clothes. This really just completes the effect: A blood speckled clear apron over some dress clothes that have been hastily pulled up to prevent them from getting stained just screams that this guy is out to kill anyone he meets, doesn't it? I'm totally getting a Leatherface vibe here, too. I wonder if that was intentional? 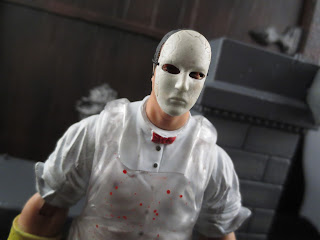 * Professor Pyg also comes with a Dollotron mask. It's not really intended for Pyg to wear (it's more of a side accessory) but it looks really cool. It's sculpted with lots of creepy little cracks and given a dirty paint wash along with some bloody looking smudges. This is an awesome piece! It stays on via a small elastic string, so you could use it on any number of figures. 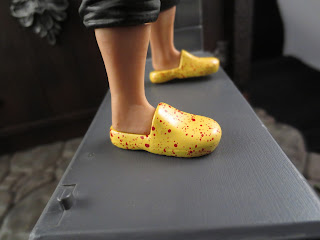 * To really complete the unhinged effect, Professor Pyg is wearing crocs. Yup. Crocs. Blood stained, yellow crocs. I love it. Professor Pyg might care about perfection in an abstract sense, but fashion and dignity have gone flying out the flipping window. What's really cool, though, is that the crocs are articulated. Well, his feet are, anyways. The place where his feet plugs into the croc? That's actually a swivel joint. How wild is that? 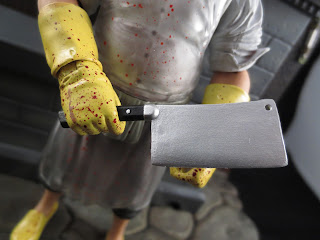 * While Valentin was a gifted scientist and surgeon, he's now a deranged madman who sometimes uses a meat cleaver. The meat cleaver looks awesome and fits in either of Pyg's blood spattered, rubber glove wearing hands. I love the blood spatter effects here, by the way. They look very realistic. 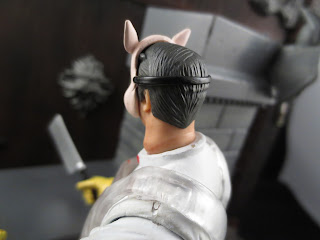 * My only complaint with Professor Pyg is less of a problem and more of a warning: Be careful with the strap that keeps the pig mask on his head. It seems like it has the potential to be a bit fragile, so exercise caution hen taking it on and off. Otherwise, I don't have any problems with this figure. He's incredible! 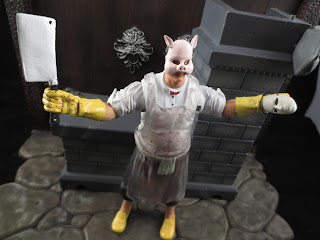 It's not every day that we get a new Batman villain in action figure form, so that's already a plus for Professor Pyg. Of course, there's also the fact that Pyg is a really well done action figure. He's incredibly creepy, nicely sculpted and painted, and comes with some great accessories. While I don't own the Red Hood figure from series 3, considering he seems to just be a retool of the earlier Arkham Knight figure with the Red Hood's head I think I can safely say that Professor Pyg is the star of series 3, an overall pretty stellar series. This guy gets an Epic rating from me as there's nothing I can think of that would have made him better. He's really an impressive and disturbing toy, and that always counts for something around these parts. 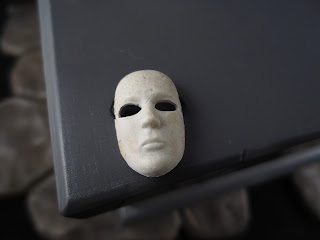 As I stated in the intro, this is the first Professor Pyg figure ever released and thus I haven't reviewed any other toys of the character. I have reviewed plenty of other Arkham Knight figures though, including: