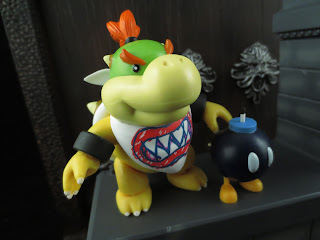 I've finally been able to pick up the figure I was most looking forward to in wave 1-5 of Jakks Pacific's World of Nintendo line: Bowser Jr.! Originally appearing in Super Mario Sunshine, Bowser Jr. has become a pretty consistent character over the past 15 or so years with appearances in multiple games. While Shigeru Miyamoto now claims that Bowser Jr. is Bowser's only real child, I always assumed he was the new baby brother for the Koopalings from Super Maro Bros. 3. Bowser Jr. is a tiny little guy but he packs a lot of punch in his small size. Ready for a closer look at this little green menace? Then join me after the break... 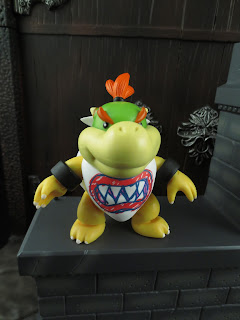 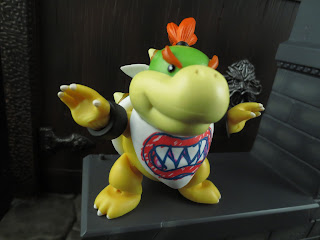 
* Now, considering that this guy is pretty small and awkwardly proportioned, I'm really surprised that he has the articulation he does. Bowser Jr.'s arms and legs have a decent amount of articulation. Honestly, it's more than I thought was possible on this little guy. He feels nice and sturdy, too. 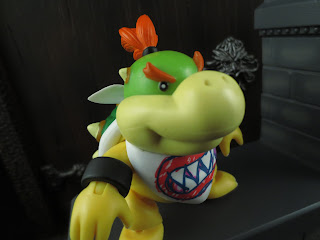 * Awww!!! Isn't he adorable? Seriously, Bowser Jr. just looks so stinking cute and evil. I really love the way Jakks recreates these rounded, cartoonish videogame characters as three dimensional action figures. They do a great job! There's not a ton of detail here, per say, but that's fitting with the property. I'm digging his eyebrows, though. They're so funny! 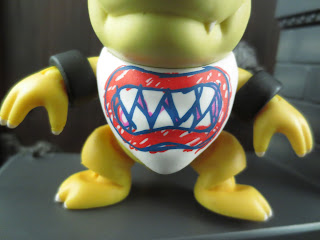 * I love the paintwork on Bowser Jr.'s bib! It really looks like something a toddler drew. Those teeth are so ridiculously cute in a "I'm trying to be terrifying like my dad" sort of way. The bib is an extra piece that sits around his neck, too. It looks great. 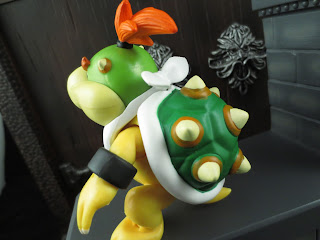 * The paint work is really neat and clean here, too. Nothing terribly fancy but Jakks typically manages to capture the bright, fun, cheerful appearance of the Mario cast perfectly. 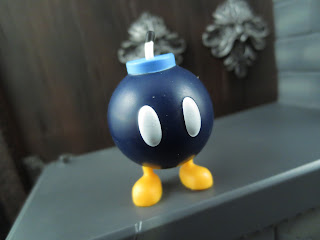 * Bowser Jr.'s accessory is....a Bob-omb!?!? Yup! Bowser Jr. essentially comes with an entire separate character! I love the look of this guy as the sculpt is just gorgeous. I mean, it's incredibly simple, but it looks just like Bob-omb. I think that this is without a doubt the coolest accessory in this line yet. It makes me really want a Mouser, too, for some reason. He and Bob-omb would look pretty boss chilling out together. 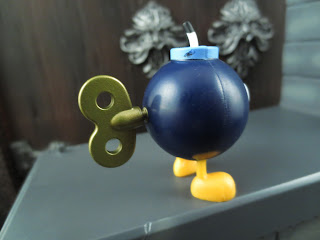 * Here's a picture of Bob-omb from the side so you can see his winding key. Seriously, this guy is about as good as any of the 2.5 inch World of Nintendo figures I've seen. He's an incredible accessory! 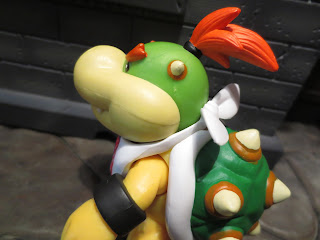 *While the bib looks cool, it really does restrict the movement of Bowser Jr.'s head. He has a swivel hinge joint under there but there's little you can do with it. I'm not sure that a removable bib would have looked as nice but it would have been more functional. Hard to say which was I would have preferred, but I do wish Bowser Jr. could look around a bit more freely.

Jakks is almost always going to have a tough time when creating action figures of Nintendo characters because they're just not designed to move like action figures. Still, they've done an awesome job with this line. While Bowser Jr. isn't the biggest, most well articulated figure out there, he's really fun and just incredibly cute! Plus, throw in a Bob-omb and I really have to give this guy a pretty high rating. Seriously, I'm so happy with him that I'm giving him a Great and a 1/2 rating. I really can't think of much that would have made him a better figure. Now, bring on the 7 classic Koopa Kids please, Jakks.

I haven't reviewed any other other figures of Bowser Jr., but I have reviewed plenty of other World of Nintendo figures: