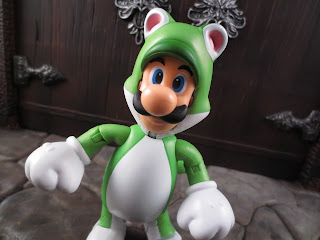 Today I'm looking at the first World of Nintendo that I literally have no idea about: Cat Luigi! I mean, I know who Luigi is but I have no idea why he is dressed like a cat. It turns out, most of the Mario cast has dressed like cats in the recent games, but I haven't played those games. I own a 2DS but I don't own a WiiU nor did I play my Wii much after 2007, so the newer Nintendo games just haven't been on my radar. Not that I don't like the idea of Cat Luigi. I love the idea! The cat suit, obtained by collecting the Super Bell, allows the characters to climb stuff, pounce on enemies, and scratch them with their claws. That's pretty boss if you ask me. Anyways, Jakks Pacific has put Cat Luigi in series 1-5 of their World of Nintendo line and he was one of the first two figures in the series I've found so far, so here he is! Join me after the break... 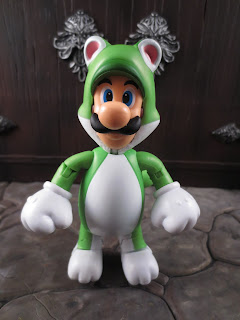 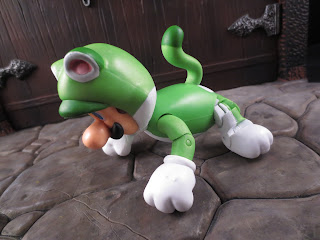 * Cat Mario's articulation is a lot better than many other figures in this line. In fact, you can actually put him semi-convincingly on all floors like a cat. I think in the game he can run really fast in this crouching position, but you could also pretend he's drinking from a saucer of milk. His hips actually have a very deep cut in the side which allows his legs to rotate up and take that odd cat-like position while his head has a swivel/hinge join to give him some ability to look up. It all works pretty well, all things considered. 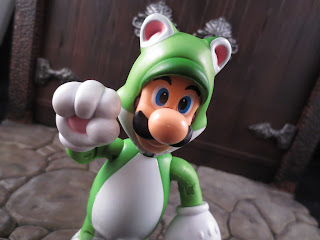 * Considering I had no attachment to this variant of Luigi prior to picking up the figure, I do like it. There's something quite fun and silly about Luigi in a cat costume. Jakks nailed Luigi's facial likeness but they also did a great job of making this look like Luigi's head in a costume rather than some sort of mutant Luigi. The little ears are funny, the paintwork is clean and neat for the most part, and the gloves and boots even have little pink pads on them.  I can dig it. 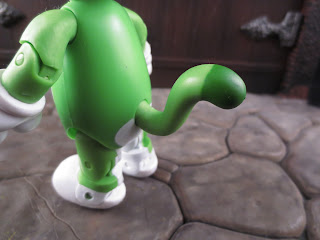 * Besides his limb and head articulation, Cat Luigi also has an articulated tail. It's ball jointed and has a pretty nice range of motion so you can give Luigi all kinds of expressive poses with it. Cats use their tails to express themselves, right? I'm a dog person, so I don't really know that much about cats. Pretty much everything I know about cats comes from Catwoman, Sabrina the Teenage Witch, and that segment in Tales from the Darkside: The Movie where an assassin is hired to kill a cat. 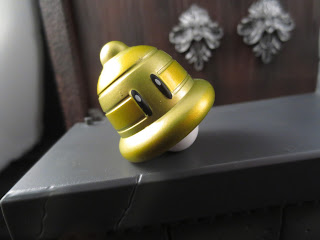 * While the accessories no longer come hidden in a little cardboard box (which I'm kind of sad about), we still get one with each figure in the series. Luigi's is the Super Bell, which is the special item that lets him the characters transform into their cat forms. It's a little gold and yellow bell with funny little Nintendo styled eyes, stripes around the waist, and a clapper hanging out the bottom. I can totally see that this is a bell now but when early images came out I thought it was a magical acorn or something. It looks really good, though. 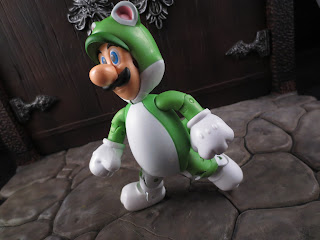 * While cats are fairly nimble creatures and capable of resurrecting the dead (again, I don't know much about cats), Luigi is not so nimble. Well, it's more that his hips are loose. I've heard people tell someone that they are so loose their hips rattle, but I don't think this is the same thing. The problem here is that Luigi doesn't always want to stand up. The t-bar/ ball jointed hips tend to feel a bit too wriggly and floppy. 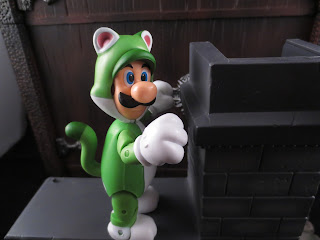 Cat Luigi wouldn't have even been on my radar so far as Luigi variants go but he turned out pretty nice. I'm not sure we needed another Luigi variant yet but this one at least brings lots of new stuff to the table: Better articulation, a new sculpt, and a new accessory. He's not the most exciting variant nor do I feel any of the nostalgia from him that most of the other figures give me, but I still do like him. He's a Good and a 1/2 addition to the line, and he's much more exciting than this series' Gold Mario the other variant. Wait, I see Luigi scratching the scenery. Let me go get the spray bottle! No! No! Get Luigi, get!