Action Figure Review: Sssqueeze from Masters of the Universe Classics by Mattel 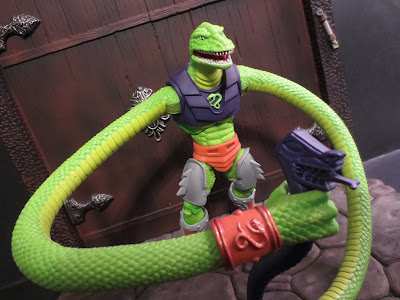 Folks, the release of Sssqueeze is a huge deal! With the arrival of Sssqueeze, the Snake Men are the first faction that we've completed! That's huge! This line has been going since July of 2008 (I jumped in with Moss Man in early 2010) and we've finally completed our first faction. Of course, with this year focused on completing the vintage toyline, we should see the vintage rosters of the Evil Warriors, Heroic Warriors, Great Rebellion, and the Evil Horde all completed by the end of the year. Still, the Snake Men did it first! Woohoo! Sssqueeze first appeared in the 1987 series of the vintage Masters of the Universe toyline but I've never owned that figure. He also had "staction" figure in NECA's 5th series of Masters of the Universe mini statues, but again I've never owned one. This is my first Sssqueeze figure ever! Ready for a closer look at this Evil Long Armed Viper who surely has to tell everyone he meets that his name is Sssqueeze with three S's? Then join me after the break... 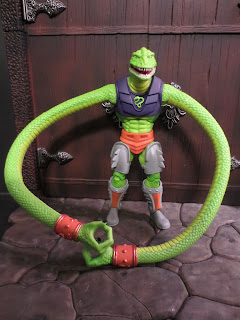 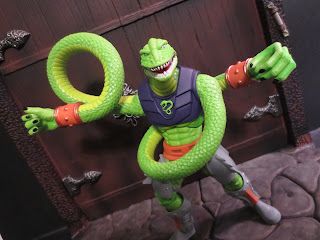 * Egad Holmes! Mattel worked out some excellent bendable appendages! They really had some struggles with Snout Spout (whose nose tends to rot off on most figures) but Sssqueeze's limbs are perfect! They have legitimate joints at the shoulders and wrists with bendable arms that really give you some great options when posing this guy. The rest of the body is a fairly standard MOTUC body (lots of unique parts, though) so it works pretty well. 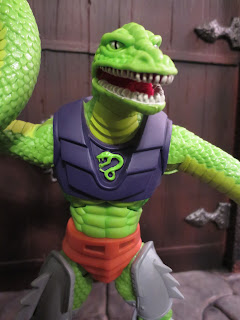 *The sculpt is awesome and it captures the perfect mixture of cool, silly, and frightening that makes MOTU so loved. This is a scary looking snake guy with lots of teeth, covered in excellent scales, and wearing a belly shirt. He looks nicely detailed yet also retains that toyetic quality that gives these figures such a nostalgic charm. The work on the scales and the armor is extremely impressive; Mattel and the Four Horsemen really went all out on this figure and it shows. 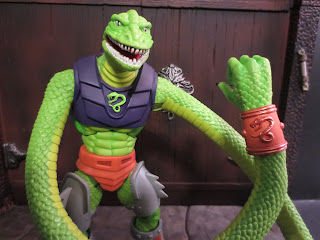 *95% of the paintwork on this guy is beautiful. The body actually has two tones, green and yellow, that give the figure a much richer look than a flat color scheme. His armor and gauntlets are impressive as well. I love the metallic paint used to edge the gauntlets. The green, purple, and orange color scheme is excellent and I love it. Of course, green, purple, and orange are three of the four primary Halloween colors (all that's missing is black) so you know I'm predisposed to liking this. 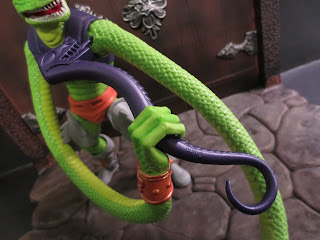 * While the vintage figure came with a bendable snake companion for Sssqueeze, the MOTUC update comes with what appears to be a weapon or a staff of some kind. It's not the same staff that has come with nearly all of the other Snake Men but a new, unique design. I like it. The sculpt is clean and the stylization of it gives it the appearance of some ancient relic of power which the Snake Men protect. It also has some metallic highlights over the purple paint job. Sssqueeze has no problem getting his hands around this accessory! 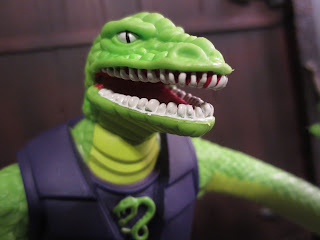 *I mentioned above that 95% of the paintwork on this figure was excellent. Well, that 5% or less is the teeth and gums. Sssqueeze's teeth and gums are a bit messy. The upper teeth look good but the lower ones have a lot of paint bleed going on. It's a minor issue but I've got to point it out, lest I be called a MOTU fanboy. 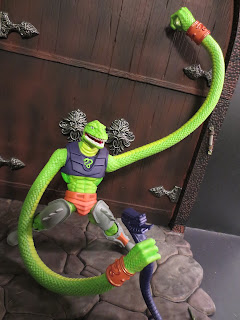 *I have to admit that Sssqueeze was not one of the figures I was most looking forward to nor was I an advocate of him actually having bendable arms like the vintage figure. I was really convinced that we'd have problems similar to previous bendy efforts on Mattel's part. Fortunately, Sssqueeze turned out to be an amazing toy. He's really a perfect example of what MOTUC can be when it fires on all cylinders and an Epic figure to boot! It's nice to have him and to have the Snake Men completed! Muahaha! Which faction do you think will get polished off next?


I've reviewed a metric ton of MOTUC figures, including...