Action Figure Review: Starfire from Red Hood and the Outlaws by DC Collectibles 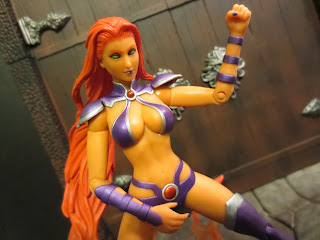 Last year I was absolutely thrilled when DC Collectibles released Red Hood/ Jason Todd in their Red Hood and the Outlaws action figure set. He was a prominent character and a member of the Bat Family so receiving him, the New 52 Batgirl, and Red Robin around the same time was a real treat (when are we going to get an updated Batwoman figure, though?). I didn't initially pick up the other two figures in the Red Hood and the Outlaws series but now that they've gone on sale at a number of E-tailers I've jumped on board. Today I'm looking at Starfire, a powerful hero who has had many ties to the Bat Family and the Justice league as well as prominent roles in the Teen Titans. The Tamaranean princess Koriand'r is know for being incredibly attractive and having a different way of seeing things than your average human. Mattel released a version of Starfire in a MattyCollector exclusive two-pack alongside Adam Strange a few years back but it was kind of a dud. Is this version of Starfire better? Find out for yourself after the break... 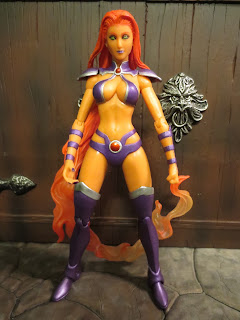 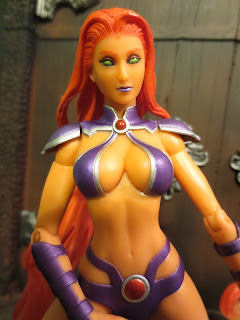 *As always seems to be the case, Starfire is another beautiful sculpt from DC Collectibles. She's gorgeous and features a very toned, curvy body sculpt. While her costume is somewhat minimal, it does feature numerous straps and such that are all separately sculpted and not painted on (as we often see from Marvel Legends and Mattel's DC offerings). It's this attention to detail that makes DC Collectibles' product worth picking up most of the time. The sculpting credit goes to Jack Matthews!

* Thanks to her vivid orange skin, breathtaking green eyes, and the metallic purple outfit she's wearing, she definitely stands out on the shelf. Starfire has a beautiful, alien quality about her that is rather refreshing. The paint work is very crisp and clean. 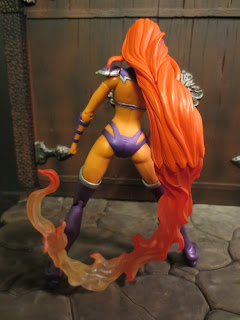 * Starfire's long, flowing hair is well sculpted and features some excellent paint applications in addition to some cool translucent plastic at the bottom that looks very flame-like. It's not as awesome as the hair on the Kotobukiya Bishoujo Starfire but it's still a hit. 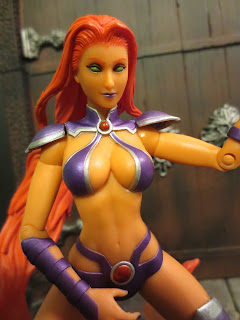 *DC Collectibles is pretty hit or miss on articulation. While on paper Starfire features a good number of joints, when you get your hands on her she feels very, very stiff. The hips just don't have a great range of motion, nor do the elbows. While I mentioned her incredible cool hair, it really limits her poses. It's heavy and unless you use it as a stand it just causes her to tumble over backwards. Those little articulated shoulder pads also tend to pop off and they're a pain to put back on. 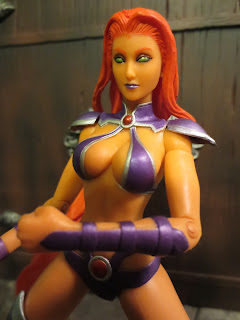 *I really wish Starfire came with some extra accessory. Honestly, I kind of wish part of her was detachable or that it could be attached to a fiery base. Since she can't stand well on her own this would have been a great extra. 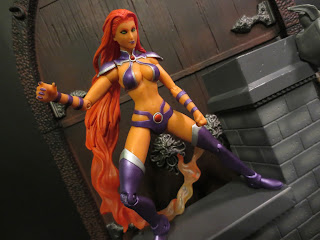 Starfire is not an excellent DC Collectibles figure but she is a very good one. I'd give her a Good and a 1/2, I think. She excels in all the areas that DC Collectibles usually excels in (sculpt and paint work) but she has some of the weaknesses that they've been fixing over the past year (questionable articulation and limited/ no accessories). She's still a much better figure than the DC universe Classics Starfire, though, and is an excellent addition to your DC shelf. I'm still waiting for my Arsenal to come in so I can assemble Red Hood and the Outlaws on my shelf! If you shop around you can probably find her for close to $15-$18 dollars. Red Hood himself was the tough figure to snag in this set and his price has been jumping up, so I'm glad I grabbed him when I did. With a new comic series and a new wardrobe, Starfire is continuing to be a popular DC Hero, so hopefully we'll see more of her down the road!