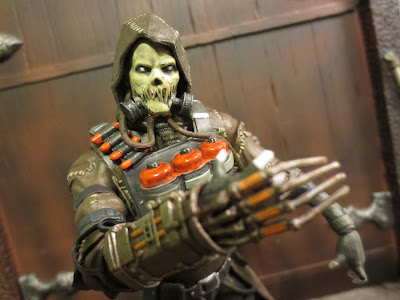 As of this writing I have completed the main story in Arkham Knight and have a total overall completion percentage of 93%. I'm going to try to avoid spoiling any plot points in this review so you shouldn't have to worry too much if you haven't played the game yet or are still playing through. Mostly I'll be talking about the toy although I have to reference Scarecrow's role in the game. Scarecrow was a supporting villain in Arkham Asylum, the subject of an Easter egg in Arkham City, made a cameo appearance (as Dr. Jonathan Crane) in Arkham Origins, and now, in Arkham Knight, he's graduated to being a primary antagonist. Yup, Scarecrow's the big baddie this time around and he looks and sounds fantastic in the game (he's voiced by John Noble). I've been extremely impressed by DC Collectible's Batman: Arkham Knight offerings and I knew that I'd have to pick up a Scarecrow for my collection. My wife and daughter picked him up for me as a Father's Day gift at Heroes Con last month. Want to see how does he stack up compared to the other figures in this line? Then join me after the break... 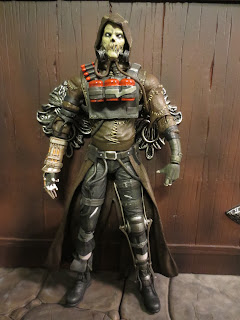 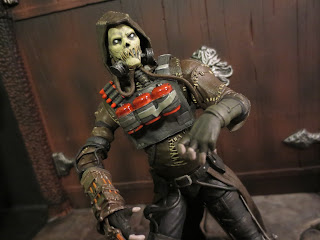 *DC Collectibles has always produced quality sculpts and Scarecrow is no exception. The Arkham-verse figures are always a treat as they're covered in interesting details. This looks mixes together a few of Scarecrow's previous looks as he has a burlap like mask (although a character in game states that they think it could actually be his real face), a long brown hooded robe (unevenly stitched together), and some various fear gas based storage tanks on his chest. He's also sporting a wicked gantlet used to inject his fear toxin directly into his victims. 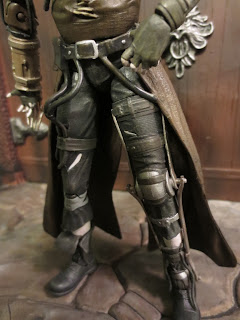 *The Scarecrow has some fairly complex gadgets, braces, and cords on his body that DC Collectibles has very nicely rendered on the figure. Due to his run in with Killer Croc in Arkham Asylum, Scarecrow is now sporting a metal brace on his left leg that actually moves along with the articulation. He's also wearing a vest that supports various tanks and tubes of fear gas for Scarecrow's nefarious purposes. The vest is made from a softer material and the wires running to and from it are quite convincing. The same can be said for the brace on his right elbow that helps keep his injector gauntlet on: It's also soft, pliable, and works with the joint. 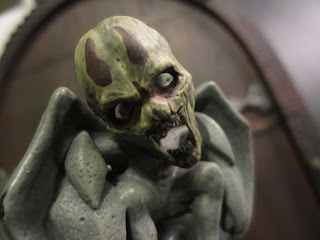 *Scarecrow only comes with one accessory, but it's a cool one: A creepy mask. I don't think this is a spoiler, but these do appear late in the game when you're searching for the Scarecrow. They're hanging all over the walls and the ceiling. The mask has an excellent paintjob and looks like it could fit on almost any other 6-7 inch figure. It actually fits well over Scarecrow's own head if you want to give him a different look. 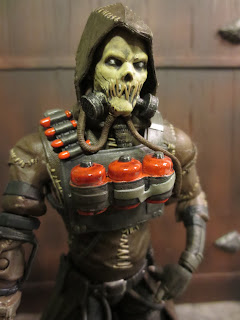 * I got this figure shortly before Arkham Knight came out and, as I sat playing Arkham Knight, I realized that the fear gas cans on Scarecrow's chest are quite inaccurate to the game. Go ahead and do a search: You'll see that I'm right! I'm not sure if this was a case of DC Collectibles basing their sculpt off of an early design or of laziness in their attention to detail. This is still a decent looking Scarecrow, but it's not as accurate as I would hope for considering the level of detail in the series. 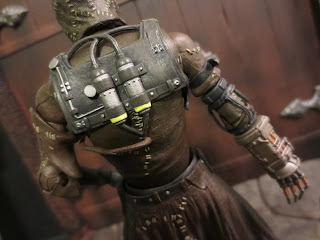 * While there are still quite a few nice joints on this figure, I'm really baffled as to why Scarecrow doesn't have swivel/hinge wrists like everyone else in the series. He only has swivels which feel limiting considering the nature of the character and the expressive gestures you'd expect from him. 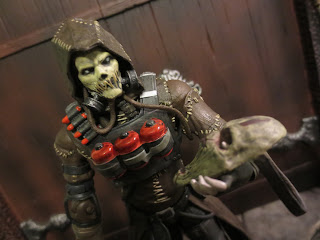 This isn't a bad Scarecrow figure at all. Far from it, actually. Unfortunately, it just doesn't feel as impressive as the other figures in the line so far. The articulation is more limited, the sculpt isn't as accurate, and the accessories are fewer. The Red Hood in this series is probably the greatest Red Hood figure yet released. The Harley Quinn in this series is possibly the best Harley Quinn action figure yet released, depending on your thoughts on her outfit. This Scarecrow, however, definitely doesn't feel as impressive as those two, however. I'd give him a Good and a 1/2 overall.