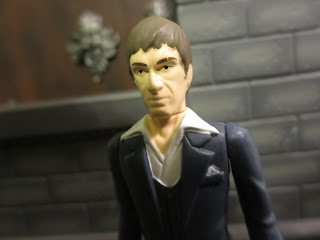 It's no secret that I'm a big fan of the ReAction style as I've reviewed around two dozen of these little buggers on the site and own a few more that I've never gotten around to reviewing. Besides just liking the style and characters, though, I love the diversity of licenses and characters offered under one banner. You know what it reminds me of? Movie Maniacs, Cult Classics, Now Playing, and other similar action figure lines from the late 90's and early 2000's that features the gimmick of multiple iconic characters who couldn't stand on their own but worked great as a set. The first series of McFarlane's Movie Maniacs brought about an extremely exciting time for the hobby of action figure collecting as it seemed to open the floodgates to companies trying to release the most outrageous, obscure, cult favorite toys that they could. While that period saw many new companies appear on the scene (and disappear, too), it didn't last forever. What Funko is doing with their ReAction line simultaneously makes me nostalgic for the 1980s and for the early 2000s. Bizarre huh? Anyways, today I'm looking at Tony Montana from Scarface. Is there anyone who isn't aware of Scarface? This figure of Tony is the only figure in the line but I thought he'd be an interesting guy to add to the shelf. Ready for a closer look? Then join me after the break... 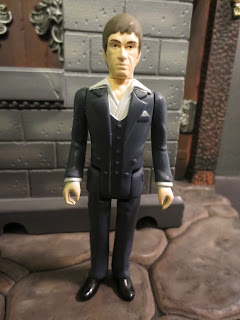 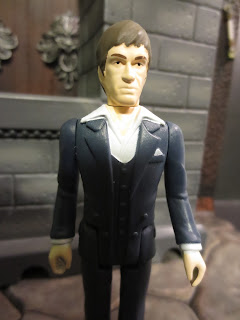 
*While some of the ReAction figures look nothing like the actors they're based on, Tony Montana really has a pretty good Al Pacino likeness. It's not perfect but, for the scale and style, it's definitely Pacino. Tony's suit has some nice detail as well. Nothing overwhelming or anything but this is clearly the suit he wears at the end of the film. 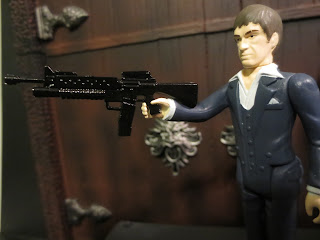 *Unless you count his balls and his word, the only other thing that Tony has is his M-16 machine gun with a grenade launcher mounted on it. This is his "little friend" and it's pretty accurately rendered from the film's finale. It fits snugly in Tony's right hand and is molded in a shiny black plastic. 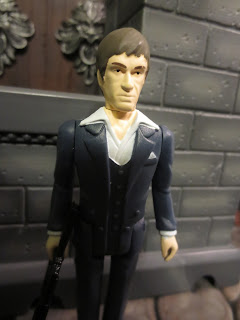 *The quality of the figure's plastic and articulation doesn't feel as good as most other current ReAction releases. He feels a bit lighter and looser. Also, my Tony Montana has a neck joint that seems stuck and which won't budge. I don't want to risk breaking his head off so I'm just leaving it alone.

*Tony's a decent depiction of the character but I really think some blood splatters on the figure would have made for a much more interesting toy, particularly due to the fact that this figure is clearly based on Tony's appearance in the climax of the film. I'm not really that big of a fan of Scarface but, as I mentioned above, he's a cool character to add to the shelf. I'm a big Pacino fan and I really like the headsculpt here (I'd love to see Funko tackle The Godfather) but the figure just doesn't feel as good as most other ReAction figures coming out this year. The looser articulation and stuck neck joint really turn me off a bit. If you're a collector of Scarface memorabilia (and I know there are many of you out there) you'll definitely be interested in adding this guy to your collection. Other collectors looking for a quick ReAction fix, though, might better options elsewhere.  He's an Eh and a 1/2 figure overall.