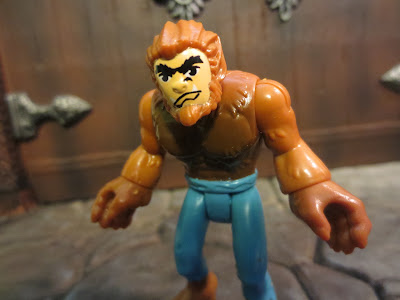 Finally! The Wolfman is here! Since the Mummy appeared in series 1 of the Imaginext Collectible Figure the dream has been to be able to assemble the core Universal Monsters in this line. Series 2 added Frankenstein's Monster into the mix while series 3 gave us Dracula and the very cool Gillman. Series 4 didn't have the Wolfman figure that we all expected, so we were left without the Monster Squad crew for a bit longer (although the Witch was still an nice addition). Finally, though, we have the Wolfman. Arooo! Ready for a look at this guy? Grab yourself some wolfsbane and a silver bullet and join me after the break... 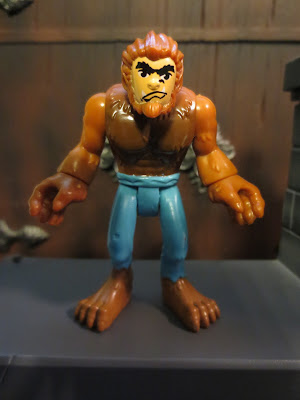 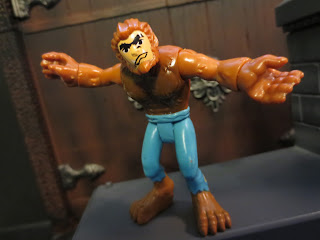 * I love how unique each Imaginext figure is! The sculpt and paint are always a treat and even though the majority of the figures are built the same way, the unique sculpts really help differentiate every figure in the line. The Wolfman has some excellent tufts of fur sculpted onto his body. He's even sculpted with a bit of a hunch as well, showing off his canine features. His jeans are a bit tattered but are still hanging on to his new physique. This is an excellent classic depiction of your garden variety Wolfman. 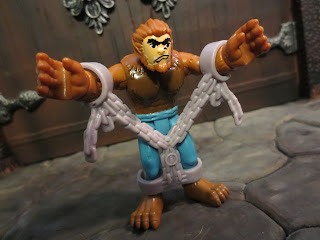 * Nearly every Imaginext figure comes with some cool little extra and the Woflman is no exception! He comes with a set of shackles that have been used to try and contain his rage. Did he put these on voluntarily or has he been captured by a werewolf hunter? Who knows? The sculpt is nice and the Wolfman easily fits inside. 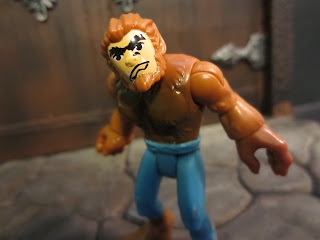 * The Wolfman doesn't have a bad headsculpt and face, but I wish his mouth were showing more teeth rather than just having a bit of a frown with two teeth painted on. Something a bit more monstrous would have definitely been preferable. 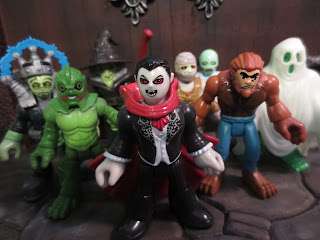 While the Wolfman is probably the most anticipated figure in this series due to him adding more to the main Universal Monsters roster (will we ever see a Bride of Frankenstein in some more generic fashion here?) he turned out to not be the best figure in series 5. That's not because he's a bad figure, though: It's because most of this wave has just been insanely good. At the end of the day this guy gets a Great rating. He's well worth picking up, but he's just not as impressive as the Ghost, the Ogre, or the Fly.


I've reviewed six other figures from this series so far: Cyclops, Chinese Warrior. Genie, the Fly, the Crash Test Dummy, and the Ghost.