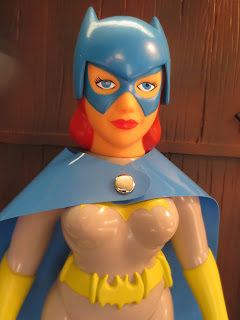 One of the interesting things about collecting merchandise featuring a specific character is that you often end up venturing outside of your collecting norms. By and large I tend to purchase (and review) the same kinds of things: 6-7 inch action figures, 1/18th scale faux retro figures, and minifigures. Collecting a variety Batgirl stuff not gives me a chance to pick up various interpretations of a character I love but also the opportunity to experience many different types of collectibles. Today I'm looking at a Sofubi, or Japanese soft vinyl, version of Batgirl from Medicom. I remember seeing plenty of Medicom's offerings years ago in the back of Lee's Action Figure New and Toy Review but I don't believe I've ever owned anything from the company until now. Batgirl comes from their DC Comics Retro Sofubi Collection, a line that seems to blend the vintage Mego styles of DC Characters with the Sofubi form. I wasn't at all familiar with this style of figure but, after watching this video review from Daring Doodads, I decided to snag her. Want to see more? Then join me after the break... 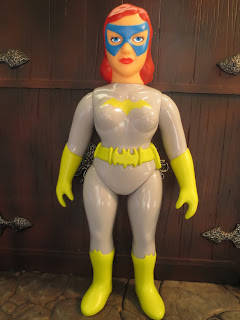 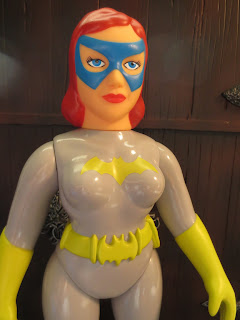 * I really like the sculpt and proportions of the figure.It's definitely different from what we see in most action figure and toylines. Everything is very rounded and smooth. She's definitely light, as you'd expect from a soft vinyl figure, but she doesn't feel flimsy or cheap. The sculpted elements of her costume such as the belt, boots, and gloves are well done while the rest of the detail is kept to a minimum. The paintwork is clean and neat across the board. 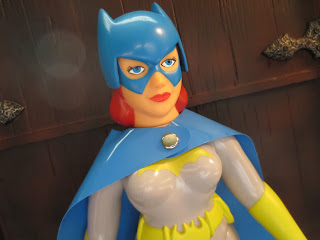 * Babs comes with a removable cape and the helmet cowl. The cape is made from thin vinyl and reminds me of the capes on the Kenner Star Wars figures. It uses a metal fastener to keep it secured tightly around her neck. The cowl is the helmet styled cowl that really reminds me of the old Mego Batgirl. It looks great on her head, but removing it really does give Batgirl an alternate look since her mask is part of the headsculpt. 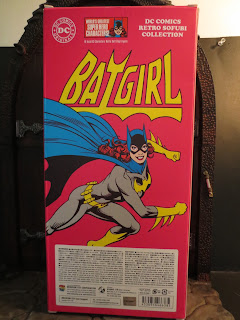 * I rarely talk about packaging but I feel like this packaging really helps to make the figure. It's sturdy, collector friendly (once you remove a few twist ties), and and very well designed. I love the bright pink and yellow chosen for the figure: It does remind me of the Mego packages of the 1970s (I'm not that old, by the way, but I'm definitely familiar with Mego) and has a very retro feel to it. 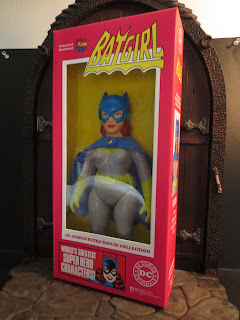 *Here's another picture of the packaging from the front. I'm really contemplating leaving Batgirl in the package while on display. While there's a lot of quality work here, the figure still reminds me of either a retro toy or a well done bootleg. That's not a bad thing here, though, since it seems to be a part of the style. 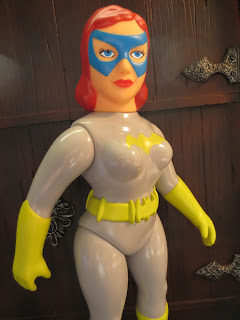 *I have two negatives: First, I really wish there had been another point of articulation or two on the figure. A swivel waist and maybe swivel wrists would have been quite welcome. Secondly, the price. I don't usually talk about the price that much but considering this figure has an MSRP of $80, I'm a bit baffled. This is a cool figure but there's nothing here worth that much money. I'm sure there are a few folks who collect these figures but with the exception of collectors picking up their favorite character, I'm not sure what the market is. Is Sofubi collecting a huge sub-genre of collecting that I'm just entirely unfamiliar with?

I initially passed on this figure but after watching the video review I posted above and learning a little bit more about this line, I decided to pick Batgirl up. I'm certainly glad I did as this is an interesting toy. I love the retro feel and the simplicity of the design and accessories. It's a bit pricy, however, and it's definitely not the kind of line I'd jump into and pick up other characters from.  Overall, I'm giving this a Good and a 1/2. If you're a huge Batgirl fan or a Sofubi collector, this is a nice pickup. Other collectors can probably find items for the same cost (or less) that they'll be much happier to own.

I'm a huge Batgirl fan and I've reviewed a ton of Batgirl products. If you have something Batgirl related that you don't see here or in my collection and you'd like to sell it or arrange a trade, just leave a comment on one of the reviews below and I'll see it (I check comments almost every day!):