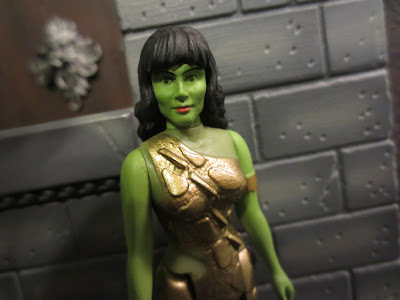 Want to know what Star Wars and Star Trek both have in common? Green dancing women. That's what, and it's actually one of the few areas where I think Star Trek beats out Star Wars. Oola is cool and all but not only did Star Trek have Susan Oliver as Vina, who I'm reviewing today, but they also had Yvonne Craig as Marta in the season 3 episode "Whom Gods Destroy." Vina was featured in the original pilot episode, "The Cage," and the first season episode "The Menagerie" which reused a great deal of footage from the pilot. Need an Orion to spice up your retro action shelf? Then join me after the break... 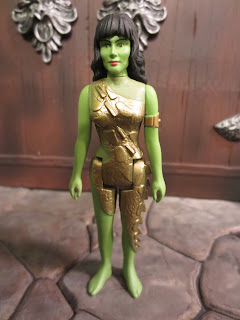 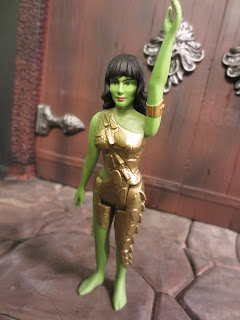 
* With every new release in the ReAction collection Funko seems to be continually improving their figures. The plastic quality and joints just feel better and sturdier overall. 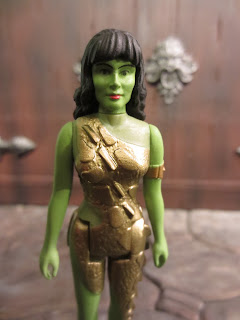 * When it comes to sculpts I believe that Funko is finally starting to really find their stride. Vina's sculpt beautifully combines the simplicity of the retro action figures Funko is paying homage too while still nicely capturing character likenesses. Some of last year's figures were a little too rough (I'm thinking the Back to the Future, Firefly, and Goonies lines in particular) but this year has been hit after hit. The dress is nicely sculpted, although a plastic or cloth skirt would have been a nice period appropriate addition. 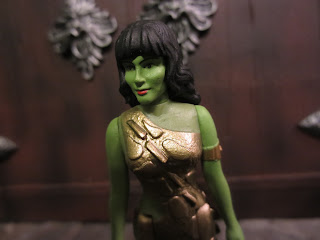 *Her hair is black here, but on the show it seemed a bit more reddish, perhaps even auburn. This definitely feels more like an oversight versus an intentional "inaccuracy" for the sake of being era specific. 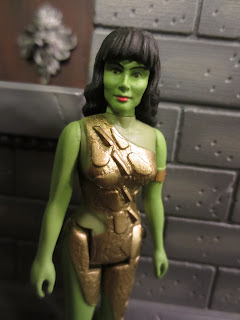 I really like Vina. I love the offbeat characters that we get sometimes in the ReAction series as they're sometimes the most fun. Whether you want to put Vina with your vintage aliens from Jabba's Palace, have her chill out with the Firefly crew, or let her team up with your Legends of Cthulhu Professor, you'll be in good shape. Of course, you could also have her hang out with your other Star Trek ReAction figures. That makes sense, too. Anyways, this is another fine ReAction figure and I'm giving her a Great rating.