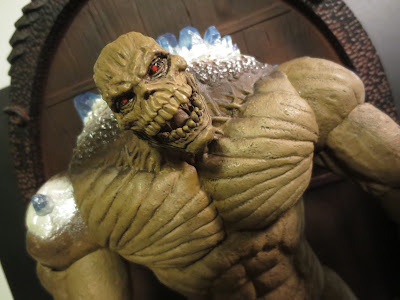 I think it's extremely probable that DC Collectibles' work on the Batman: Arkham-verse games has created the fullest, most robust action figure line of Batman heroes and villains in one fairly consistent style. Even though the game has almost been out for 4 years, DC Collectibles saw it fit to release what I believe is the largest 7-inch scaled figure they've ever produced: Clayface! While Clayface had a cameo appearance in Batman: Arkham Asylum, his role in Batman: Arkham City was far more substantial. Considering the game has been out for a few years and has had both a sequel and a prequel, I don't imagine anyone who cares isn't already aware of the game's plot but just be forewarned that this Clayface figure really does give away a major plot twist from the game. This is your warning!

I knew this figure was coming out and had been paying attention to it, but it was actually this review from Phantom Troublemaker at Needless Things that finally gave me the confidence to jump in and purchase this big guy. I'm happy to report that the quality is much better than some of the previous oversized DC Collectibles figures. Anyways, ready to look at an absolutely massive Clayface action figure (seriously this guy would look suitable monstrous next to most 1/6th scale figures)? Then join me after the break... 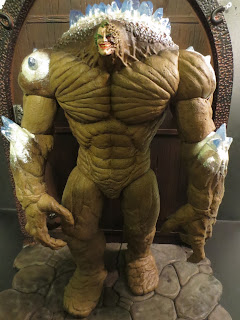 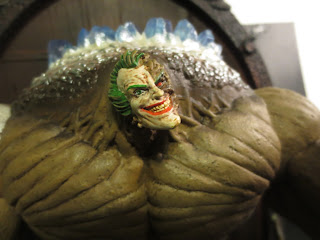 *So, here's the big spoiler: Clayface has a Joker head. Why's that? Because the "healthy" Joker in Arkham City isn't the real Joker at all. It's Clayface in disguise. Since the real Joker is infected and on the verge of death, Clayface is imitating him. This is an excellent headsculpt and features the brilliant amalgamation of the Arkham-verse Joker with the twisting, churning movement suggesting Clayface's shape-shifting powers. 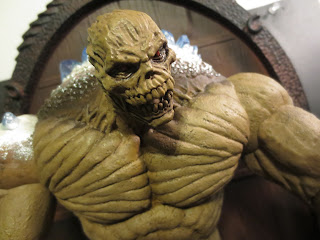 * The Clayface head sculpt is also pretty impressive. Arkham City's Clayface (Basil Karlo) is clearly inspired by the Batman: The Animated Series's version of  Clayface (Matt Hagen) but it's much more sinister. Almost skull like, really. The deep-set eyes, red pupils, and uneven teeth are expertly rendered here. Phil Ramirez is credited with the sculpting here and has done an excellent job. 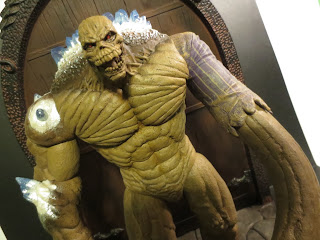 * Seriously, this guy is a behemoth. He's very, very heavy (almost 7 pounds!) and is just massive. Seriously, he dwarfs pretty much every other DC Collectibles figure with the exception of the Arkham City Solomon Grundy. While Clayface is typically thought of as just a lump mass of brown goo, this Clayface actually has some defined body structure and a great, gritty texture. The paintwork also backs up excellent sculpting. 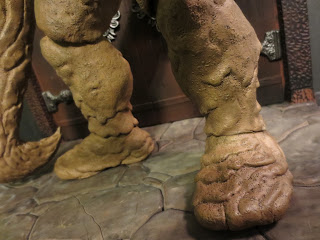 * Just because his torso is a bit ripped doesn't mean he's still not gloppy in a few places, though. The great sculpting really conveys the gloppiness around Clayface's feet. It almost looks like it's pooling there as it drips down his shins. 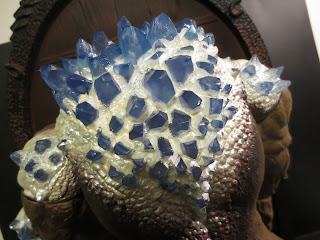 * DC Collectibles made the decision to include various ice shards on Clayface's back, shoulders, and forearms. For those who haven't played the game, Batman uses his freeze cluster grenades to fight Clayface and thus these ice shards are representative of the final boss fight in the game. They're awesome and feature some very detailed sculpting. I love the translucent plastic used here for the ice shards and the almost glittery frost covering the figure. I know these ice shards make Clayface very scene specific but it also helps make him a much more interesting figure. For a figure that would have just been a mass of brown, I think the decision to break things up with the ice really works. 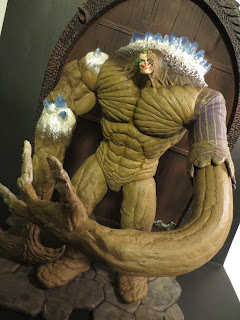 *Clayface features alternate, swappable arms. The first is a second alternate Joker inspired arm left arm. Interestingly, the arm is detached by pushing one of the ice crystals on Clayface's back straight in and pulling out on the shoulder (there is an instruction sheet included). It was really difficult the first time I swapped arms but it got easier after a time or two. This arm features a partial Joker sleeve and a long, bendable arm with bendable fingers. It's a very interesting look and looks great with the Joker head displayed. 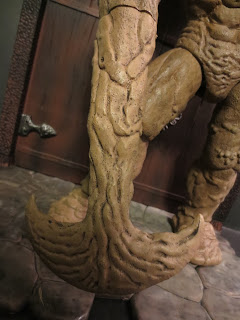 *The second swappable part is Clayface's right hand. It easily pulls out of it's socket and can be swapped with an extended bladed appendage. It looks really cool and definitely gives the figure a more menacing vibe. The socket is extremely sturdy and doesn't feel breakable in the least. The quality control on this guy is quite impressive. 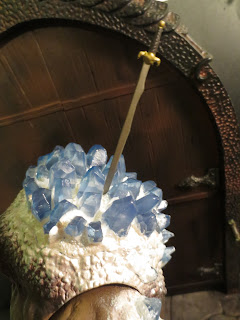 * The last accessory included with Clayface is Talia al Ghul's sword. It's almost identical to the sword that came with the Arkham City Talia al Ghul figure that was released in 2013. There's actually a slot in Clayface's back where the sword can rest (it's a part of the boss fight in the game). 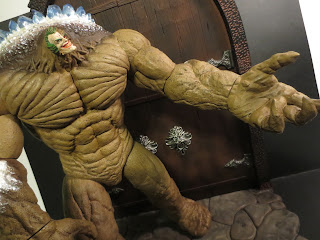 *This guy is big and sturdy but unfortunately he's not very mobile. I'm not really that upset by this as this is more of a figure that just stands around looking menacing versus being one that you actively play with, but I do feel that some of his joints are far too limited. He elbows really could use a wider range of motion. 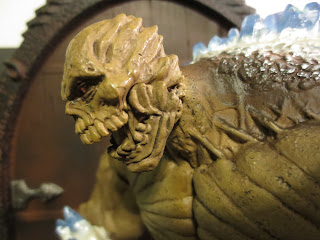 *While Clayface features swappable limbs, his head is not swappable. The Clayface head is actually a "helmet" that fits over the permanently attached Joker head.It's tricky to position the main head on correctly and it doesn't always want to stay on snugly. I really wish we would have gotten separate swappable heads. 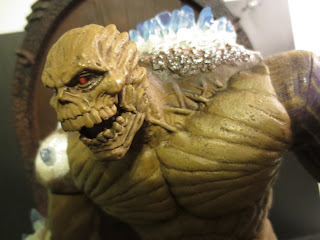 I really like this figure. He's not a perfect toy, due to the mobility issues, but he's a darn fine display piece. Some figures just have that "oomph" that makes them stand out on your shelf and I believe Clayface is one of those figures. Clayface is a Batman villain who really hasn't been turned into an action figure many times so it's pretty nice to have an extremely impressive version of him. He's not as visually interesting as Solomon Grundy but he's a figure that I don't think many Arkham fans thought DC Collectibles would ever get to. He's a Great and a 1/2 figure and really shows how far DC Collectibles has come over the past few years. While Masters of the Universe Classics is still my favorite toyline, DC Collectibles is quite possibly the company that puts out the most interesting and easily available products. They really are constantly one upping themselves and giving Batman (and DC fans) plenty of great additions to our collections!

I've reviewed a number of Arkham-verse figures, including: