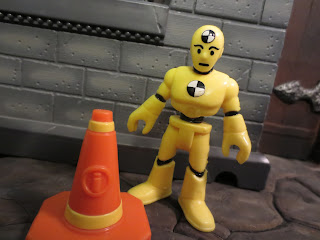 Looking for the lyrics to the song "Mmm Mmm Mmm Mmm" perhaps? Sorry, you might be in the wrong place. How about information about Tyco's The Incredible Crash Dummies action figure line? Well, nope, not right now. Automobile safety? Note even close! Today I'm looking at the Crash Test Dummy from Fisher-Price's Imaginext Collectible Figures Series 5. So far I've raved about this series: Both the Chinese Warrior and the Genie have been cool while the Ghost, Fly, and Ogre have been fan-freaking-tastic. When I first saw this set online I thought that there wasn't a weak figure in the bunch. It turns out that I was wrong, thanks to the Crash Test Dummy. Want to find out why? Then join me after the break... 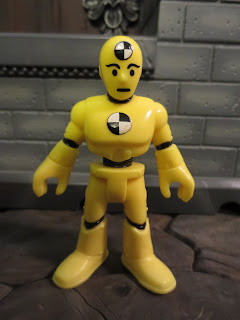 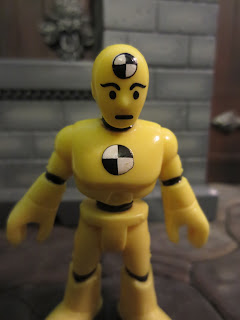 
*I always start with the positives, so I cannot deny that this is a nice looking minifigure. He retains the standard Imaginext style regarding his proportions and such while still having a body reminiscent of a real life crash test dummy (he also looks just a bit like C-3PO). The paint applications are pretty neat and clean and he (or she) has a very plain, expressionless facial expression. 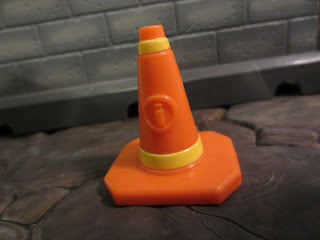 * All of the Imaginext blind-bagged figures so far have come with some accessory and the Crash Test Dummy is no different. It comes with a cool plastic road cone molded in bright orange plastic. This is a nice accessory that makes sense for the dummy or any city scene you might want to create. The yellow stripes and the Imaginext "I" help to spice this up a bit. 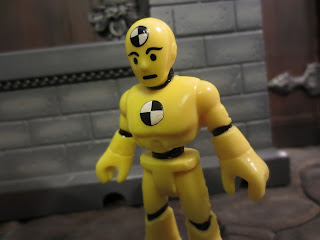 * So...the Crash Test Dummy is not built like a regular Imaginext figure. It is instead simply a solid piece of rubbery plastic. I was really shocked when I opened this figure as I assumed it would have the same articulation as every other figure in the line. I'm not opposed to Fisher-Price trying something unique with a figure (different figures have different needs) but this guy isn't even a bendy toy: He's just rubbery. He really can't sit properly in any Imaginext vehicle that I own nor can he interact much. He's a big rubbery mannequin. I have to admit that I'm pretty disappointed in how he turned out as I had high hopes for him. I can kind of see what Fisher-Price was going for but the execution just feels very underwhelming. 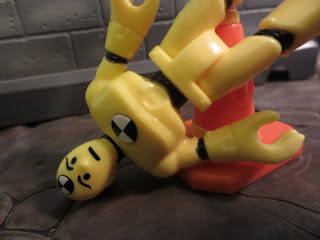 So far every Imaginext wave has had at least one figure that just hasn't my thing. Typically there's a sports figure or two that I own but largely ignore. The Crash Test Dummy is a figure that I really want to like but the rubbery body with no articulation just aggravates me. It seems like a cop out if you ask me. A regular, articulated Crash Test Dummy would have been awesome and would have awaken some of my childhood nostalgia for Tyco's The Incredible Crash Test Dummies (a toyline that is really pretty dark when you think about it), but instead we get a pretty lackluster offering. In the end, I'm giving this figure an Eh and a 1/2. It's not the end of the world, but it really only is for folks who want the whole set of figures or who really, really like crash test dummies (but not the band Crash Test Dummies).

I've reviewed five other figures from this series so far: Cyclops, Chinese Warrior. Genie, the Fly, and the Ghost.