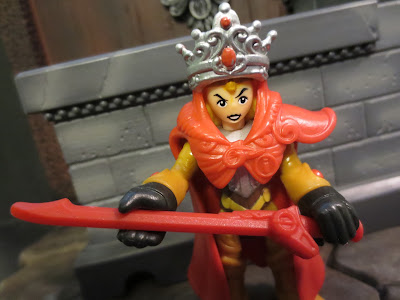 Well, here's the last (but certainly not the least) figure from Imaginext series 5: Warrior Queen! Who is the Warrior Queen? As I've been looking at her for the past few days I keep seeing elements of different characters who perhaps inspired this figure. While she looks like the archetypal fantasy female warrior, I'm seeing shades of Eowyn from The Lord of the Rings and perhaps even elements of Daenerys Targaryen (the hair). If someone sees more direct inspiration, please let me know! Anyways, the Warrior Queen is the only female figure in series 5 (well, the Crash Test Dummy could go either way, I imagine) and makes a excellent addition to the other fantasy or medieval Imaginext figures. Ready for a closer look? Then join me after the break... 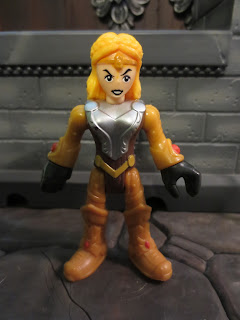 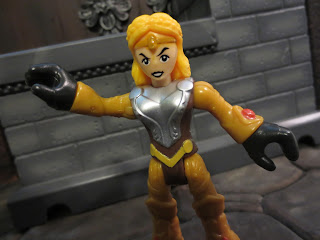 *The Warrior Queen is another sturdy fighter for you Imaginext collection. Everything works just as intended and you can have quite a bit of fun having her battle your other Imaginext figures. She seems like quite a monster hunter to me, so I'll be pitting her against my Imaginext Monster Squad. 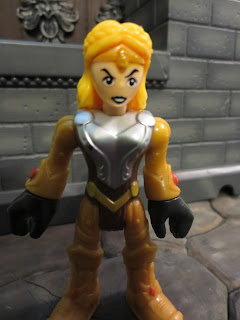 * Her armor is extremely detailed with a number of different paint and plastic colors to add variation to the mix. The basic armor is made up of ornate plates and has cool red gems on it. Something about this armor gives me a Masters of the Universe 200x vibe. The breastplate is painted silver and looks like it could definitely take some damage. She's also got a cool tiara or circlet on her forehead. Fashion accessory or enchanted magical item? Who knows? It looks sweet, though. 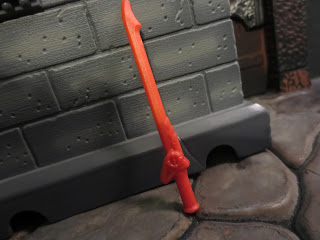 *I'm loving this sword. It has a very cool fantasy feel to it without being too over the top. It easily looks like it could be found in a Final Fantasy game. It's fairly solid and fits nicely in either of the Warrior Queen's hands. 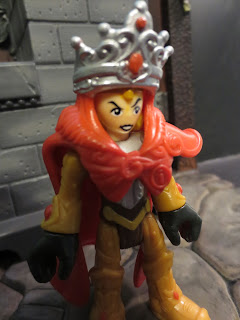 * I'm not a big fan of this outfit, particularly because of the paintwork. This is a rubbery plastic piece that fits over her head and torso and gives her a cloak, some extra shoulder armor, and her crown. These things look decent, even if they're not painted that uniquely. What really bites, though, is that this piece seems to have an attached wig that is simply red. Usually the additional Imaginext pieces really compliment the figure but this is one of those rare times that I think the figure looks better without the extra armor. The Imaginext "I" logo as a clasp for the cloak is a neat touch, though. 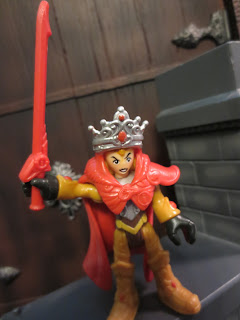 Here's another excellent Imaginext figure that adds both another warrior and another female to the mix. As it stands, I'm giving this figure a Great rating. I'd rate her higher but I'm just not digging the armor overlay. It just doesn't look that great. The basic figure is solid, though, and a very well designed piece. I've now reviewed all of the very surprising Imaginext Collectible Series 5, so here's my ranking for this series:
8th Crash Test Dummy
7th Chinese Warrior
6th Warrior Queen
5th Genie
4th Wolfman
3rd Cyclops
2nd Fly
1st Ghost