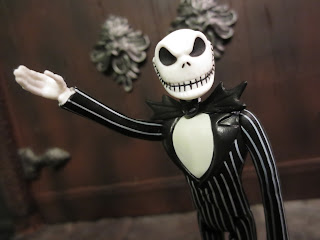 I've been a fan of The Nightmare Before Christmas since it came out in theaters in 1993. I'm not trying to sound like a hipster or anything but I remember a time when not everyone loved the movie. Heck, until it hit VHS I remember most of my friends not even knowing what the movie was. My parents took me to see it it, however, as I've always loved Halloween and this movie was a perfect Halloween treat for 11 year old me. When the movie hit theaters I had purchased a number of the toys (many from Suncoast!) and still have a number of my originals. My wife is also a huge fan, so our house if filled with a number of Nightmare Before Christmas themed trinkets: Salt and pepper shakers, pillows, jewelry, storage boxes, framed pictures, and plenty of toys! While I have a very decent sized collection of the beautiful (but fragile) NECA Nightmare Before Christmas and haven't really felt the need to pick up any new figure series since their release, I was interested in owning a Jack to go with my ReAction collection. During a buy 2 get one free sale at Toys 'R Us a few weeks ago I finally saw the opportunity and added the Pumpkin King to my collection. Ready for a closer look? Then join me after the beak... 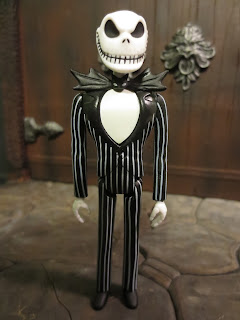 Accessories: Book and Pumpkin with ghost. 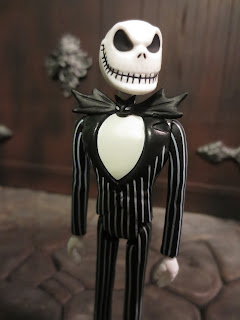 
* ReAction figures adhere to a classic Kenner aesthetic which works just fine for most of the properties that feature ordinary looking people. Nightmare Before Christmas, however, is incredibly stylized and features characters with unusual proportions and designs. I really wasn't sure how I'd feel about these characters represented in the ReAction style but I have to say that, at least for Jack, it works. Even though he's not spindly he still manages to look tall and thin. Funko did a nice job translating Jack into this style as he really looks like he belongs. 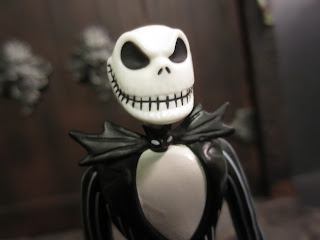 *There are a few different head sculpt variants for Jack in this line: Smiling, surprised, the SDCC exclusive grinning version, and the evil smile. I went with the evil smile. This is a nice Jack head sculpt and is really quite fun. It looks great, especially with how it's paired with the nice work done on his bat bow-tie. 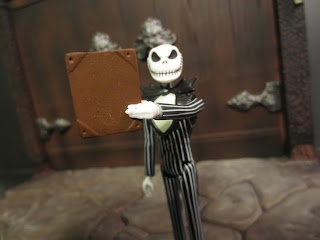 * Jack comes with two accessories and they're both pretty nice. The first is one of the books he uses in the film. It's a simple accessory but I find that action figure scaled book are always cool. I love it, particularly the detail work on the corners. 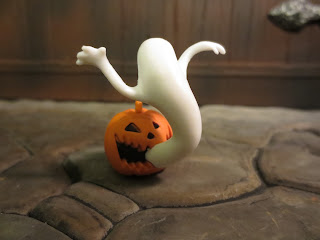 * NECA's Nightmare Before Christmas line was incredibly comprehensive and covered almost every character and accessory you could possibly thing of. Well, except for the ghosts coming out of the pumpkins that is! Yeah, NECA released a ton of pumpkins but none with a ghost coming out! I love this accessory as it captures a really cool moment from the movie! It's definitely more elaborate than any Kenner era accessory, but that's not a bad thing, is it?

*I really don't have any. This is a simple figure with nice accessories. There's nothing I can see that Funko really did wrong here. 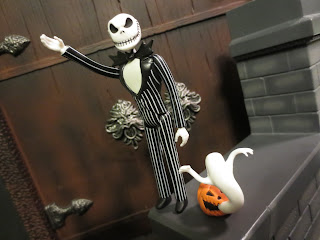 The Nightmare Before Christmas has truly become a holiday classic (for both Halloween and Christmas!) and Jack Skellington is one of those characters that some folks love to collect. The ReAction version of the character is quite unique in it's depiction of Jack's proportions as a more traditional action figure, so it adds something unique to the mix. This is a nice figure and an interesting property for the ReAction style. Jack's easily as Great and a 1/2 figure and worth tracking down. There's supposed to be a series 2 coming at some point, so hopefully we'll see a Pumpkin King Jack (my favorite) or a Santa Jack!

I'm not sure I've reviewed anything else Nightmare Before Christmas related on this site before but I have reviewed the following ReAction figures: