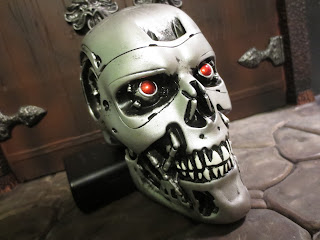 A few months ago I did a six month subscription to Loot Crate. It's a neat service and I definitely enjoyed getting each crate but at the end of the day I realized that there were many things in each crate that I just didn't intend to keep.  June's crate was my last in the sub and pretty much the crate that caused me to decide not to re-up my sub. Still, there was something in the crate that I thought was pretty nifty: This 1/2 Scale Endo Skull from Terminator Genisys. It seems that I was one of the few people who really enjoyed the movie (largely thanks to Emilia Clarke) but I imagine any Terminator fan would be intrigued to have an Endoskeleton skull sitting on their desk. This came in the Loot Crate packaged in it's own separate window box and was manufactured by a company called Chronicle Collectibles. It's made from rotocast plastic and while it doesn't weigh very much, it also it quite sturdy and won't break if you drop it. Ready for a quick look? Then join me after the break... 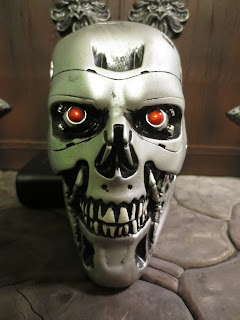 Size: 1/2 scale (about half the size of your average human skull)

Non-Scalper Price: Included with a $12-$14 Loot Crate along with lots of other stuff. 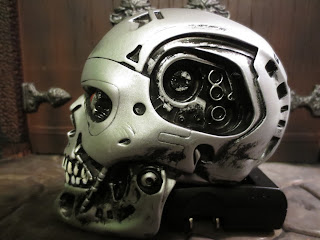 * The paint work is actually pretty nice on this item. This is definitely a low end prop replica/ collectible piece, but from a distance it actually looks pretty sharp. There's a lot of drybrushing on the skull that gives it an excellent weathered look. The eyes are bright and shiny as well and actually look fairly accurate given that they're not made from a translucent material. 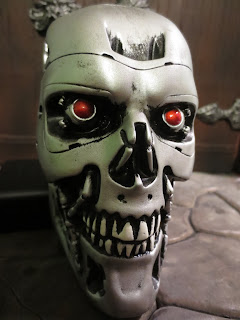 *Some rotocast vinyl items sometimes have softer sculpts but I think that hurts the look and appearance of the Endo Skull to much. It looks really nice and is covered with an impressive amount of detail for a small, low cost item. There are lots of sunken in places in the skull such as the edges of the jaws and the sides of the cranium that give this a very intricate feel. 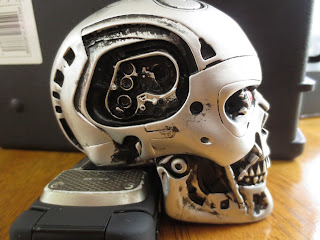 *One of the things you might notice is that in every picture I have the skull propped up with either my cellphone or the battery charger for my camera. The piece has no display stand and, unfortunately, it cannot stand well on it's own. Setting this down flat causes the skull to lean back and rest looking up. Even a simple plastic stand would have greatly improved the display quality of the piece. 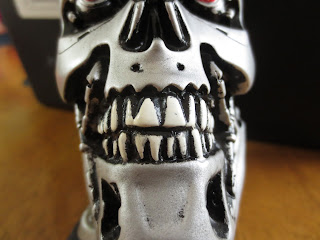 *For the price of this piece this is a minor nitpick but I'm not sold on the teeth. They're the only part of the sculpt that looks less like a prop replica and more like a cheap Halloween decoration. The eerily realistic quality of the Endoskeleton's teeth are one of the most defining features of that design and it's a bit of a shame to see them lacking here. 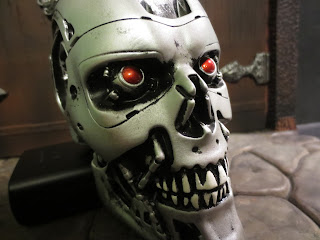 Considering this came in a Loot Crate along with some other stuff, I think it's a pretty solid item. Not sure where you can find one of these if you didn't subscribe (maybe on E-bay or through a friend who ordered but doesn't want their 1/2 scale skull) but if you're a Terminator fan this is a rather cool, low cost collectible. I'll happily display this on  my shelf next to my NECA, McFarlane, Kenner, and Funko Terminator figures. For the price and size, this is a Good and a 1/2 item!

Oddly enough, I haven't reviewed any other Terminator stuff here on this site. That will soon change, I imagine!
Posted by Barbecue17 at 7/21/2015