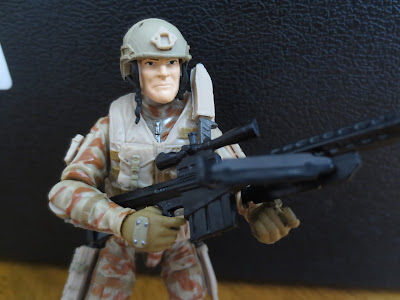 I've been buying the amazingly detailed 1/18th scaled figures from Marauders, Inc. since 2007 and I've really enjoyed watching the company grow. They continue to offer more and more detailed weapons and accessories for 1/18th scaled toylines such as G.I. Joe and Star Wars. Finally, however, Marauders, Inc. has taken the plunge and created their own action figure line. Last year through Kickstarter they launched a campaign to help fund their new extremely customizable action figure line, Marauder Task Force. I jumped in and supported the line at the level that got me three different figures and over the next few days I'm going to show those figures off. One thing to keep in mind is that these figures are very much sold by the piece. On their website you actually order the body, the head, and the various pieces and accessories separately, essentially building your figure. It's kind of like Build a Bear for military enthusiasts. For the Kickstarter campaign Marausers, Inc. through in stands, weapons, and some extra pieces, so your buying experience will differ a bit. Today I'm looking at the first figure I received from the campaign, the Desert Ops Trooper. More details after the break... 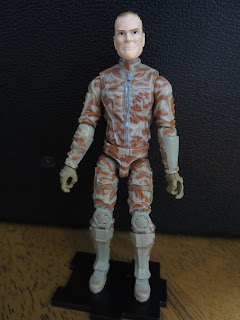 Non-Scalper Price: The base body is $11.99 while the accessories are all sold separately. You can probably build the custom figure you want for around $20-$25 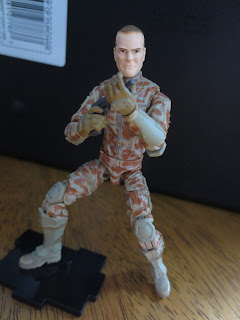 * The articulation is really, really well thought out on this figure. For the most part the base body is built like most of the post Pursuit of Cobra/30th Anniversary/ 50th Anniversary G.I. Joe figures. Rather than a mid-torso joint, however, the figures have a ball jointed waist that helps to preserve the flow of the sculpt better and isn't inhibited by the various tactical vests the figure can well. 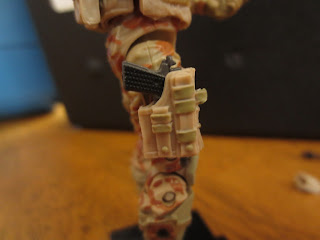 *Besides the ridiculous number of additional accessories available, the figure itself is also more easily customizable than your average G.I. Joe. The heads are easily removable ball joints while the legs can be removed at the hips and the torso is fairly easily removed at the waist. You can easily customize these guys without ever needing to use the boil and pop method. 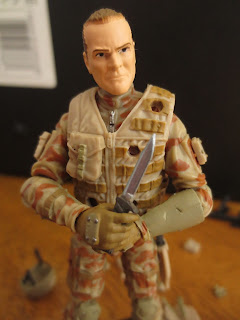 *The sculpt of the base figure and the included headsculpt is impressive. With the Marauder Task Force line, Marauders, Inc. is really giving collectors the chance to create whatever modern military figures they want to create. The base body is a standard tactical jumpsuit that looks great (lots of folds, pouches, and straps) but is still generic enough to work in a variety of situations. The gloves and boots are nicely armored without looking too out of place. 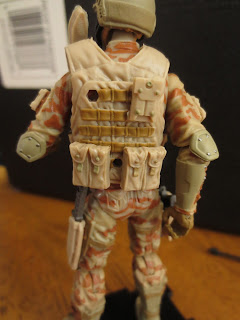 *The desert camouflage is well done. It looks very natural. The little rivets on the knee pads and the zipper on the jumpsuit chest is also neat and clean. The headsculpt's paint is simple and effective. 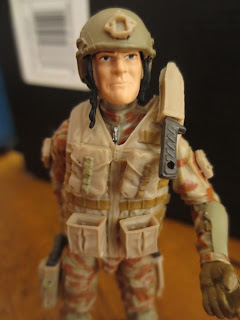 *The various accessories and outfit elements you can add onto the figure are the meat and potatoes of the line. There's so much you can do here! Multiple types of pouches, pistol holsters for the left and right handed soldier, and even magazine containers that hold magazines from the various Marauders, Inc. weapons. Besides what's available here, there is so much versatility with this system. I'm really interested to see what various customizers come up with having access to this. 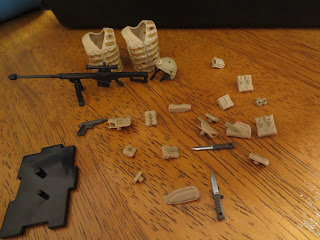 *Marauders, Inc.stresses that these are not toy but collector's figures. This makes sense as they know who their target audience is and they probably don't want to deal with the hassles of parents buying these for little kids and losing the pieces or of having to do extensive and pointless safety testing. That doesn't bother me in the least. What is a bit frustrating, though, is that the hips are very, very loose. Often just simply trying to pose this guy causes his legs to fall off. I appreciate the level of customization these figures inspire but the hips could stand to be a bit tighter. 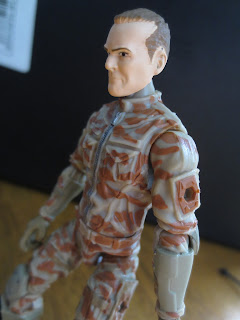 *Since these are intended for hobbyists rather than kids, sometimes the little extra pieces don't fit perfectly. Usually they do but every now and then you'll find a peg that's a bit too loose. Marauders, Inc. suggests using glue to keep the pieces on. I'm not much of a gluing my toys kind of guy, so I'll have to live with a few loose pieces.

Once again, Marauders, Inc. has taken 1/18th scale military collecting to the next level. I imagine serious customizers, army builders, and military enthusiasts will have a field day with these. While you're paying a bit more than you'd pay for a store bought G.I. Joe (you know, if you can find those anymore) considering that most new G.I. Joe figures come through the collector's club or as convention exclusives you're probably getting a much better deal here. I'm not the target audience for these but I'm still amazed by how well crafted they are. Despite the looser legs and pegs (intended to aid customization) these are still really well crafted toys. These remind me a bit of upgraded versions of some of the action figures that 21st Century Toys put out in the early 2000s (I'm thinking of their Platoon line) that features removal webgear, pouches, and such. These are some Great 1/18th scale figures and I'd love to see Marauders, Inc. one day move into creating unique characters in this line. I'd be extremely interested in those!