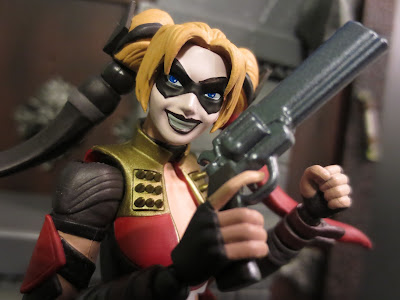 I'm just going to say it: Harley here might just be the figure to beat this year for the title of best action figure. As far as I am aware this is the first figure from Bandai's S.H. Figuarts brand that I own and, I must say, I am beyond impressed. I was really interested in this figure because it's based on the videogame Injustice: Gods Among Us, of which I was a fan. The game's been out for over two years now and there have only been a few Mattel figures and a handful of 1/18th scale two-packs from DC Collectibles. Harley Quinn + Unique look + Injustice: Gods Among Us + 6 inch scale equals a purchase from me. Harley has a few different looks in the game and this one actually isn't her default look. Instead, it's her insurgency look. I'd probably by the other one if they released it, too, especially considering how great this figure is. Ready for a closer look? Then join me after the break... 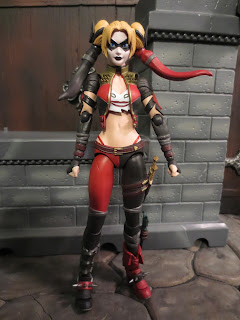 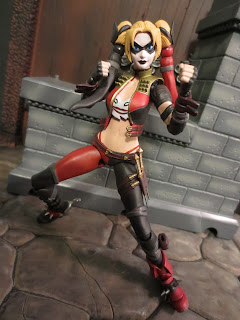 *Harley is extremely well articulated. She's sturdy and loaded with functional, natural feeling joints. The joints are also fairly well hidden and integrate well into the sculpt. The range of motion that her hips, knees, ankles, wrists, elbows, and shoulders have is incredible! You'll be able to find dozens of exciting poses that capture Harley's athletic and mischievous spirit! 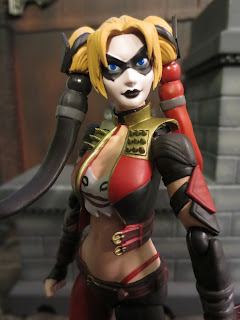 * The sculpt is incredible. I love the mixture of realism and stylization that the sculpt conveys. Harley is absolutely gorgeous and her body is curvy and proportionate. She's wearing layers and the sculpted clothing looks appropriately three dimensional and not just painted on. Little extras like the spiked studs on her lapels, the various bands and pads on her arms, and the details in her hair are perfect. 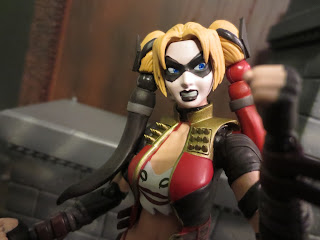 * Articulated hair isn't exactly a new concept but I'm not sure of any other figure I own with this much hair articulation! You really can tweak Harley's pigtails as much as you'd like to make them look natural in a variety of combat stances. I think her hair has more articulation than most new Star Wars and TMNT figures! 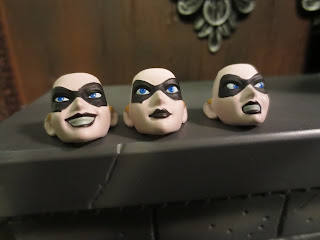 * Extra faces? Extra faces! What a cool idea! Just like the larger and more expensive 1/18th scale figures, Harley comes with some swappable faces that allow you to display Harley in a variety of moods. They're easy to swap and stay on securely. You've got sexy and devious Harley, a more neutral Harley, and fairly pissed off Harley. Pick your poison, puddin'! 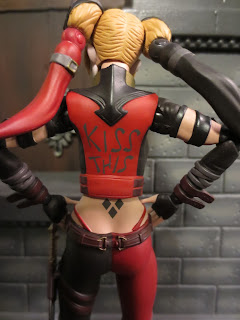 *The paint work is extremely neat and clean. There are plenty of fine details on the figure from the words "Kiss This" emblazoned on the back of Harley's jacket to the Joker-like face on the front of her t-shirt. The paint work is smooth, colorful, and consistent. 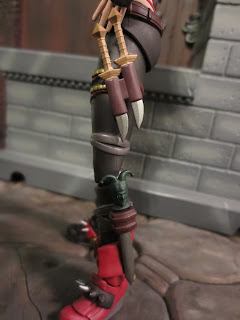 * Harley's outfit also has some incredibly cool (and sharp!) boots as well as a sheathe for a removable dagger on her lower left calve and two permanently attached daggers on her right hip. 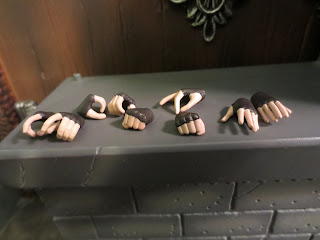 *Harley has 9 swappable hands! They're easy to change out, stay on pretty snugly, and give you some great posing options. She comes with two trigger hands, two standard gripping hands, two fists, two open hands, and a pinching right hand to use with the included Joker card. 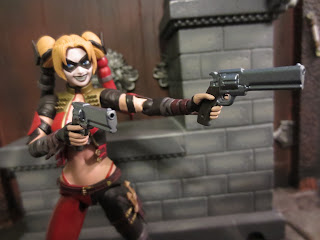 * Harley's two pistols look great, fit in the pistol gripping hands well, and are die-cast metal. Yup, these are actual metal accessories! They're extremely cool and add a lot to the figure! They look incredible with the figure which, of course, looks incredible holding them! 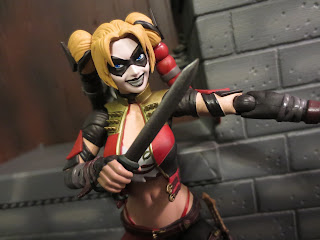 *The removable dagger I mentioned above has a little jester's head sculpted onto the hilt. It's a simple piece but can easily be displayed in Harley's hands or in her sheathe. 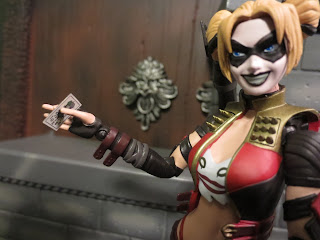 * The included Joker card is just a small playing card. It's fully detailed on both sides, however, and feels like it's made out of a sturdy, glossy cardboard. It's a little accessory so be careful you don't lose it. 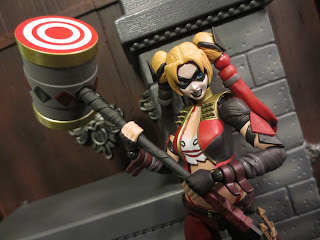 *A giant mallet is one of Harley's signature items and this mallet is incredible! I love the bulls-eye on the head of the mallet and the nice paintwork here. The handle also has sculpted wrappings all down the shaft which helps Harley to get a better grip on it. You can really get some amazing poses with her holding the hammer. 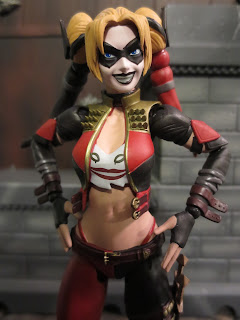 *Guess what? I'm not sure I have any. The only thing i can  think of is that I want to mention the price. These figures are imports and tend to retail for around $50 (Harley tends to sell closer to $55). The cost is definitely high and I think that's a bit of a turn off. Of course, at the same time, there's nothing wrong with this figure or that feels lacking. She comes with extra hands, plenty of accessories, quality paint and sculpting, and the interchangeable heads. I enjoy a number of other 6-7 inch scale lines such as Star Wars Black, Marvel Legends, NECAs offerings, and even DC Collectibles' various Batman offerings, but rarely does a figure from those lines feel complete and definitive. Harley does for me. Unless I'm getting ridiculously crazy with expectations, this is as good of a figure as I could ask for. Is she worth 2 - 2 1/2 times the price of a standard 6-7 inch figure? That's a tough call. 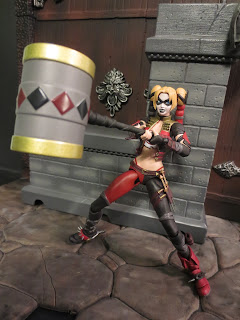 I'm really digging this figure! She's incredible fun and functional while also being very sturdy. While she's definitely more for a collector to display, pose, and photograph, there's plenty of fun to be had. I'm really going to have to start paying more attention to Bandai's S.H. Figuarts line as they seem to do quality work in the scale. Harley is definitely on my list of figures to consider for my best of list at the end of the year (she might be at the very top) and I can't recommend her highly enough. She's a bit smaller than your average DC Collectibles figure but she's also much more functional. I think you can still make her work in pretty much any 6-7 inch Batman display. This one gets an Epic rating from me, no doubt about it.