Toy Review: Sect of Rand from Mordles by ToyFinity 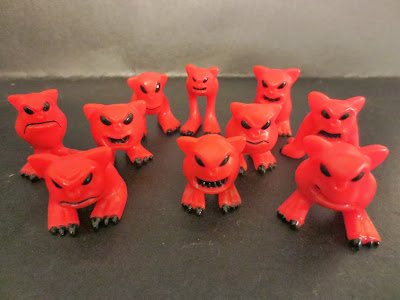 While there are lots of smaller independent toylines available these days which are inspired by classic toys from the 70's, 80's, and 90's, it's rare for one of those lines to be officially owned and branded by a former fan. That's exactly what happened with Mordles, however, the small miniscule fodder for the larger creatures from Ideal's 1985 line Rocks & Bugs & Things. The good folks at ToyFinity actually managed to purchase the rights to these guys and have been cranking out Mordles left and right beginning this summer. Selling for $1 each and $10 for ten packs, the Mordles are some of the coolest little minifigure monsters you're likely to find. They're adorably creepy and go great with plenty of toylines. Today I'm looking at one of the newest color schemes for the line, the red and black "Sect of Rand Edition." I'm also looking at one of the Explorer Mordles that comes free with each order. Ready to take a look at these tiny terrors? Then join me after the break.... 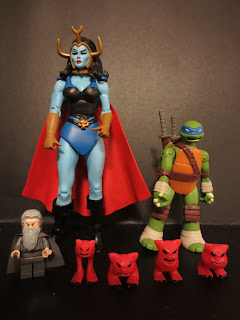 The Mordles are pretty tiny and hover a little above or below the 1 inch mark (some are a bit shorter and some a bit taller). They're made of a soft plastic that gives them a bit of a rubbery feel but seems to be of a very high quality.  They're completely unarticulated minifigures and they came in a clear plastic bag. Since they're little monsters the possibilities are endless as to how you could use them? They could easily fit in as formidible monsters in lines like M.U.S.C.L.E., OMFG, and Mystical Warriors of the Ring or serve as vicious pack animals in 1/18th lines like Star Wars or G.I. Joe. Of course, I'll probably end up using mine as some sort of impish, Tribble like race along with my Masters of the Universe Classics figures. These guys will look awesome swarming all over Castle Grayskull.


There are ten different Mordle sculpts and I'm including a picture and a brief description of each figure. All of them are molded in the same red colored plastic and feature painted black mouths, eyes, and toenails. All of the paintwork is extremely neat and clean and the names sound kind of like heart medication your grandpa might take or 17th century venereal diseases. 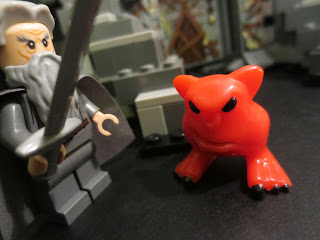 Caborux is a nastly little guy with rounder ears and a scowl on his face. He doesn't look too happy and is actually a bit frightening. That scowl could be him trying to show he's happy, but I doubt it.

PS: That's Caborux on the right. That's Gandalf the Grey on the left. if you don't know that, you're probably on the wrong website. 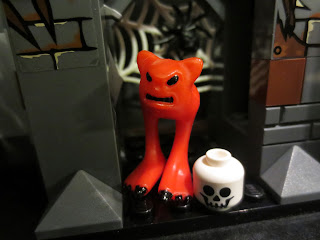 Erixmes is probably the most unique of the Mordles because he has a really small body but really long legs. He's the tallest figure and seems like he'd be quite fast. 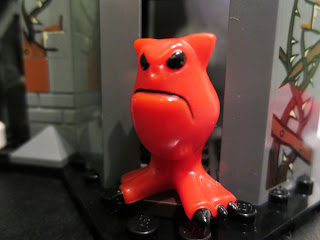 Grvnt is also pretty tall, but has a more standard Mordle body shape. He also looks extremely grumpy with a giant frown on his face. Perhaps he's so upset because he doesn't sport a thigh gap like the rest of the Mordles. Yup, his legs are connected together. It's ok, Grynt. 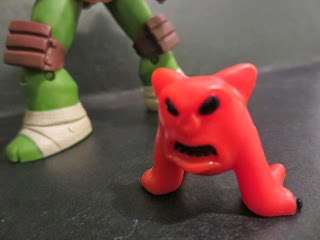 Merlun has some wicked sharp chompers, some very wide eyes, and backwards feet. Yup, he has his toenails and toes on the back of his feet. Very unusual. Probably hard to clip them. Also, does he run backwards? Does he experience time backwards? Did he once end up in Nodnol but think he was in Bulgaria? 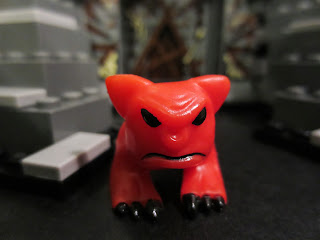 Rellun is a stout little fellow that for some reason reminds me of one of the Ghostbusters Terror Dogs more than the rest of the Mordles. I'd love to see him in sparkly blue or purple plastic. 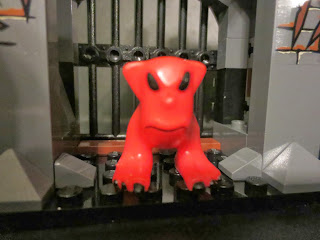 Serikachen is another unusal looking Mordle that stands out from the crow a bit. With medium sized legs and a smaller, thinner body, and some funny ears that seem longer than his Mordle brethren, Serikachen is an unusual fellowthat kind of resembles a Mordle version of Bert from Sesame Street. I'm sure there is a Mordle that looks like Ernie somewhere.... 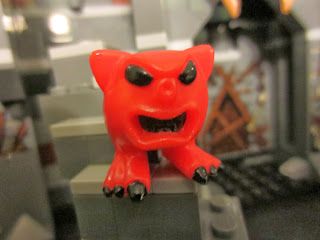 Talmesca has a body shaped like a tomato and is bearing his teeth in an incredibly menacing way. He looks kind of like a pig from the front. A pig made from a tomato. All he needs is a piece of lettuce since he's two thirds of the way to being a BLT. 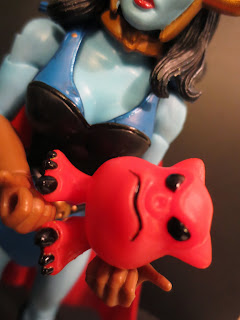 Something about Vlain's shape reminds me of the Moblins from The Legend of Zelda. Maybe it's that thick jawline and the furrowed brow,or the fact that he sometimes gives me rupees and tells me "it's our little secret." 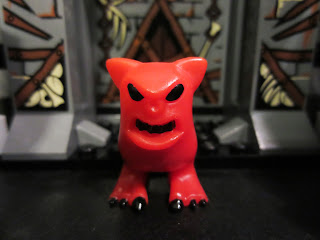 Yorzwurl kind of reminds me of an evil version of the Jelly Belly mascot. Consequently, he also seems like he'd be delicious. Maybe fruit punch or strawberry flavored? 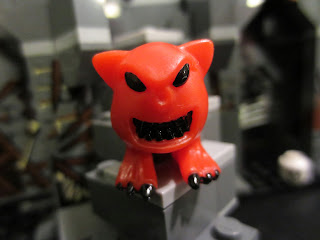 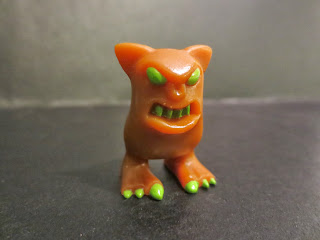 Whenever you make an order from ToyFinity you get to choose a free Explorer Mordle. I chose an Explorer Yorzwurl. Molded in a tannish brown plastic and featuring bright green toenails, eyes, and teeth, I'm really liking this guy. I wonder if he's supposed to be a jungle Mordle? I'd kind of like a set of these guys as well, as brown and neon green are two of my favorite colors. Not usually together, but it works here. 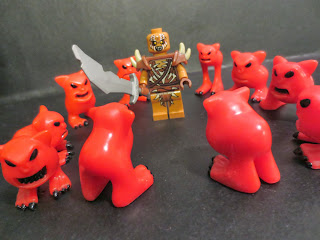 The Mordles are really some great little toys that should be quite fun for kids or collectors who enjoy playing with their toys and displaying them in weird, random places. I could see these guys seamlessly integrating being integrated into a multitude of other toylines as well as being used in board games, role playing games, and other activities where miniscule monsters are welcome. At $10 a set, it's really a pretty nice deal. Typically with independent toys, you have to sort of ignore the price or expect to pay more since you're getting something produced in lesser numbers, but here I think you're getting a very fair deal. ToyFinity has really put out some neat, inexpensive minis and I hope they continue to expand the Mordles brand. I'm definitely giving these guys a Great rating- loads of fun and versatile. Plus, they're the perfect blend of cute and creepy! 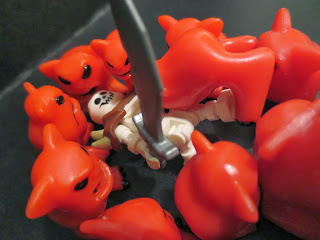