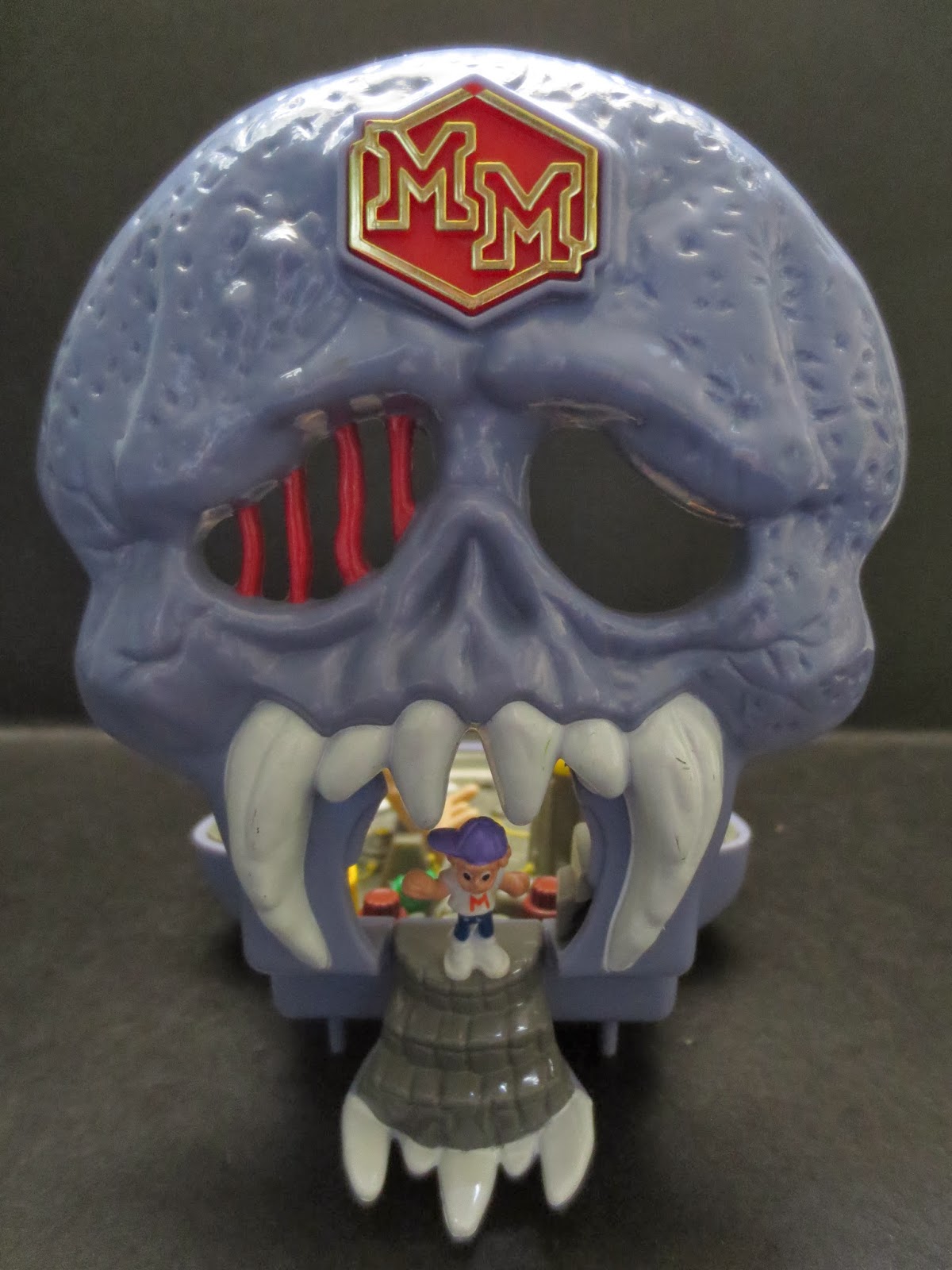 Today for Micro Monday I'm reviewing what very well might be my favorite Mighty Max set ever: Mighty Max Escapes from Skull Dungeon. Everything about this set except for Dr. Gore (my original broke) is original to my childhood. I've always loved this set for a multitude of reasons: the exterior of the case actually ties into the play area of the set, the inside is loaded with fun play features, and it has a great creepy mad scientist/ Frankenstein's monster vibe going on. Despite some of the larger and more impressive sets that came later on in the line, I've always held that this Doom Zone was the quite possibly the pinnacle of Mighty Max design. My friend and Mighty Max collecting colleague John Gaither recently covered this set over at The Clawful Punch but I love it so much that I wanted to cover it as well. This wasn't my first Mighty Max Doom Zone, but it may have been my second (it was either this or Palace of Poison). Some collectors have claimed a similarity to this and Castle Grayskull but I just don't see it beyond both things simply being giant skull. Ready for a trip inside the Skull Dungeon? Then join me after the break.... 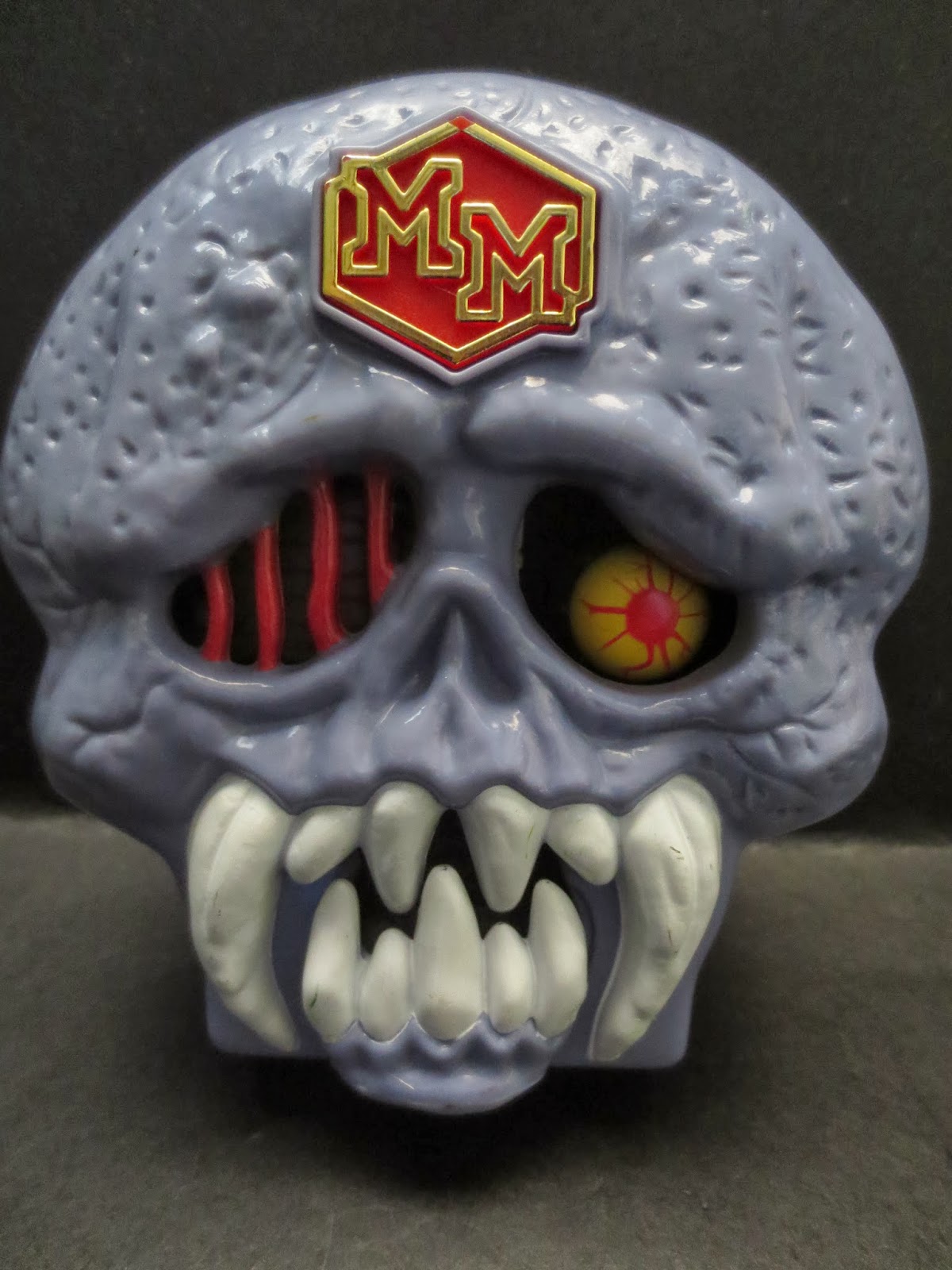 Mighty Max Escapes from Skull Dungeon was part of the first series of Doom Zones released in 1992 and is around 4 inches long and 3 1/2 inches wide when closed. I love the look of this set as it definitely has the feeling of a swords and sorcery styled castle. OK, so maybe the long, curved teeth do remind me a bit of Castle Grayskull. The skull is molded in a grayish-blue plastic and has lots of little dents and cracks all over it as well as red bars where the right eye should be. The left eye is visible through the socket; it's nice and yellow with creepy red veins. But like The Mighty Boosh taught us, it's what's inside that counts so we'll open this bad boy up. 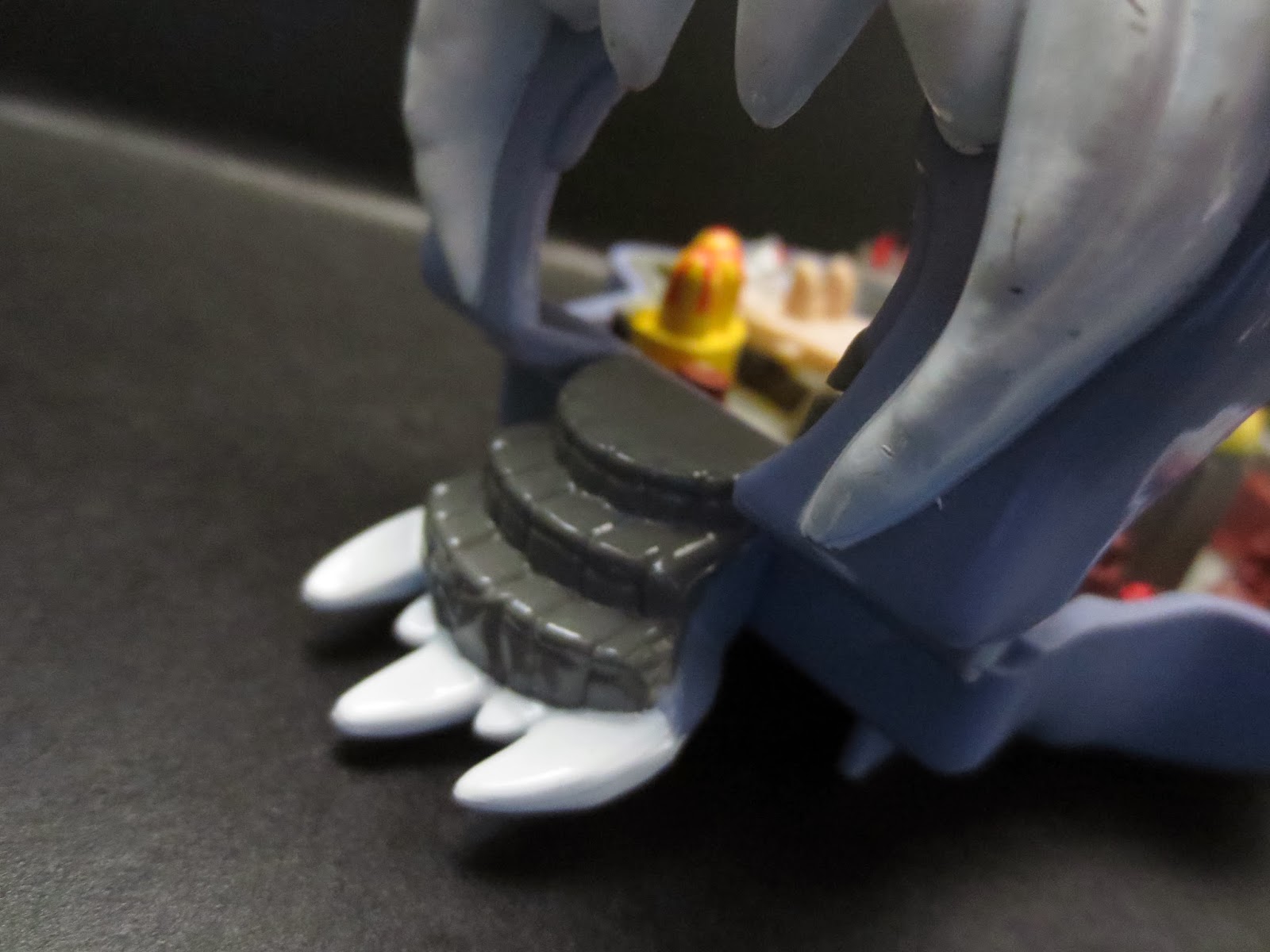 The set stands up vertically like the majority of the Doom Zones and Horror Heads. One of the coolest things about it is that, unlike most other sets, the exterior fits logically into the play area of the set. While the main play area is the interior of Skull Dungeon, the exterior looks not like an organic creature but like a fortress made of stone. The jaw is hinged and drops down to create a staircase into the main set. This is easily one of my favorite things about this set. If you're really bored and have no friends, you can also pretend that the skull is talking to you. 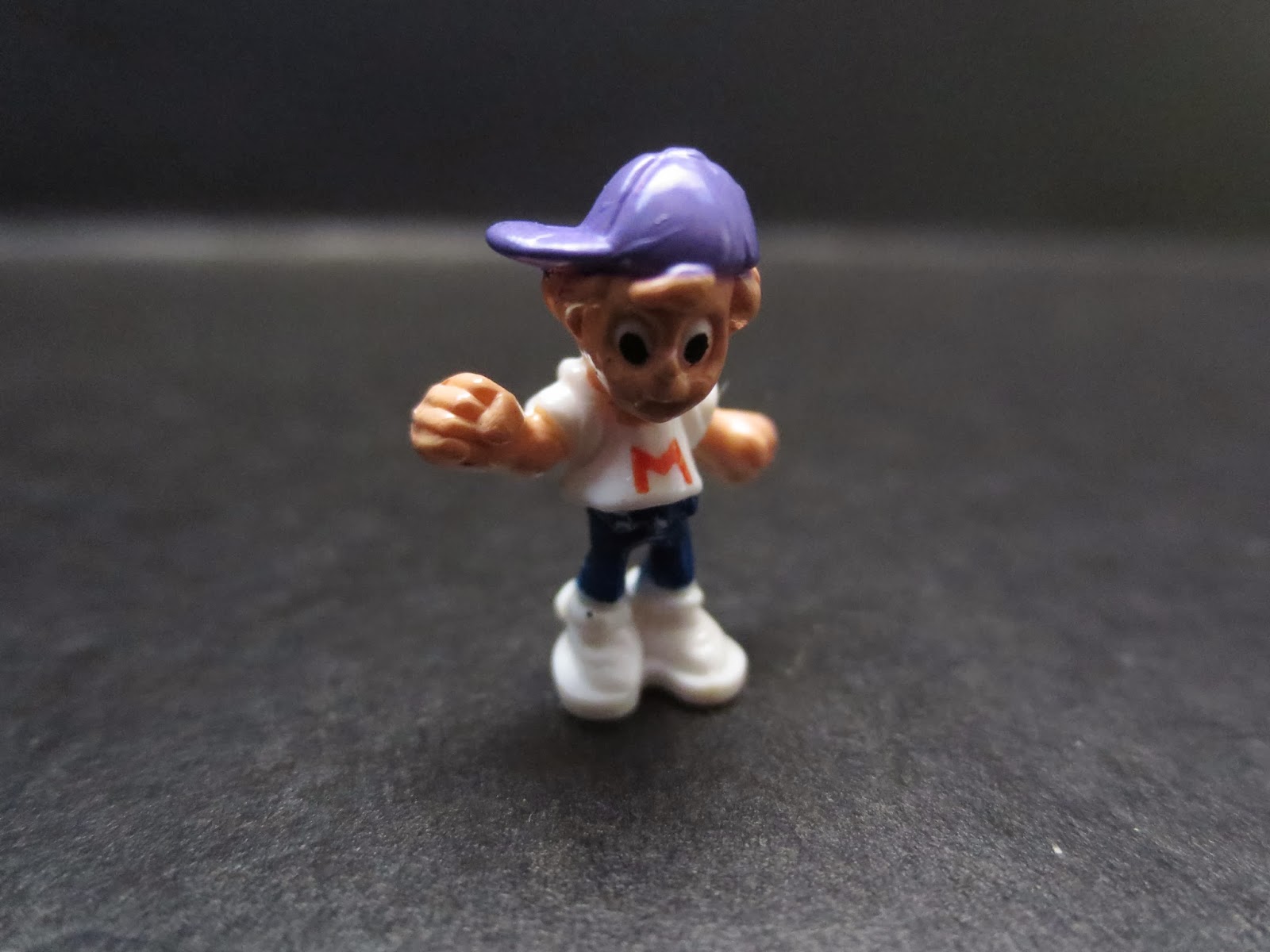 The set comes with three microfigures, the first of which is Max. Since the figures were randomly inserted you could find any of the eight younger Max sculpts with this set. I've got the purple hatted Max who I've always referred to as the dancing Max because it looks like he's trying to dance. I would almost guarantee that is not what he is supposed to be doing, but it might make for an interesting play dynamic. Who is the better dancer: Mighty Max or Dr. Gore? 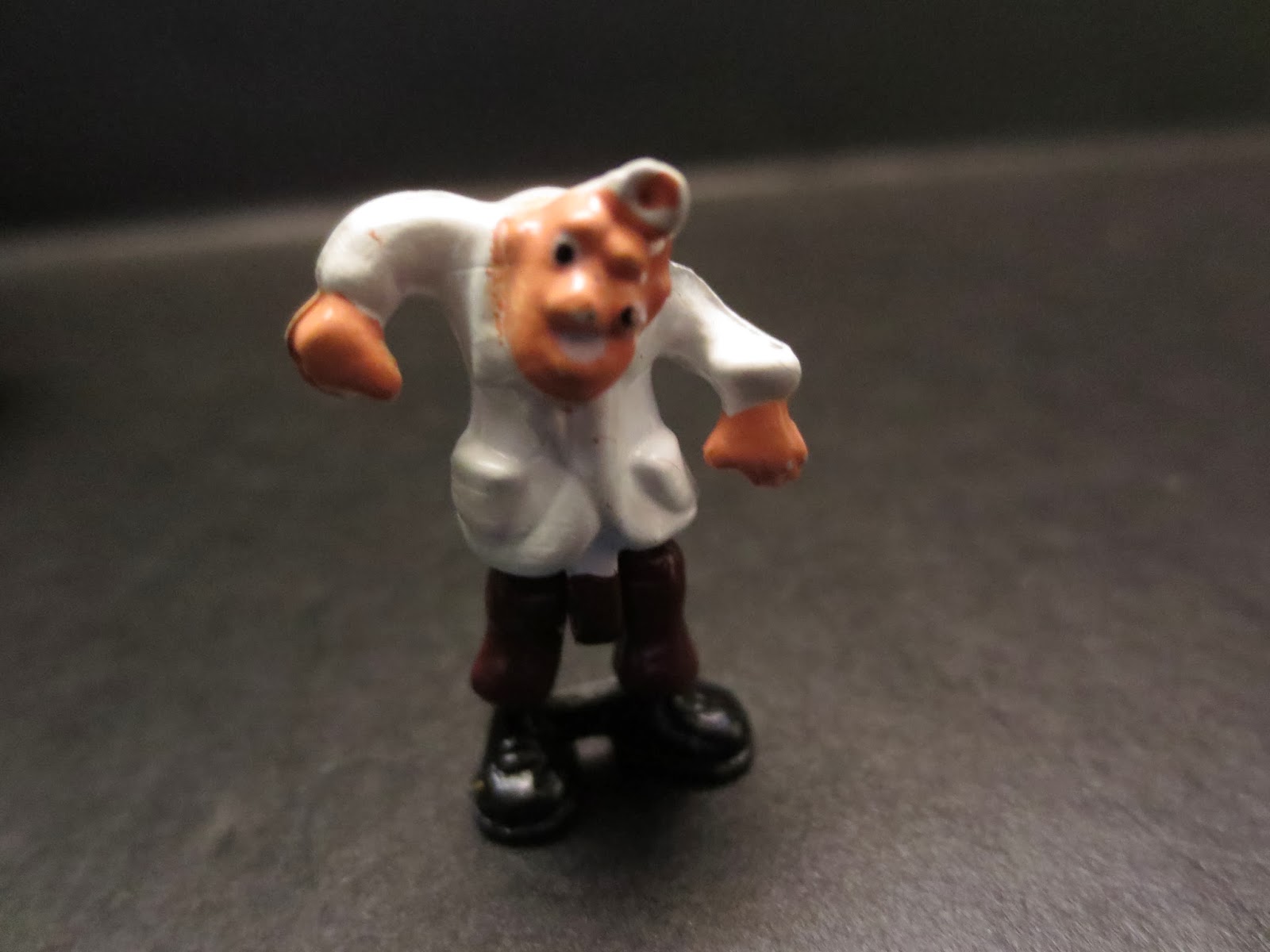 Here's Dr Gore! He looks to be a blend of a traditional mad scientist mixed with the hunchbacked Igor archetype. He's got a really funky pose (perhaps the Charleston?) and is hinged at his hips so you can stand him up or sit hm down. If you look at the face, you might see that he kind of resembles Sloth from The Goonies. Ready for a figure who is guarantee to know how to do the Monster Mash? This is the Smasher. Yes, that is his name and Smashing is his game. He is also hinged at the hips and is a really fantastic Microfigure. Probably one of the best as it is very clear as to what he is supposed to be. 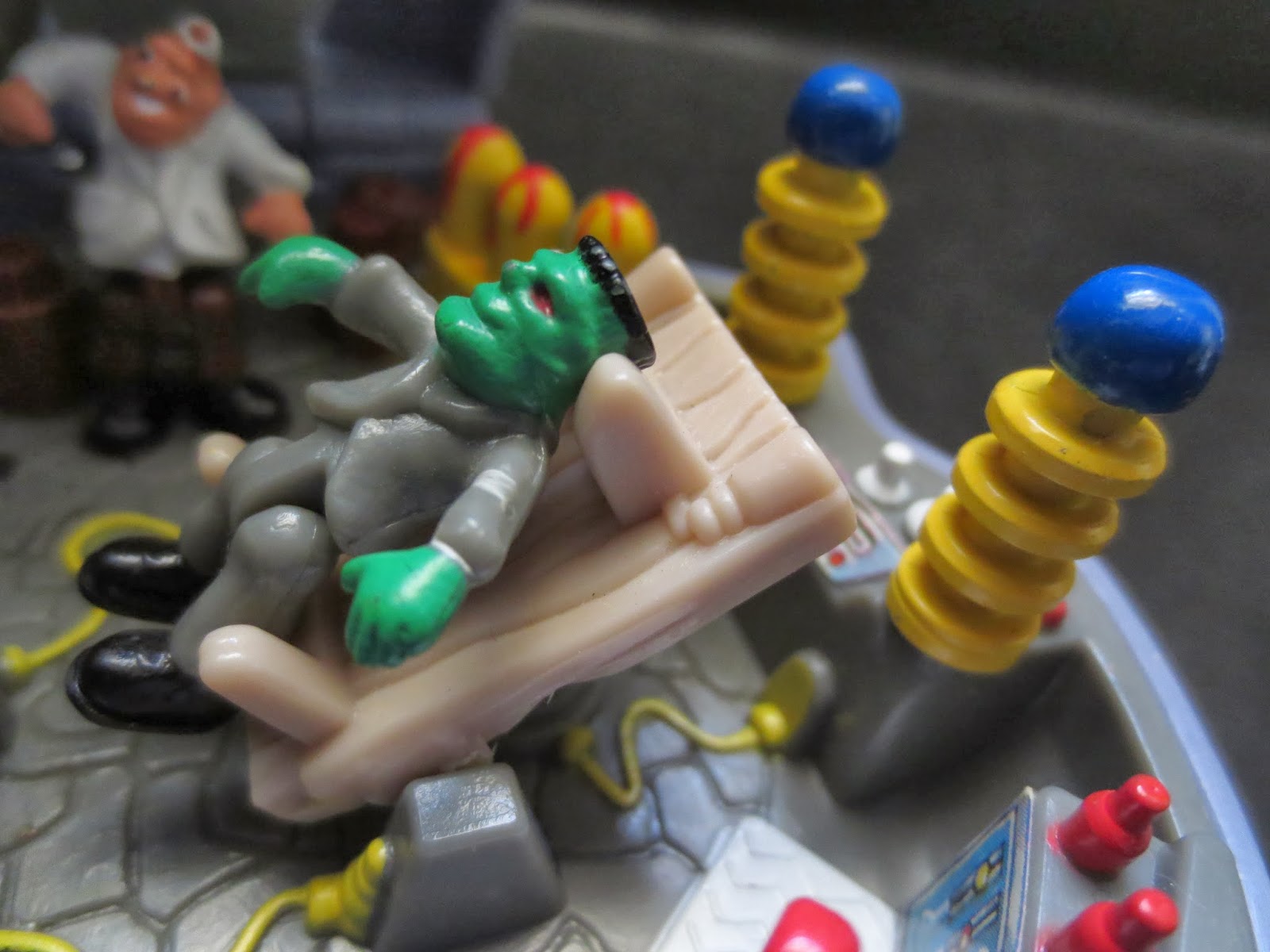 Inside the playset you will find an incredibly detailed interior that does a great job of representing a mad scientist's laboratory. The floors are made of uneven cobblestones and the walls are lined with cabinets, barrels, and table covered with bakers and tools. The highlight of the ground floor is the operating table that holds the Smasher; the figure can be placed on the table and the table itself can be elevated. There's a cool movable switch that be adjusted and two giant electrodes used to power Dr. Gore's experiments. Small details like little wires and detailed instrument panels definitely make this one of the most impressive Doom Zones ever. 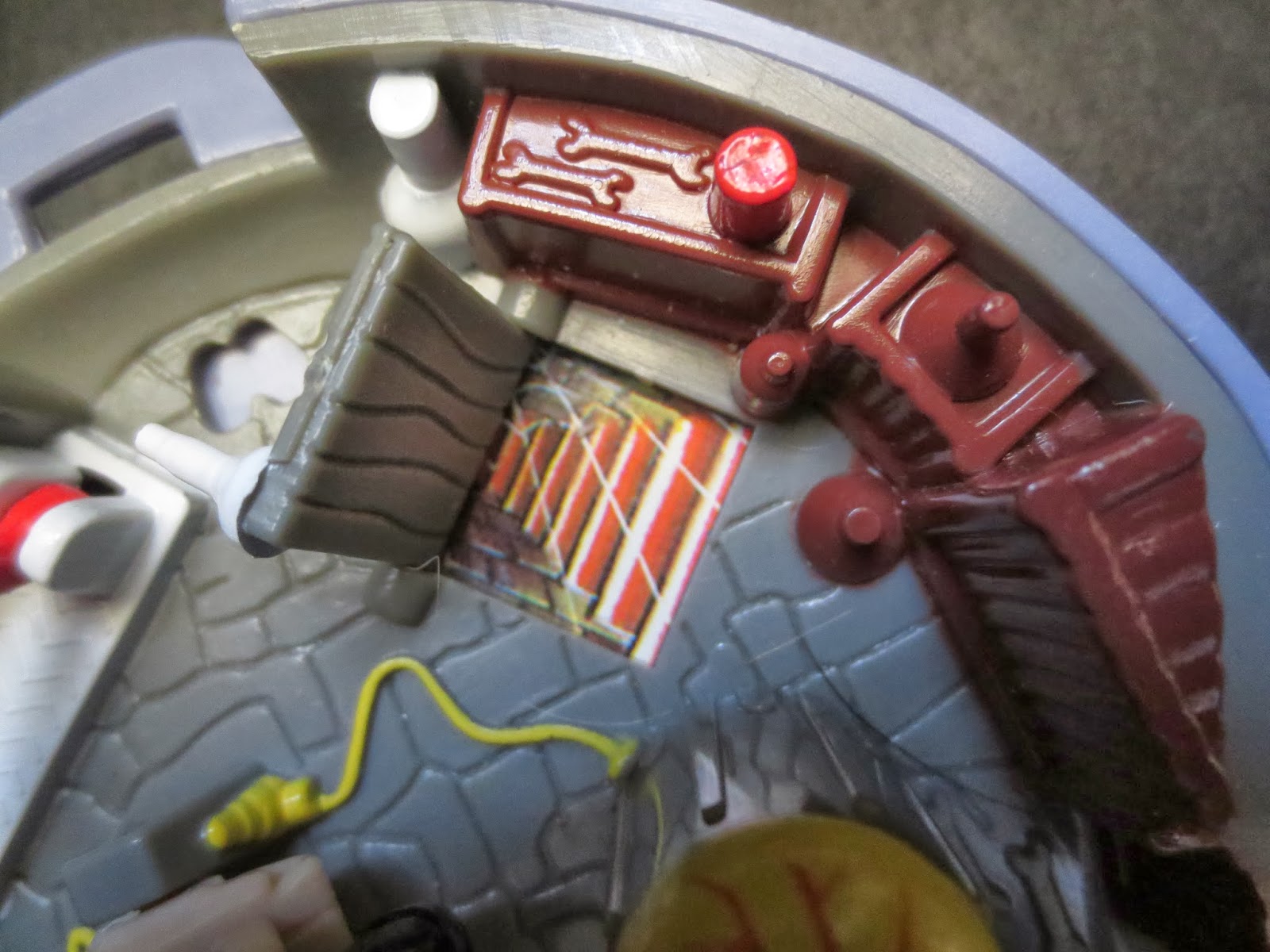 There is another cool feature on the bottom floor hidden behind the giant eyeball/electrode. A panel of the floor can be lifted up to reveal a small staircase. It's just a sticker, but it's a great, foreboding detail. 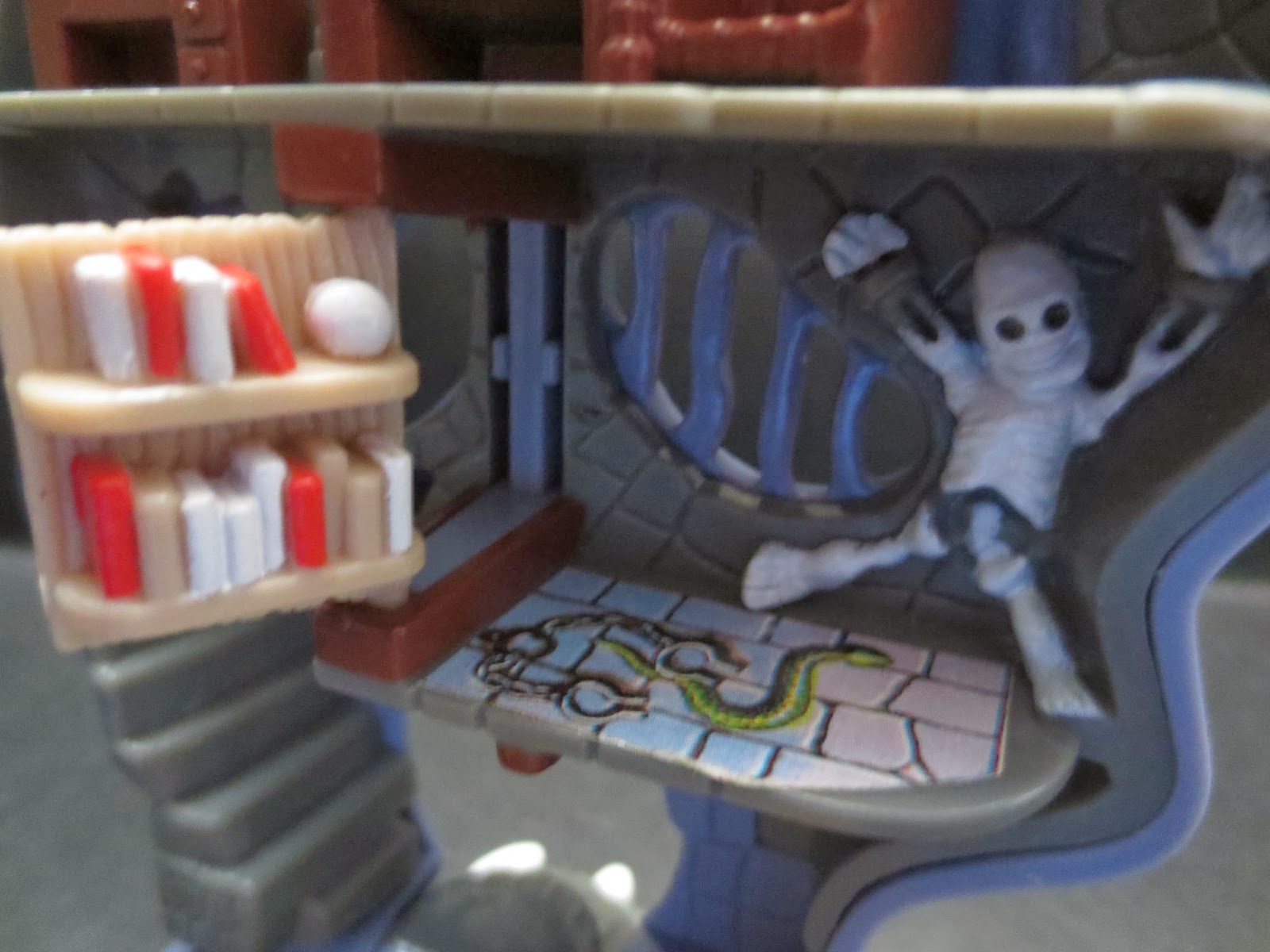 The vertical wall of the playset has a small staircase that leads up to a little terrace with a shelf filled with various arcane textbooks and a crystal ball. Give it a little push, however, and the shelf spins to reveal an entrance into the dungeon. There's a sticker on the floor of some shackles and a snake. There's also a large skeleton left to rot in the corner. I've always loved secret passages and this is one of the coolest! 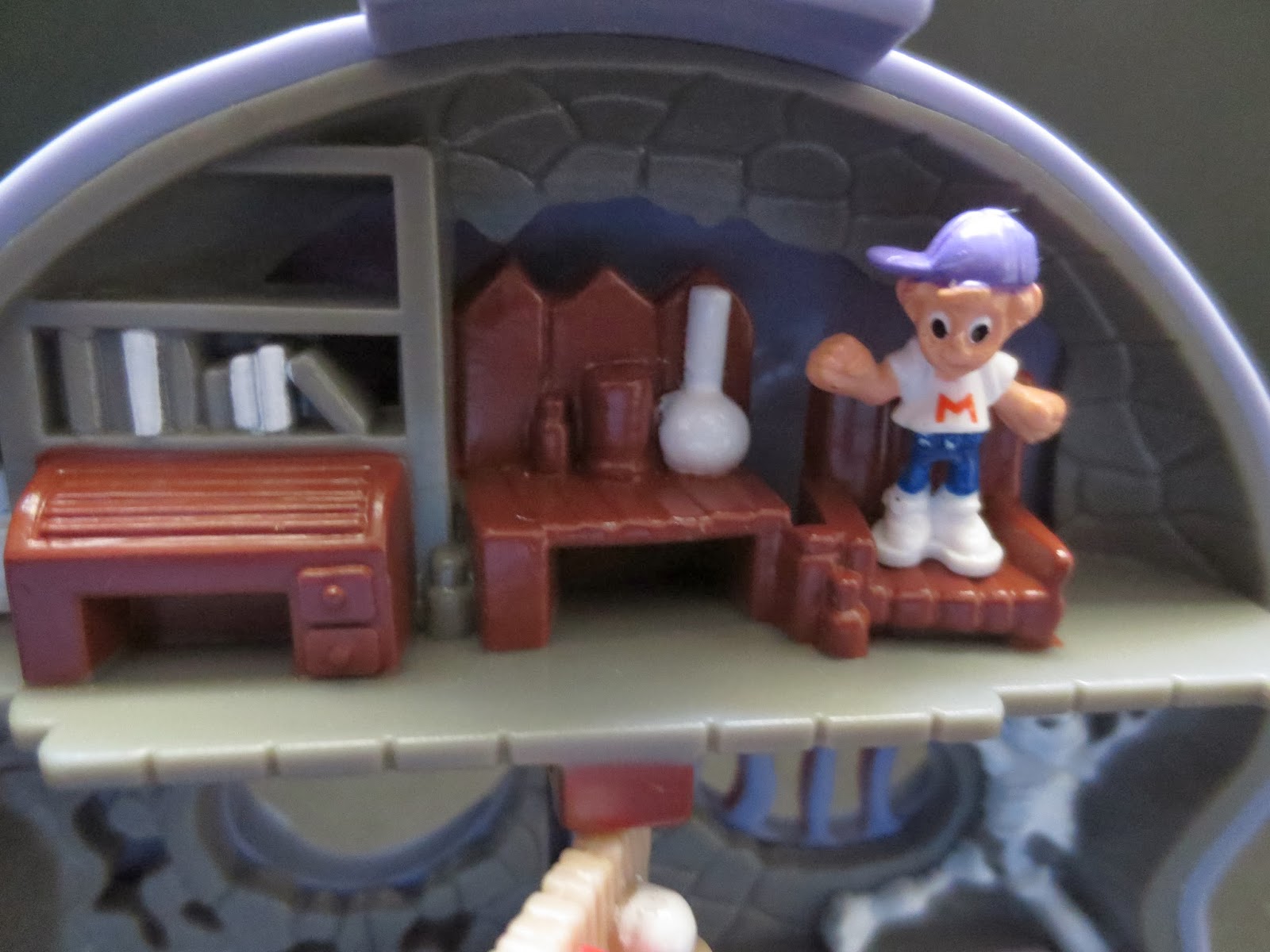 The top floor has a little library with a big comfy chair, a bookshelf, a desk, and a work table. It's nothing special, but it is well detailed and capable of holding any of the microfigures in the set. The set closes pretty easily for storage. Just place Max in his footprint, Dr. Gore in his footprint, the Smasher on the table, and move the electrodes from above the table down to their holes in the floor. Bend Dr. Gore over and close the set! Wah-lah! You're ready to sneak this set into study hall! 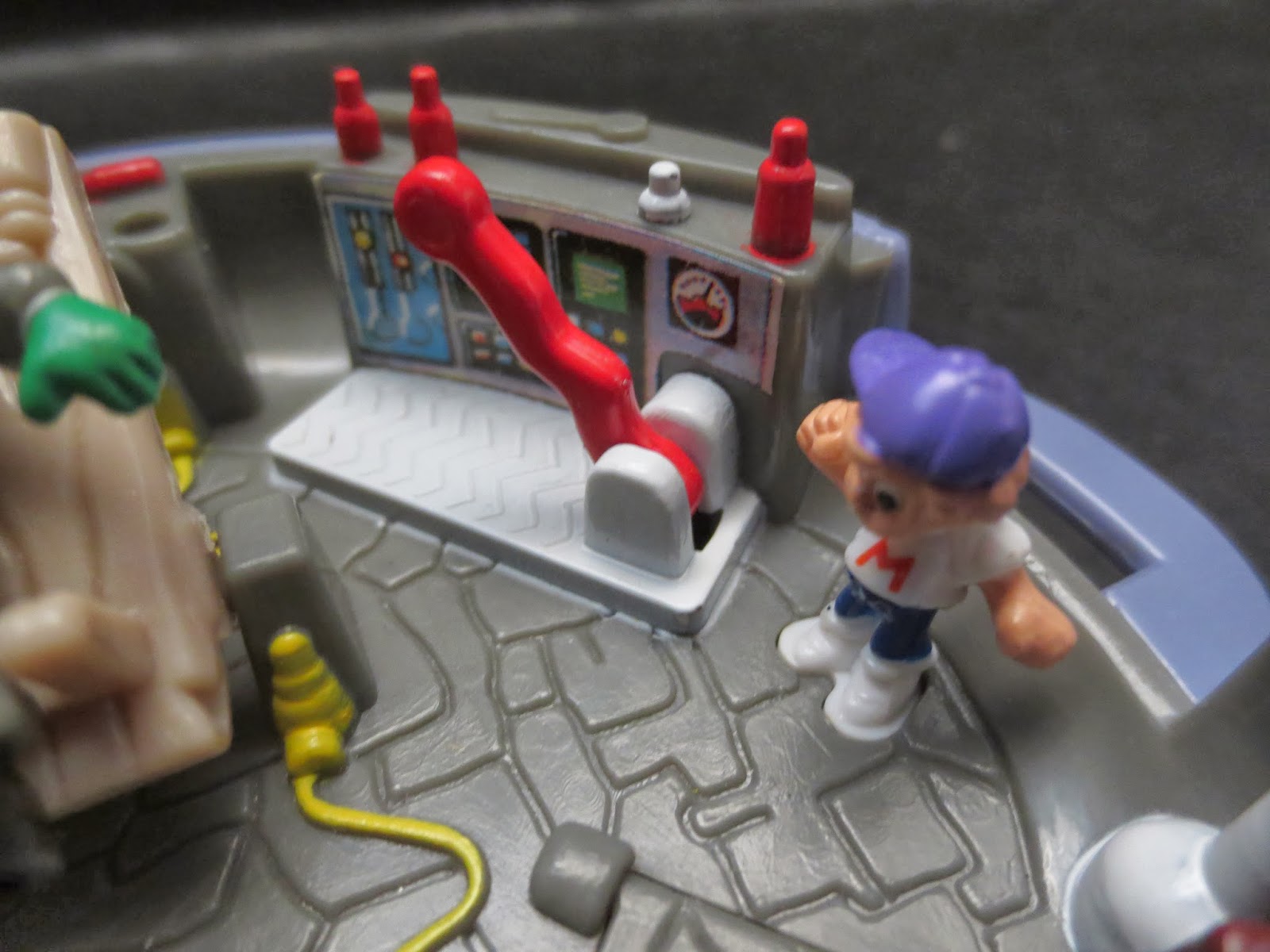 I really do love this set. It's always been one of my favorites so that certainly colors my review. Trying to look at this set objectively and compare it to other Mighty Max sets, though, I really do think it's one of the best offerings in the line. Lots of great sculpting and detail, an exterior shell that ties in to the playset, a few fun play features, two villains that feature some articulation, and a good number of both painted details and well designed stickers all combine to make for what I would call a confirmed Epic toy. This set cemented my love for Mighty Max back in the day. It's just so much fun and truly is the best representation of the idea of each Mighty Max set being a unique horror, adventure, or sci-fi film story told through a playset. If you're only picking up one set to help make up your mind on Mighty Max, I'd encourage you to make it this one. You won't be disappointed.
Posted by Barbecue17 at 11/23/2014