Action Figure Review: Clawful #1018 from POP! Television: Masters of the Universe by Funko 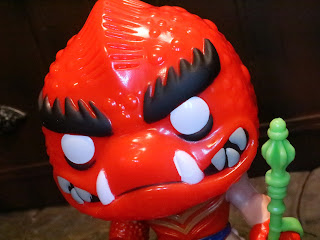 How about we check out Clawful today? Let's do it! Clawful certainly isn't one of those characters who pops up in MOTU merchandising all of the time but he definitely gets around more than some of the more obscure characters from later in the line. Originally appearing in the 1984 action figure series (though he showed up on the Filmation cartoon in 1983), Clawful has had a long time to endear himself to MOTU fans. Clawful was one of Funko's SDCC 2020 exclusive POP! vinyls that was orignally sold through Funko online, then Toy Tokyo. I missed out on him both times and ended up getting him through a fellow collector who picked him up for me in the UK from a Tesco. That's pretty cool! Thanks again, Brian! Let's take a look at Clawful after the break... 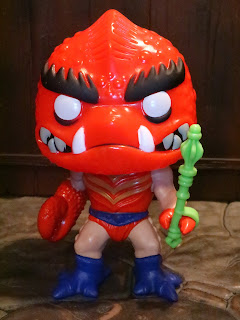 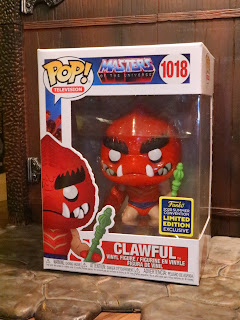 * Clawful comes in the same box that the newer MOTU POP! vinyls use which is decorated with the red and blue explosion background used on the vintage toy cards and the new Masters of the Universe Origins line. (The earlier released used the Grayskull stone print introduced in the Masters of the Universe Classics line). There is a variation on the packaging as some Clawfuls have the "Toy Tokyo San Diego 2020 Limited Edition" while others have the "Funko 2020 Summer Convention Limited Edition Exclusive." 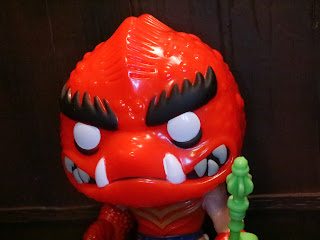 The Positives:
* Clawful looks like Clawful alright. I really like seeing POP! versions of "nonhuman" characters as the designs are usually a bit more interesting. Clawful has a bright, shiny look, white eyes, and those giant Muppet-like eyebrows that he's known for. It's a pretty good version of Clawful, really. 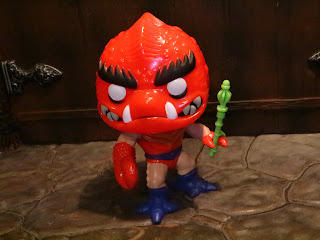 * Funko did a great job of capturing the vintage toy version of Clawful in POP! form. He's got all of the details and paint apps from the toy and he just looks fantastic. This guy really is very eye catching. Of course, he's also got the swivel head like most other POP! vinyls. 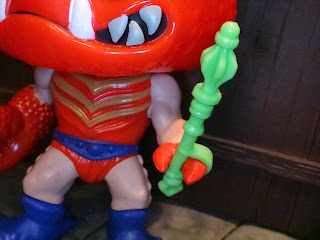 * Funko has been a bit spotty on giving the MOTU POP! vinyls their vintage weapons but they definitely did with Clawful. He is menacingly wielding his vintage toy club and it looks fantastic. I love how he's holding it in his clawed hand! 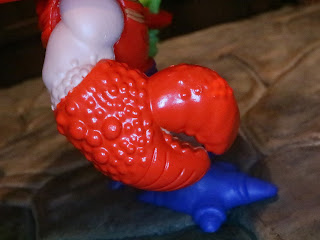 * Clawful's distinctive right claw is also lovingly rendere here. I love the weird little details on it! Too bad it doesn't actually pinch! 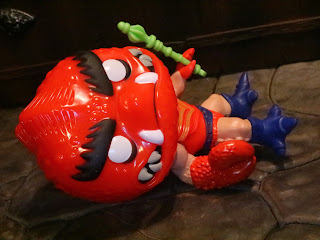 * My Clawful seems to be a bit "back heavy" and sometimes he wants to tip over. It might take you a few tries to balance him properly. 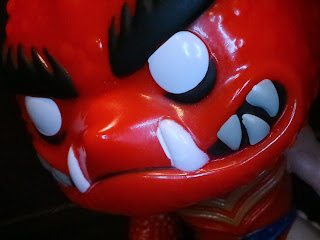 * Overall Clawful's paintwork is pretty neat but there is definitely a bit of white slop on his fangs. 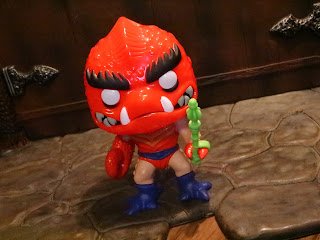 I do like Clawful but considering he's an overpiced con exclusive who tends to tip over, he's not one of the best figures released this year. If you want him now, odds are youre going to be overpaying for him, and he's just not worth it. He's an Eh and a 1/2 POP! in my book. Hardcore Clawful fans are going to want him but your average MOTU fan and/ or POP! collector could easily skip him. There are better MOTU POP! vinyls out there, most of which are easier to find and cheaper to obtain. Sometimes little detriments add up and Clawful definitely feels like his detrminets add up to hurt him severely.
Are you a fan of Clawful? Then get a big side of melted butter and check out my reviews of the M.U.S.C.L.E. Clawful from Series 3, Pack A and the MOTUC Heads of Eternia pack that features a Clawful head.
For more POP! Television reviews check out the following: