What's up everyone? We're less than a week away from October already! While the first half of the year seemed to go oh so slow the last month or two has just flown by! Halloween 2020 is going to be different for sure but I have hope that it's going to be great as well. One of the awesome things worth celebrating is this immensely cool new "Barbecue's Bonfire" banner that Matt from The Toy Box made for me. Isn't this amazing? This is what I really look like, by the way. That's actually a photograph of me outside my house and not Matt working his digital art magic or anything. I love it! So what else is new this week? 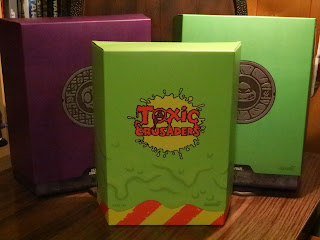 Recently I had a big box of goodness show up from Big Bad Toy store and it was filled with Super7 Ultimates! I got the entire first series of the Teenage Mutant Ninja Turtles Ultimates (Raphael, Foot Soldier, Baxter Stockman, and Splinter) as well as the Ultimates Toxie from Toxic Crusaders. It took BBTS a long time to get their Toxies in but they seemed to show up at the same time as the TMNT Ultimates, so all is well. I heard we're getting Usagi Yojimbo, too, though he might be marketed under his own name and not the TMNT banner. 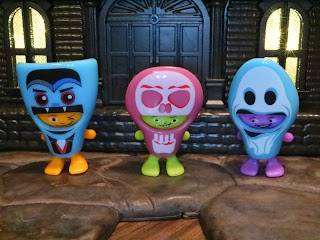 Check out these cool new Kinder Joy Masked Monsters! They're simple little plastic minifigures that feature "mix & match" Halloween masks. The masks also glow in the dark, too. There are eight different characters including the Vampire, Skeleton, and Ghost seen here, as well as a Witch, Frankenstein, Werewolf, Devil, and Jack O' Lantern. I really want that Jack O' Lantern! I got a 4-pack but it had two ghosts, so my daughter got one to add to her collection. 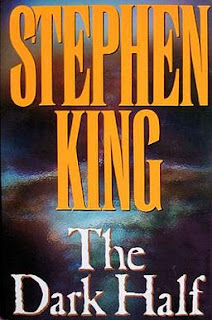 Have I been reading? You bet! Just yesterday I finished Stephen King's 1989 novel The Dark Half, a creepy tale about an author with a very dangerous pseudonym. This is another King book that I was not at all familiar with (I've never seen the George Romero directed film, which I now need to rectify) and it's always fun going into King's books with little knowledge of what is about to transpire. This is a good one, especially if you're fascinated by the creative writing process and how someone normal can come up with twisted, terrifying visions. If you're familiar with King and his infamous pseudonym, Richard Bachman, you'll get even more out of this one. I'd compare this one to the Dead Zone or Firestarter as while it's still a supernatural story it's not necessarily scary. It's also the first book with Sheriff Alan Pangborn in it. This one is quite good and while it's not one of King's most well known stories, it's very accessible and worth a read if you're a fan. 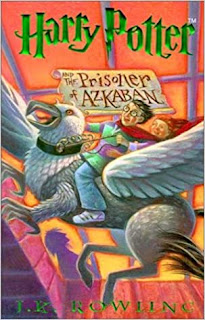 My daughter and I started reading the Harry Potter series back in August and this past week we finished Harry Potter and the Prisoner of Azkaban. I really love the Harry Potter series although I'm not a super fan or anything. I'd read them each once prior to rereading them with my daughter and this one has always been my favorite as it's just such a fantastic "mystery" story with so many moving pieces of the series just falling into place. While you shouldn't just jump into this series with a random book (you really have to read them in order) this one is definitely the book where you'll know if the series is for you or not. It's really a stellar read. I read the Sorcerer's Stone my senior year of high school in my college English class back in Fall of 2001 and I started Chamber of Secrets during my Freshman year of college back in 2002. I didn't finish it right away but ended up getting bored over the summer of 2003 and gave it another go. I finished it then picked this one up and after that I was hooked. I usually put my initials in my books with the date I finish so it was cool to add me and my daughter's initials and the date to my initials and date from July of 2003. 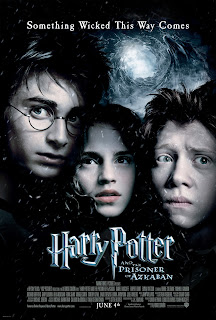 We've been letting my daughter watch the corresponding movie after we finish each book. I don't know how far we'll make it right now, as the books and movies get darker, but so far we're doing well. She was a bit apprehensive about the Dementors but when we watched the movie (during the daytime for the first watch) all was well! She's 7 right now so I think we'll stop after Goblet of Fire for the time being.

Anyways, I actually haven't seen all of the movies before (I'm not sure I ever saw Half Blood Prince or Deathly Hallows part 1) but I remember being disappointed when seeing Prisoner of Azkaban back when it came out. I like Alphonso Cuarón's direction, particularly the atmosphere and how he shows the passage of time at Hogwarts (a key theme in the book) but the story just feels slimmed down. I know book to movie adaptations often lose something in translation but Prisoner of Azkaban really suffers story wise, which is a shame; it has a fantastic cast and some excellent scenes. 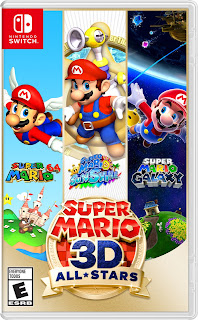 My wife preordered Super Mario 3D All-Stars for my birthday and it arrived last Friday afternoon. It's pretty cool being able to play Super Mario 64, Super Mario Sunshine, and Super Mario Galaxy on the Switch. These are really straight ports, just a bit crisper looking, so you're not getting anything "new." My daughter is a Nintendo fiend, though, and it's been fun showing her these. We've only just started Galaxy together which I think she's really going to enjoy (she did beat Super Mario Odyssey mostly on her own). I've been playing Mario 64 the most as I want to play through them in order on my own. The game was groundbreaking (I originally played it in Fall of 97) but, man, is it clunky. The controls and camera are both truly relics of a bygone era. It's still a lot of fun, though, but it's best played with nostalgia glasses on.

How about the list of the most popular articles for this week? I'm always fascinated to see what articles get the most hits and end up on the list of "Our Most Popular Dishes." at Action Figure Barbecue. This week we've got quite a few new additions but are starting with a rising star:

Cobra Trooper from Hasbro's G.I. Joe Classified Series is on here for his third week.  This is one of the Target exclusive Special Missions: Cobra Island figures and, wow, are these things a pain to find. It sounds like they're supposed to be part of an upcoming series as well, so I wonder how Hasbro will differentiate them? I did order my HasCon Cobra Commander yesterday, though, and had no trouble.

The Child from Star Wars: The Black Series by Hasbro is on his second week on the list and the power and adorableness of Baby Yoda just keeps on keeping on. With the hype for The Mandalorian Season 2  I think we're in for a lot of Baby Yoda in the months to come.

Doggo from Fortnite Legendary Series by Jazwares also enters his second week on the chart. Doggo isn't one of my favorite figures in the line although I do love his facial expressions. I'm not a Fortnite player but Jazwares' Legendary Series is a fantastic toyline and I'm always glad to see it get some attention. Jazwares really seems like they have the potential to be a major player in the action figure aisle, so good for them.

Horde Zombie He-Man from Masters of the Universe Eternia Minis by Mattel is a newcomer. He's the "chase" variant for the series 1 figures and is a really cool minifigure. Translucent green minis are just super cool! If you need one for your set hit me up. I might be able to help.

Buzz-Off from Masters of the Universe Eternia Minis by Mattel is another newcomer and another MOTU mini for the list. Buzz-Off is a great minifigure of a character we don't see as frequently in MOTU toys so he's got that going for him. I'm going to be trying to finish up my reviews of series 1 this week and dive into series 2, so stay tuned!

Barbecue's Bonfire 9/18/2020: Scareglow Birthday Cake Edition: This one is popular! Do y'all love Scareglow that much that you just like to stare at cakes bearing his likeness? Is it because I covered American Ninja 2: The Confrontation? I must know!!!

Have a fantastic week! We're almost to October but take time to enjoy today, too! Stay safe my friends!