Toy Review: Skeletor from POP! Tees: Masters of the Universe by Funko 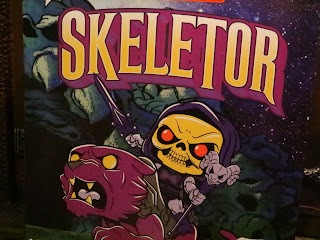 The week before last I reviewed the POP! Tees He-Man set from Funko and now I'm getting ready to check out the Skeletor set. As I said in my review of the He-Man set these are Walmart exclusives (like nearly everything MOTU these days, it seems) and they're usually found in the electronics sections with the other Funko POP! items, typically in the larger Walmart stores that have a collectibles section with figures from NECA, Bandai, and McFarlane. At the Walmart where I found mine the POP! Tees were actually locked up in an electronics cabinet while at another store I saw them covered with the "spider wrap" anti-theft devices. Inside each box is a T-shirt and an exclusive glow-in-the-dark POP! vinyl, which comes in its own separate packaging. The Skeletor POP! inside is a repaint of Battle Armor Skeletor #563 and his packaging has the "Only at Walmart" sticker and a "Glows in the Dark" sticker on the plastic window. These sets have been a real pain to find and I'm not sure I've seen any since I found my set back in early August. Are you seeing these anywhere? The Skeletor is definitely my favorite of the two sets, so let's jump in and check this one out after the break... 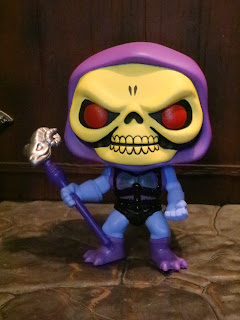 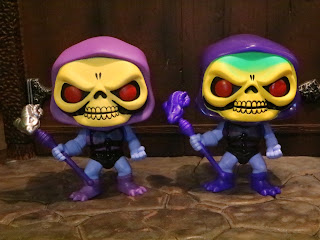 Comparison:
* On the left is the Glow-in-the-dark Skeletor from this set, now labeled as POP! Television #1000 while the previous Battle Armor Skeletor #563 is on the right. These look to be the same body sculpt but the heads do seem slightly different. It might just be the paint but I really think think there are some subtle differences on the hood and brow. The Skeletor #1000 also has lighter colors and, of course, glow-in-the-dark paint on the face. 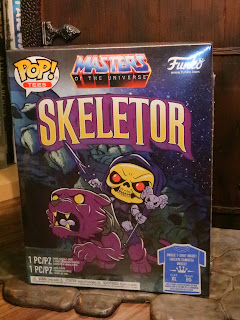 Packaging:
* Here's a quick shot of the box so you know what you're looking for. The box kind of reminds me of a cereal box (it's shaped a bit differently) with colorful, splashy logos and the illustration of Skeletor atop Panthor that is on the t-shirt. Isn't Panthor just adorable? 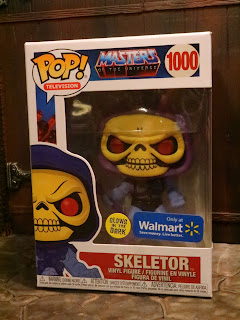 * And here's a shot of the Skeletor POP!. While it comes in the larger box, bundled with the t-shirt, it's pretty cool that it comes in its own box, too. It's interesting that he's numbered #1000 instead of #563 like the previous versions of this sculpt. 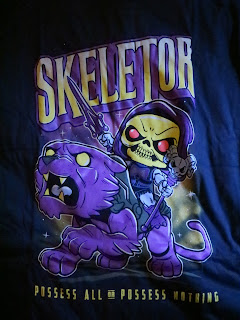 The Positives:
*  While my guess is that most people buying these want the POP! vinyl, it's clear that Funko sees the t-shirt as the main selling point of the set. It's a pretty cool t-shirt. The shirt itself is a very dark blue and, of course, Skeletor is emblazoned across the front. I love the POP! Panthor! I assume we'll see him at some point in the future. Even cool is the text "Possess All or Possess Nothing" which is from one of Skeletor's most memorable lines from the 1987 film. I believe the shirt comes in both Large and X-Large though the ones I found were only in X-Large. It's probably going to be a bit big on me but maybe it'll shrink some in the wash. 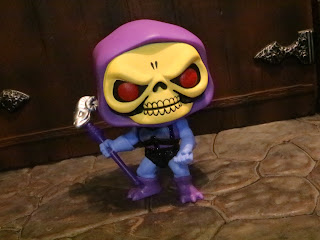 * While the packaging just calls this Skeletor, this is actually Battle Armor Skeletor. I've never actually reviewed this sculpt before so let's take a look. Skeletor has brighter colors than the earlier release (there was a standard release and a metallic release of this same sculpt). I'd say he looks more Filmation-like, even though Skeletor never wore the Battle Armor in the cartoon. Like nearly all POP! vinyls, he's got a swivel head. He's also in a cool pose with a clenched fist jutted out as if he's pontificating about how much he hates that horrible He-Man! 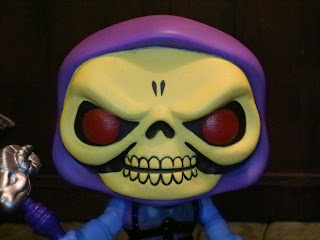 * The headsculpt is excellent. Looking closely I do think it's the same sculpt as the previous Battle Armor Skeletor but the paintwork is so different. I love how neat and clean the dark lines on his face and his teeth are. They look really sharp! The red eyes are an excellent touch, too, as they're quite menacing. The yellow paint is glow-in-the-dark paint but it matches perfectly with everything else. 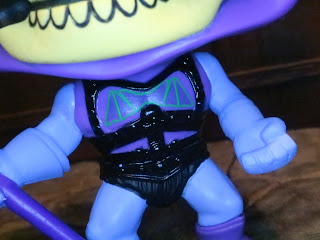 * Skeletor's Battle Armor is quite detailed and it shows off the bat wing design in the middle of his chest plate. No damage here yet! 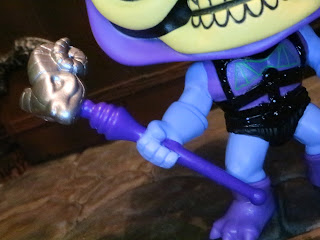 * Skeletor's packing his Havoc Staff! It also has been given a more Filmation inspired paintjob with the ram's head on top being silver rather than the whole staff being purple. 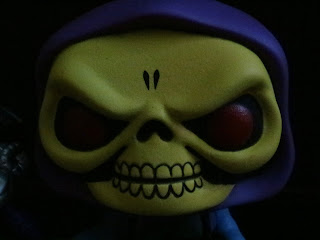 * It's not the strongest glow but Skeletor's face does have an eerie glow about it once you've charged it up a bit. It does look pretty cool and makes this tiny POP! far more terrifying than you'd expect! 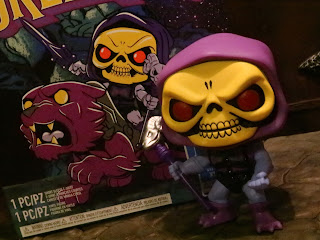 I actually like this set quite a bit more than the He-Man POP! Tees set. The Skeletor t-shirt may only be a bit cooler than the He-Man shirt but the Skeletor POP! vinyl is way nicer than He-Man. Skeletor looks fantastic here with brighter colors, an excellent headsculpt with fantastic paintwork, and a rather spooky glow-in-the-dark effect. If you're just picking up one of these sets, this is the one I'd recommend. Funko seems to have taken a renewed interest in the Masters of the Universe brand for 2020, so at least we're getting that out of the year.

For more reviews of POP! Tees: Masters of the Universe releases check out the following:
He-Man