Action Figure Review: The Rock from Masters of the WWE Universe by Mattel 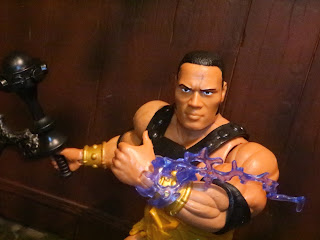 The Rock, the most electrifying man in sports entertainment, has made his way into WWEternia! The third series of Mattel's Masters of the WWE Universe line has been pretty solid all around, featuring the Scareglow inspired Undertaker, the Beast Man inspired Braun Strowman, and the Man-E-Faces inspired trio of The New Day. While the Rock is less of a straight up homage to any one particular Masters of the Universe character, he still fits into the line quite well. Plus, it's the Rock. Even if you don't like wrestling odds are that you still love the Rock. He's made it into G.I. Joe and Masters of the Universe, so now he just needs to get in on Star Wars to complete his domination of the trifecta of the big 1980s toylines! Let's see if we can smell what the Rock is cooking after the break... 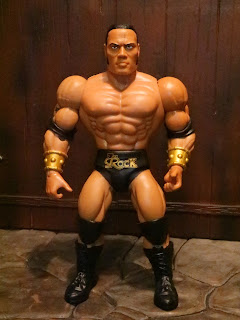 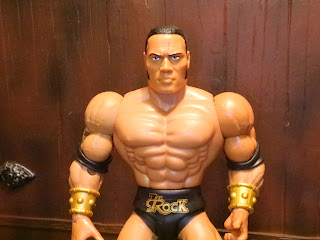 The Positives:
* The base figure of the Rock is pretty standard for this line. The same articulation as most everyone else, the same modular limbs, and the same body. He does have removable elbow pads, though, plus he's sporting the He-Man wrist cuffs. 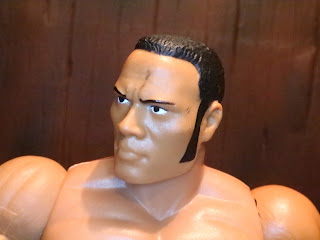 * If you ask me, this definitely looks like an attitude era version of the Rock due to his hair and the sideburns. It's interesting how Mattel has pulled Superstars from multiple different eras for this line, nicely mixing things up for fans. The likeness is pretty good, too. It's certainly not on par with Mattel's recent photoreal WWE Elite releases but that wouldn't fit the style of the line, would it? 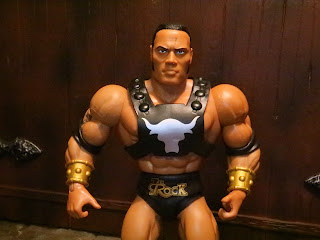 * The Rock is sporting a He-Man like harness that first appeared with the Grayskull Mania John Cena last year, only now it's molded in black with a silver Brahma bull on the front. It's a pretty cool look, giving off a bit of a Wun-Dar vibe due to the color scheme. 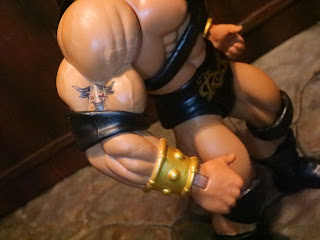 * The Rock also has his classic Brahma bull tattoo on his right bicep (he changed it a few years ago and it's way more intense now). Mattel always does a pretty good job on the tattoos on their WWE figures and it's nice to see that attention to detail continued even with a non-traditional wrestling line like this. 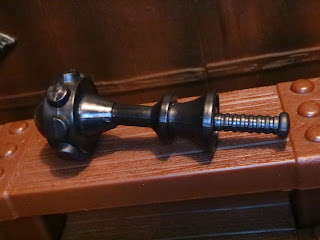 * The Rock includes the Masters of the Universe Classics Man-At-Arms mace, only now in black. (Macho Man also came with the mace, though his was yellow.) It's a cool accessory and looks good with the Rock. I think the minicomic calls it the People's Mace, so you know it's made for laying the smacketh downeth on some jabronis. 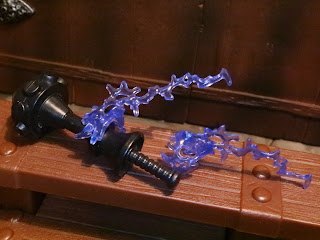 * To make the figure even cooler the Rock comes with some energy effects that can attach to the mace or to his wrists. These are reused from some older DC figures (The DC Multiverse Flash 2-pack and the DC Universe Classics Superman Red and Superman Blue had these) but they work nicely here, too. I love seeing energy effects and these make the Rock stand out even more. 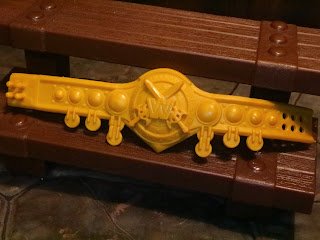 * The coolest accessory that the Rock comes with is the WWEternia Championship. Yes, it's a barbarian/ fantasy inspired wrestling belt. It's all the same color but the detail is very sharp and it fits nicely on most figures. This is a really cool accessory and I was actually surprised by it. I didn't realize that the Rock came with this. 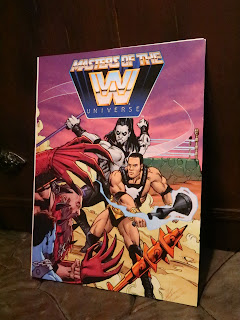 * Behind each standard MOTWWEU release is a minicomic of sorts. It's only 4 pages (cover, bio, comic, and back page with cross sell art) but it looks cool and does offer some cool information on the role of the characters in WWEternia. The art is really cool in these and they definitely give you some decent information about the characters and a short story about the Rock and his role in WWEternia. 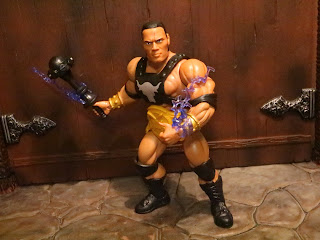 While the Rock doesn't have the most exciting gimmick of the four figures from series 3 he definitely is a very solid toy. The addition of the energy effects and the WWEternian Championship really elevate the figure. Plus, it's a figure of the Rock who can pal around with He-Man and friends. I mean, how cool is that? This is a pretty solid release and with the extra accessories included he's an Epic figure. There's a lot of play value in this line, both for wrestling fans and fans of barbarian/ fantasy toylines. Series 4 seems to be hitting now as well and series 5 is on the way, too, so hopefully WWEternia will continue to grow and grow!
I'm actually kind of surprised that this is the first action figure of the Rock that I've reviewed on the site! For more reviews from Masters of the WWE Universe check out the following:
Braun Strowman
Faker John Cena
Finn Balor
Grayskull Mania
"Macho Man" Randy Savage
The New Day
Rey Mysterio
Roman Reigns
Sting
Triple H
Ultimate WarriorUndertaker
Posted by Barbecue17 at 9/16/2020