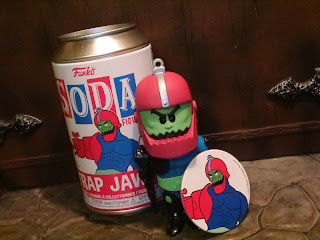 About a month ago I reviewed the Funko Vinyl SODA Moss Man which was supposed to be an SDCC 2020 exclusive but, due to Covid-19, ended up being sold online. I ordered Trap Jaw at the same time but I'm just now getting around to him! That's a testament to both how hard I've been working on this year's 31 Days of Toy Terror and how much Masters of the Universe stuff has been showing up lately. It's been crazy! Trap Jaw is a favorite character of many MOTU fans (that's part of the reason why I did a Trap Jaw-ly special this past July) and Funko was wise to put him in the first year of Vinyl Soda releases. I hope these are selling well as I sure do love them. Most of them have been exclusives, so that has probably helped. Anyways, let't talk about Trap Jaw after the break... 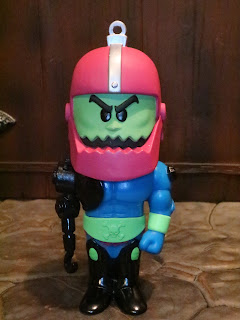 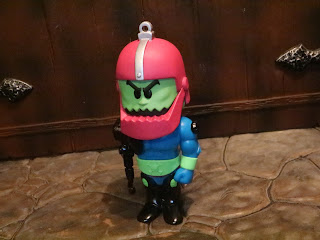 * I love the overall aesthetics of the Vinyl SODA line as they have a style of their own and are quite comical. They're not as stylized as most of Funko's other vinyl lines though the head is definitely a bit oversized. They're not articulated at all, either, but they do make for a cool display piece. They're too large to be considered minifigures, but their clean, colorful appearance does make them display well quite well. I always think they look like 1970s breakfast mascots. 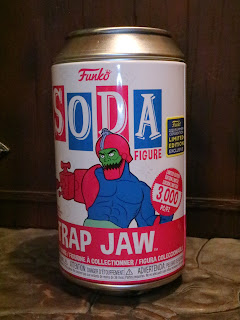 *  I absolutely love the cans these come in! The soda can design is so incredibly cool and makes for a rather unique display piece on a shelf. Trap Jaw soda would probably be a very fruity soda, probably a rather tangy grape or berry. The Trap Jaw used here is the Filmation version which looks great and gives the cans some nice consistency when on display. The can displays all of the expected labels while the back shows off the figure and includes all of the legal info, etc. The top of the can separates so you could use the can to store trinkets as well, and it's even sculpted to look like the top of a soda can. It's made from a much more durable metal than your average soda can, too, so it's quite a nice collectible. 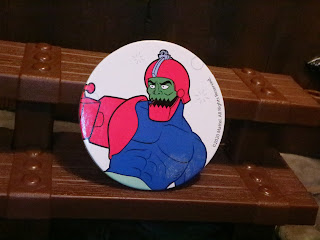 *   Inside the can is a round, sturdy cardboard disc. It's kind of like a POG, though a bit larger. On the front is Trap Jaw's smiling face while the back has the figure's name and the run amount listed (3,000). 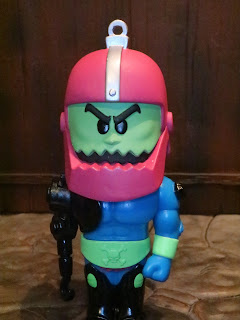 * Here's Trap Jaw! This is such a great rendition of Trap Jaw. Despite him being a villain, there's something about him that's just so lovable. The sculpt really is quite nice as it both captures the line's unqiue aesthetic while also capturing the many details on Trap Jaw. 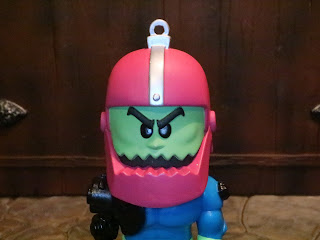 * The headsculpt is great, too. I love the enlarged lower jaw, the severe eyebrows, and the loop on top of his helmet. He looks ready to chow down on the tip of a sword or disappoint Skeletor! 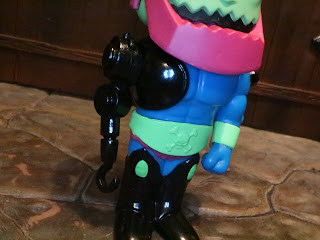 * Trap Jaw doesn't carry a weapon in a traditional sense as he is a weapon. His right arm looks "menacing" and features the claw attachment. The man's a pirate for sure. 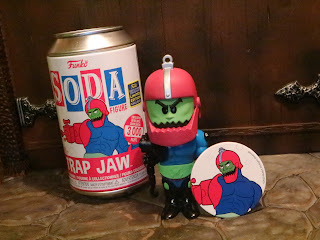 I'm a big fan of this line and Trap Jaw is another Great and a 1/2 figure. These are some excellent collectible figures and while they're not articulated they're still really, really fun. I especially love the cans. The presentation on this line is just flat out really well done. I'm excited to see more releases down the road, particularly the upcoming NYCC 2020 She-Ra (though why an online exclusive has a chase variant is beyond me). Trap Jaw is long sold out but if you shop around you might still find him for a semi-palatable price.