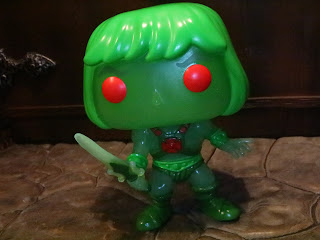 Variations of the Slime Pit He-Man/ Horde Zombie He-Man concept have been crazy popular for a couple of years now and Funko is getting in on the action. There was a Slime Pit He-Man chase variant in the new Funko Soda line and  we've got a He-Man (Slime Pit) POP! vinyl as well! Like Tri-Klops and the POP! + Pez Dispensers, Slime Pit He-Man was intended as a shared exclusive with the now delayed Emerald City Comic Con. He's now been released direct to consumers and as a shared exclusive with GameStop, so you may want to order him from GameStop (I think they're only doing curbside pickup at the moment due to the Coronavirus). Ready for a really cool translucent green He-Man? Then let's check out He-Man (Slime Pit) #952 after the break... 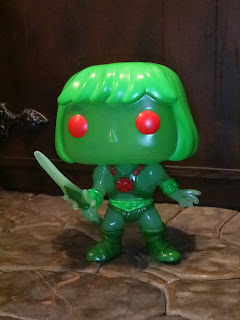 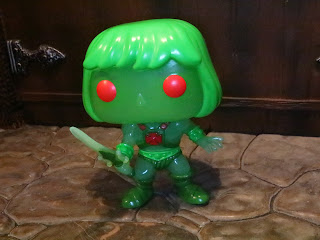 * Slime Pit He-Man does not use the same mold as the original POP! He-Man #17 from 2013 but the same head as He-Man (Battle Armor) #562 from 2017. The body here, which is in a nice action pose, seems to be completely new. Like nearly every other POP! out there, He-Man's head can rotate in order to give a little bit more expression to his poses. 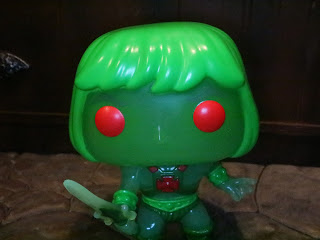 * The head sculpt is reused from the Battle Armor He-Man POP! but that's perfectly fine, right? It's a pretty standard POP! head with the He-Man hair and some spooky red eyes.

*Of course, you can also see that the figure is molded in a translucent green plastic. Not every part is the same color as others but it kind of makes for a very cool effect seeing the different levels of translucency together. 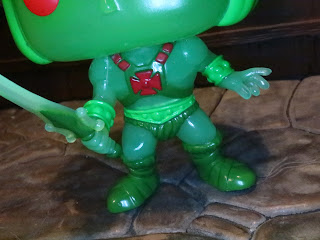 * The paintwork on He-Man's outfit is really nice. Everything is very clean and neat here, which is always a plus. 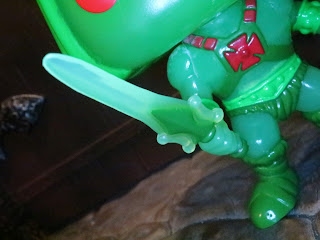 * Last, but not least, is the sword. I love the look of this sword; it's definitely similar to the Power Sword from the MOTUC Horde Zombie He-Man from PowerCon 2019. 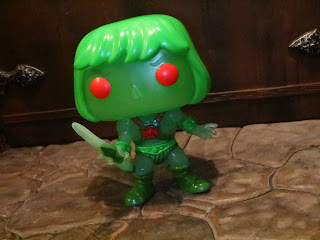 He-Man (Slime Pit) is another Great POP! vinyl. I love the translucent green look of this He-Man variant. Why do y'all think Slime Pit He-Man has gotten so popular over the past few years? We went from him only appearing in one comic in 1986 ("Escape from the Slime Pit") to being a go to He-Man variant. I think it's a combination of him both looking cool (people love translucent toys) and being an easy variant for companies to make since he requires no new tooling (although this one does have a new body, although I bet we'll see it reused). This guy's great, and definitely a nice, slimy POP! for your collection!

He-Man/ Prince Adam is one of my favorite characters and I've reviewed so many action figures based on him that he has his own review archive. Check out Fabulous Secret Powers for all the He-Man reviews you could ever want!