Old School MOTU: Keldor from Masters of the Universe by Mattel 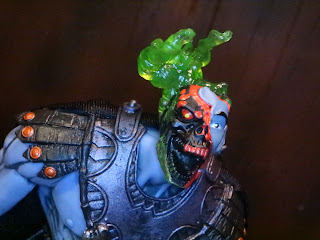 I recently managed to pick up a figure from Mattel's 2002 Masters of the Universe line that I've wanted for quite some time but just hadn't been able to acquire: Keldor! While it was alluded to in the vintage minicomic "The Search for Keldor" that Skeletor and Keldor might be one and the same, it wasn't until the Mike Young Productions cartoon series that the connection was made clear. Ever since them, Keldor has been a key part of Skeletor's origin story and it's doubtful we'll see any future media ignore it. Keldor was released as the SDCC 2003 exclusive back when the 200x line was still going. The 200x line had quite a few prominent characters offered as exclusives (She-Ra, Faker, Moss Man) but Keldor was definitely one of the most difficult to come by. Let's check back this now classic exclusive figure after the break... 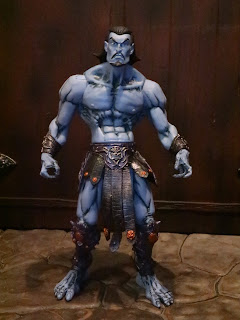 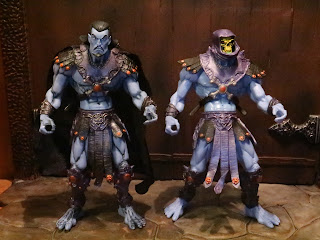 *On the left is the SDCC 2003 exclusive Keldor while the standard 200x Masters of the Universe Skeletor is on the right. Keldor reuses the full Skeletor figure with two additional heads, a new cape, and much better paintwork. I've always loved the Skeletor from this line so having this improved version is actually quite a treat! 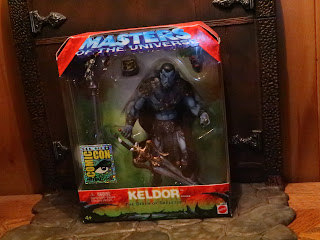 *Most of the exclusive 200x figures came in really nice window boxes sealed in a larger mailer. There are actually two different mailers for Keldor, however. A black and green one from SDCC 2003 and a more standard white mailer that was offered to He-Man.org members. SDCC exclusives were even more of a pain to get back then than they are now, so it was great of He-Man.org and Mattel to work out a way for fans to obtain this guy! 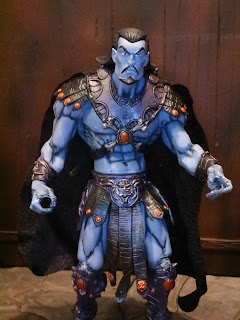 * As I mentioned above, Keldor does use the standard Skeletor body, although with much improved paint applications. During the Masters of the Universe Classics era the style of this line gained the somewhat pejorative description "hyper anime detail" but I've always liked the look of these figures. While they're "leaner" than the vintage MOTU toys, they still look really muscular and built. The detail was incredible and it was cool seeing how each figure's style and musculature was unique. While Keldor/ Skeletor is still ripped, he's also very sinewy looking. His armor is incredible and it really stands out. 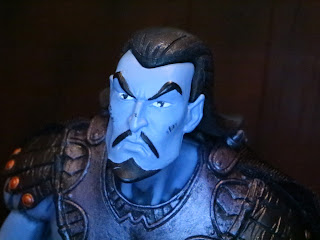 * Keldor has what some fans have referred to as a "Disney villain" look to him. There's just something about him that comes off as both roguishly charming and untrustworthy. I just watched Muppet Treasure Island with my family and, thinking of his performance as Long John Silver,  I could just imagine Keldor being played by someone like a young Tim Curry. That's the kind of villain I could see Keldor as: He's charming, scheming, and deceptive. 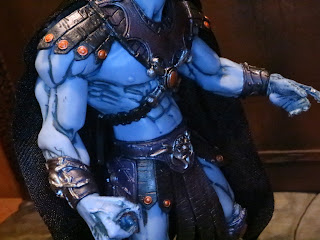 * While few other figures in the line had this level of detail, Keldor's muscles are given a dark wash that really brings out the detail in them. The Four Horsemen really put their all into these sculpts and these highlights just further show off their work. 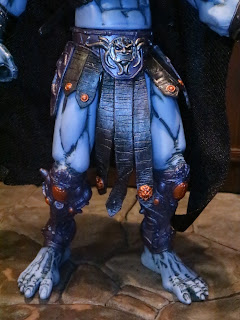 * The A-game paintwork and dark wash goes all the way down to Keldor's feet. His boots and loincloth are all incredibly sculpted and very nicely painted. 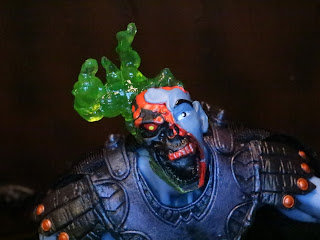 * The most exciting thing about this figure is this alternate head, which depicts Keldor's skin being burned away by the acid which he attempted to use on his brother, Randor. Blocked by the then Captain Randor's shield, the acid splashed back and landed on Keldor's face. The look of anguish, the seared, blackened skull, and the translucent green smoking effect definitely make this one of the coolest portraits in a MOTU line. Actually, Keldor might be the first MOTU figure to ever have an alternate headsculpt. Can anyone think of one earlier? 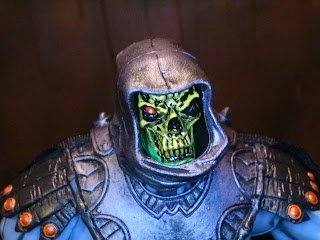 * Mattel included a Skeletor portrait in the set as well. These portraits all swap out easily, so that's a big plus. Skeletor has a darker hood (to match Keldor's darker armor) and a darker wash on his yellow skull than the standard figure. 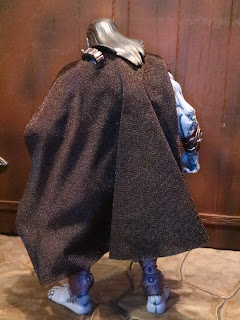 * Adding on an additional cape for Keldor was a really cool idea. The cape simply fits over two pins on the top of the standard Skeletor armor, so it's removable if you want to take it off. It's made from a thinner material but it hangs rather nicely. 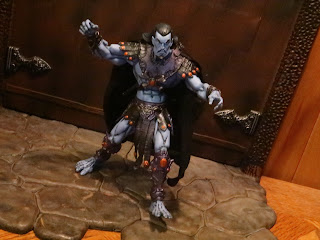 * While the 200x series certainly doesn't have the articulation of MOTUC or most other "modern" toylines, at the time it wasn't as lacking as it may appear today. While Marvel Legends also debuted in 2002 (though Spiderman Classics had already been out for a year or so), MOTU focused more on sculpt, weapons, and action features. Still, these are very durable toys that are quite fun. I actually think they're the best pure toys of any MOTU line out there. Keldor retains Skeletor's action feature: Push the button on his back and his right arm raises and lowers. 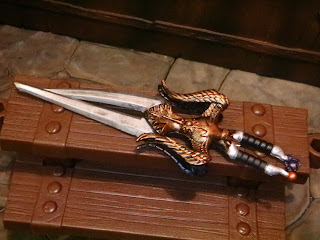 * Keldor includes the same dual swords that Skeletor had, although they attach together much better here and they have a much cooler paintjob. 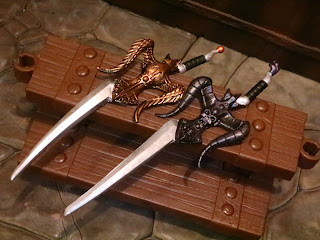 * You get both a heroic sword and an evil looking sword. In the Four Horsemen's original idea for the 200x MOTU series, Skeletor had gained both halves of the Power Sword and was now in control. While that never became an official part of the 200x storyline, these two connecting swords still hint at that story idea. 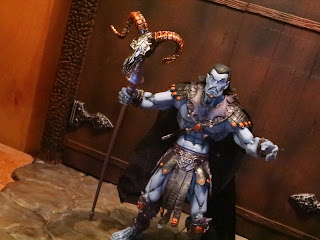 * Keldor is also packing a Havoc staff, too. Again, it's the same as the one included with the 200x Skeletor figure but the paintjob is much cooler: There's a dark wash on the skull and the horns are copper colored. 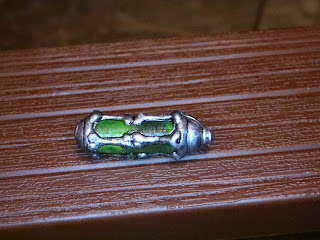 * Lastly, you get a vial of acid! The center of the vial actually looks translucent, so that's pretty cool. It fits just fine in Keldor's left hand. 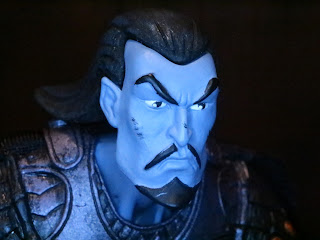 
* I removed my Keldor from the package and he has these little scuffs on his face and nose. It's gotta be a bit of now 17 year old QC oversight, but it's still worth pointing out. 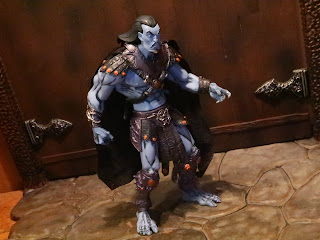 * I totally get that Keldor was made with a budget in mind and reusing Skeletor's body was a priority. Still, I don't love the fact that Keldor looks so gnarly and hunched over. Some new legs would have been great as well, since Keldor wore boots. 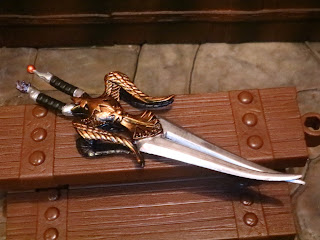 * Keldor's swords look better than any other version of these swords, but the molding on them is still problematic. The orb and claw on the hilts don't fit together as they should and there is a lot of warping on the blades. 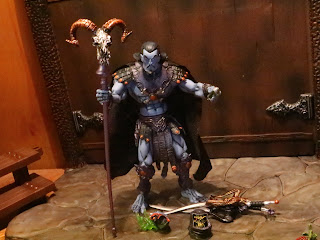 While we've have a nearly uncountable number of Skeletor figures over the years, the only two Keldor figures I can think of are this one and the MOTUC figure. Is this still the definitive Keldor figure? I think so. While both have dual swords and acid vials, this is still the only one with a burning face and, man, that really counts for something. I'm still surprised we never got the burning face in MOTUC! This guy might be pricey but for fans of the 200x series he's still a Great and a 1/2 toy and worth tracking down. Rumor is that Masters of the Universe Origins might introduce a new Keldor figure, so we might be able to add another to the ranks before too long...


I've reviewed so many action figures of Skeletor/ Keldor that he has his own action figure review archive. Check out Snake Mountain for all of my Skeletor reviews!

For more reviews from the 200x Masters of the Universe line check out the following:
Heroes Vs. Villains Gift Pack #1
Posted by Barbecue17 at 3/03/2020