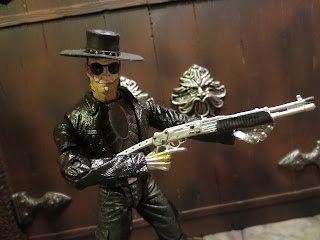 I've said many times before that it is almost impossible to overstate the influence McFarlane Toys had on the action figure industry in the late 1990s/ early 2000s. During that period McFarlane, while  leading the pack in terms of what was possible in sculpting and paint design, had plenty of competition at their heels. Plenty of smaller companies popped up trying to one up the competition by seeing who could add more detail, who could create larger figures, or who could snag a more obscure property. While larger companies like Mattel and Hasbro have typically always had their own in-house designed teams, many of the new smaller companies looked to private studios for creative talent. One of the best teams working in the early 2000s was Plan B Toys. These former Resaurus employees worked on a number of different lines including the amazing Special Forces and Palisades' Resident Evil and The Muppets. They worked for a variety of different companies including Mezco, Diamond, and WizKids. It's a product from their collaboration with WizKids that I'm looking at today: The Street Deacon from Shadowrun Duels. A hybrid between action figures and the Heroclix gaming system based in the Shadowrun Universe, Shadowrun was an action figure line that failed to catch on with gamers and a gaming system that seemed to avoid the attention of most action figure collectors. I've owned eight of the line's thirteen figures for quite a few years (ever since I actually bought them in a game store) and lately I've been wanting to complete my set. The first figure I picked up that I didn't own was the Street Deacon from the first series of figures released in the Summer of 2003. Ready for a closer look? Then join me after the break... 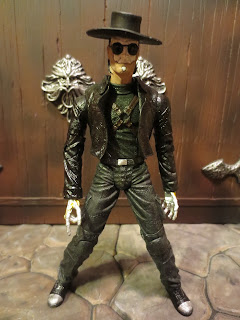 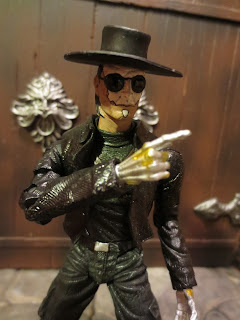 * The characters of Shadowrun Duels are quite interesting. Living in a slightly futuristic world of technology and magic gives the opportunity for a wide variety of characters. The Street Deacon is a human vigilante of some sort that seems to have cybernetic hands. Outfitted in biker clothing with an old fashioned wide brimmed hat, the Street Deacon cuts a fearsome figure. The different materials on the clothes he's wearing have a variety of interesting textures. 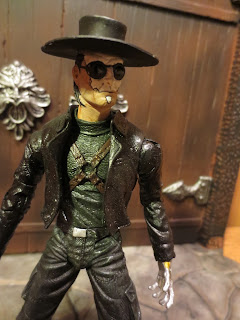 *While he's dressed mostly in black, he's not all the same color. His leather jacket is made from a shinier plastic while his stitched together pants have a flatter color to them. His face paint is quite interesting as well: It hides his expression and kind of reminds me of a skull. Very unsettling! 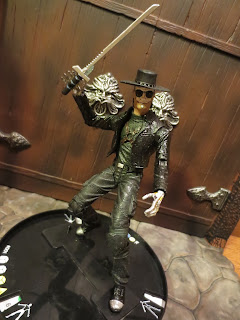 *Super-articulated figures weren't the norm in 2003. The Street Deacon does, however, have a nice variety of articulation, particularly in his arms. You can get a wide variety of poses with him utilizing his shotgun or his katana. 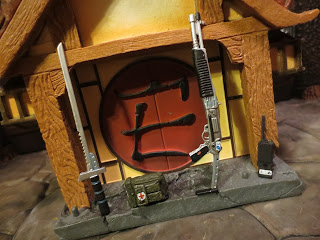 *All of the figures in this series have amazing accessories! The Street Deacon comes with a very cool futuristic katana, a medical pack, a tactical shotgun, and a walkie-talkie. The weapons have holes in the handles so they can be held in the Street Deacon's hand or in the hands of other figures. The paint work on these accessories is quite remarkable. 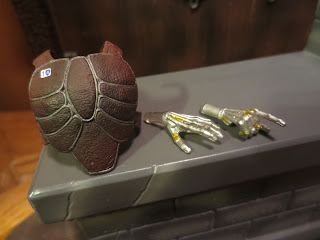 *To further change up his look is a armored vest. I didn't realize it at first but this piece slides off from under the Street Deacon's leather jacket. The little square box on the top left can be found on every accessory in the series; it relates to the game.

There is also a second set of hands. The main set are designed to actually grip the sword or shotgun while the second set have a peg and a hole used to attach other accessories. 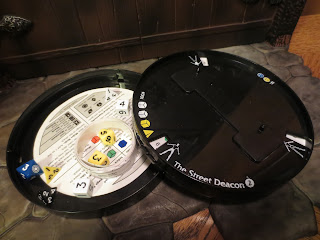 * I love the bases these come with! Even though I've never played the game I still like the fact that they hold everything, display the figure securely, and just look really sharp. You also get 8 various dice (3 D4s, 3 D6s, a D8, and a D10). I've used the dice from these figures in my Dungeons & Dragons games for years. 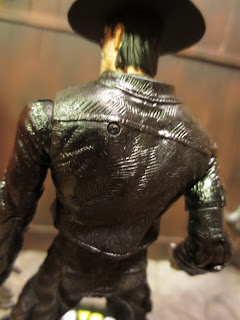 *The only problem I have with this figure is a broken peg on the Street Deacon's back. The idea with these figures was that when playing the game you equipped the character(s) you were playing  with a set amount of equipment (each item has a cost). For various pieces of gear like health packs, radios, and magic artifacts, you could store them on the characters body rather than in their hands. Unfortunately, when removing the health pack from the back of the figure, the peg just came off on its own. 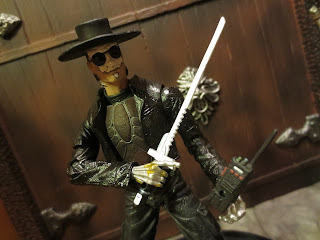 I'm a big fan of this series and I'm glad to be working towards completing my collection. It's a shame these guys didn't sell better (there was a third series shown but it never came out) as they were incredible action figures. The Street Deacon is quite good and a great entry into the line due to his awesome weaponry. Overall, he's a Great 1/2 figure that I'm sure you can fit into a number of various collections if you don't have a Shadowrun Duels collection of your own to include him with.
Posted by Barbecue17 at 8/31/2015