The Revenge of 31 Days of Toy Terror: Cyclops from Big Bucket of Monsters by SCS Direct

Last year during The Curse of 31 Days of Toy Terror I reviewed a handful of minifigures from the toyline "Big Bucket of Monsters." Released by SCS Direct, me and my daughter picked these up from a loose bin at our beloved "Monster Shop" (AKA The Creature's Crypt in Fort Mill, SC) which, sadly, has since closed. Still, I have some cool stuff they designed and good memories to remember them by (plus the business is still around online as they're a cool design studio that makes monster masks and props called Creature Revenge Studios). I've also got quite a few more of these little monsters to check out. For this day of Toy Terror I'm checking out the mythological Cyclops, a one-eyed giant from Greek and Roman mythology. Whenever I think about the Cyclops I always think of Polyphemus from the Odyssey but there are plenty of other examples of the creature as well along with dozens of other one-eyed beings from various cultures across the world. This guy looks quite a bit like the Ray Harryhausen designed Cyclops from The Seventh Voyage of Sinbad, although many depictions of the Cyclops look pretty similar. Let's take a closer look at this guy after the break... 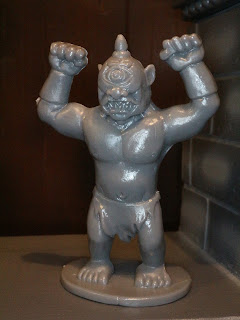 
* One thing I really like about these figures from the Big Bucket of Monsters is that they are made from a very hard, solid plastic. The quality is excellent and the details are very sharp and crisp. The little details on the face are impressive for a 2 inch figure. Even the teeth are well detailed and sharp looking. The Cyclops is a very high quality pieces who stands nicely, too. 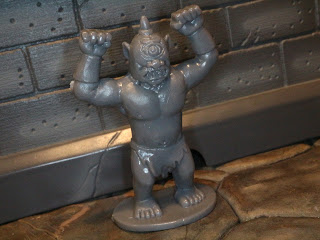 * The pose is fitting here as, when I think of the Cyclops, I think of the angry Polyphemus shouting out that "Nobody" has hurt him or Polyphemus crying out to Poseidon for vengeance against Odysseus as the hero and his men sail away from his island. This guy definitely looks wild and irate with his hands in the hair and only a primitive covering up his own one-eyed monster. He's pretty slick and you could probably get away with bringing him into your English class since he's based on a literary character. 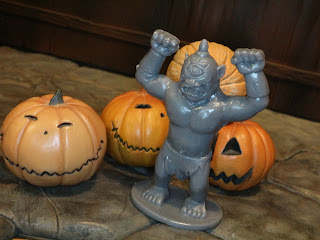 I'm quite a fan of the little creatures from the Big Bucket of Monsters. SCS Direct has released some cool product. For minifigure fans, the fact that you can order a set of 100 of these for $20 isn't too bad at all. These could make for really cool items to pass out to Trick 'r Treaters. I'd much rather have one of these than a peanut butter kiss or some taffy, wouldn't you? The Cyclops is a Great minifigure and the Big Bucket of Monsters is well worth your attention this Halloween season.


If you're down with the Cyclops, check out my review of the Imaginext Cyclops from Fisher-Price.

For more figures from the Big Bucket of Monsters, check out the following:
Dracula
Gillman
Godzilla
Mummy
Restless Ghoul