The Revenge of 31 Days of Toy Terror: Dr. Finkelstein from The Nightmare Before Christmas Trading Figures by Jun Planning 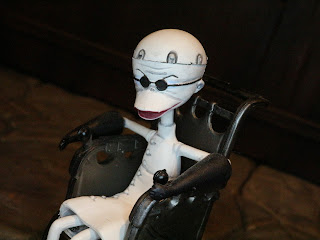 Since there isn't a character in all of The Nightmare Before Christmas who isn't simply incredible, it's always worthwhile reviewing any version of them as part of 31 Days of Toy Terror. This year, since this is The Revenge of 31 Days of Toy Terror, I'm revisiting a Nightmare Before Christmas toyline that I first checked out last year: The 2010 The Nightmare Before Christmas Trading Figures by Jun Planning. Target carried these as part of their Halloween offerings that year and they came unassembled in little marked boxes, similar to blind boxed toys but without the whole spending lots of money in order to possibly buy a duplicate. One of the figures in the first series is the brilliant Dr. Finkelstein, the resident mad scientist in Halloween Town and the one responsible for the creation of the heroic Sally. He also provides valuable assistance to Jack Skellington in helping him on his ill-fated quest to take over Christmas as well. Let's take a closer look at this man of science after the break. Curiosity killed the cat, you know. 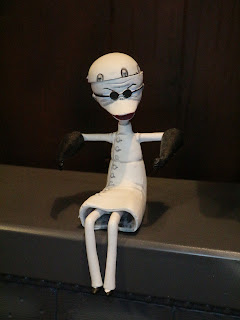 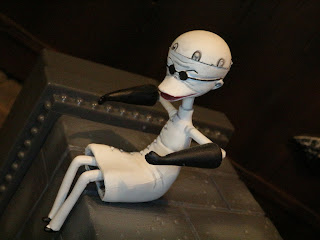 * The good Dr. Finkelstein comes posed in a sitting pose, which makes sense since that is how we always see him. If I remember correctly he probably came in a few pieces and the head and limbs plugged into the torso. He looks great with excellent sculpting and some very nice shading. He really looks like a miniature version of the older NECA figure of the character. 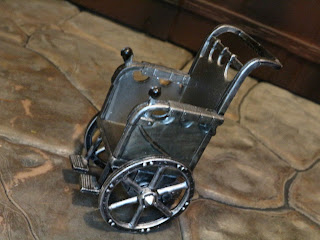 * Since Dr. Finkelstein is a wheelchair user he comes with his awesome self powered wheelchair. It really looks like it's made of metal and it actually has rolling wheels, foot rests, and the joysticks to make it move (note: it doesn't really move on its own). This is a great piece that absolutely completes the figure's look. 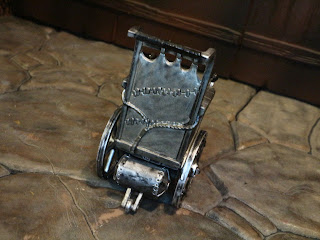 * The back has some more great sculpting and also shows off the power mechanism that runs the device. 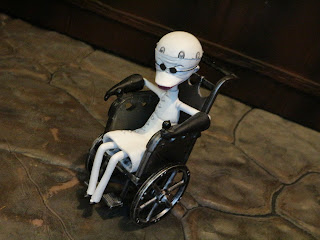 * Dr. Finkelstein fits perfectly in the wheelchair. He looks great and is easily one of the most accurate looking of all of the Jun Planning trading figures. 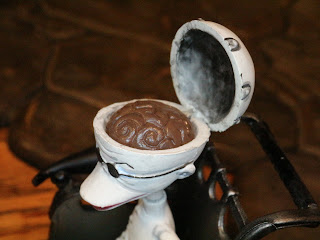 * One other cool feature is that Dr. Finkelstein features a hinged skullcap. Open it up, just like in the film, and you can see his brain! Super icky and spooky! 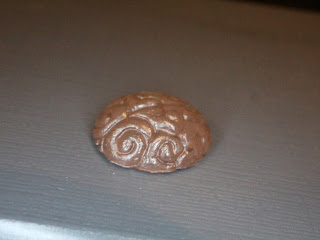 * Not only does the good doctor's head open up to show off his brain but the brain is removable, too. It's kinds of cool that these little figures come with their own accessories. * The only negative I have with this figure is that Dr. Finkelsteins wheelchair, if not resting on a flat surface, does tend to fall forward. That seems like something you absolutely wouldn't want from a wheelchair! 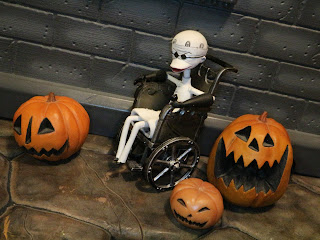 While my wife and I have quite a few collectibles from The Nightmare Before Christmas, Dr. Finkelstein is one of the pieces of  memorabilia from the film that sits in our curio cabinet in our living room. He's an incredible looking minifigure, quite possibly the most impressive in this series, and an excellent representation of the character. If you're a fan of the character or just want a toy of one of the greatest scientific minds if all time, check this one out.

Surprisingly this is the first action figure of Dr. Finkelstein I've reviewed on the site. For more reviews from Jun Planning's The Nightmare Before Christmas Trading Figures, check out the following:
Oogie Boogie
Posted by Barbecue17 at 10/19/2018