The Revenge of 31 Days of Toy Terror: Mummy & Grim Reaper #9308 from Playmobil 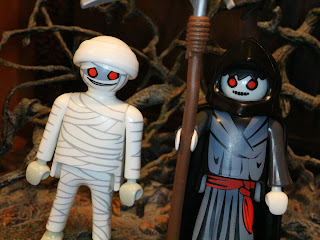 Earlier this month I went to a very cool toy shop in Hendersonville, NC, Dancing Bear Toys, where I found all three of the new Playmobil Halloween themed two packs. I had been looking for these as I knew they would be just perfect for the The Revenge if 31 Days of Toy Terror. First up is the Mummy & Grim Reaper two pack which includes, fittingly, a Mummy and a Grim Reaper. These are pretty creepy looking, right? What is it about the Playmobil horror themed figures that is just so unsettling. Lego has released quite a few horror figures, but they're a bit more cartoonish and charming. Playmobil figures are just... odd. I really don't know how to describe them. Tell me what you think in the comments below! Let's jump in and check these out, shall we? 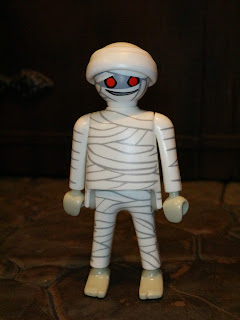 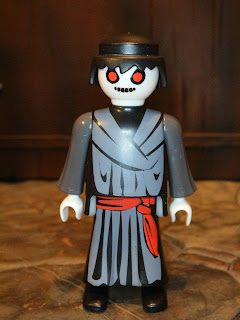 Accessories: Cape, hood, and a scythe.

Non-Scalper Price: $6 dollars for the pair 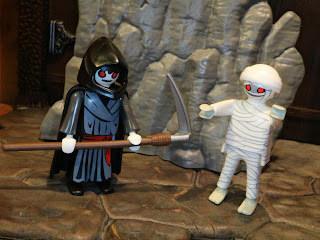 * Like any other Playmobil figures both of these figures feature the standard articulation that most all other Klickies have. They're easy to pose and manipulate but really don't take many unique poses. Still, there is something fun and classic about them and they're durable, fun toys. 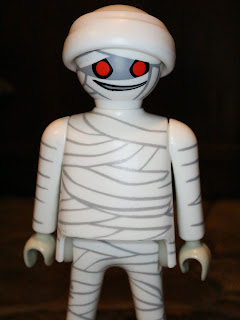 * The Mummy is a pretty simple figure that features a wrapped head, bandage wrappings painted on the body and limbs, and two glowing red eyes peering through an open slit around the eyes. Another cool feature is that the hands and feet are colored differently from the standard white of the torso wrappings. 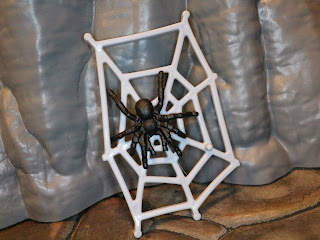 * Included with the set, which I'm assuming is intended for the Mummy, is a spider web with a spider. The spider web is fairly small and features a black spider that can be positioned on a couple different spots on the web thanks to the various pegs on the web. 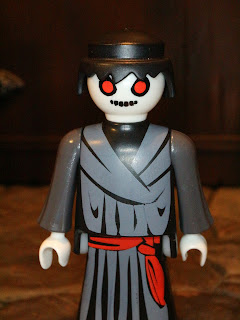 * The second figure is the Grim Reaper and he's a pretty unusual character. He's wearing one of the robed bodies which has grey robes and a red belt painted on the body. The head is the crazy part, though, as there is something insanely disturbing about it. The red eyes, white skin, and odd (maybe skeletal?) teeth definitely make this fellow look insanely off-putting. He reminds me of something weird from a game like Undertale or something. 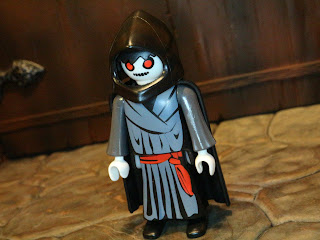 * To fully give him the Grim Reaper vibe the figure comes with a cape and a hood that easily clips on the figure. 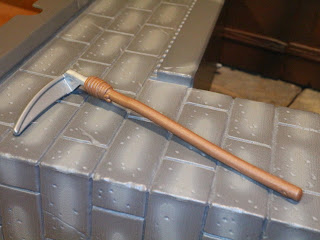 * The Grim Reaper also comes wielding a really impressive scythe. Seriously, the sculpt on this is darn good and it even has a separately painted silver blade. 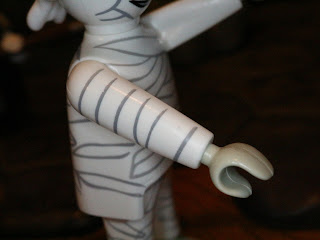 
* This one is really odd but the right arm on the Mummy is kind of loose. When it is up at certain angles it falls down a bit. I've had many, many Playmobil figures over the years but this is the first one I've ever had any problems with. 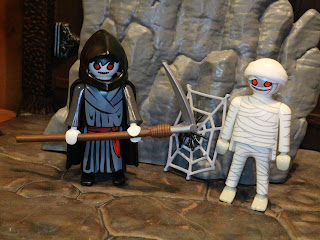 While this set is really creepy, it also is a bit dull. Not bad, just a bit dull. It's still a Good and a 1/2 set, especially considering this pair only costs $6 dollars, but there definitely is something a bit overly simplistic about them. They do fit in well with the other Hallowee themed sets, though, so if you own those you might really dig these. If you can get over those unsettling red eyes, though.

For more Playmobil reviews, check out the following:
Take Along Haunted House #9312