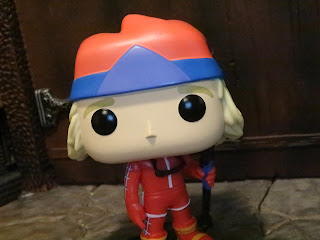 My wife and I celebrated out 16th wedding anniversary last month and for an anniversary gift she surprised me with two Funko POP! vinyls: Harry and Lloyd in their swanky ski gear from Dumb and Dumber. I don't purchase too many non-Masters of the Universe POP! vinyls these days but I was pretty excited to receive these as a gift. I absolutely love Dumb and Dumber. It came out when I was in 5th grade and I remember going to see it with my parents on Christmas of 1994. Street Fighter had just came out as well but my mom said she didn't want to watch fighting on Christmas so we went and saw Dumb and Dumber. I think my mom walked out saying that she would have rather watched fighting. Over the years, especially as I entered into middle school, it was a movie I found infinitely re-watchable. Is it a "dumb" comedy that relies on one-liners and gross out humor? Well, yeah, but there's something about the movie that's a bit more clever, too, with some rather layered jokes. I'm not saying it's The Big Lebowski or anything, but it's a solid film that I love that captures some of the best and worst of the 1990s. Today I'll start by looking at the ski version of Harry Dunne (Jeff Daniels) in one of his ski outfits he wears once the pair reaches Aspen, Colorado and discovers the briefcase they've been toting across the US contained one million dollars. Let's make an IOU, hop into a heart shaped tub, and check out Ski Harry Dunne after the break... 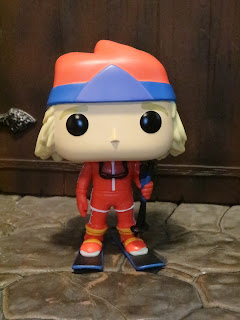 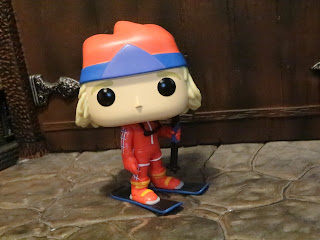 * Harry Dunne can swivel at the head, like most other POP vinyls. He also has a built in stand thanks to the fact that he's on skis. They give him a nice solid balance which helps keep him from tipping over and also give him a bit more of a unique look. 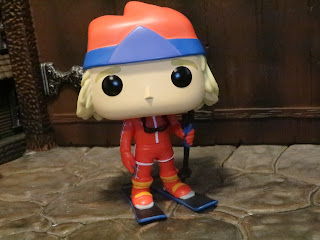 * Harry's not going to be one of those POP! vinyls that everyone will recognize but if you own this one and someone else recognizes him then you've probably made a friend for life. Harry actually wears a couple different ski suits in the film and sometimes has a larger coat over this outfit, but this is what he's actually going to ski with Mary Swanson but instead gets his tongue stuck on the metal of the chair lift. There are lots of cool little details on the figure like the sunglasses hanging around his neck and the ski poles in his left hand. 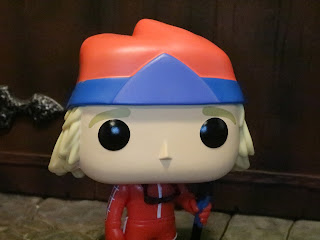 * It's so crazy how POP! vinyls are so simple looking and yet I feel like I can see a Jeff Daniels likeness in this POP! vinyl. The hair is spot on and the hat is very distinctive. Again, he's not a figure that is instantly recognizable like a Deadpool or Darth Vader but Funko did a nice job in delivering a stylized figure of the actor in this specific role. 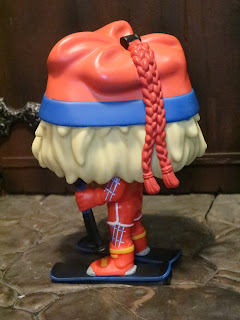 * There are some other cool little details on the back and sides of the figure. His hat has a funny cord of some sort hanging down from the top and there are some spiderweb-like designs printed on the shoulders and thighs of Harry's outfit. 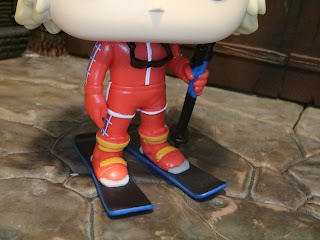 * The skis and ski poles are really cool. They look great and definitely help Harry stand out. I can't think of too many other items he could have come with. Maybe a cup of warm water or a functional toilet? 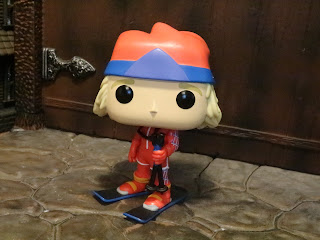 Funko's slogan "Everyone is a fan of something" definitely rings true when you see releases like this. It's easy to know that you can make action figures and merchandise based on stuff like Marvel, DC, G.I. Joe, Star Wars, Masters of the Universe, Harry Potter, and other properties that have a huge following. It's less common to see stuff based on some of the random movies, TV shows, and artists that Funko picks. It's kind of fun, though, when something you really like that seems in no way connected with action figures, etc. does get a toy. Harry Dunne is a pretty great POP! vinyl from one of the best comedies of the 1990s. Dumb and Dumber is a movie that I grew up watching and that seems to pull me back to a specific time in popular culture whenever I watch it or listen to the soundtrack and I'm thrilled that my wife realized how sentimental I am for a film that involves a guy with a worm farm and another who drives a van turned into a sheepdog. This is a Great and a 1/2 POP! and it shows that Funko pays attention to the details even when they're dealing with product from what isn't an A-list fandom.

This is the first toy of Harry Dunne I've reviewed. For more reviews from POP! Movies check out the following:
Danny Torrance #458 from The Shining
Dr. Ian Malcom #552 from Jurassic Park
Gage & Church #729 from Pet Sematary
Harold #846 from Scary Stories to Tell in the Dark
Jack Torrance #456 from The Shining
Michael Myers #03 from Halloween
Norman Bates #466 from Psycho
Pennywise #55 from It
Pennywise (with Beaver Hat) #779 from It: Chapter Two
Sam #57 from Trick 'r Treat Sam with Pumpkin & Sack #1002 from Trick 'r Treat
Posted by Barbecue17 at 6/07/2021