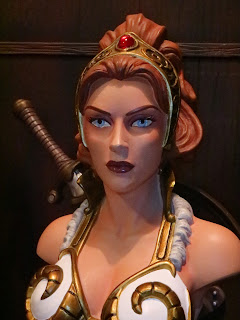 While most Masters of the Universe stuff has traditionally been toys aimed at kids (or toys aimed at collectors), there definitely has been some high end product as well. In 2015 Tweeterhead entered Eternia and Etheria with a very limited series of quarter scale busts of the A-list MOTU cast. Teela was the fourth bust in the series and was released in late 2016. Unlike the rest of the heroic warriors (other than He-Man, of course), Teela has appeared in every incarnation of Masters of the Universe. yes, even The New Adventures of He-Man! Teela was one of the most interesting figures from the 1982 series as her figure was essentially two figures combined together. According to Scott "ToyGuru" Neitlich, the idea behind the accessories included with the vintage Teela figure was that she was essentially two figures in one: The Sorceress/ Goddess and Teela! Teela has had many different origins and appearances but I think Tweeterhead did an excellent job of capturing the essence of Teela in this statue. It's very classic and very "vintage" MOTU! Let's check out this incredible rendition of the Warrior Goddess Teela after the break... 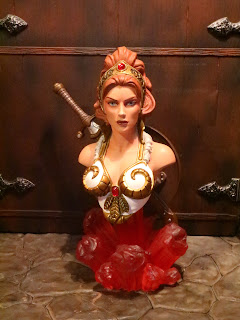 Pieces: Base, busy, and sword/shield piece. 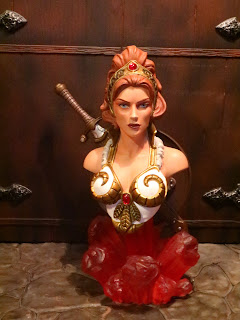 * Teela is a quarter scale bust that was shipped in three pieces: You get Teela herself, her sword and shield as one piece, and the red "explosion" base. The pieces are held together via strong magnets which keep things securely attached without causing as much scraping of the statue if you need to pack things up at any time. I love the overall aesthetics of this line. I own three of the six busts released (I'm currently looking for Evil-Lyn, Beast Man, and She-Ra) and I'm impressed by how well they display together and how they feel in scale with one another. They're very classy and elegant. If an ideal Masters of the Universe move were to be made, it would be amazing to see Teela realized in this way! 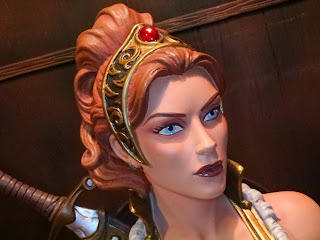 * Teela is drop dead gorgeous. I mean, she definitely looks like she's not putting up wit any nonsense, but she's still quite attractive. The sculpting and paintwork are perfect and really capture the character's likeness beautifully. 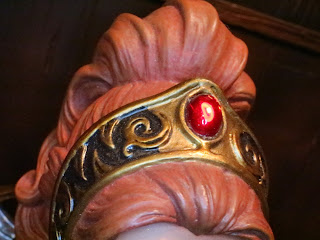 * Teela's tiara not only keeps her hair in place during battle but it also features some incredible artistry. The solicitation for the statue advertised the red crystals on the statue as Swarovski crystals, which are something I had to look up. It turns out that Swarovski is an Austrian jewelry company. The red crystal is definitely eye catching and adds another dimension to the statue. 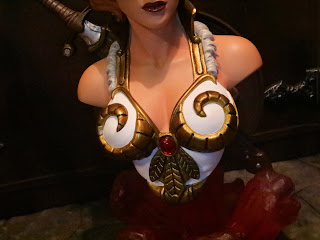 * Teela's outfit is also depicted here with beautiful sculpting, neat paintwork, and another red Swarovski crystal in the middle of her chest plate. 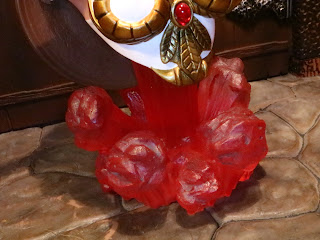 * I will admit that I'm a bit mixed on the red "exploding rocks" base. It is very dynamic and pays homage to the card backs of the vintage toyline but at the same time it feels just a little out of place here. It does keep Teela standing, though, and it feels very solid. The translucent effect is cool and I imagine it would look pretty sweet with some LEDs behind it to cause it to glow. 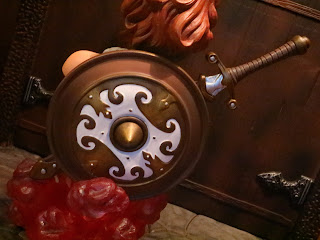 * On her back Teela has her shield (which looks like the shield her vintage toy came with, only much more detailed) and a sword (which looks quite a bit like the sword she usually toted around in the Filmation cartoon. I never really cared for the snake armor for Teela, so I'm glad that these "accessories" of Teela's were what was retained for this line. They look incredible! 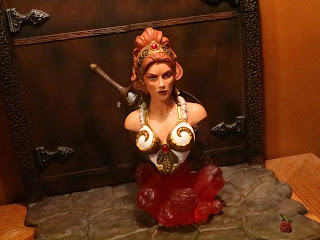 I really like this statue. Tweeterhead put out some nice Masters of the Universe product in this line and Teela is one of  my favorites. She's just so elegant and cool! While some folks wouldn't recognize her right away, anyone familiar with Teela could spot her in an instant. This is a Great and a 1/2 bust and it's easily one of the best renditions of Teela we've received in any collectible. I think it's a fine representation of the Warrior Goddess Teela on today's tribute list, don't you?


Was Teela one of your first loves? If so, check out my reviews of a few Teela toys such as the M.U.S.C.L.E. green Teela and the standard M.O.T.U.S.C.L.E Teela, the Mega Construx Teela from the Battle for Eternia Collection and Teela from Battle Bones, the 200x Snake Teela, the ReAction Teela (Shiva), the neo-vintage Teela and Frozen Teela, and Super7's Ultimate Teela.
Posted by Barbecue17 at 4/28/2020