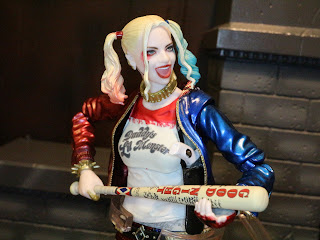 It's no secret that I'm a fan of the Academy Award winning film Suicide Squad. Yeah, it's not a perfect movie but, for a DC fan like me, the chance to see a fairly diverse roster of DC characters interact made this one pretty enjoyable. I'm also a huge fan of Margot Robbie's portrayal of Harley Quinn. I've really narrowed my modern collecting focus down to DC action figures, Star Wars: The Black Series, and One:12 Collective, so I've been able to score more versions of Batman related characters, which is possibly my primary collecting passion. Today I'm looking at Medicom's Harley Quinn from their MAFEX line. Being a collector of 6-7 inch DC figures and a huge Harley Quinn fan, I've already picked up a few versions of the character in this same outfit by various companies. Last year I reviewed Mattel's DC Comics Multiverse versions of the character while earlier this year I reviewed the S.H. Figuarts Harley Quinn (I also have the One:12 Collective and Hot Toys releases preordered!) While Mattel's effort is the $20 dollar mass market figure you might expect, Bandai's S.H. Figuarts release is pretty impressive. So impressive, in fact, that I didn't think I would end up buying the MAFEX release. It turns out, Medicom's MAFEX version might be better. If you're really deciding between these two (as they're the most similar 6 inch "high end" Harley Quinn figures on the market) I would encourage you to open up the S.H. Figuarts review in another window and check these out side by side. I've done my best to structure these both the same overall, so you should be able to compare and contrast the two. Let's check this one out, shall we? 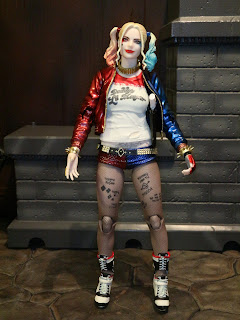 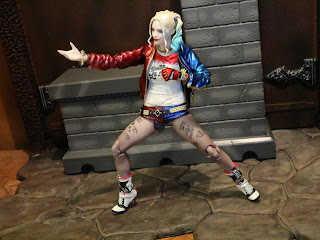 * The MAFEX Harley Quinn feels a bit sturdier than previous MAFEX releases I've purchased but she has the same great articulation you expect from this product range (probably better, particularly the crazy hip, mid-torso, shoulder, and head movement. She's a little over 6 inches tall, making her taller than the S.H. Figuarts version and in-line with most of Mattel's movie based Multiverse line. 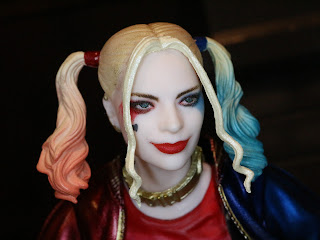 * I would argue that the biggest difference between the S.H. Figuarts Harley Quinn and the MAFEX version is the style of the portraits. While the S.H. Figuarts version really bears an impressive realistic likeness to Margot Robbie, this version is a bit more stylized. It's still clearly Robbie's Harley Quinn, but in a different style that's appealing in it's own way. If you love the movie look but want to integrate it into a comic based figure collection, this is the one to go with. I love it, especially the excellent paintwork. 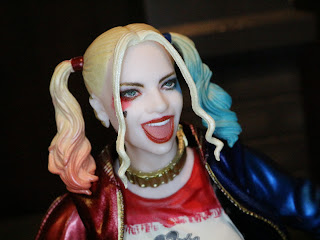 * This Harley only comes with two portraits (although two more are coming as extras with the No. 42 Harley Quinn MAFEX) but they're both pretty cool and easy to swap out. The first one was a bit more standard while this one captures Harley mid-laugh. Again, the paint is excellent here. 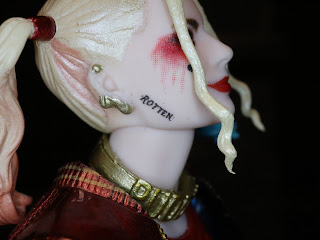 * One thing that I really like is the face printing technique used here. From a short distance it looks crazy impressive, as seen in the makeup and in the tattoos on Harley's face. The S.H. Figuarts version as missing the "Rotten" tattoo, but MAFEX managed to include it on both sculpts. 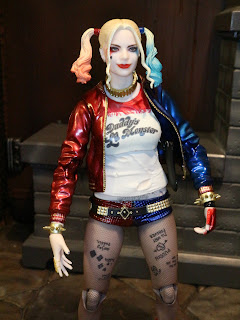 * Here's Harley! I've already spoken about this outfit plenty of times (I like it) and I think MAFEX did a great job. I think S.H. Figuarts did a better job with capturing realistic proportions for Harley, but this one certainly isn't bad, either. The jacket body is a separate piece, but it's not removable. You can also see that the holster itself (but not the shoulder harness) is a separate piece underneath the left side of the jacket. 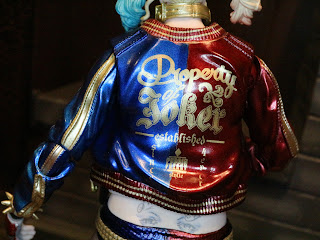 * MAFEX's jacket is much shinier than Bandai's. The gold also seems more pronounced. The paintwork and printing is very neat and clean and looks fantastic. 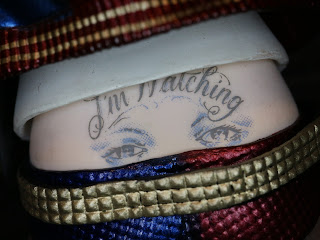 * The S.H. Figuarts figure was missing quite a few of Harley's tattoos, including this "I'm Watching" tattoo on her lower back. MAFEX's printing method really makes this look like actual body ink and adds quite a bit to the character's vibe. 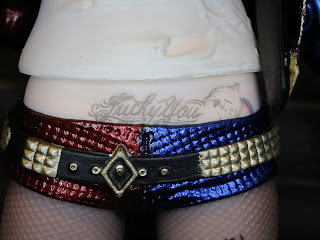 * MAFEX also included the "Lucky You" tattoo on Harley's lower stomach. Again, the printing is excellent. I've never even noticed there's a little dolphin jumping in front of a rainbow here. Also, take note: Harley's belt is a separate piece that is floating over her waist. 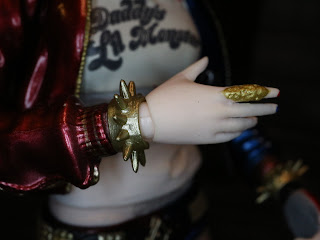 * Harley is sporting a slick, metallic glove on her left hand and a long finger ring on her index finger on her right hand. Also, she's wearing two gold spiked bracelets that are indeed removable. 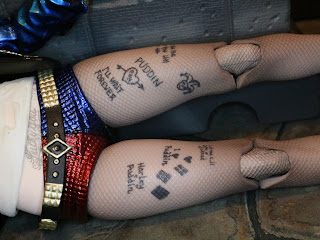 * Medicom used the same trick as Mattel and Bandai in capturing Harley's fishnets (paint the legs a few shades darker while giving them a crosshatched texture) and I think they did a pretty good job. While I might argue that Bandai's efforts look a bit more realistic, Medicom did a better job on the tattoos. I'm really curious as to why Bandai left so many of the tattoos off of their figure; any thoughts? 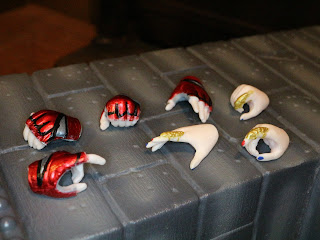 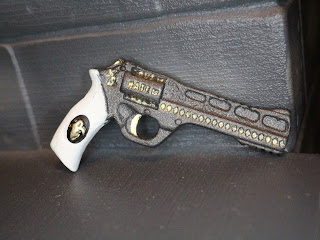 * Harley's customized revolver looks incredible. It has some tasteful gold trim along with the words "Love" and "Hate" on the cylinder, just like in the film. 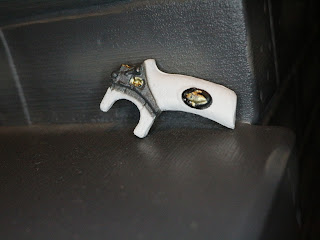 * Interestingly, Harley's revolver does not fit into the holster. Instead, this unusual faux-revolver handle fits in to the holster. I guess Medicom didn't want to make the holster too bulky, so this is an interesting way to tackle that. 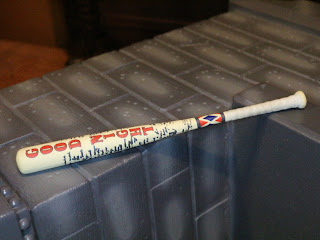 * Harley also includes her baseball bat. This is actually the best version of the Suicide Squad bat released as the paint apps are tighter and the writing is present all over the bat. It's not legible but it looks cool. 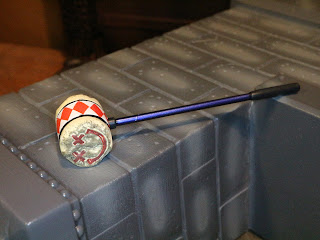 * The MAFEX Harley comes with a mallet, which is really cool. This is way better than the mallet that came with Mattel's Toys 'R Us exclusive Harley as this one actually looks like the movie version and has some excellent sculpting and paint apps. 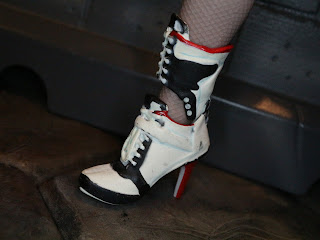 * Harley's high heels are much cooler on the MAFEX version than on the S.H. Figuarts version. The sculpt and paintwork is just all around better. 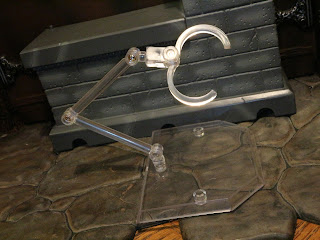 * Lastly, Harley comes with the same stand that a number of other MAFEX figures include. The stand features multiple points of articulation to help keep your figure posed: A swivel at the base, three hinges on the arm, a swivel at the top, and a hinged clasp to secure the figure. The arm can be removed from the base and placed in any one of the three holes present there. These seem to be pretty standard across MAFEX releases and work really well. 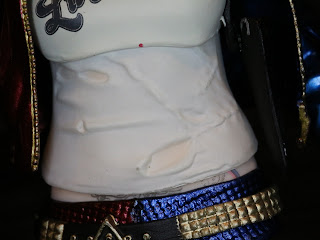 
* These tears on Harley's shirt should show some skin underneath, but the paint tone really makes it hard to tell. They're very clear and noticeable on the S.H. Figuarts figure, but not so much here. 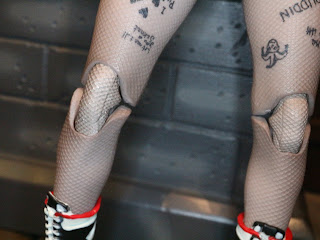 * While overall I like the articulation on the figure, I'm not a fan of the knee joints. The functionality is fine but the aesthetics are pretty hideous. Those knee joints just look really, really awkward. 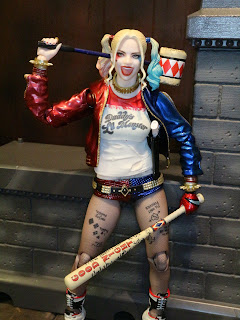 Overall, while the S.H. Figuarts has a more realistic appearance and more attractive articulation, I think the MAFEX figure edges it out a bit. Not only is it less expensive (I found mine for under $40) but it has more accurate tattoos, more accessories, and a display stand. I wouldn't disparage anyone's choice of which of which figures is better between the S.H. Figuarts or the MAFEX versions, as they're both pretty impressive. Still, I like this design style quite a bit and the attention to accuracy on costume details feels stronger here. The mallet is also pretty slick as is the fact that MAFEX gives you a display stand. I think Harley is a pretty Epic figure and probably the best movie based Harley Quinn currently on the market.

If you're looking for more MAFEX reviews, check out the following: