Unite the League: Knightmare Batman No. 031 from Batman v. Superman MAFEX by Medicom 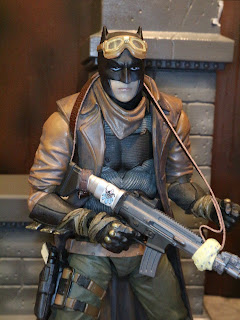 Over the next few months I'll be celebrating the impending release of Justice League by lumping all of my reviews containing the heroes and villains of the film together using the "Unite the League" banner. Today I'm looking at Medicom's MAFEX version Ben Affleck's Batman in one of my favorite scenes from Batman v. Superman: Knightmare Batman! I love this costume so much that while I already have the Mattel version (and the One:12 Collective version preordered), I definitely needed the MAFEX version, too. The Medicom's MAFEX line has really improved over the past year or so and their releases of Armored Batman and Harley Quinn have been some of my favorite releases over the past year.  Let's check out this incredible looking Knightmare Batman figure after the break... 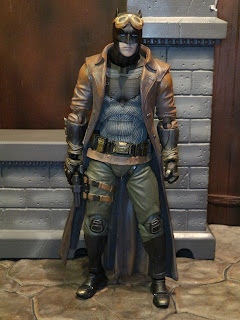 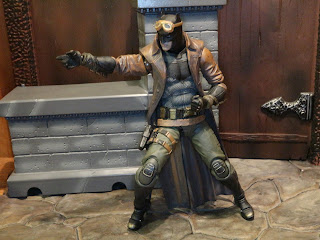 * Medicom puts some great articulation into their MAFEX figures and they've also been steadily improving the durability and quality control on the figures, too. Knightmare Batman is an incredible figure to pose and display in a multitude of different ways. While these are definitely not toys that you'd give a kid, they look awesome on display and are very fun to mess around with. 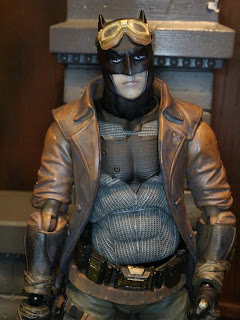 * Knightmare Batman has one of my favorite Batman costumes ever and I'm thrilled by how well Medicom has captured it in action figure form. Not only is the sculpt great (it really does capture the look of multiple layers of clothing) but every piece has it's own unique texture. The Batsuit has the look of a woven, armored material while the trenchcoat has the mottled texture of real leather. There's a lot of superb work here! 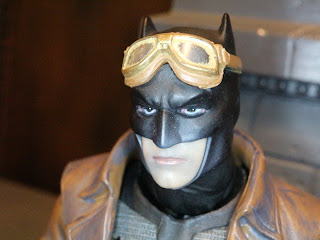 * The headsculpt is also quite impressive. The MAFEX line tends to have a somewhat stylized appearance (perhaps an anime influence) and I really like the aesthetic. The shape of the cowl and the eyes are really well done here. The goggles also look really cool. They're not removable but they do look like a separate piece. They even have a dusty paint effect on them to give them that weathered, "running through the wastelands" appearance that all the cool road warriors want to replicate. 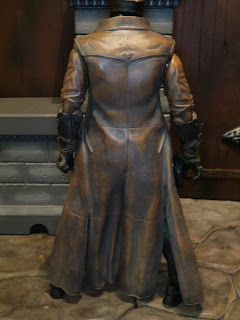 * Here's a look at the back of the trenchcoat so you can see not only how it hangs but how it has a great dark wash, giving it a realistic appearance. The body of the coat is removable, but the sleeves are sculpted as part of the arms. 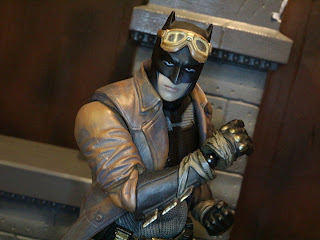 * I love the look of Batman's gauntlets here. They're rugged, rough, and nice and straight. You all know how it drives me crazy when action figure packaging bends up Batman's gauntlets. These are straight and look like they could cause some damage to a Parademon or two. 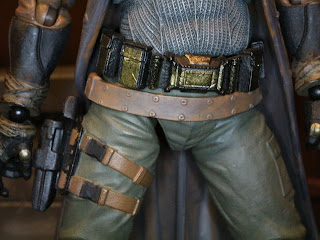 * Not only is Bruce sporting his utility belt but he's also sporting a pistol belt with a holster. The belt could probably be removed but the holster is permanently attached to the right hip. It holds the included Colt 45 caliber pistol perfectly. 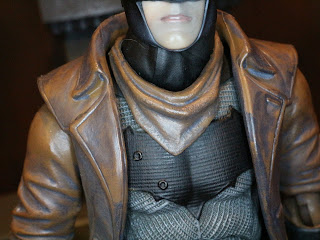 * Batman includes a bandanna that can fit over his neck (you just have to remove the head). It's a simple piece that drapes over but it does have it's own unique paint applications.


*Also, notice the bullet marks in Batman's chest armor. That is a very cool detail that I missed until I looked at the pictures. 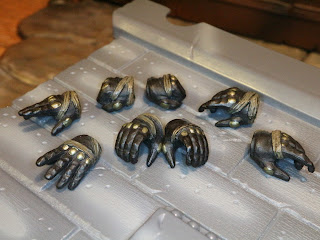 * Knightmare Batman includes four pairs of hands: A pair of open hands, a pair of fists, a pair of pistol grips, and a pair of more standard grips. They swap out easily (although the pegs they slide onto are a little too thin for comfort, but I'll get to that in a minute. 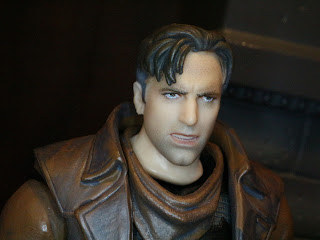 * This angry, unmasked Bruce Wayne head is another really cool extra. Again, it features the stylized appearance of the MAFEX line, but I like it. It looks really impressive and fits in well with the other figures in the line. The paintwork is pretty impressive, particularly the work on the hair and the stubble. 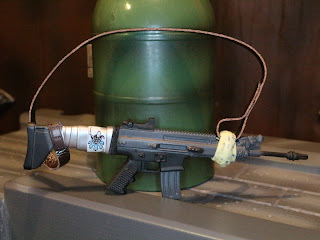 * One of the more unusual aspects of the Knightmare scene in BvS (and possibly in the film overall) is the fact that Batman uses firearms. I'm pretty mixed on this decision, but their inclusion is film accurate. Medicom's work on Batman's SCAR-L assault rifle is incredible. The paint is amazing (I love the joker card taped to the rear stock) and the actual pleather-like sling is incredible. This is one of the best 1/12th scale firearms I own! 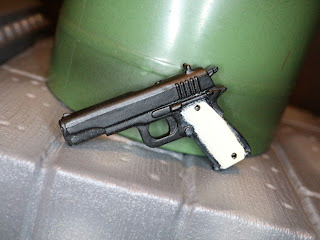 * Batman also carries a Colt MkIV Series 80 pistol. The pistol has a strong sculpt and the same ivory handles as the pistol seen in the film. 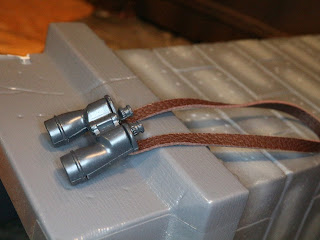 * Another cool accessory is this pair of binoculars. They too feature a soft goods, pleather-like sling, allowing Bats to tote them around. 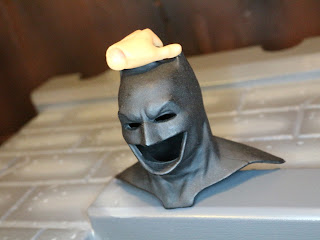 * One of the cool things that Medicom does with the MAFEX line is include accessories for previously released figure with new releases. Knightmare Batman includes quite a few extra pieces for both the BvS Superman figure and Armored Batman. While this removed Batman cowl is for use with the Knightmare Batman figure, the additional left hand that can hold the cowl (they are separate pieces) is intended to be used with Superman to reenact the scene from Bruce's vision. 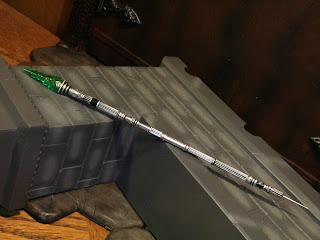 * Also included is the Kryptonite spear from Batman v. Superman. This is an incredible accessory with intricate sculpting and a translucent Kryptonite tip on the end. Be careful with it, though: It seems like it could be a bit fragile. 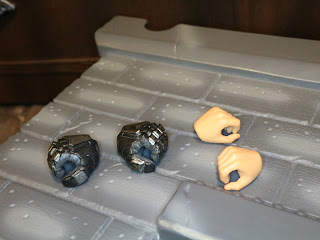 * Since the Kryptonite spear could be used with either Armored Batman or Superman (since both of them wielded it at some point during the film), Medicom included a pair of grasping hands for each figure. In addition to the 8 hands for Knightmare Batman, you now get 2 Armored Batman hands and 3 Superman hands. That's 13 hands included with this set! 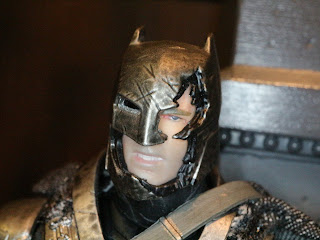 * Last, and certainly not least, this figure includes an alternate battle damaged head for use with Armored Batman. This is an incredible portrait as it really looks like someone in a helmet. The visible head underneath seems adequately scaled and proportioned for the line. Impressive work! 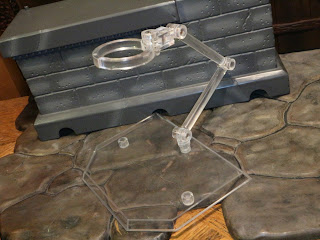 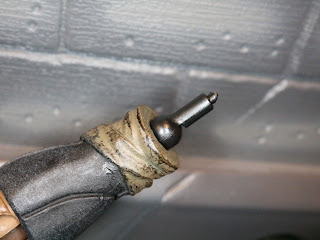 * Be careful when swapping out hands. I haven't had any problems but the pins on the wrists are so small that I could see an accidental breakage occurring during a careless swap. 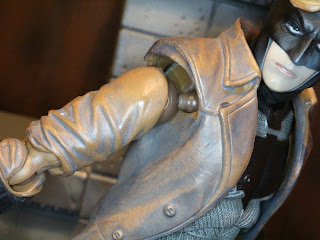 * This isn't really a negative but more of an observation: Make sure when you're posing a MAFEX figure that you push the shoulder and hip joints back together after posing. They're designed to extend out to help facilitate better posing and then to snap back into place for a better appearance. The system works really well, but at a glance you may think the figure is deeply flaws. It's not. 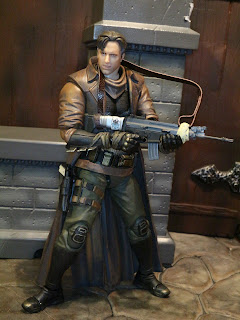 Knightmare Batman is another Epic release from MAFEX. They're just getting better and better and they feel so much more satisfying than many mainstream releases you'd find at mass market retailers. This is easily one of my favorite figures released this year due to the excellent sculpt, terrific accessories, multiple hands, plentiful articulation, and cool extras included for use with previous figures. MAFEX definitely has a great thing going right now and I'd love to see them continue to improve. I hope they don't out price themselves, though, as many of their upcoming releases seem to have suggested retail prices that are about $20 to $30 dollars higher than what is available now. For now, though, their modern DCEU based figures are hard to beat.

I've reviewed dozens of Batman figures in my Dark Knight Gallery, so make sure to check them out there!

If you're looking for more DC MAFEX figures, check out the following: