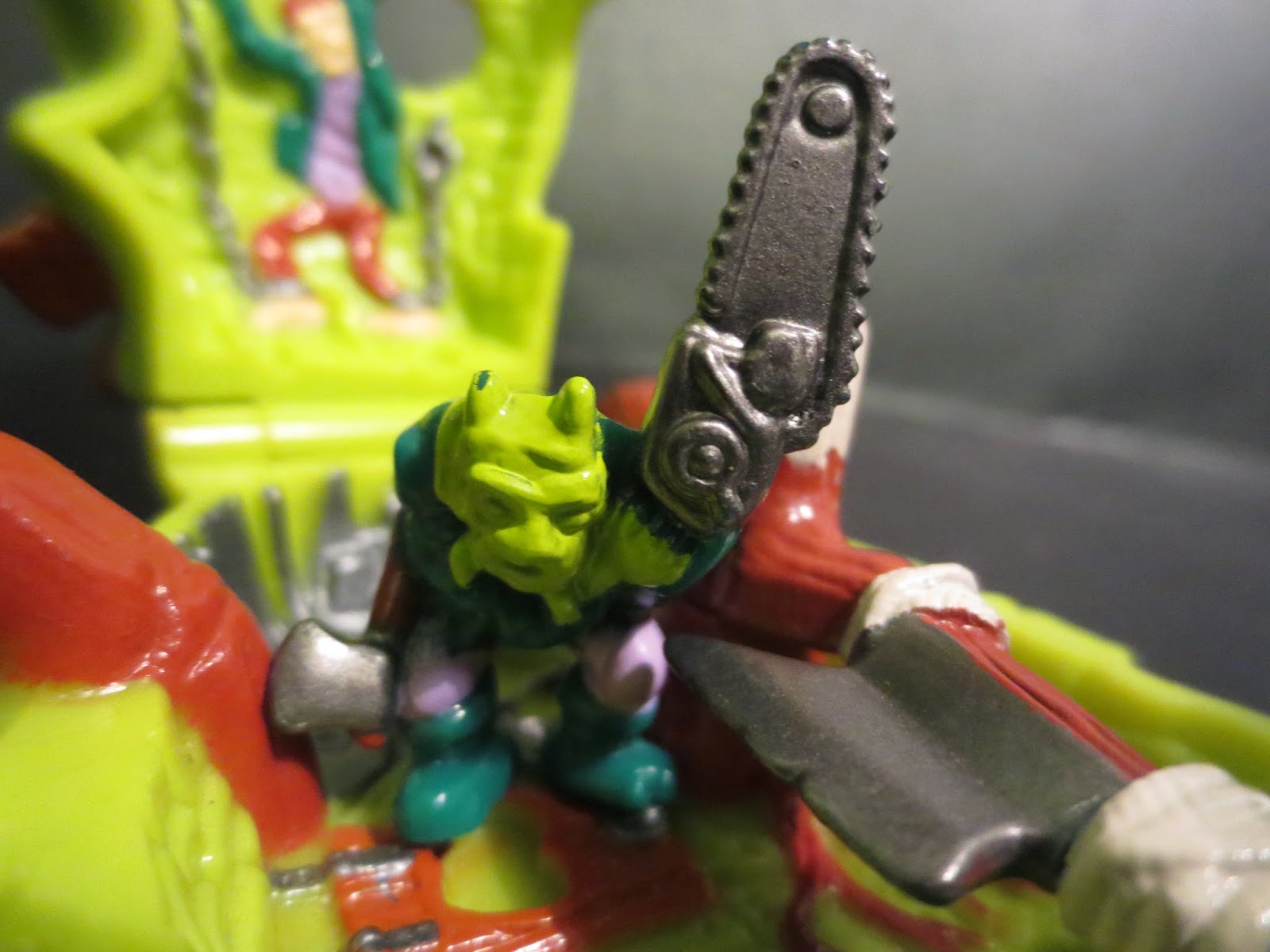 I've been getting some great feedback from readers and it seems that many of you love Micro Monday! I love it too, as these old Mighty Max sets are just a ton of fun to review and share with you all. While I love picking up and reviewing the newest toylines, some of these classic lines are just as fun to collect and review as well, especially when it's a set I either have really strong childhood memories of (Skull Dungeon) or a set that I never owned as a child and am now experiencing for the first time (Lockjaw). Today's set is another series two Horror Head that I never owned as a childhood: Mighty Max Hammers Ax-Man! It's another wonderfully gruesome playset that features a really neat villain figure. Ready for a look at this set? Then join me after the break... 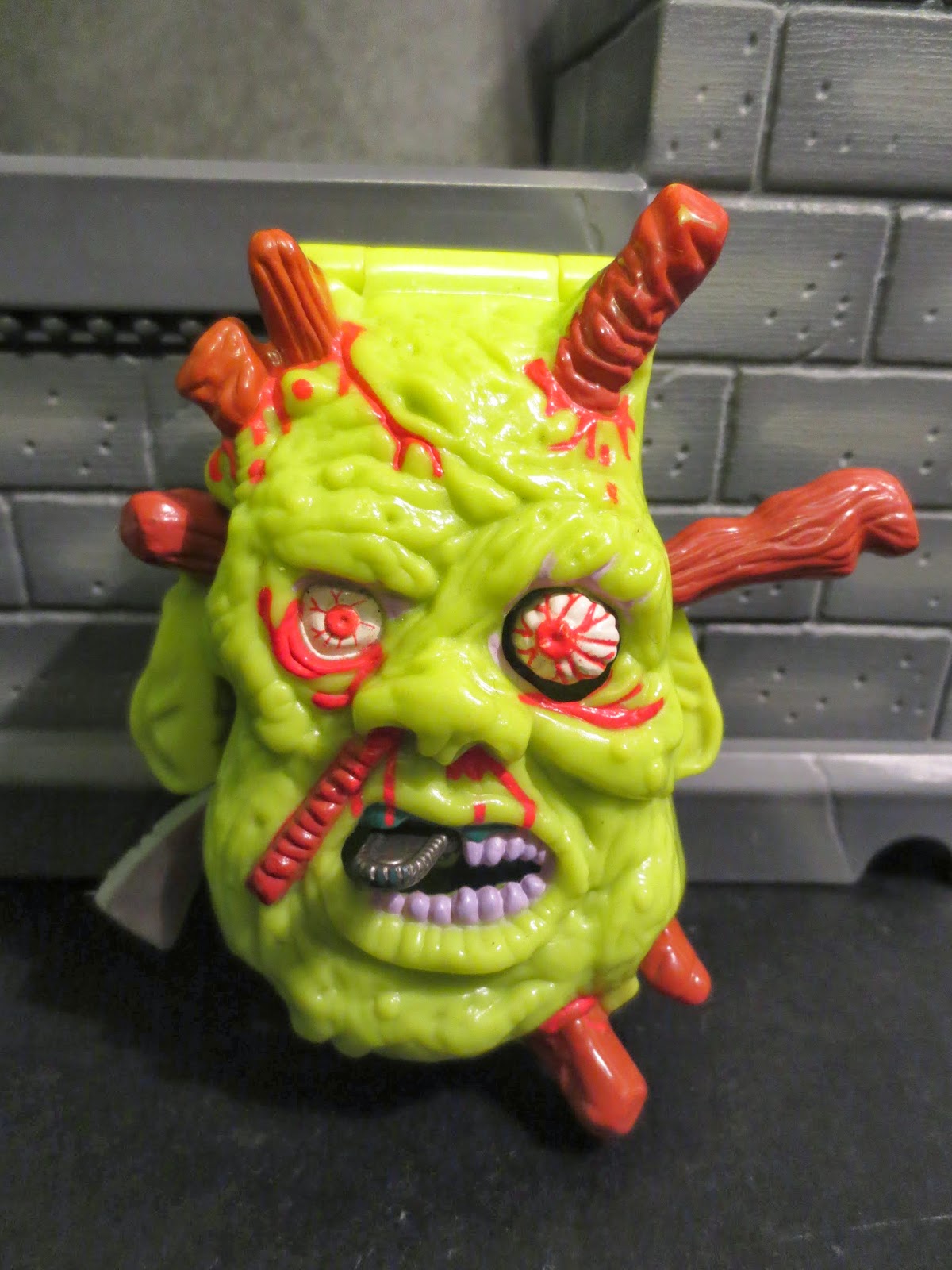 Ax-Man is a Horror Head so he is only around three inches tall and two inches wide. While the character Ax-Man seems to be some kind of serial killer or slasher, the case itself reminds me more of a zombie of some sort. He's got putrid green skin, bloodshot eyeballs, and various wooden stakes poking out of his head. He's really quite gruesome, particularly with the blood dripping from his nose, his wounds, and his eyeballs. Can you imagine this toy being on toy shelves at Wal-Mart or Toys 'R Us today? Some soccer mom would be complaining to CNN that this toy ruined her child's life or something. I particularly like the chainsaw tongue. It seems quite impractical, but I think its outright awesomeness makes up for that. Interestingly, you can move one of the wooden spikes to both make the blade on Ax-Man's right cheek move up and down and to make his left eye twitch. Twitchy! 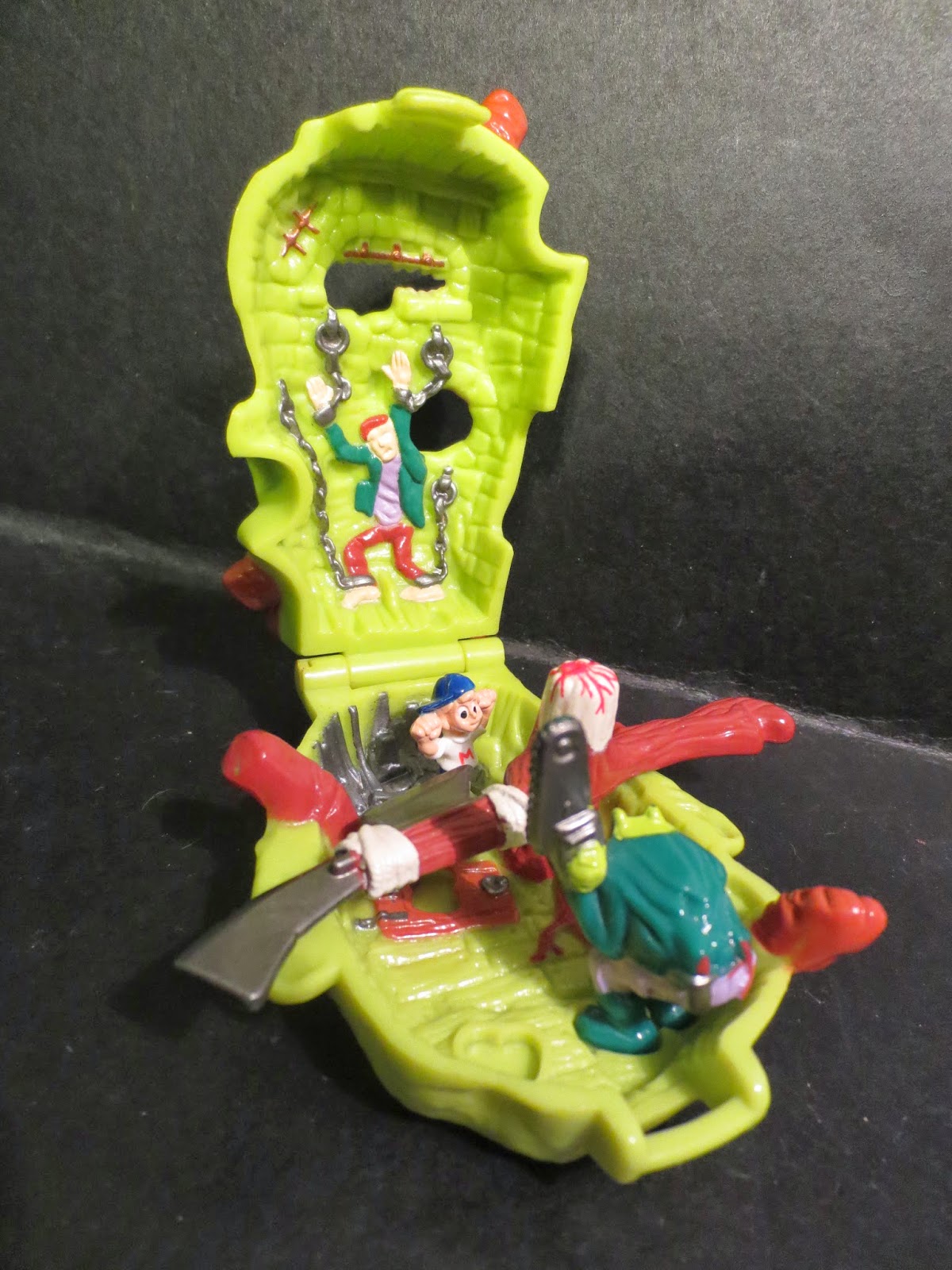 When opened up the base of the Horror Head stays flat while the face of the set elevates up to a 90 degree angle. The set appears to be some sort of dungeon complete with a spinning blade trap and a prisoner shackled to the wall. Once again, it's another nicely defined playset that improves upon the series one sets. 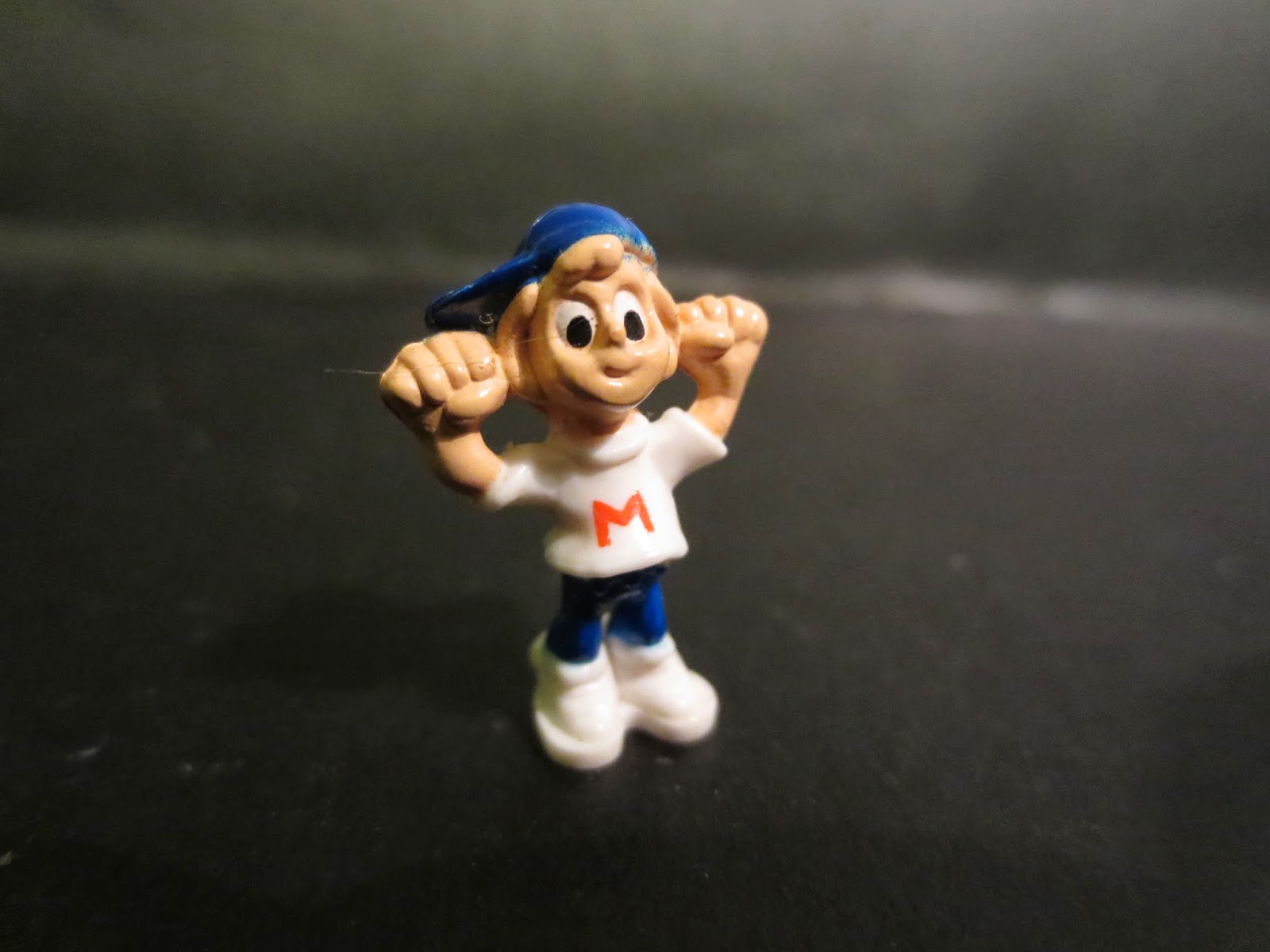 As always, there is a random Max figure included. This set came with one of the eight "kid" Max figures. I call this one the taunting Max because he has his hands up against his head like he's saying "Nanna nanna boo boo" or some crap to the Ax-Man. He's wearing a stylish dark blue baseball cap. 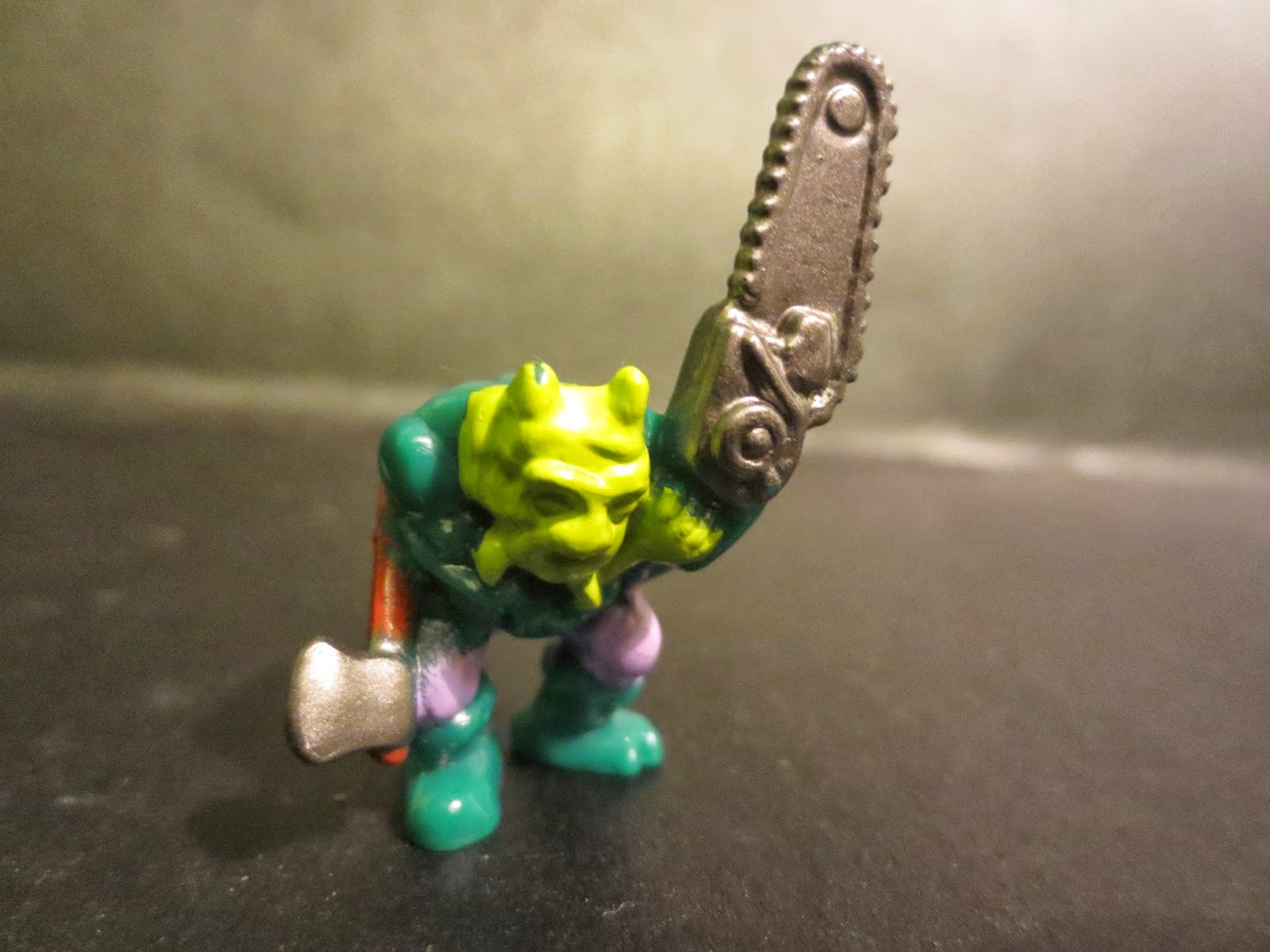 Ax-Man is a really cool villain, although strangely he is wielding a chainsaw and not an ax. In the European releases his name was Spike but it was changed for some reason for the US release. He's a hunched over figure with a grotesque green face and purple pants. He kind of reminds me of Scissorman from the Clocktower games, but his face kind of reminds me of a Gotal. While he's carrying a chainsaw, he does have a knife, a hammer, and a small ax on his belt. 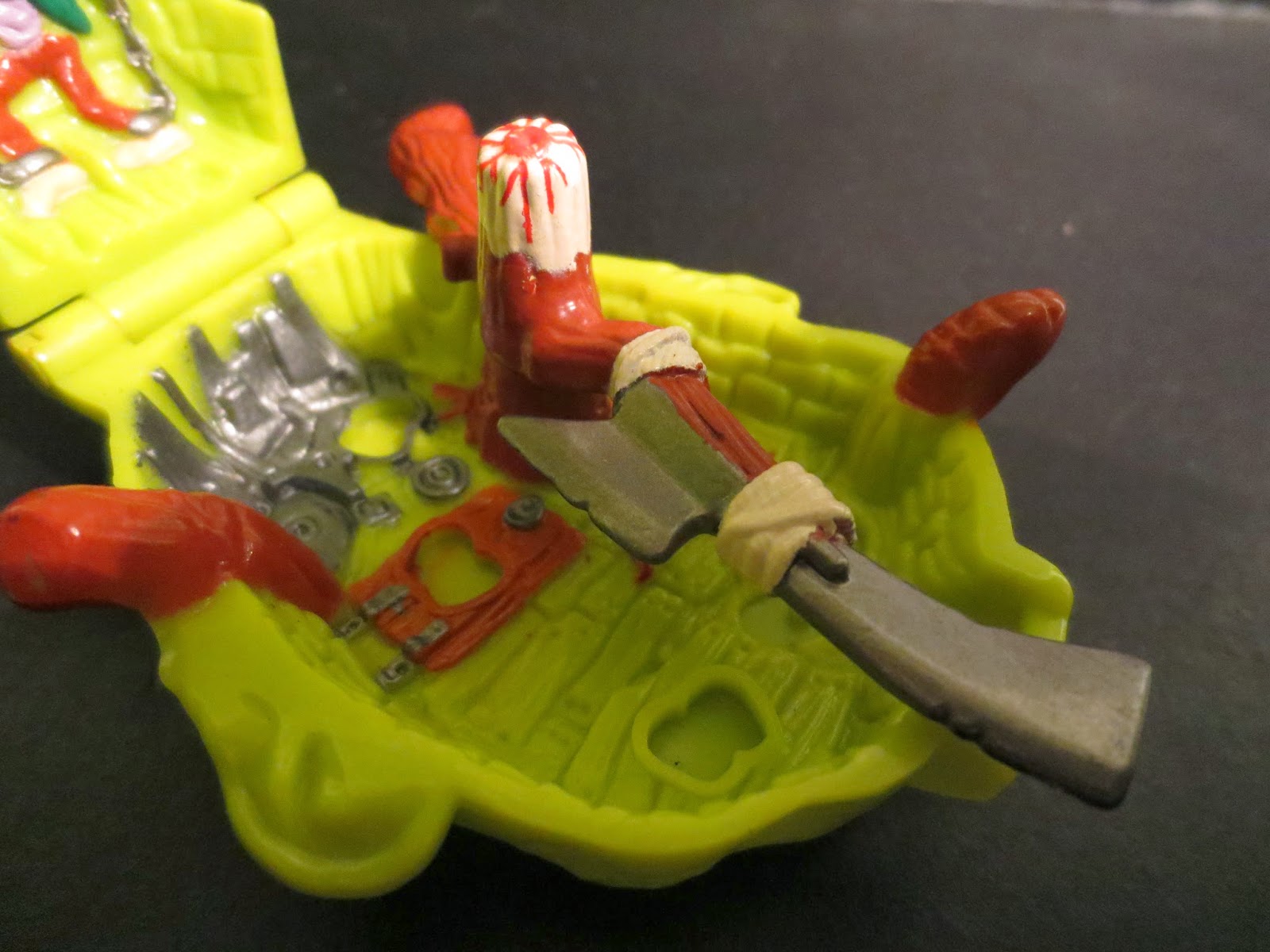 The base of the set looks like an old dungeon as the walls have stones of various shapes and sizes, the floor is covered with old boards, and there is some weird metal contraption and a trapdoor. There's also tree roots that look to be springing up from the floor. Of particular interest is the spinning blade. It's tied to a giant limb and you can swing it across most of the play area to chop down Max or any other intruders in Ax-Man's lair. While there is a footprint for Ax-Man to stand in, there are actually three footprints for Max to stand in. I think that's a feature rather unique to this set. 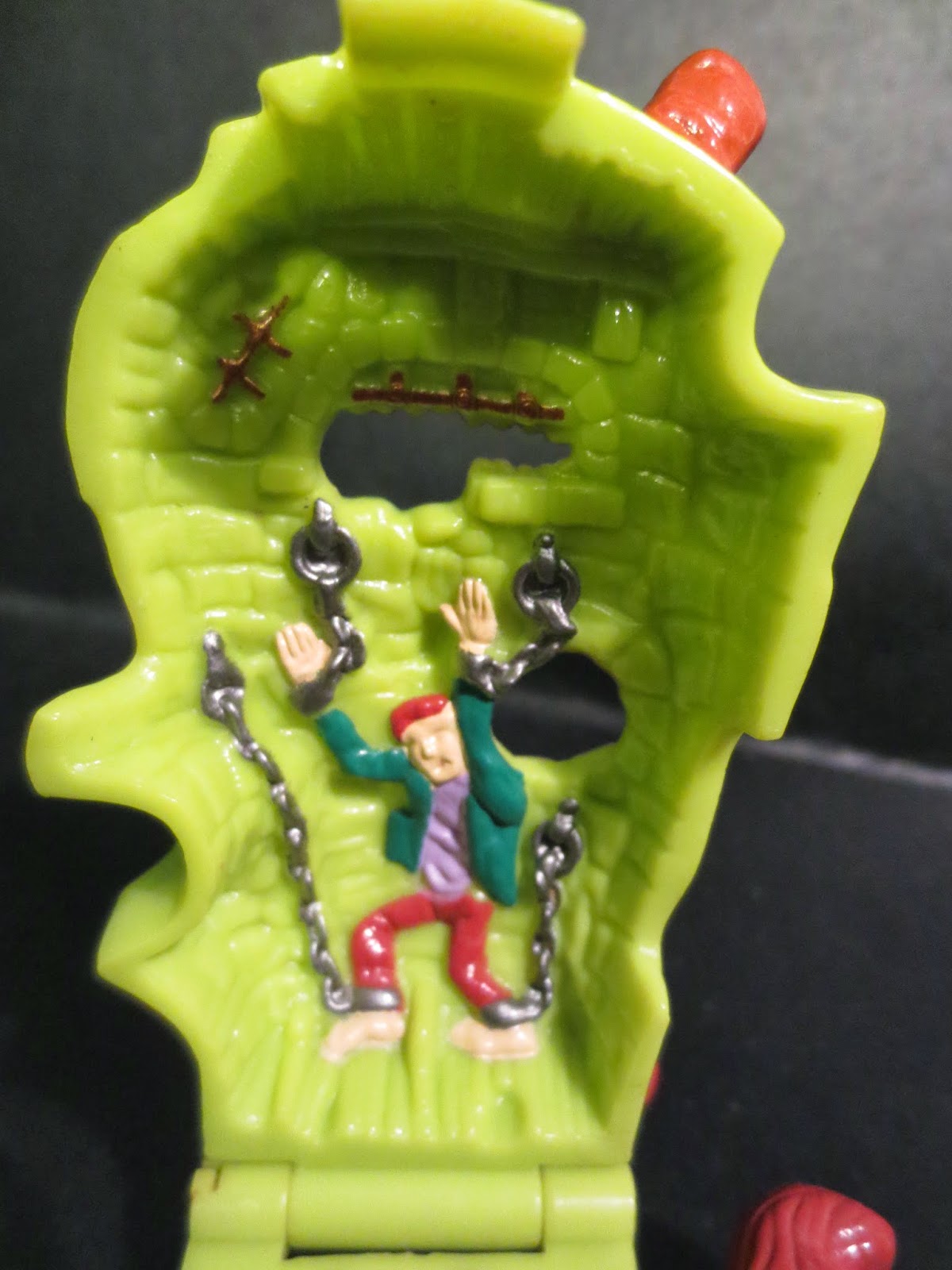 The back wall here doesn't have any area to hold any figures; it's simply a display piece. It's a stony background with an odd looking man shackled up to a wall. Who is he? Why is he here? According to the mini-comic on the back of the set, this poor guy is someone that Ax-Man has decided to kill as revenge for some nondescript mistreatment in his own past. I'm sure Max ends up saving him. 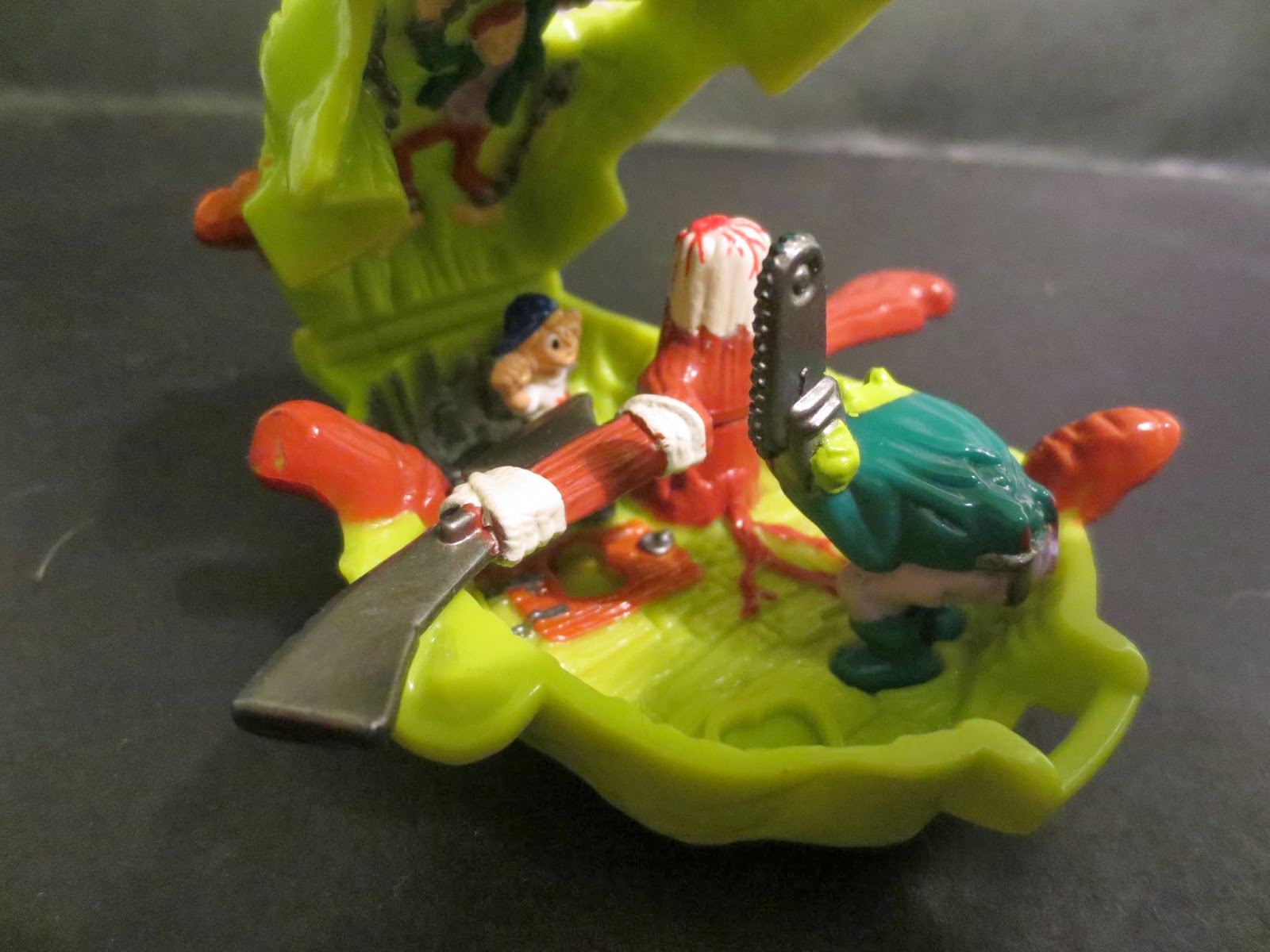 Storing the set is pretty easy as long: Ax-Man fits in his footprint, the swinging blade needs to be somewhere between the 7 and 9 o'clock positions on the case's face, and Max needs to be in the footprint that's near the metal junk nearest the back wall. If he's anywhere else he'll get knocked loose by the blase as it moved. 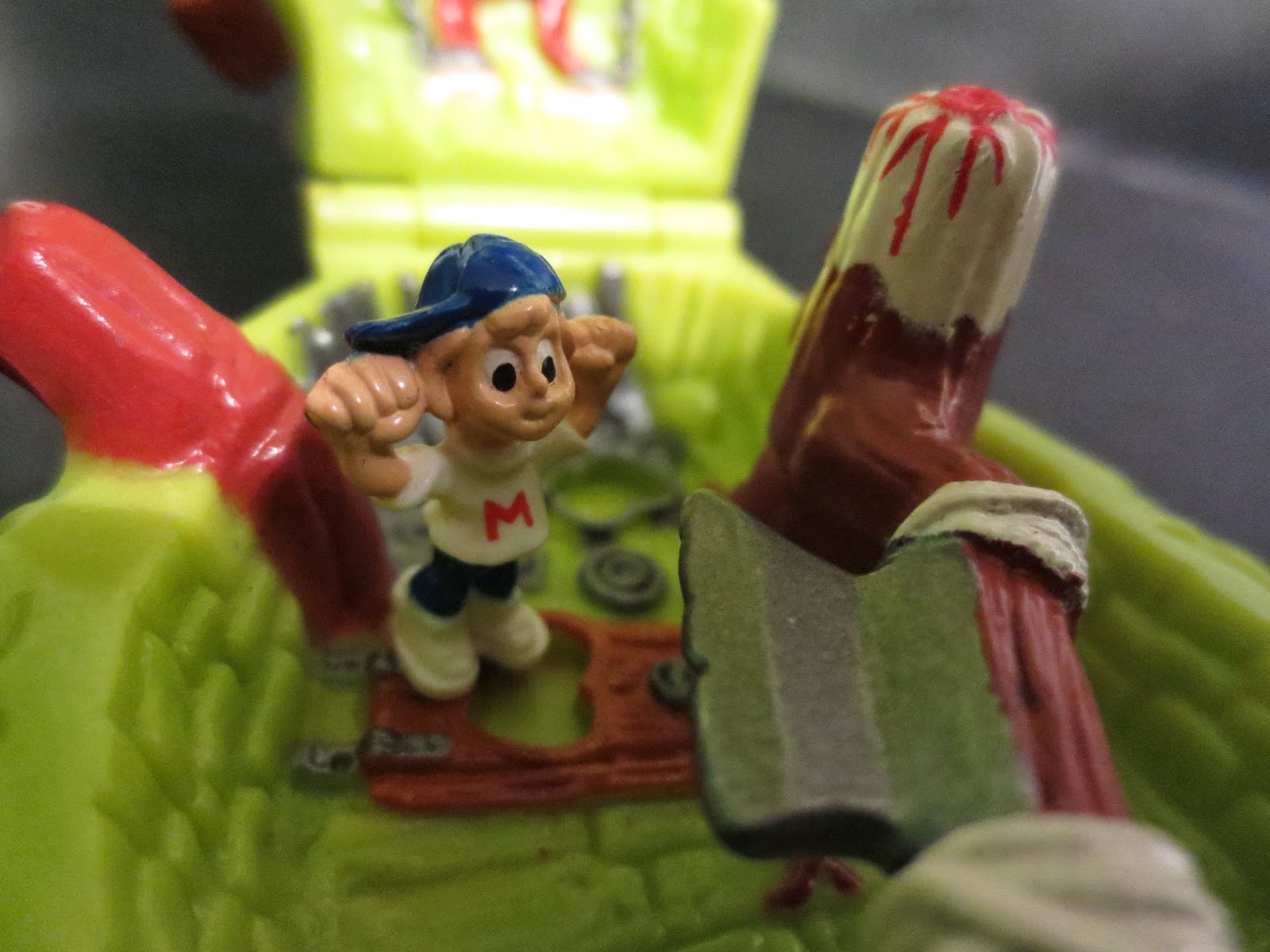 I like this set, but I don't like it as much as other series two sets like Lockjaw or Corpus. The exterior face is cool and Ax-Man is a great mini, but the base isn't as exciting or unique as those other sets. I like the spinning blade trap, but that's about all the interior has to offer. Overall, I'd give this set a Good and a 1/2. It's not too difficult too find, but it does cost a bit more than most of the series one sets. Check it out if you're looking for more cool sets, but it's not on the upper tier of the Mighty Max pantheon. Maybe if Ax-Man had been wielding a guitar and this were an evil rock concert. Actually, that's a darn good idea for a set. Darn good indeed.
Posted by Barbecue17 at 11/23/2014