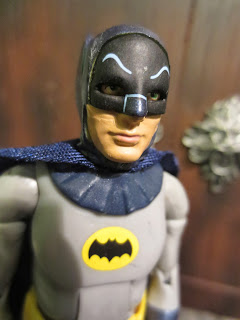 While we recently gave away one of these guys free in our Epic Grab Bag Contest, I still hadn't reviewed mine yet. I think it's safe to say that the Adam West Batman from the 1966 TV show is one of the most popular action figures of 2013. Everyone seems to have bought him. Really, other than the Family Guy figure (which I own) or one of vintage Mego products, this is pretty much your first chance to get an Adam West action figure so it's understandable why fans went nuts. I'm a big fan of the 1966 TV series (heck, I'm even a member of the Yvonne Craig Fan Club) so I was thrilled when the floodgates opened and merchandise from the series poured forth. I originally planned on being an ultra completest with this line...but then I bought this figure. Looking at most people's reviews I'm thinking I must be in the minority, but I'll just go out and say that I think this might be the most disappointing action figure of the year for me. Ready to hear me rant and rave? Well, follow me past the break and the ranting and raving will begin... 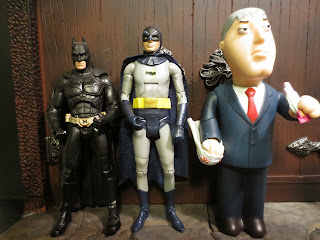 Batman's about 6 1/8th inches tall which puts him more in scale with Mattel's Movie Masters figures rather than their DC Universe Classics or Club Infinite Earths line. That's probably a good move as I imagine that most of us were hoping to someday have a whole shelf of film Batman figures. Of course, now Mattel is putting out their Michael Keaton Batman figure in the 4 inch scale while their Christian Bale Batman is in the 6 inch scale. No wonder people collect Hot Toys. Anyways, this figure is designed to replicate the live action appearance of the television show which had a slightly animated appearance in it's design which has translated well. 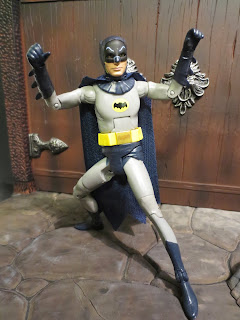 Batman features articulation pretty similar to most Movie Masters or DCUC figures: hinged ankles, hinged knees, swivel thighs, H-hinged hips, a swivel waist, an abdomen- hinge, peg/hinge shoulders, bicep swivels, hinged elbows, swivel wrists, and a ball jointed head. Where to start? Well, there is a lot of articulation and most of it is pretty functional. You'll be able to get Batman into plenty of fighting poses so you can make him "Pow", "Thwack", and "Splotch" to your hearts content. Two of the joints gave me trouble, however, one by not adding much and the other by not working. First is the ab-hinge. It's extremely limited in it's movement and it really, really kills the sculpt. The figure is just too thing for this joint to work properly. A ball jointed ab closer to Hasbro's G3 G.I. Joes or Star Wars Black would have been a much better choice both for form and function. Secondly, the ball jointed head barely moves. It feels like more of a loose swivel joint than a functioning ball joint. I think the articulation here also really makes the figure look gangly and awkward, much more so than it needs to. 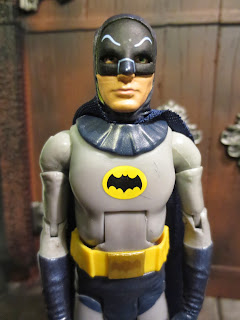 That provides me a segue into talking about the sculpt, which I think is largely a mess. I'll give the one concession that the head sculpt looks pretty good; it's a great likeness of West in the cowl. Now where to go from there? Listen, I love Batman. Pretty much all of Batman, really. About the only Batman stuff I don't care for are the two Schumacher films and the graphic novel Batman: Fortunate Son. Typically I can embrace the sillier, more kid friendly aspects of the Batman mythos right alongside of the more serious and weighty stuff. I love the colorful, giddy, and often nonsensical playfulness of the 1966 series but I think something about that was lost in the translation of Adam West's portrayal of Batman into plastic form by Mattel. This isn't a campy figure, it's a poorly designed one. It wants to add a little bit of Adam West's paunch, but it also wants to present him as skinny and gangly. I know we're accustomed to seeing super-heroic proportions on comic inspired figures, but I'm not sure this figure really looks anything like West in the series.Considering Mattel tooled these figures specifically for this line (they don't reuse parts from DCUC like many other DC lines) I really was hoping they would have done a better job of melding a solid sculpt with the articulation. Soft details, joints that don't match up right, and gangly, awkward proportions make this figure laughable, and not in a good way. 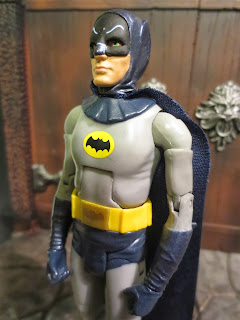 The paint isn't much better. While the face looks good (the paint around the eyes and the "eyebrows" is excellent) the body is dull and has lots of errant paint marks all over it. My figure has some particularly egregious paint scrapes on the chest right near the bat signal which is stamped on, but not evenly centered. I think the shape is off a bit too, as it should be a bit longer and thinner than it is depicted here. I do like how Mattel did attempt to give the blue suit highlights (gloves, boots, briefs) a shiny texture to replicate their look on the show. It is a nice little detail. 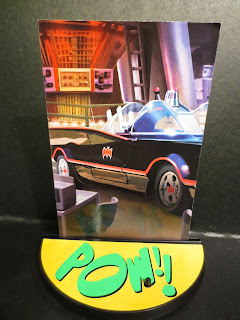 While I wish Batman came with an accessory (serious, the man has no shortage of wonderful toys) he does come with a stand and a cardboard backer/ miniposter that can fit into a slot on the stand. The stand works great and has a cool yellow and green "Pow!!"sticker applied to it. The card is made of a thick, sturdy cardboard with one side depicting part of the batcave and a third of the Batmobile and the other depicting a nice image of Batman and Robin in the Batmobile. While it isn't removable, I will mention that Batman does have a soft goods cape. I think it looks better than a plastic cape could look and also allows Batman to sit in the upcoming Batmobile. Stands are always welcome, so I appreciate the effort. 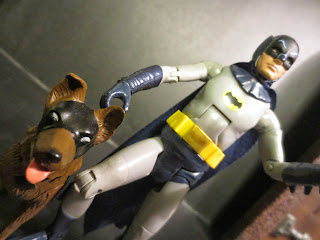 Ultimately, while the figure has few real quality control issues, I still just don't think it's a good representation of Adam West as Batman nor is it a good action figure. I'm giving poor Bats here an Eh rating, meaning that unless you are absolutely obsessed with the 1966 Batman series and just have to have a figure of West a Batman, just leave this guy alone. The only reason I bought it was I figures if I didn't have an Adam West Batman on my giant shelves of Batman figures, someday I might regret it. This guy pretty much killed my enthusiasm for the line, though, and unless I find these guys severely discounted or Mattel gets smart and releases a Yvonne Craig Batgirl, this will probably be the last figure in this series I buy. I actually might pickup the NECA 18 inch figure as it seems to be a much better product and a better representation of the character. I realize that I seem to be in the minority here, but I just can't get myself to like this toy. 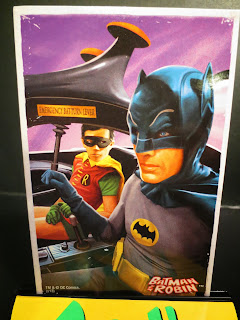