Action Figure Review: Glimmer from Masters of the Universe Classics by Mattel 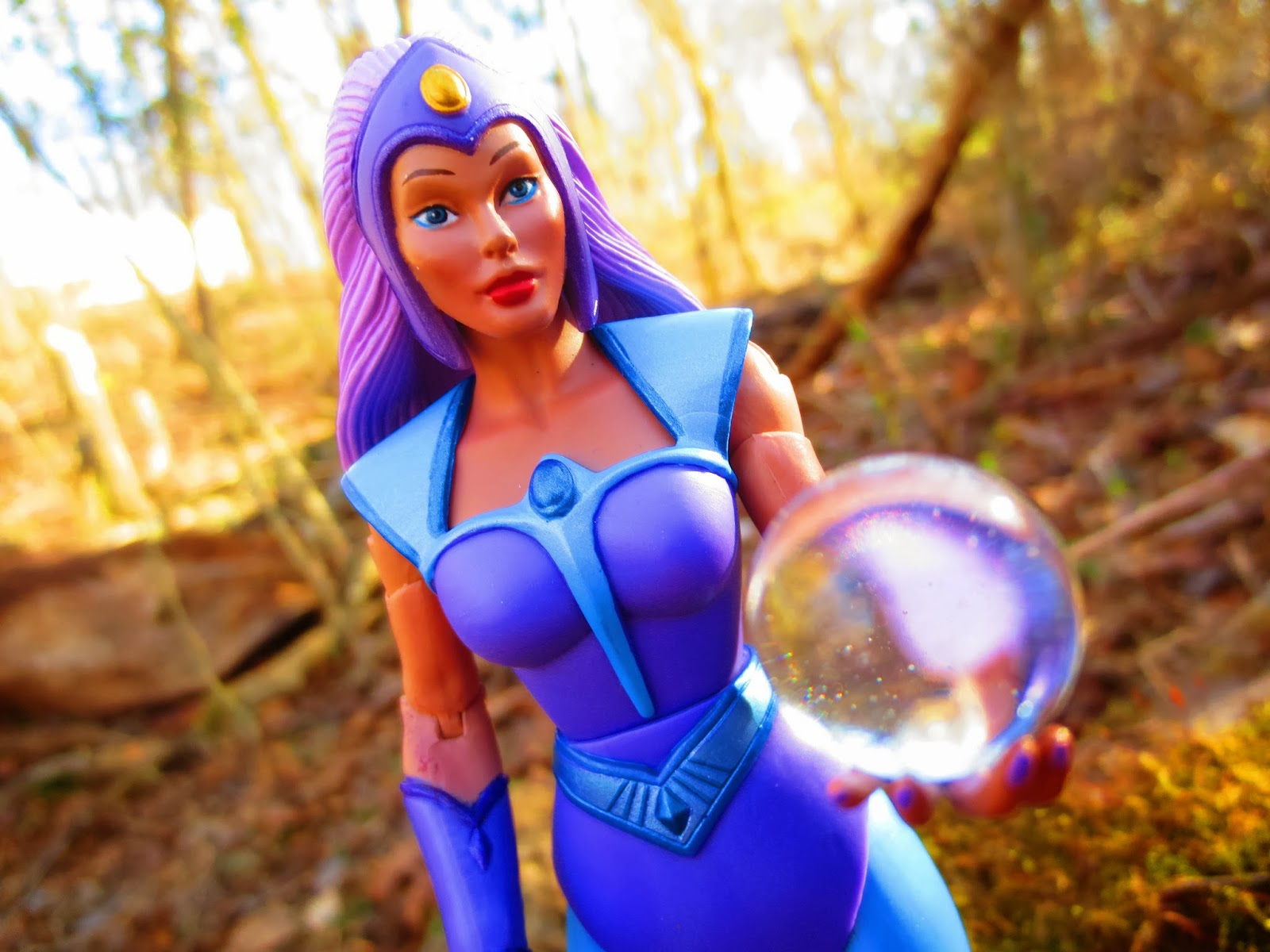 Masters of the Universe Classics has been cranking out figures since SDCC 2008. That's over five years! Five years of monthly action figures (sometimes more than monthly!) and we're just now getting Glimmer. It's about darn time! Glimmer, "The Guide Who Lights the Way," was one of the characters from the first series of She-Ra: Princess of Power action figures released in 1985 and was a prominent character on the Filmation animated series, appearing in 45 episodes. Honestly, I'm pretty sure she was the leader of the Great Rebellion until She-Ra/ Adora showed up, so her absence in this line for over five years would kind of be like Mattel not having released Man-at-Arms for half of a decade. I know I'm glad to finally have her in the line and I'm sure plenty of other Princess of Power fans are, too. Glimmer's the daughter of Queen Angella, the Queen of Brightmoon (another figure we desperately need in the line), and is gifted with a vast array of ill-defined powers that somehow involve the ability to utilize light. Ready for a review of Glimmer? Then join me after the break... 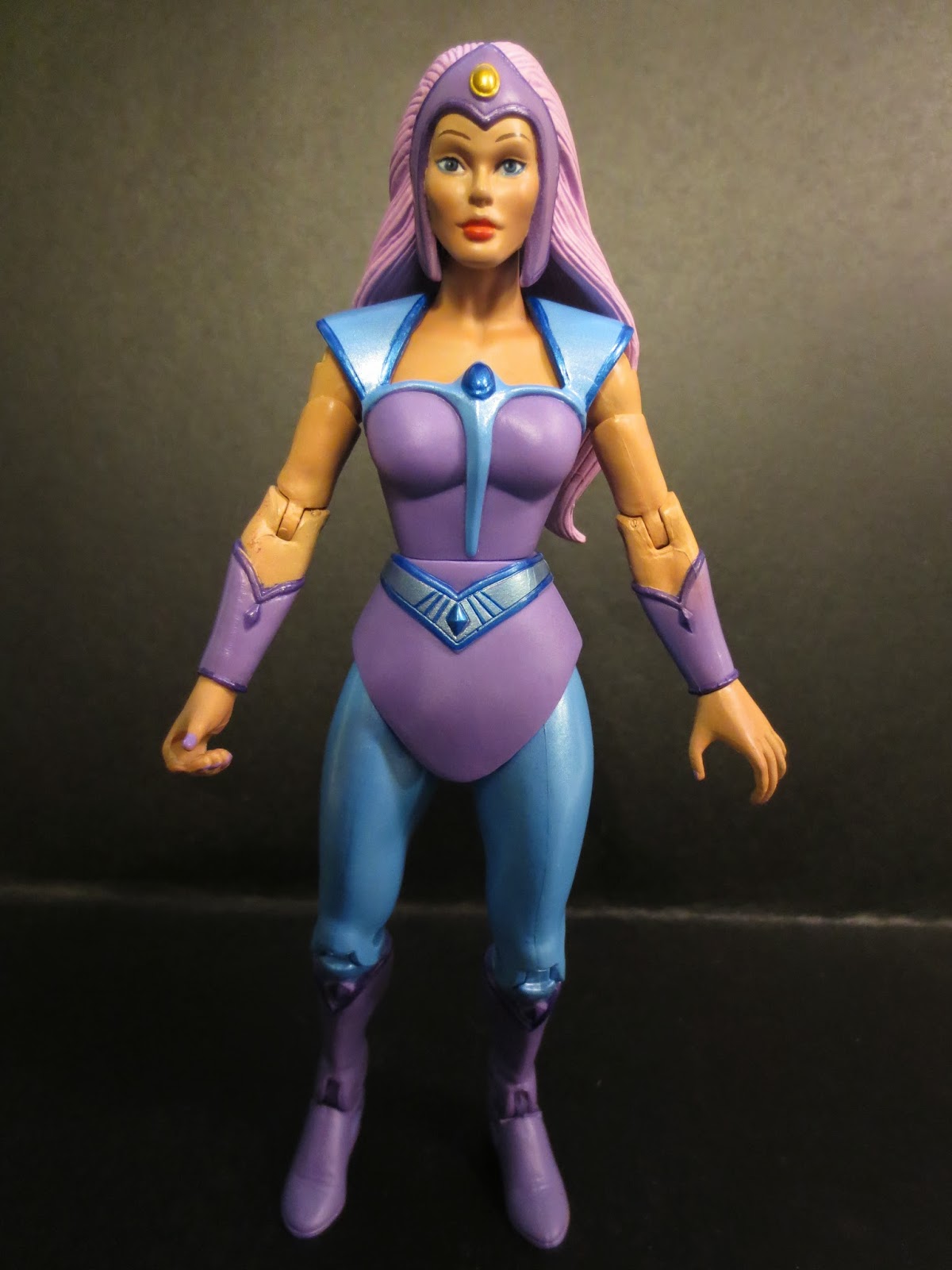 While she appeared in the vintage Princess of Power toyline, Glimmer's style is based off her appearance in the Filmation cartoon (where she was voiced by Linda Gary). Like most other ladies in the line, Glimmer stands 7 1/4 inches tall and features some shared parts (feet, thighs, torso, and arms). While she has the look of the Filmation Glimmer, her appearance is not overly animated, so she should fit in great with any MOTUC collection (as long as your collection isn't all dudes). 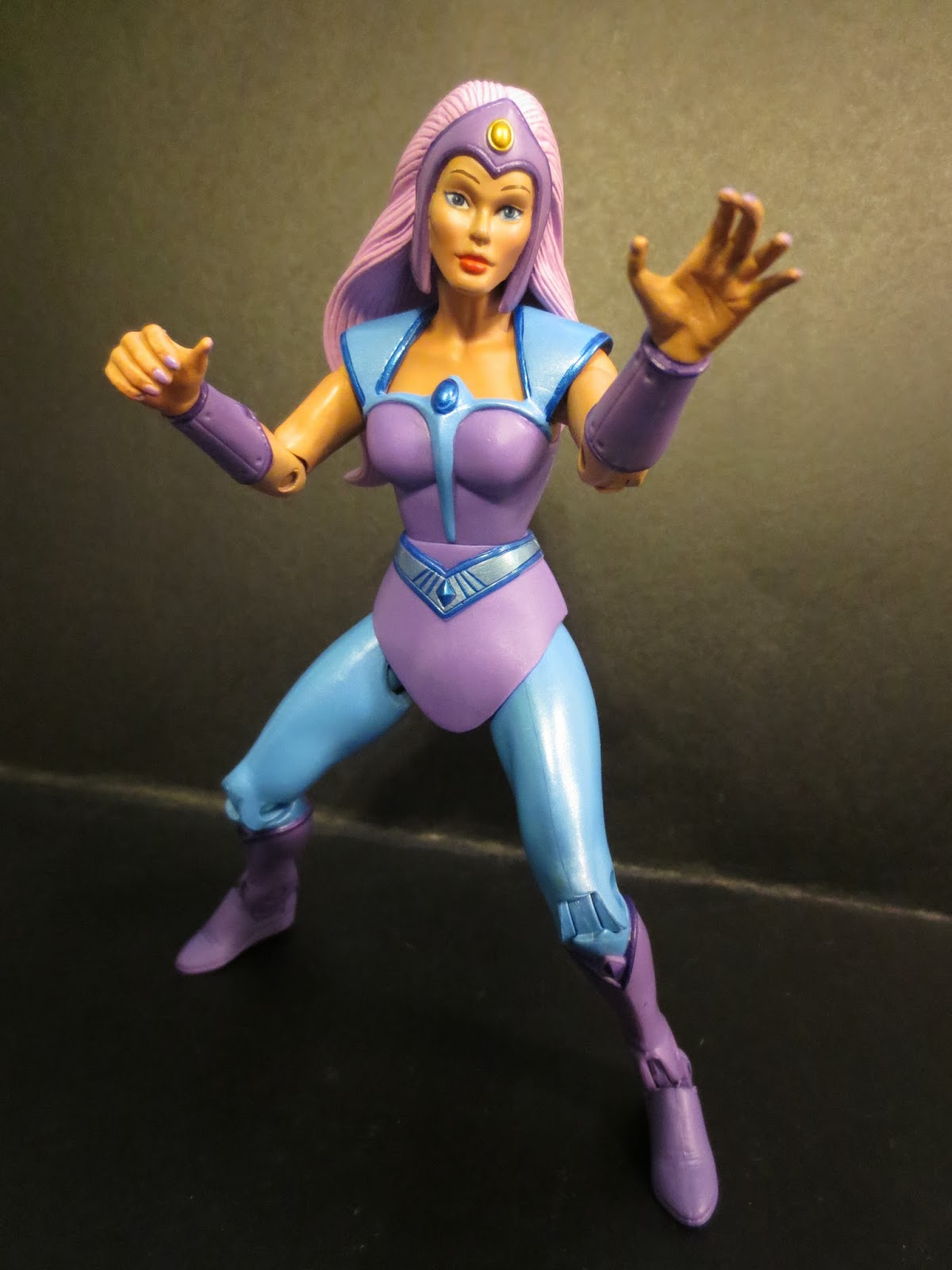 For well over a year now I have had no major quality control issues on any MOTUC figures. Mattel has really got that aspect of the line under control, meaning that Glimmer is another sturdy figure with solid articulation. She features: true rocker ankles, hinged ankles, hinged knees, swivel thighs, swivel/hinge hips, a swivel waist, swivel/hinge shoulders, swivel biceps, hinged elbows, swivel wrists, and a true ball jointed head. I love that Glimmer has both the true rocker ankle hinges (like the Star Sisters and Teela) and a swivel waist. You can get her in some truly excellent poses with nothing to hinder her. While she has long hair, it's very well designed so that it doesn't significantly impede her head motion, either. She's really quite spectacular! 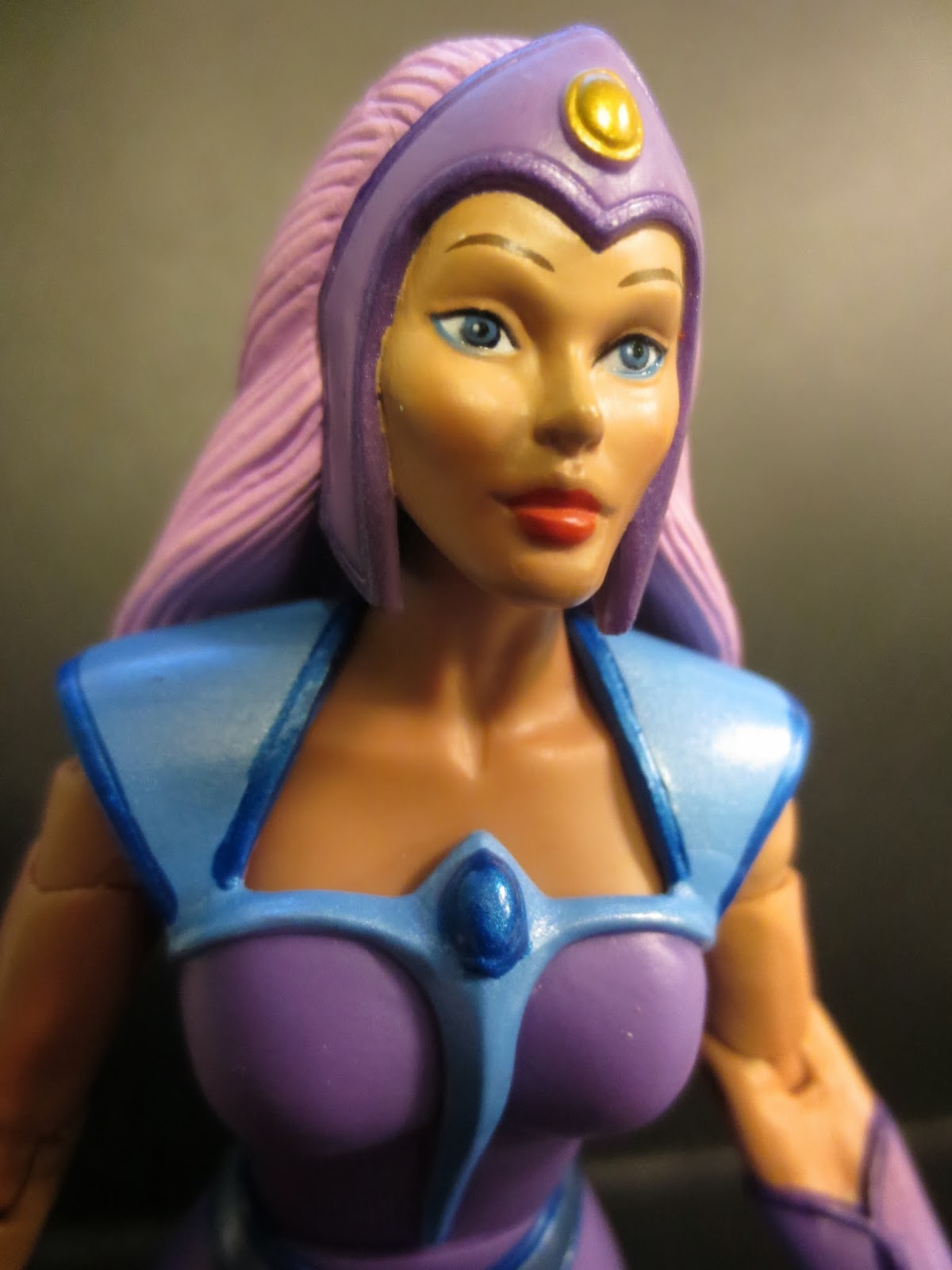 Every piece of Glimmer's outfit is unique to her; her bracers, boots, and outfit are all new and they look fantastic. Glimmer is a great example of taking the more simplified character designs and adding in just enough detail to make them interesting when viewed as a three dimensional action figure. I love the diamond motif that has been worked into the top cuffs of her boots and onto her bracers. It's a simple but effective way of making her standout from the rest of the POP girls. I love Glimmer's headsculpt, too. She's quite pretty with a very serene expression and long, gorgeous hair. Of course, there is one aspect of Glimmer that has caused many collectors to complain and that's her skirt. It shouldn't be a skirt, it should be more of a leotard like bodysuit, but apparently Mattel has claimed that particular style of clothing is impossible to manufacture (although they've done it in other lines and plenty of manufactures have done it). It looks OK as a skirt, but just know that that it's not what it's supposed to be.

As long as you don't mind Glimmer's pastel color pallet (I don't know Lisa Frank, but I imagine this is what she looks like) than you'll be happy with the way she turned out. For the most part, she turned out really nicely with vibrant colors and neat paintwork. I love the almost pearlescent blue that's used for her tights; it has a great shiny look to it. Her face is well done (the eyes are great) and her bright pink hair has a nice light wash that brings out some of the detail and tones the color down a bit. There aren't a ton of fine details, but little elements like the diamonds on her boots, bracers, and belt are neat and clean. The only messy spots I've noticed are the gem on her chest and the metallic blue stripes on her shoulders. They're a bit rough. Oh, and like most of the other Princess of Power girls, Glimmer has painted nails. Hers are purple. Sassy! 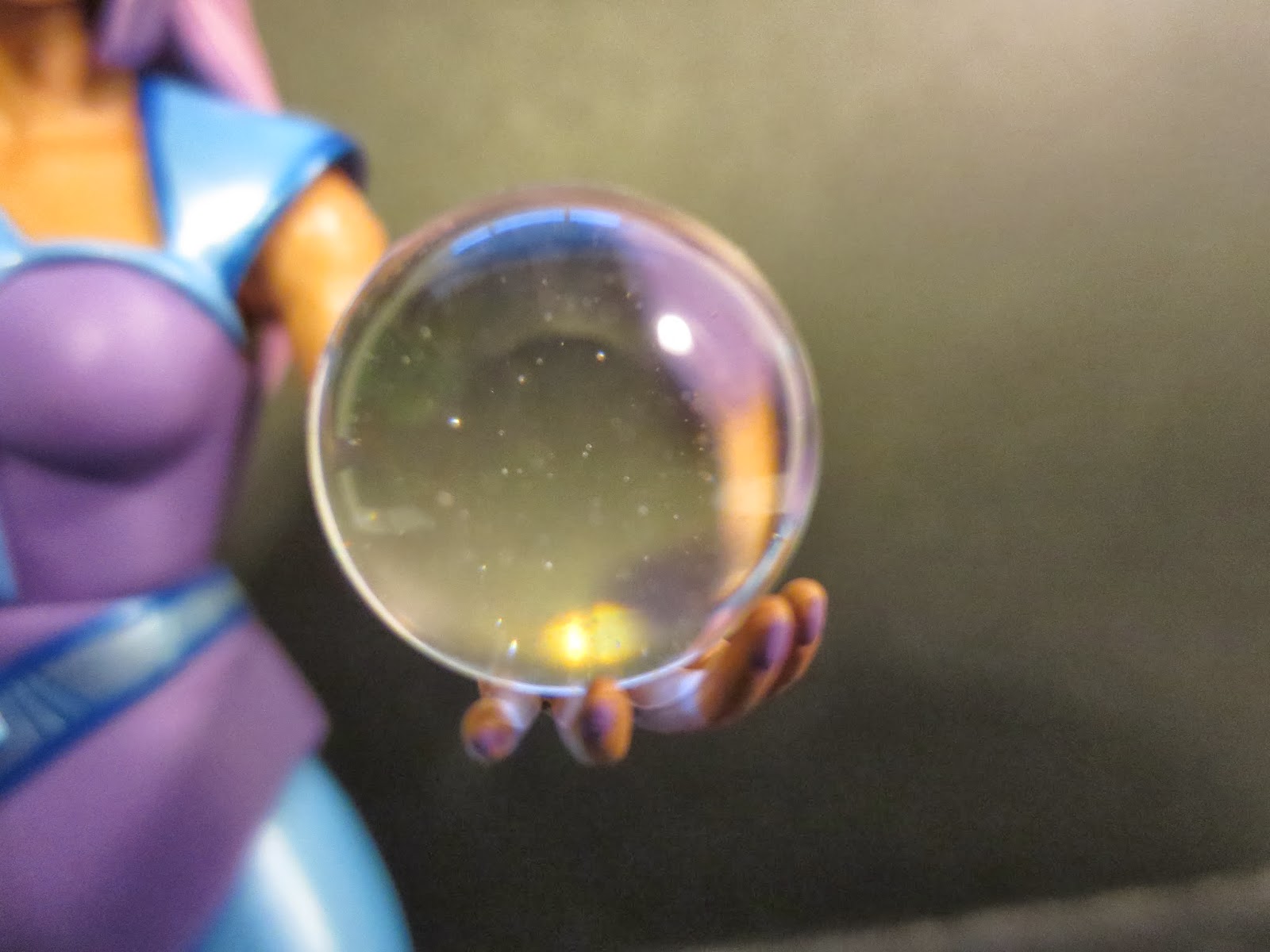 Glimmer comes with two accessories: her magical staff and the Moonstone. The Moonstone is an accessory from the Filmation cartoon and is simply a clear plastic orb that can rest in Glimmer's open left hand. 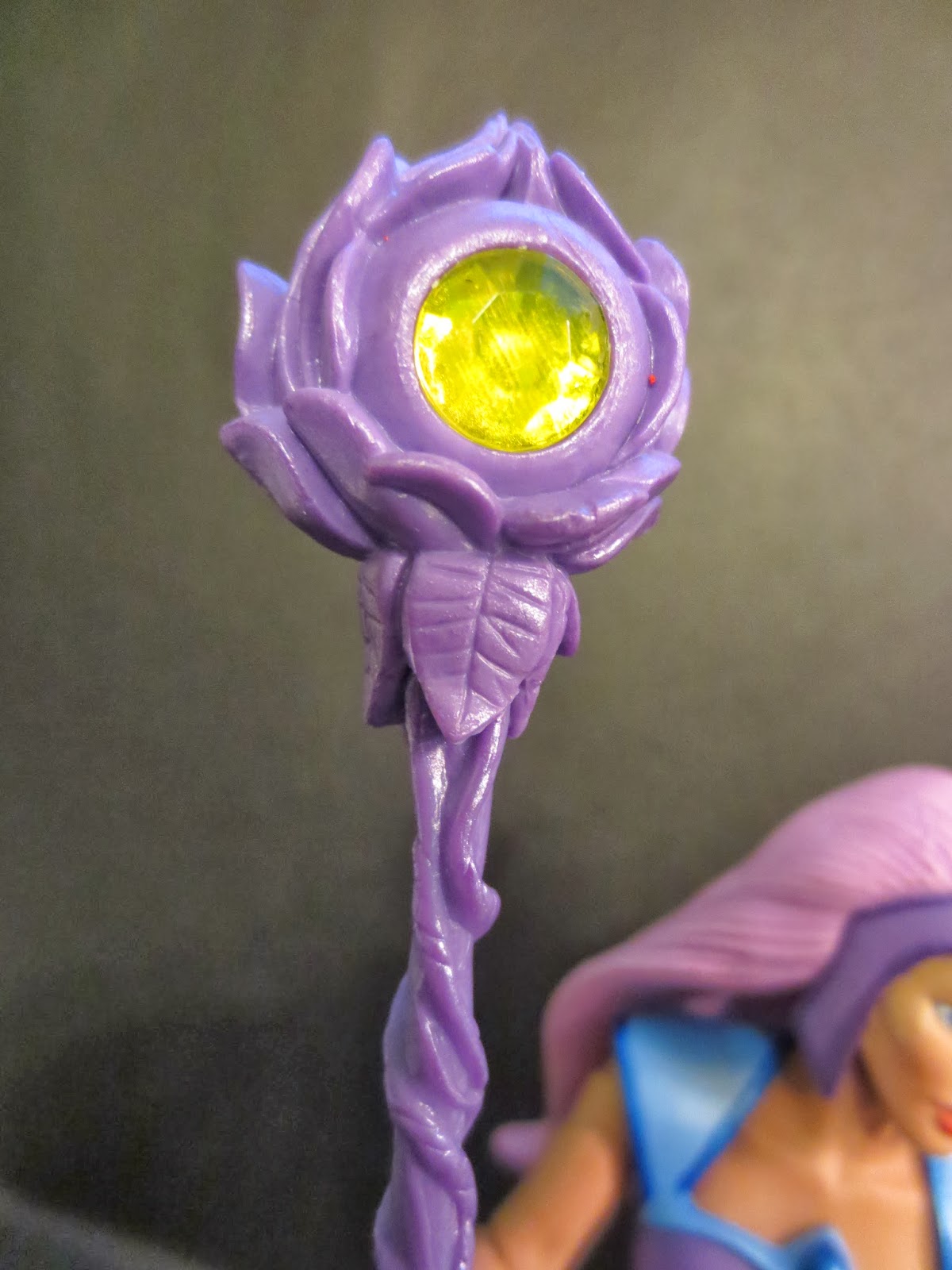 The staff is a bit more detailed; it's based off of the accessory included with the vintage Glimmer figure and has a wonderful sculpt. The staff is sculpted to look like a flower with a stem. The leaves are very detailed and, of course, there is a yellow gem on the headpiece. It's not intended to be a real flower, though, so it's metallic purple to better match Glimmer's outfit. I'm a little disappointed that Glimmer did not include any glow in the dark accessory (glowing in the dark is kind of herthing) nor a shield like the rest of the POP gals. I know the vintage figure didn't come with one, but neither did the vintage Castaspella or Frosta. 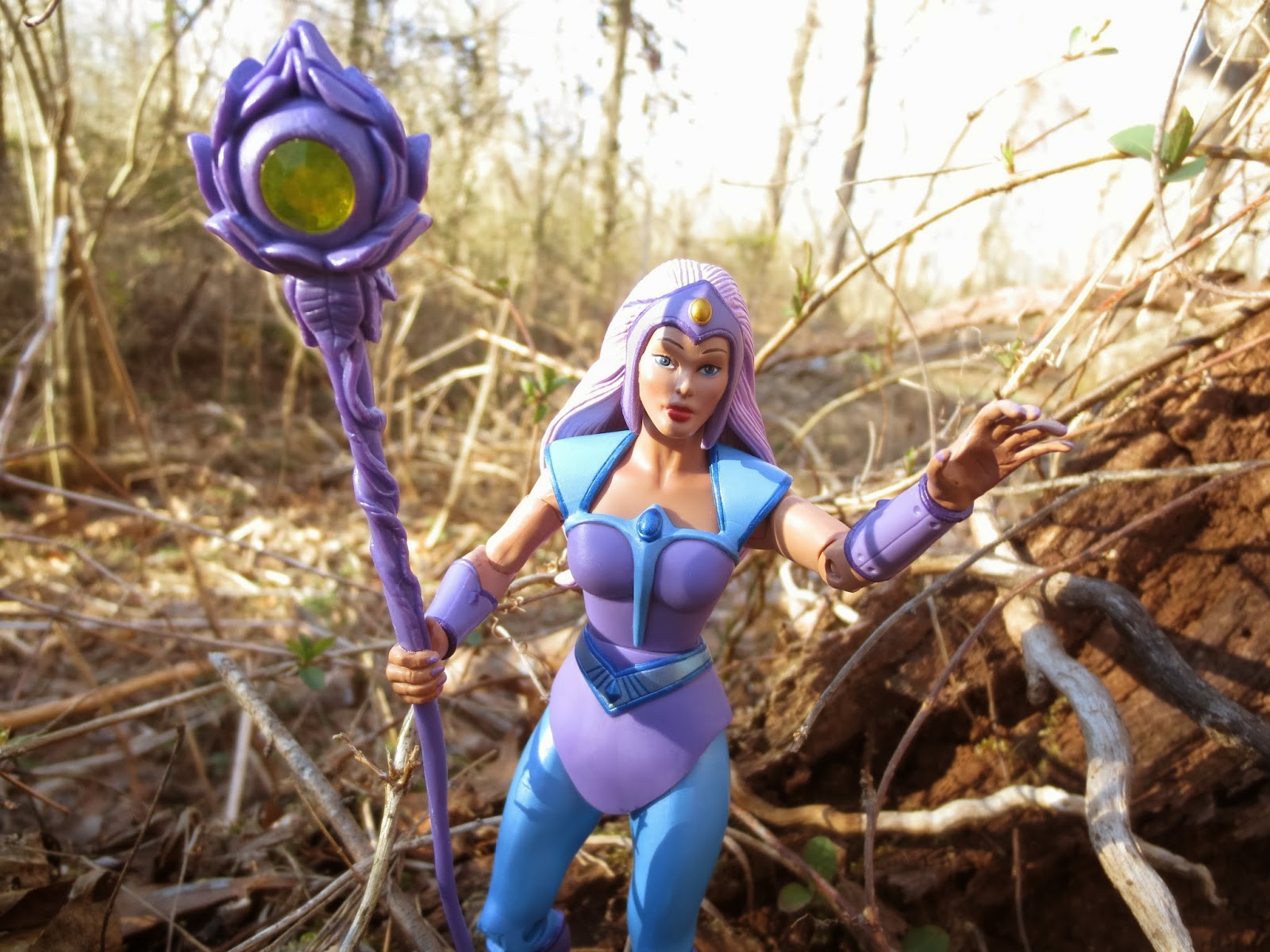 I'm really glad to finally have Glimmer. She's not 100% perfect (the whole skirt thing is still weird and her accessories are a bit lacking) but she's definitely not a bad toy. Glimmer is the kind of action figure that I think won't appeal to just anyone, but will definitely appeal to Princess of Power fans and Masters of the Universe fans who know the character from either the vintage toyline or the cartoon. Overall, Glimmer gets a Good and a 1/2 from me. She's an exciting character and an important part of the story for fans who know her, but for your average joe just checking out the crazy designs MOTUC offers, I don't think she really stands out that much. Still, she does look darn fine when paired together with the (finally) growing ranks of the Great Rebellion! 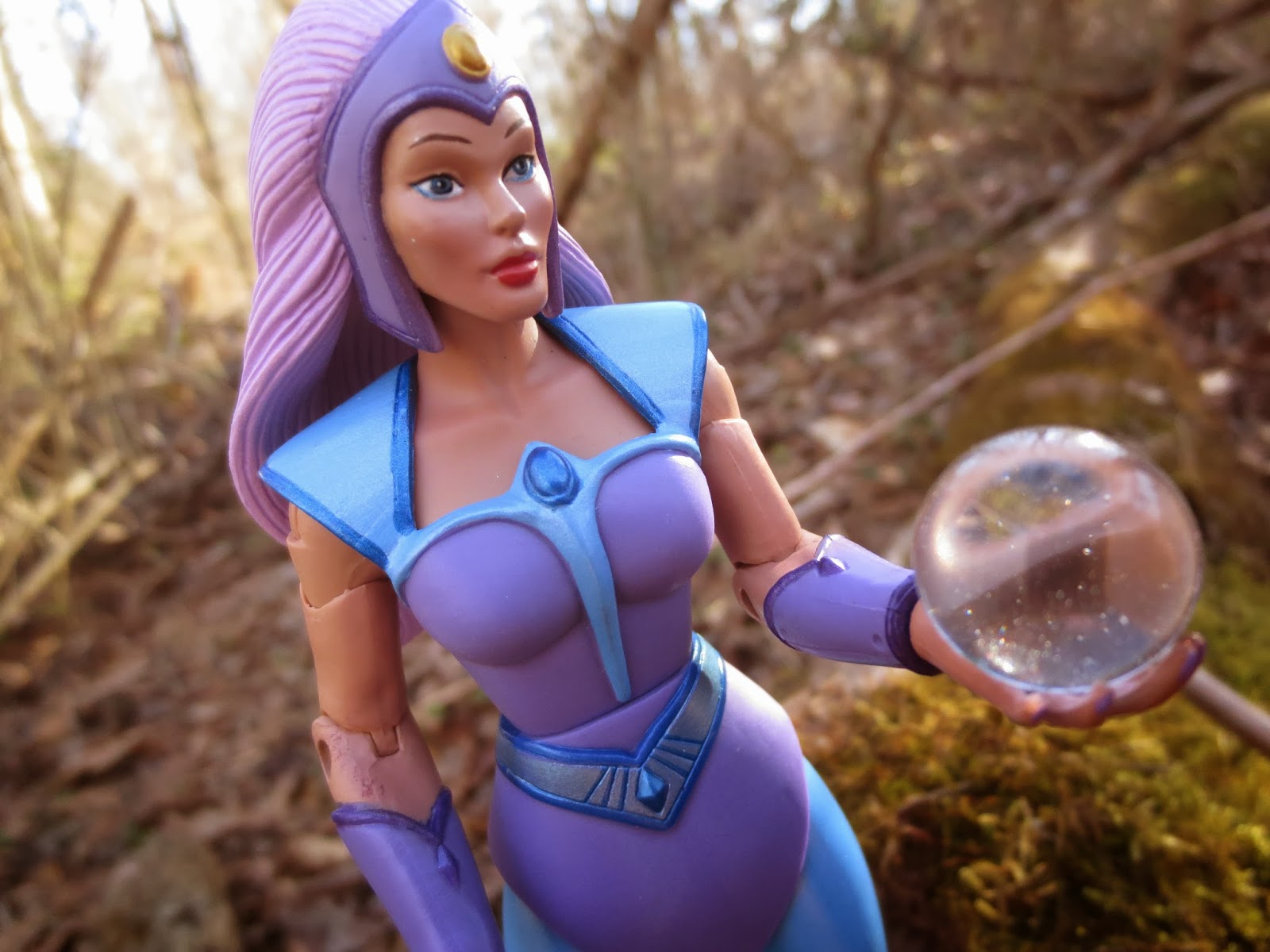