Action Figure Review: Mantenna from Masters of the Universe Classics by Mattel

Oh Mantenna, what's not to love about you? You alternate between being creepy and endearing, you've had some great action figures made in your likeness, you're an original member of the Horde, and you are always getting dropped down trap doors by Hordak. Yes, while Mantenna looked like the fiercest of the fierce in the vintage Masters of the Universe toyline, The Filmation cartoon turned him into somewhat of a lovable loser. Now that Mattel has released Mantenna as the delayed September 2013 Club Eternia action figure, fans are closer to completing their core Horde roster (c'mon Modulok!) which is always a nice thing for action figure collectors. Modulok is a figure that I'm sure that many fans speculated on the execution of in Masters of the Universe Classics so it's great to see that Mattel really did a trop notch job. This is an excellent figure and since he's a creepy ant monster, he certainly has a place in our 31 Days of Toy Terror. ready for a look at him? Then stand over there while I pull this lever and I'll see you after the break... 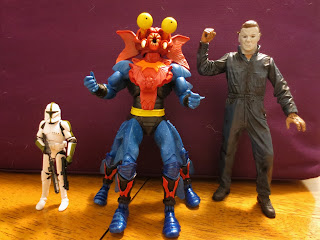 Mantenna is right around 7 inches tall, just like most other figures in the MOTUC line. While most MOTUC figures share multiple body parts with each other, Mantenna is completely unique with the possible exception of his hands. I'm out of town while writing this so I don't have any other figures to compare it too, but the hands look familiar. Still, I'm pleased that Mattel went all out with Mantenna. While the figure is largely based off of the look of the vintage toy, there are a few nods to the Filmation appearance such as the yellow eyes and the separated legs.

Mantenna features a ton of articulation since he includes two extra legs. He has: 4x full lateral ankle rockers, 4x ankle hinges, 4x boot swivels, 4x ball jointed knees, 4x swivel thighs, 4x ball jointed hips, a swivel waist, an ab hinge, ball jointed shoulders, swivel biceps, hinged elbows, swivel wrists, and a ball jointed head. All of the joints are nice and tight with no QC issues that I can detect. Notice that the rocker ankles are fully articulated- they're actually hinged and give Mantenna quite a bit of flexibility when standing on all four of his legs. This guy is incredibly impressive articulation wise. 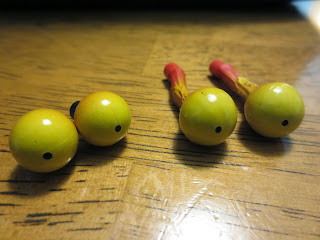 While most MOTUC figures don't contain an "action feature" per say, some of them do contain features that replicate their vintage action feature. Mantenna includes two sets of eyeballs, regular and extended, that replicate his vintage action feature of eyeballs that popped out from his head. The eye balls have little pegs on the end that pop right into his eye sockets. They stay in nice and tight and while the front of Mantenna's face (his mouth, actually) is removable to aid you in inserting and removing the eyes, I'd say just don't bother with removing it. It's held on by a rubbery peg that I'm suspicious of and considering the eyes can be removed and inserted without removing the mouth, why bother? It's a great feature, though, and the eyes are pretty cool. I do miss the bloodshot veins on them, however, which the vintage toy had. Still, the yellow looks equally jarring. 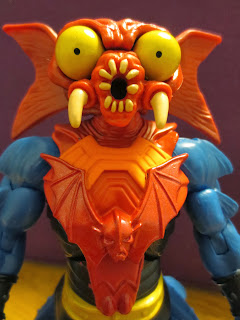 Since Mantenna is an entirely new figure, the sculpting is all new. First, I'll mention the headsculpt as it's excellent. Mantenna is really terrifying. The individual teeth, the visible exoskeleton spine that extends down his back, the weird eye sockets and textured ears-it's all just amazing. Try removing the eyes- I think it makes Mantenna look even more terrifying!  The body sculpt shows off all of Mantenna's weird armor (some of which may be organic) and also depicts the Horde emblem he wears emblazoned on his chest. The legs are covered with a bumpy texture and lots of fins (do ants have fins? that give Mantenna a unique look. Everything just ties together so well with this figure from the top of the head to the armored boots each individually emblazoned with the Horde logo. Exceptional work! 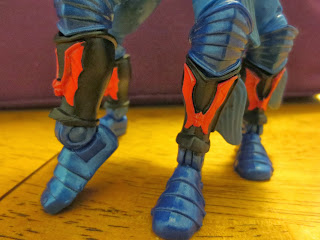 The paint scheme works well. Mantenna uses primary colors with black mixed in to give him a look that would initially seem rather toyish, but the reds and blues have been darkened (or in the case of the boots, given a metallic shine) to really complement the monstrous nature of the character. There are a few rough spots such as the yellow "belt" and some splatter on Mantenna's chest but otherwise, I'm quite pleased with how things turned out. 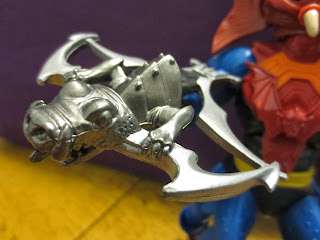 I'm considering Mantenna's extra eyeballs as accessories but since I've covered them above, I'll only mention his crossbow. It's a dark gray metallic crossbow, similar to the other Horde members. I love the sculpt although I'm a bit disappointed that there aren't any additional paint apps on the crossbow. Usually some of the little details like the switch on the back of the bow and the bolt itself are given a few details. I guess all of the details and extra legs on Mantenna took up the budget. 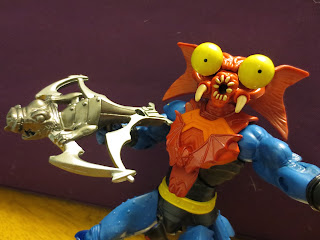 I really, really like Mantenna and absolutely am impressed by how well he turned out. I'm not sure there's any other way to rate this figure but confirming him as Epic. While I had some minor nitpicks, the guys just perfectly nails everything fans could have hoped for in a Mantenna figure. The sculpt is excellent and definitely stands beside the best work we've seen from other companies this year. He's a really interactive figure and the fact that you can essentially change his appearance with the swappable eyes gives him more display options, always a good thing. Mantenna definitely is near the top of my list for this year and has helped to make October, with Lord Dactus and the Horde Troopers, a very good month. Great job, Mantenna! Now go stand over there....
Posted by Barbecue17 at 11/22/2014