Action Figure Revew: Two Bad from Masters of the Universe Classics by Mattel 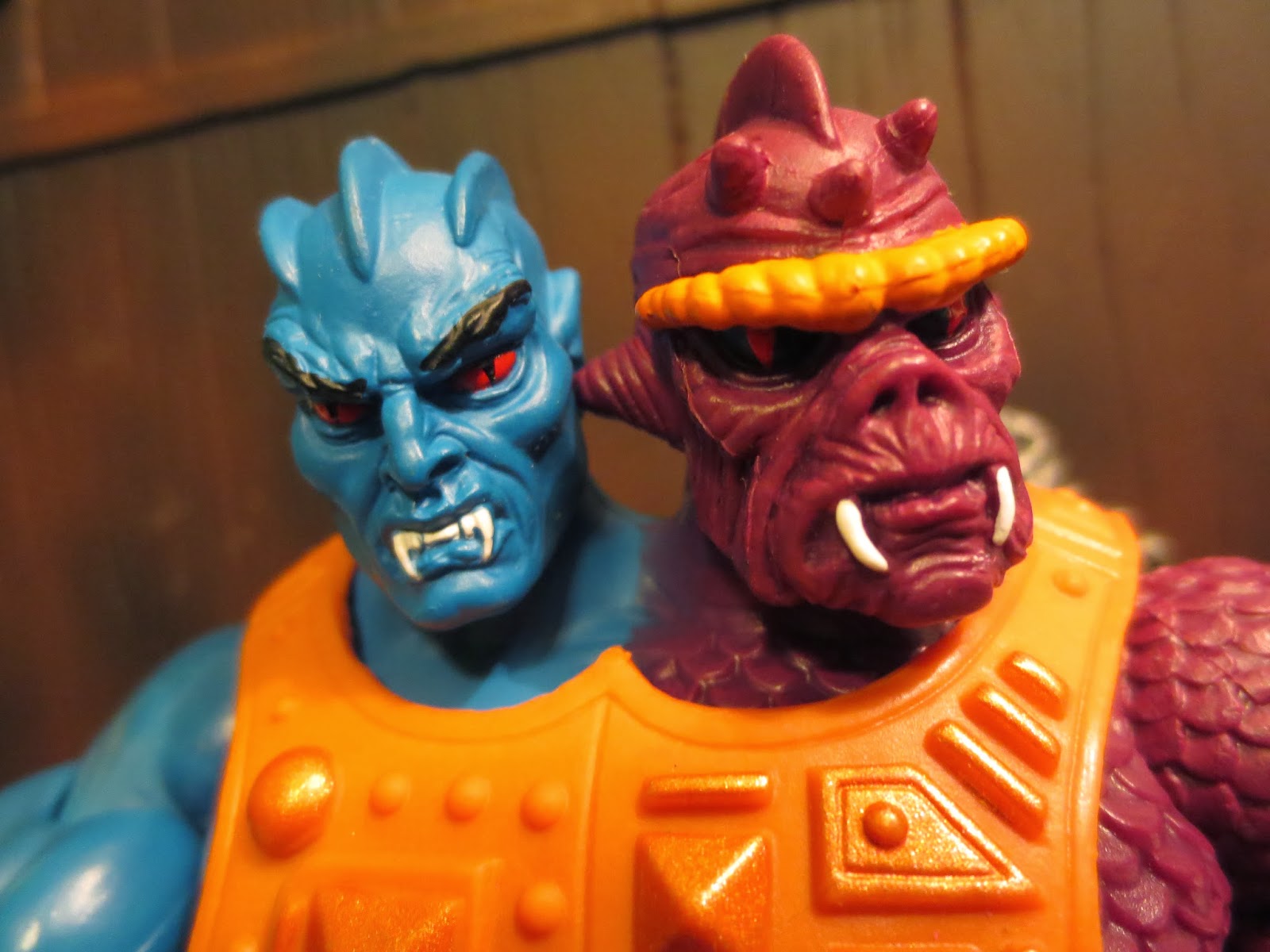 Together with next month's release of Modulok, Two Bad lets us complete all of the figures from 1985, the fourth year of the vintage Masters of the Universe toyline. Being both one of Skeletor's evil minions and a fairly unique figure, Two Bad has lone been a fan favorite. He received an updated figure and a refined origin during the 200x era and is finally getting his due in MOTUC. As the first figure of 2014 Two-Bad definitely fills gaps and features some impressive unique elements, but he's also hit with a few little bumps that keep him from true greatness. Ready for a look at Skeletor's "Double Headed Evil Strategist"? Then join me after the break... 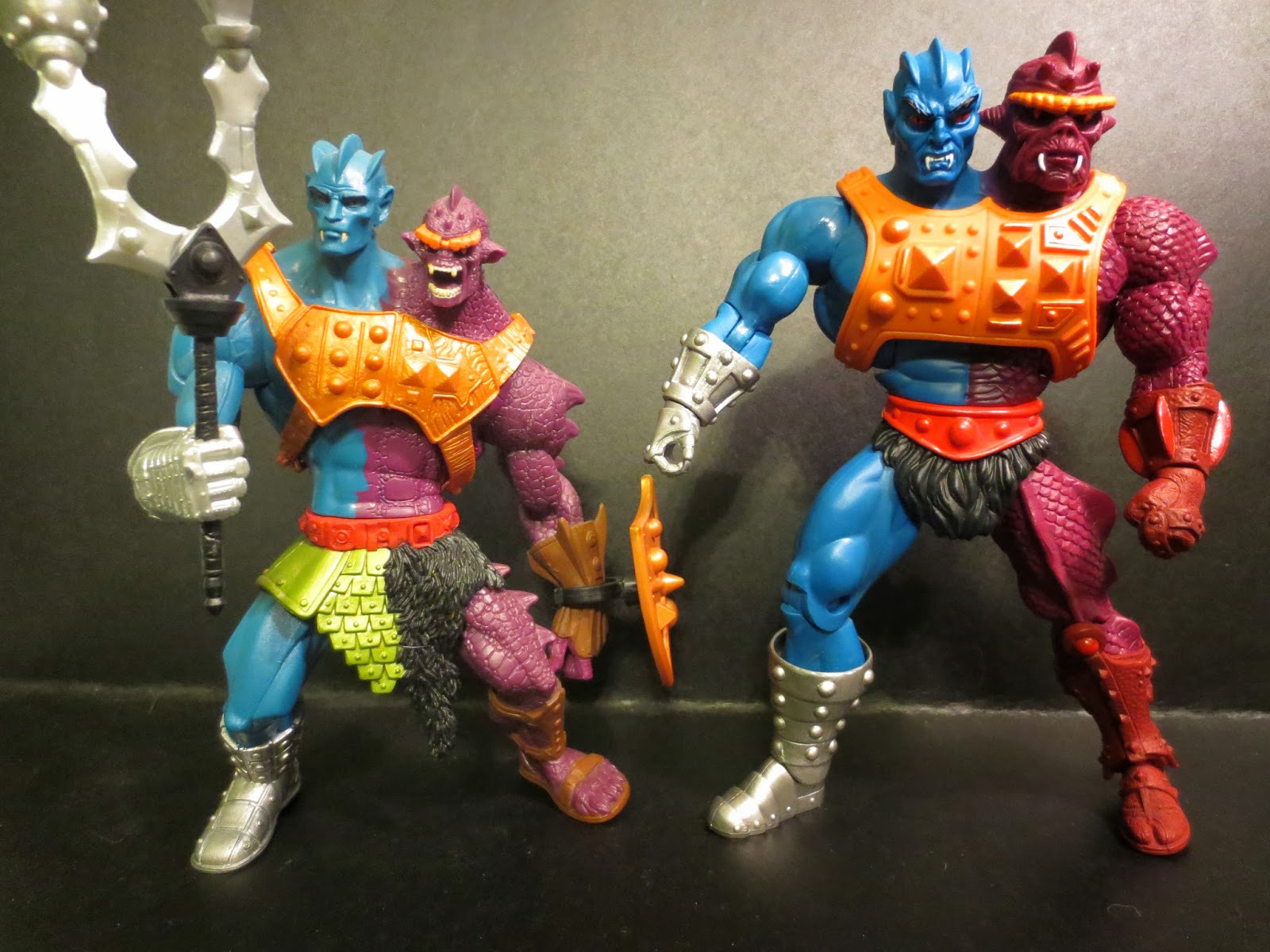 Like most MOTUC figures, Two Bad is heavily inspired by his vintage figure. Other than his mace and maybe the detail on his right boot, I'm not noticing much 200x influence here. I'm also not noticing much parts reuse, though; this guy seems to be almost entirely new. The only parts that seem to be reused are his loincloth, right thigh, and right bicep and shoulder. He definitely stands out on your shelf as a unique looking villain. 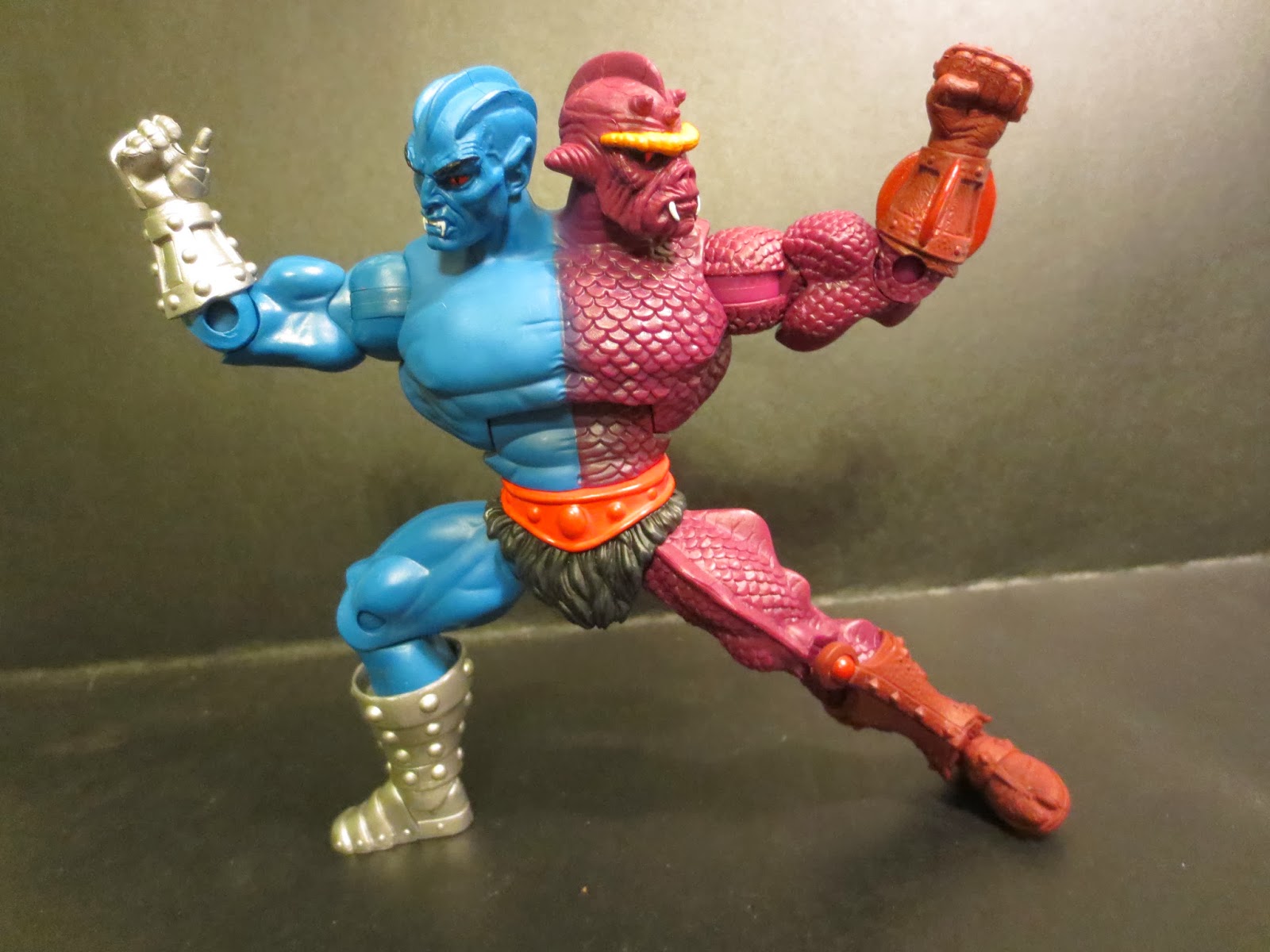 Two Bad features the same great articulation as most other MOTUC figures, although he gets one extra joint due to his having two heads. Two Bad has: hinged ankles, boot swivels, hinged knees, swivel thighs, swivel/ hinge hips, a swivel waist, a hinged abdomen, swivel/ hinge shoulders, swivel biceps, hinged elbows, swivel wrists, and ball jointed necks.  Everything is tight, solid, and free of defects; you should have no issues getting Two Bad into plenty of unique poses. The only issue I noticed was that his heads really don't have much range of motion. They're very stiff and also much closer together than we've ever seen them in any previous incarnations of the character. I'm not sure if Mattel has some sort of size limitation for the torso but there's little to no space between their heads. This doesn't bother be, but I will point out that unlike the vintage figure, Two Bad's arms are not on the top of his shoulders but on the sides like a regular figure. This was done on the vintage figure probably to help facilitate the action feature, but I figured it was worth pointing out the difference. 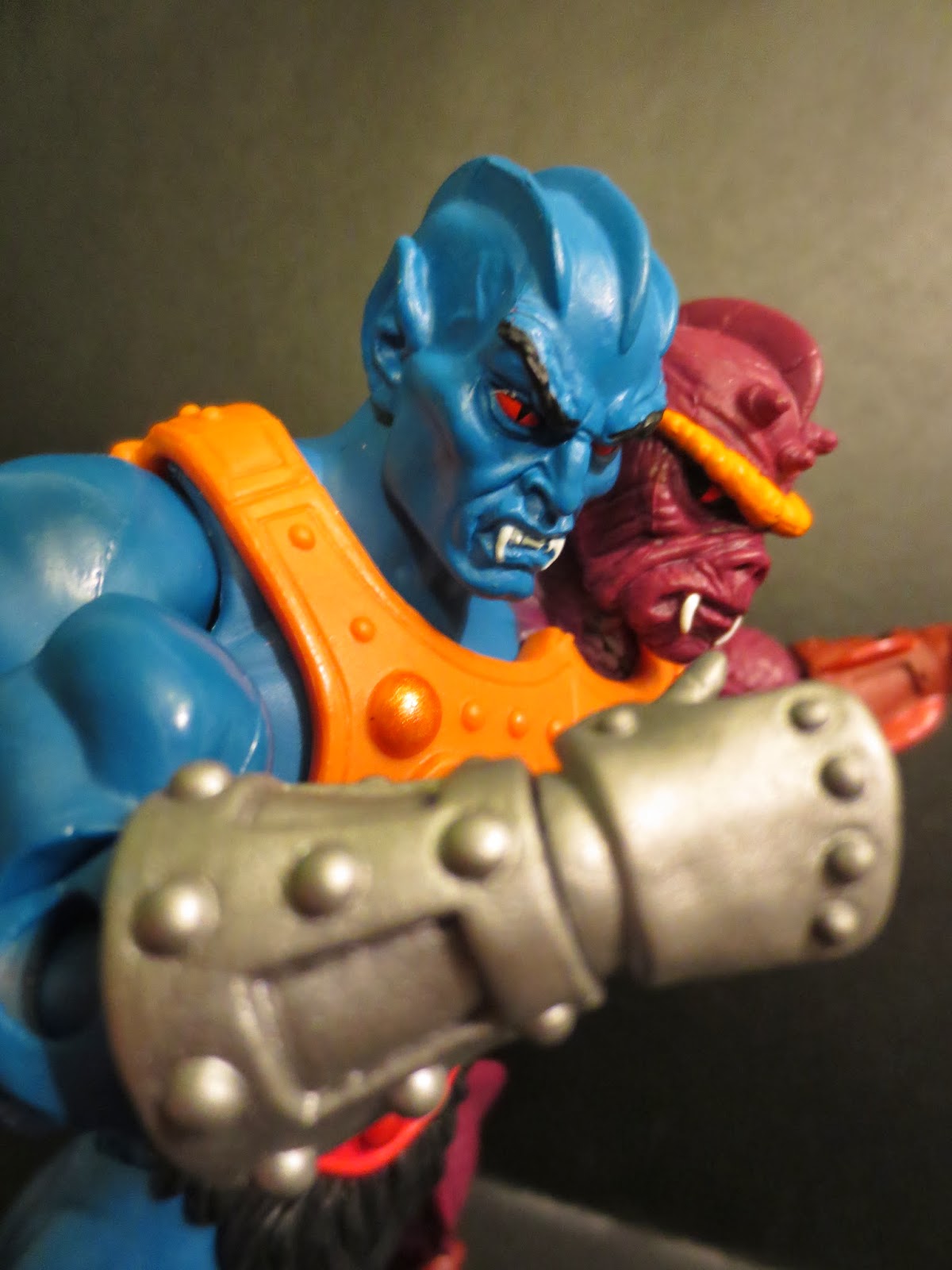 I really like Two Bad's sculpt: he's incredibly unique looking and nearly every bit of the figure is covered with cool, unique detail. Tuvar is the blue head and he really has a wicked look to him; I love the ridges on his head and his pointy teeth. He's really quite evil looking. His body is pretty normal and smooth and he wears a studded metal glove and boot. His hand actually looks like it's wearing a gauntlet, which is incredibly cool. Baddrah (the purple head) has spinier, more reptilian skin. He has a wierd brow and long, curved fangs. His boot and glove are much more ornate and look to possibly be composed of a leathery material. The boot has lots of straps and spikes on it while the gove has armored ridges and what looks like a knuckleduster across the fingers. 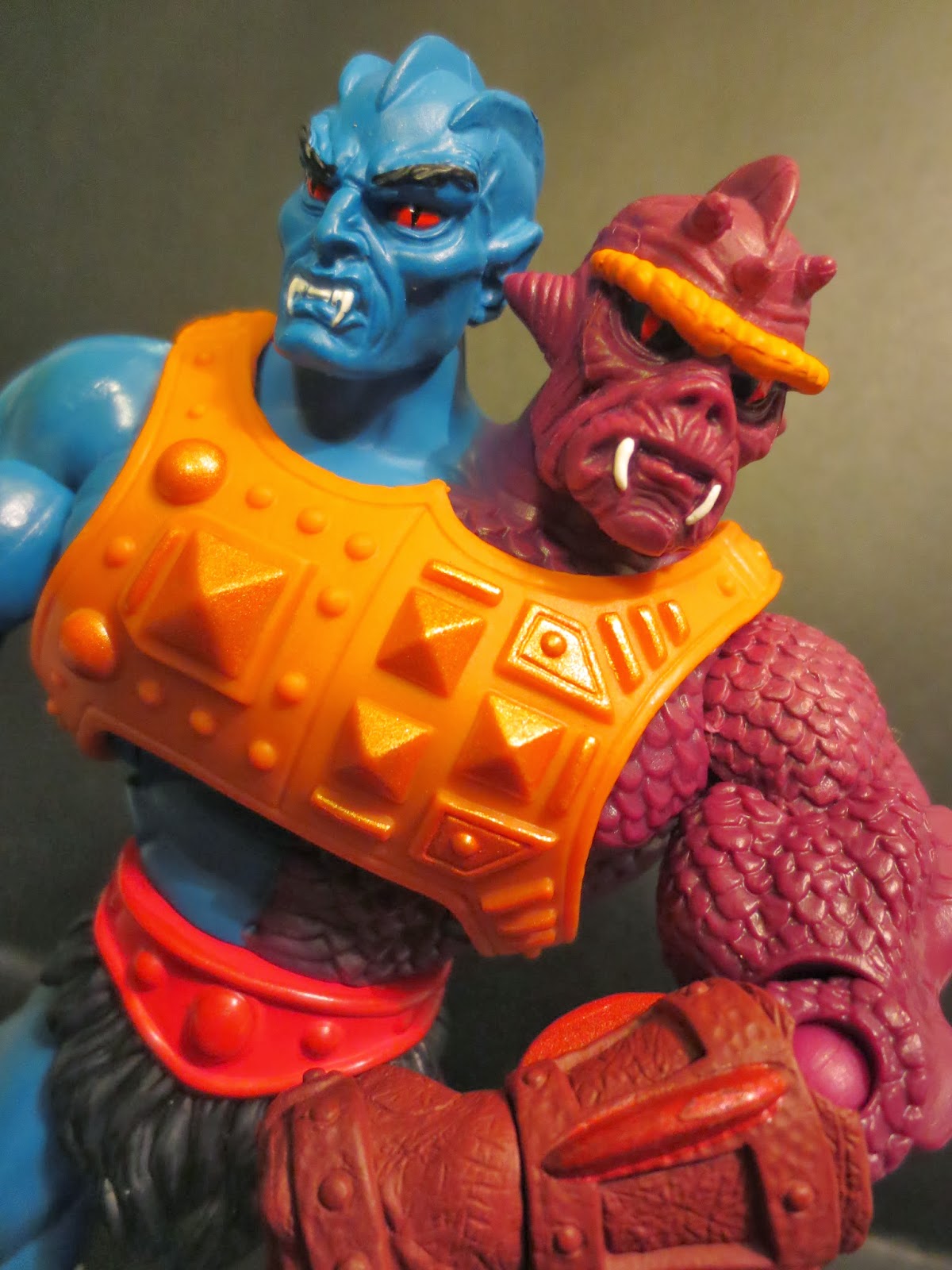 One of the interesting things about Two Bad is the way Mattel handled his chest. He obviously has a new chest piece, but strangely Mattel or the Four Horsemen chose to divide the character's two halves straight down the center. It's very neat and clean as opposed to the more organic designs of the original and 200x figures. I'm not really sure why this design choice was made, but it definitely seems a bit strange; it's not as if Mattel could reuse this torso for another character, could they? 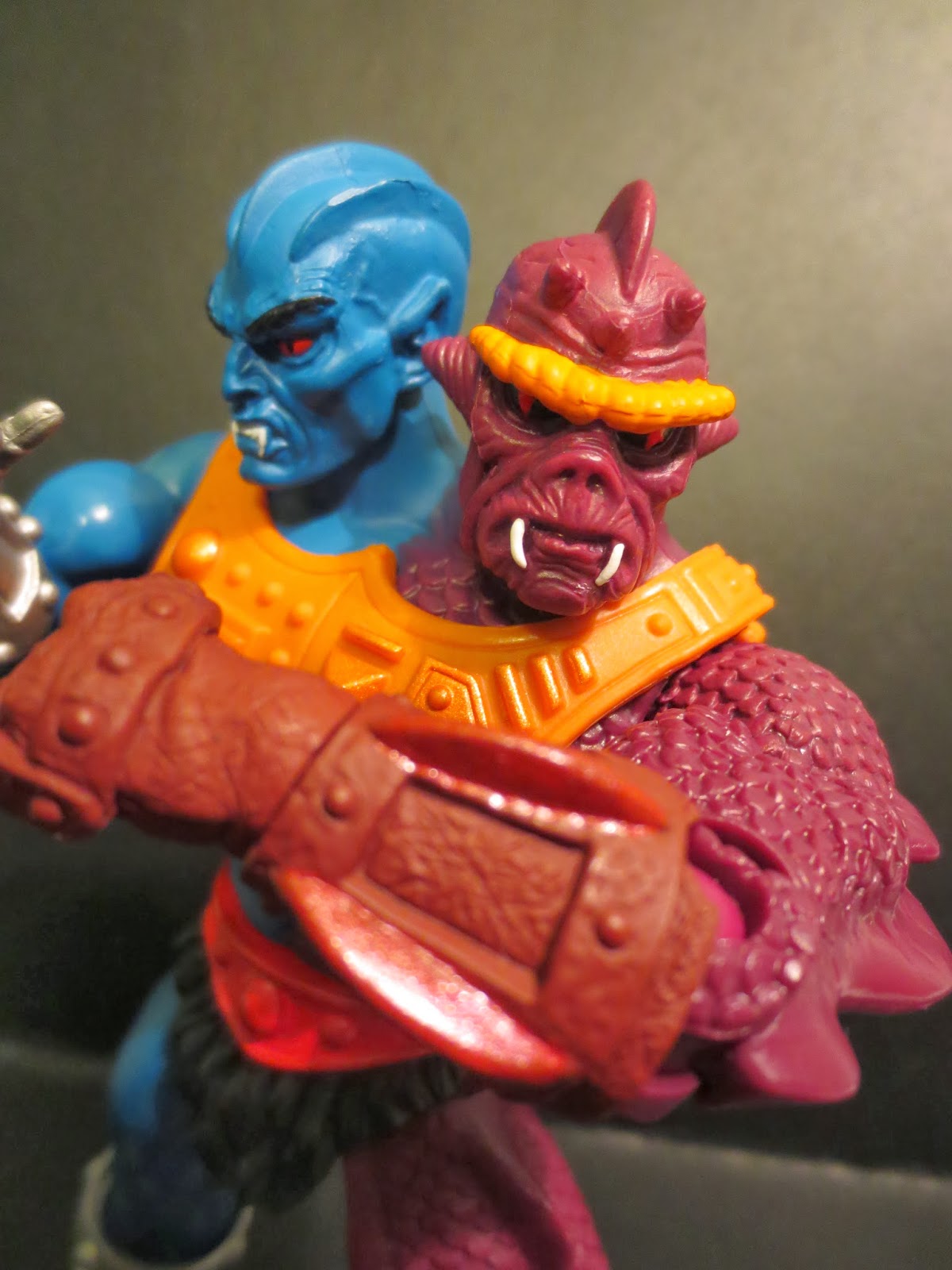 The paint work between the two bodies is fairly clean. While the purple side looks to be impacted a bit by the blue plastic at the edge, this might be intentional. It doesn't look bad. Everything else is neat, clean, but fairly ordinary. While Baddrah's glove and boot have some red highlights, there are other elements of the figures that I would have liked to have seen highlighted too, such as the straps on the boots. The paint is well done; nothing we haven't seen before but nothing that detracts from the figure. 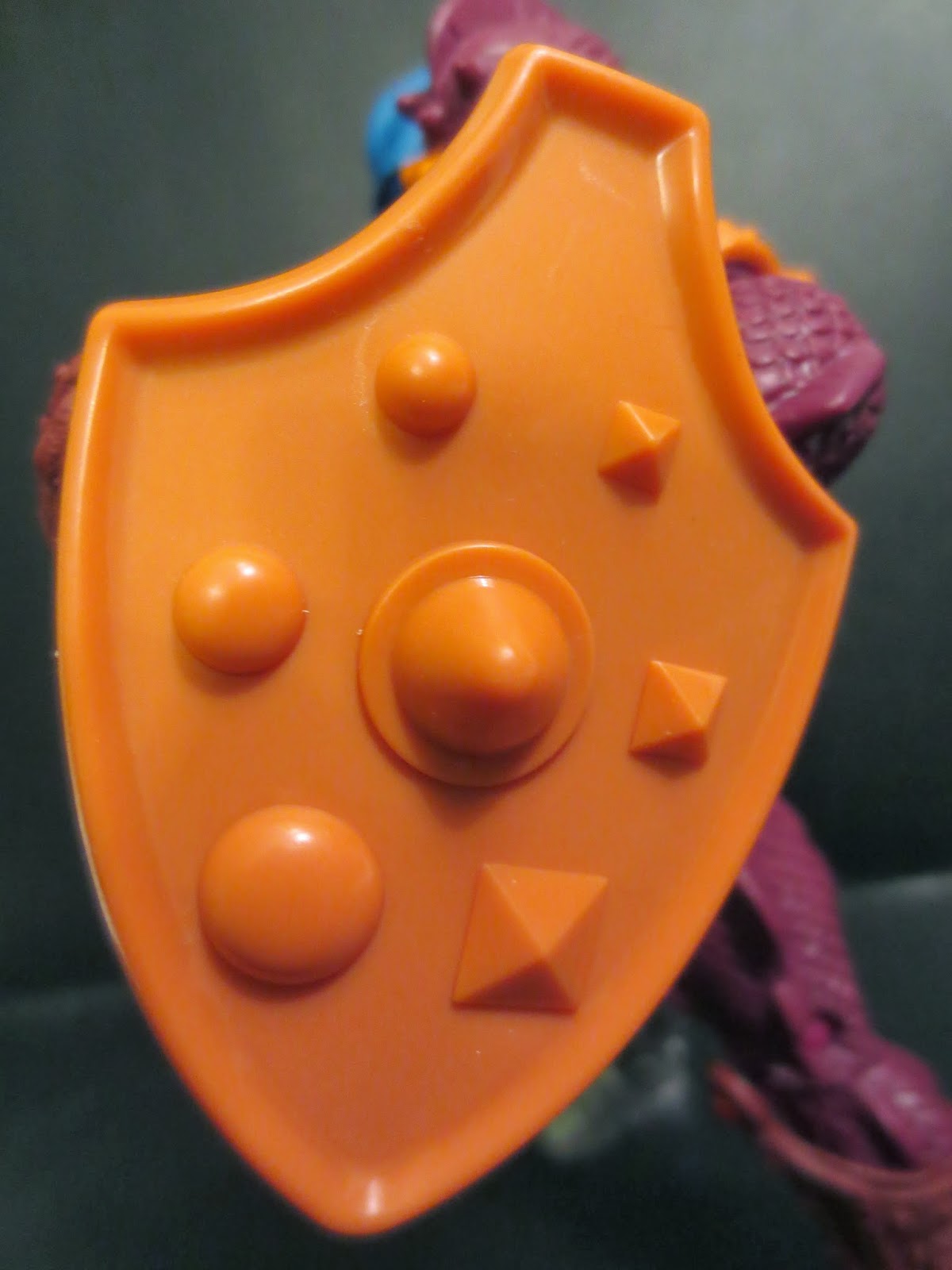 Two-Bad comes with a removable harness and two accessories: his vintage shield and his 200x mace.  The harness looks fine and is covered with little details that are given orangish gold paint details. They're easy to miss since they match the rest of the armor, but they're there. The two accessories, though, really aren't as impressive. Let's start with the shield: it looks fine but features no additional paint apps on the spikes on the front. It also attaches to the arm in a very awkward way. The wrist cuff doesn't fit over anywhere except on of the ridges on the Baddrah side of the arm and, even when it's on correctly, it has the tendancy to go flying off. It's just a poor design. 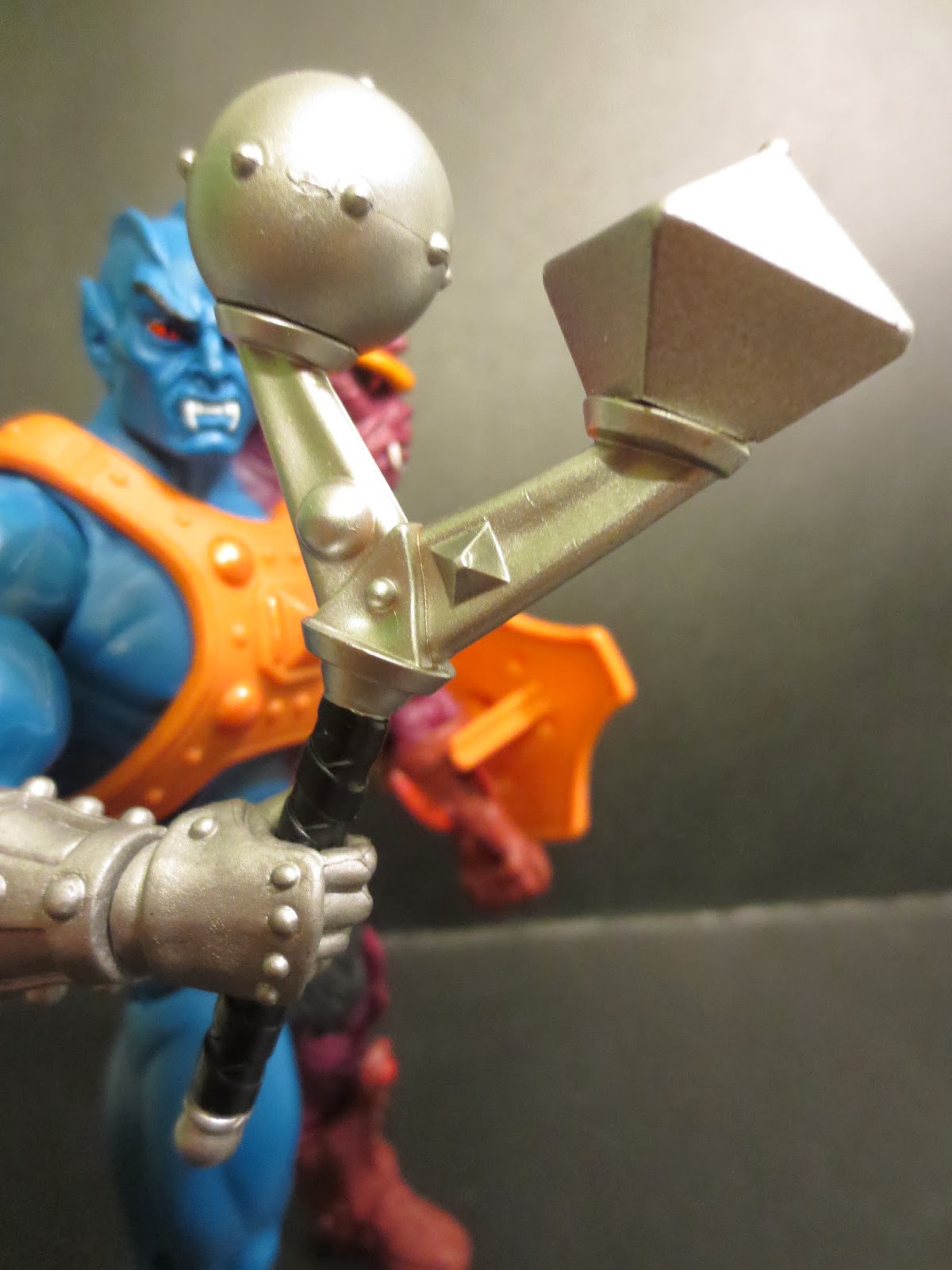 The mace isn't as bad, but it's a very soft sculpt. It fits securely in Tuvar's right hand and does feature a black paint app on the handle. It does not open and close like the 200x mace, though. 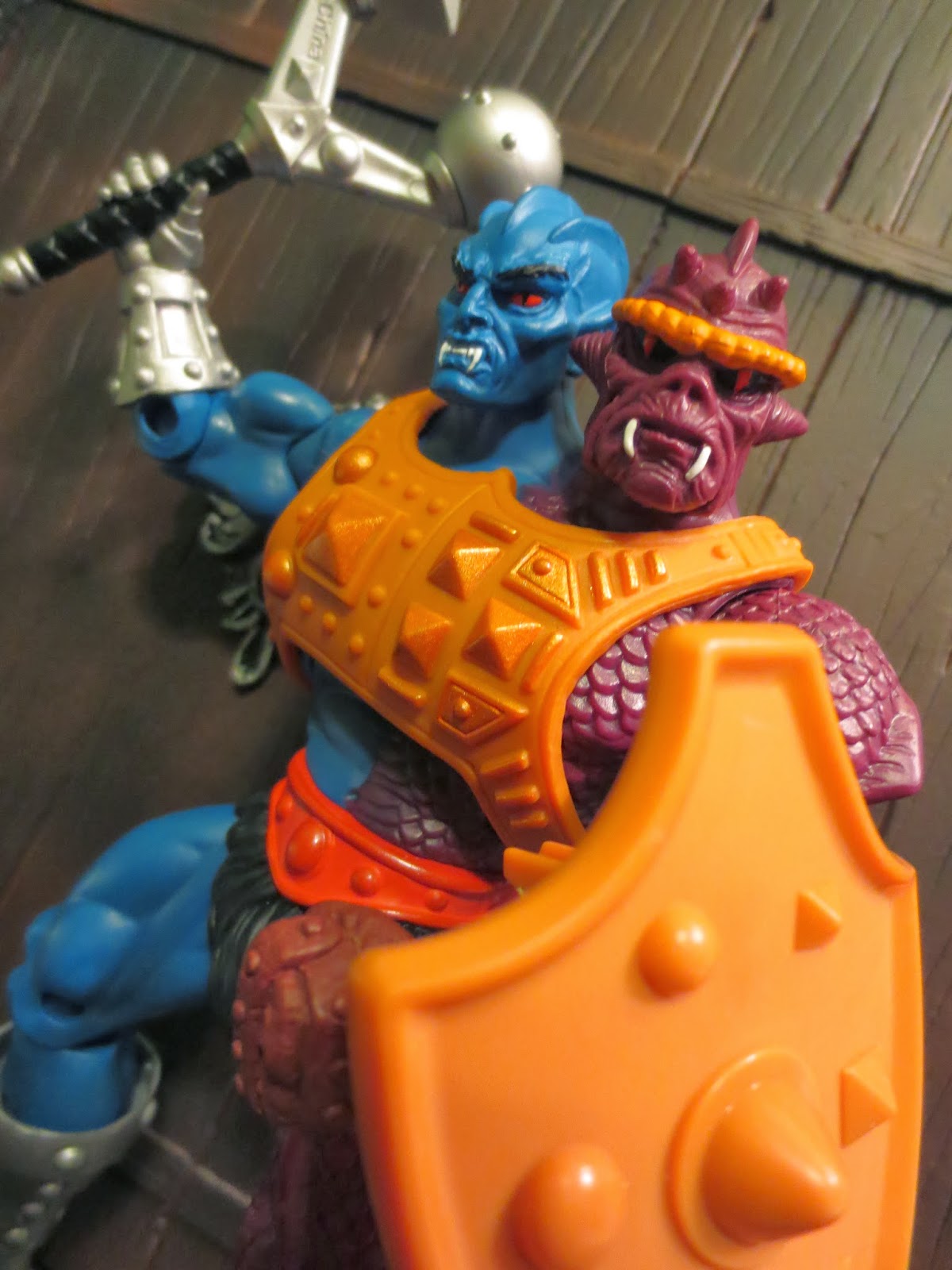 Overall, Two Bad is a pretty nice. He really does look great with a unique body design, excellent sculpting, and some fine paint work. The design decisions, such as having his heads close together and choosing to have a neat, clean separation between his two halves, do seem kind of strange, though. Not terrible, just unusual. His weapons are kind of lackluster, too. Overall, I'm giving him a Good and a 1/2. If you've hung around and collected MOTUC this long then there's no way you don't want Two Bad, but he does have some questionable decisions in his design. Sometimes two heads are better than one, but I guess not always, as there are plenty of single headed figures who have wowed me more than Two Bad.